Rewards of photography in unkind weather

Taking photos in fine sunny weather is easy, and everybody does it. Bad conditions can be more difficult for the photographer, but can produce the most interesting or dramatic results. Here are some examples of being rewarded for going out with a camera in the sort of weather that keeps most people indoors. 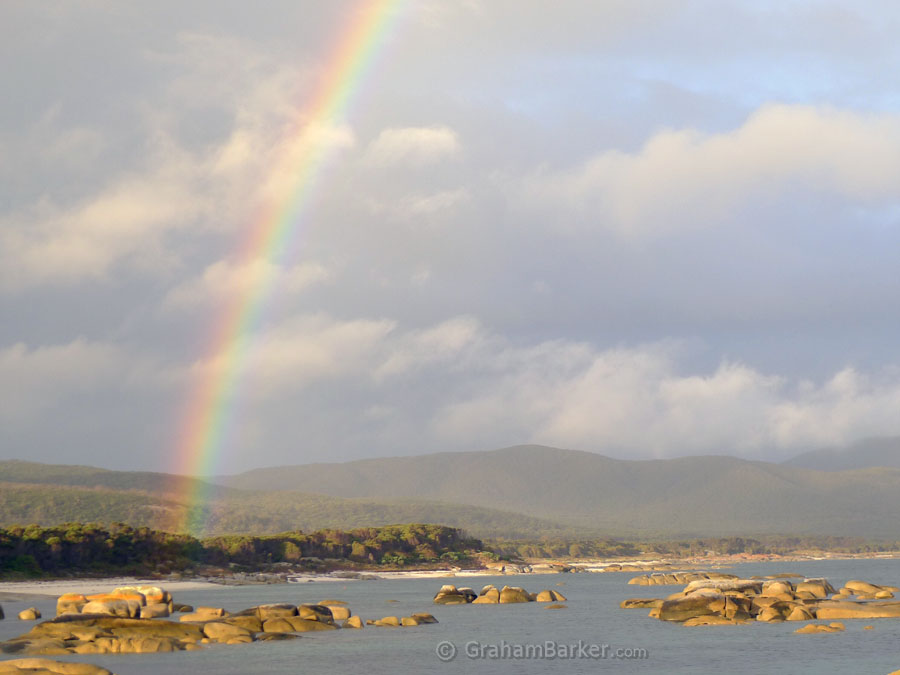 Everyone likes a good rainbow, but you don't get rainbows without rainy weather. For the outdoors landscape photographer, that can mean getting wet.

Once I visited Sawyers Beach on Flinders Island - on a beautiful bay with picturesque rocks dotting the water, just begging to be photographed. The only problem was that as soon as I arrived, the rain set in. It was tempting to leave, but I stayed ... hoping the late afternoon sun would break through the cloud and light up the warm coloured granite against a backdrop of dark stormy sky.

Forty minutes later my patience was rewarded when the sun broke through, as it usually does (eventually). The lit-up rocks were complemented by a bonus rainbow at no extra cost. Sometimes it pays to think ahead and hang around. 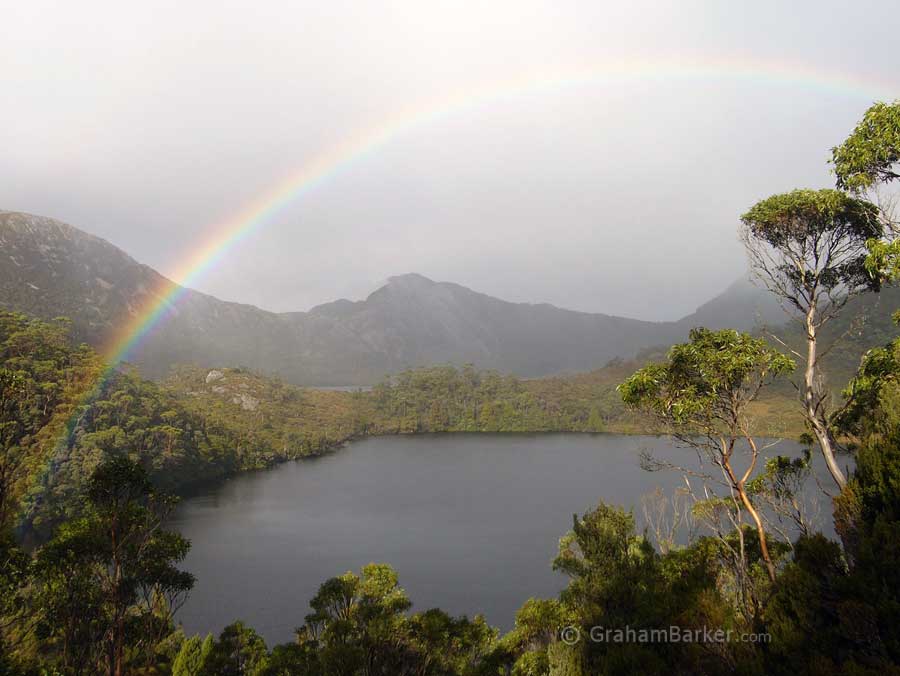 At other times rainbows are completely unexpected. Like the day I hiked around the Cradle Mountain area intending to experience and photograph the snowfall that was forecast. The snow never eventuated; instead I endured drenching rain and dull overcast skies. Then the sun popped out for thirty seconds and I enjoyed a lovely rainbow over Lake Lilla ... an unexpected reward for staying outdoors in wet conditions.

Even without rainbows, rainy weather can produce some photogenic effects that add mood or drama to a landscape. You might just have to endure wetness or poor visibility while waiting for the right moments.

The panorama above is from the top of Mt Frankland in WA. I got rained upon while up there, but was rewarded with ever-changing vistas of winter rain showers passing by. To me, this is more visually interesting than the plain blue sky and harsh sunlight that is more typical.

In a similar way, this photo of a raincloud approaching Mt Trio in the Stirling Range of WA has more drama than the same view in empty blue skies. The cloud was the precursor of an approaching cold front. When it passed where I was sitting, it brought heavy rain and hail ... but that's often part of the package if you want landscape shots with interesting weather. 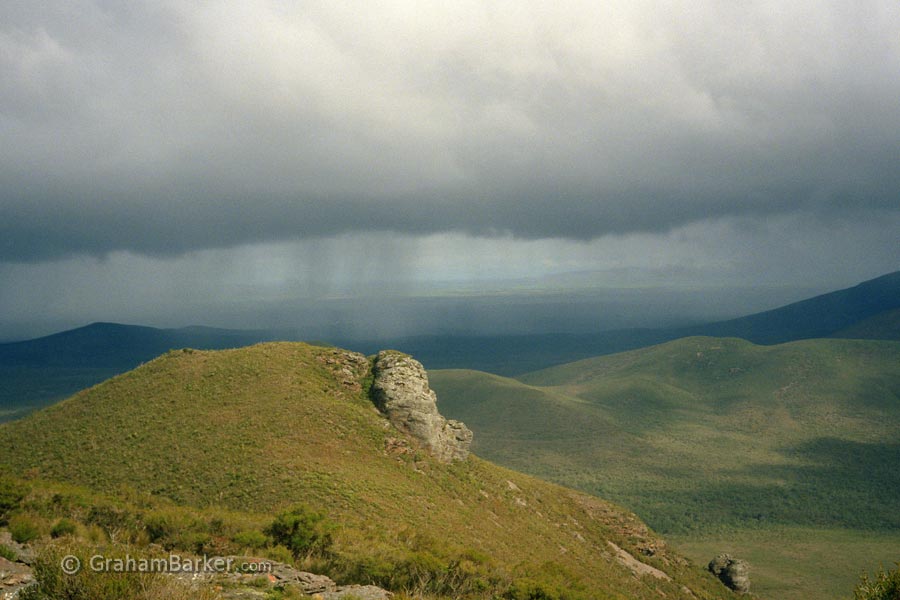 Rime is a build-up of ice on the wind-facing side of objects which are exposed to strong, freezing, moisture-laden winds. The results can be photogenic, but the conditions in which rime forms can be inclement in the most brutally uncomfortable ways.

My most memorable rime experience was in Western Australia of all places. The summits of the Stirling Range, North of Albany, usually get one or two light and short-lived snowfalls per year. On one such occasion I drove there overnight and climbed Bluff Knoll in time for sunrise. It was snowing on top, the temperature was about one or two below freezing, and the winds gusting around 80 km/h made it hard to stand up. In that wind, even ice crystals hitting my face felt abrasive. 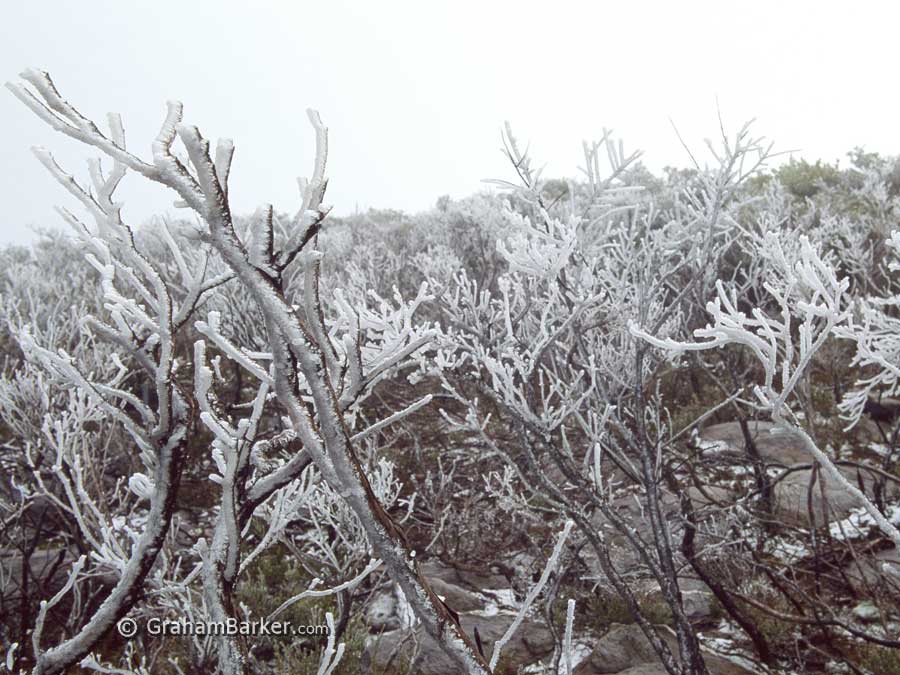 The snow was disappointing, but the rime was amazing. Supercooled moisture in the air froze on contact with all the chilled vegetation, forming a clear icy coating on the side of every branch and twig. It was a beautiful sight in the fog-filtered light of the rising sun, and an awesome thing to experience - especially in WA where it is so rare and seen by so few. Venturing out in such weather was challenging, but I'm glad I did.

Rime can be seen much more easily in the mountains of New South Wales and Victoria. It forms in savage conditions, but in the higher places it can survive between storms and build up into something impressive. Hiking or skiing away from the ski areas can reveal awesome ice-blasted rock sculptures, particularly in the Ramshead Range near Thredbo. While this can be done in sunny weather, it still means going out in the cold in protective clothing. 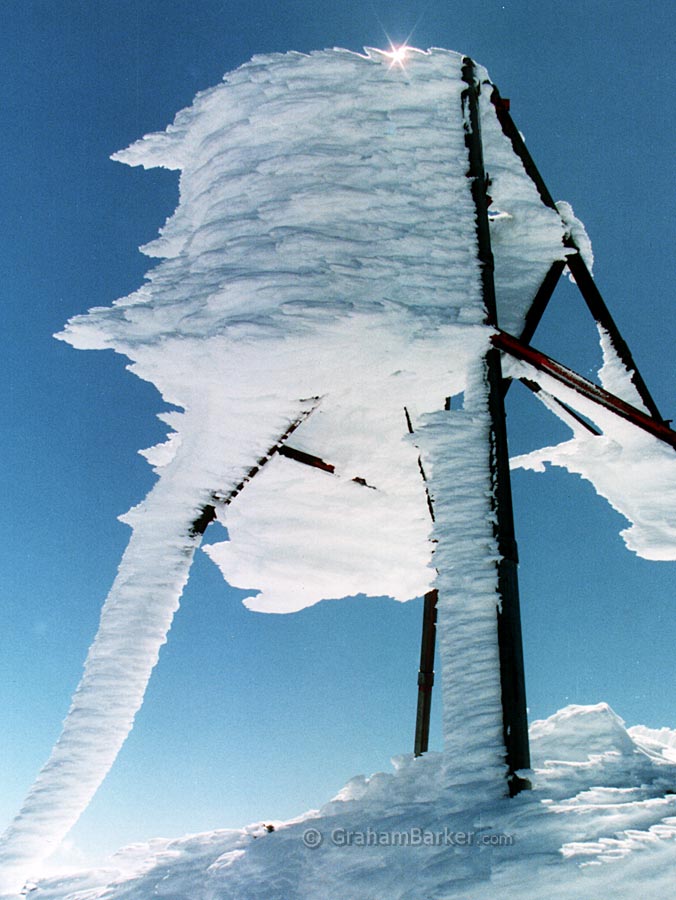 Snow can transform ordinary landscapes into winter wonderlands. However, in Australia, the snow has often barely settled before it starts consolidating and thawing. To get photos of snow when it is dry, fluffy and coating the branches and leaves of trees, you have to be quick. That means going out with a camera before the snowing has stopped.

These photo are of snow-coated forest near Tasmania's Cradle Mountain. The first shows the wintry splendour of a fresh snowfall ... when snow was still falling, and with temperatures still below freezing. Every surface capable of holding snow has some snow on it.

Soon after, the snowstorm had passed. Sunny periods increased, temperatures crept up; the thaw set in. Within just a couple of hours most of the snow coating the trees and shrubs had melted, and the snow on the ground was reduced to patches of wet snow and slush, as in the second photo. 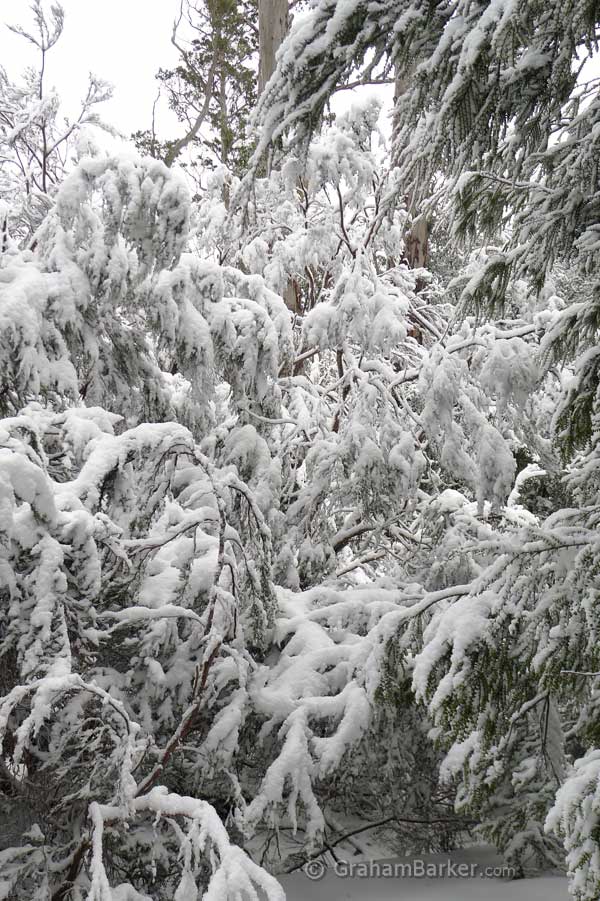 Snow in two nearby parts of the same forest: freshly fallen (above) and just a few hours later (below) 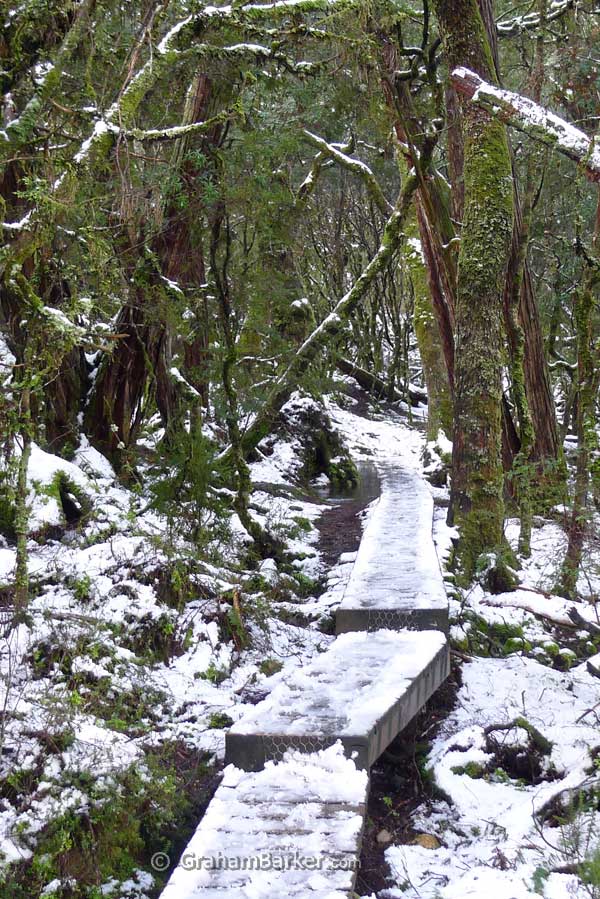 By the time the roads were cleared and visitors arrived to see the snow, the best of it was gone. Yes, there was still snow to be seen, but not the extensive frozen magnificence of the fresh stuff. That's a reward for those who venture outdoors before the snowstorm has passed.

Unkind weather isn't just of the wet or cold variety. The hot and humid weather associated with thunderstorms can also make being outdoors somewhat uncomfortable. It can also provide good photo opportunities.

There was one stinking hot and humid Perth day when I didn't want to leave the air-conditioning. But when I saw a nice thunder cloud developing nearby I went out with a camera to find a viewpoint; the result being this photo of a massive cumulonimbus towering over the city buildings and freeway. 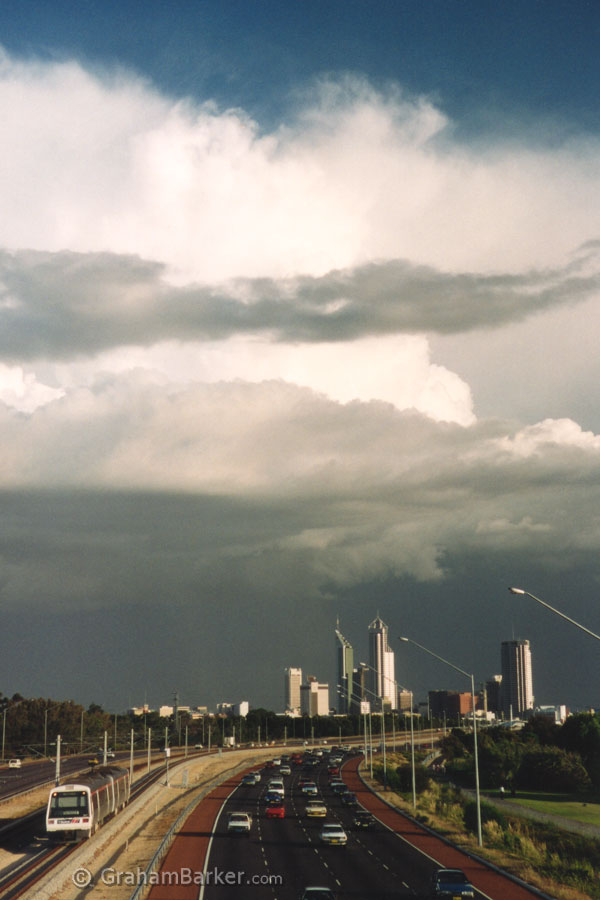 I don't cope well with heat, but was glad I made the effort to get this shot - so different from the ubiquitous photos of Perth under a featureless blue sky. Capturing photos of lightning is another possible reward of thundery weather but this so far has eluded me.

When the weather outside is sufficiently inclement or uncomfortable to make you want to stay indoors, that may well be a good time for keen photographers to go outdoors. With a camera … to capture photos that others are missing, because they're avoiding the unkind weather.