A large Tasmanian island with unspoiled coastline and great cheese, reached by a vehicle ferry

Bruny Island is one of those places which most visitors to Tasmania would like to see, but don't quite get around to. That's how it was for me - my first Tasmanian trip was with friends whose time was limited, and on subsequent trips I left it to the end, and ran out of time to visit an island. When I finally made it to Bruny Island, I was glad I had made the effort. It is a beautiful piece of Tasmania ... especially if you like cheese. 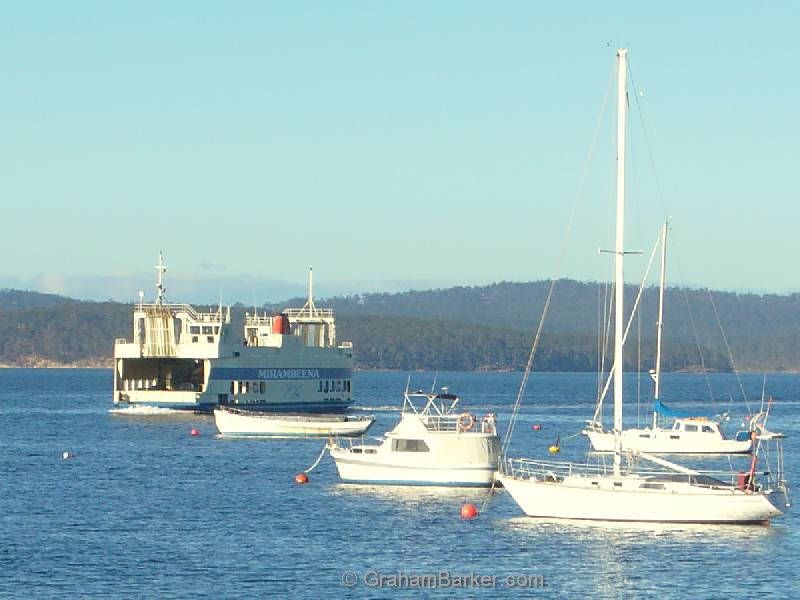 Bruny Island isn't all that hard to get to. From the town of Kettering, just 40 minutes south of Hobart, it is a smooth 20 minute ride on a vehicle ferry, of which there are between 9 and 11 trips daily each way. This does require a bit of planning, but is more of a psychological barrier than a practical one. Although there is also the cost of a ferry ticket to consider.

Upon driving off the ferry I found myself mid way up the side of the northern island. Bruny Island is actually two islands, joined in the middle by a very narrow neck of land known as ... The Neck. Not a very imaginative name, but it fits. It was late in the afternoon so it was towards my accommodation at the neck that I headed, but not before visiting a wonderful lookout.

On a high sand hill at the northern end of the neck is a viewing platform - the Truganini Lookout. The long trek up many, many steps is worth the effort, because the views are panoramic in all directions. It's especially good on a clear day, but if you get to see it early or late in the day as I did, in the "magic hour" when the sunlight is more golden, then that is even better. This is a place to linger, which is what you'll want to do if your knees were as tired as mine after all the steps. There is also a penguin rookery nearby.

South Bruny Island and The Neck from Truganini Lookout

From the lookout I drove my rented campervan to the Neck Reserve campground. Facilities were basic (rainwater tank, a toilet, and pleasant campsites among the trees) but the location was excellent. Being among shady trees near a magnificent deserted beach, with cheerful birdsong and the sound of crashing waves in the distance, was a beautiful introduction to the natural splendour of Bruny Island.

Next morning I took advantage of some perfect weather and indulged in one of the island's main drawcards - a trip with Bruny Island Cruises. I've written about this on another page so won't repeat the description here. Suffice to say it was magnificent and lived up to all expectations; this boat trip alone being a good enough reason to come to Bruny Island. Afterwards I went for a scenic drive before arriving early at my next accommodation.

The Captain Cook caravan park looks out over the sheltered north-facing beach of Adventure Bay, and is a great spot to stay. As much as I love the bush campgrounds, one occasionally needs a shower, and electricity to recharge various batteries. This caravan park served these needs very well, and set me up for some more exploring after which I returned to the campground at Neck Reserve. 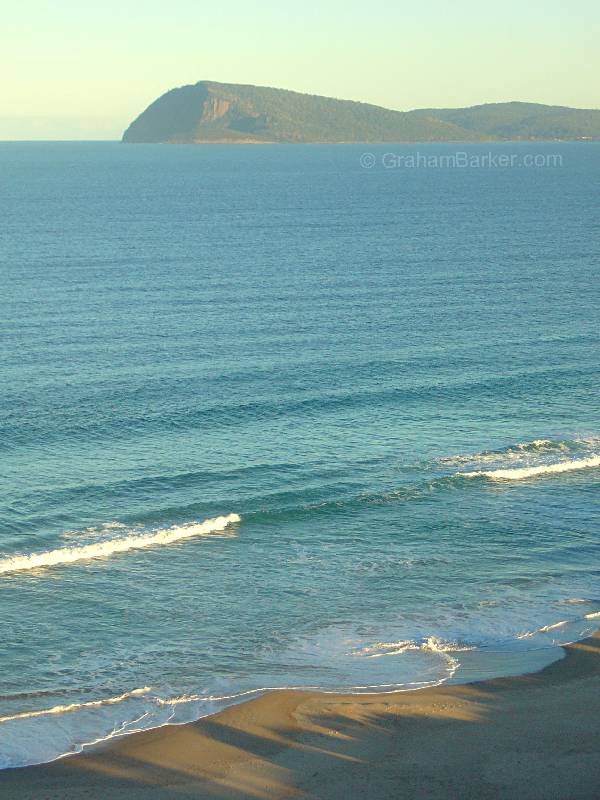 The drive to the far south end of the island was lovely. Passing over lush forested hills, it became apparent that the larger southern chunk of Bruny Island has a damper climate than the northern end, which is less exposed to rain bearing winds. Among the hills and bays sit south Bruny's two tiny towns of Alonnah and Lunawanna. To say these places are quiet, unpretentious and non-touristy would be a great understatement. Personally, I love coming across small out-of-the-way towns which remain their true selves; which haven't tried becoming something different in order to attract tourists.

The main road south - and there is only one - eventually leads to the South Cape Bruny lighthouse. This is as far south as you can go on Bruny Island, and is almost as far south as Tasmania's most southerly point. While the lighthouse is not open to visitors, the area around it is, and the panoramic vistas of rugged coast from this spot are worth driving for. South Bruny's cliffs and islands can be pleasing on the eye, and on a clear day the coast and mountains of Tasmania's far south provide a gorgeous backdrop. 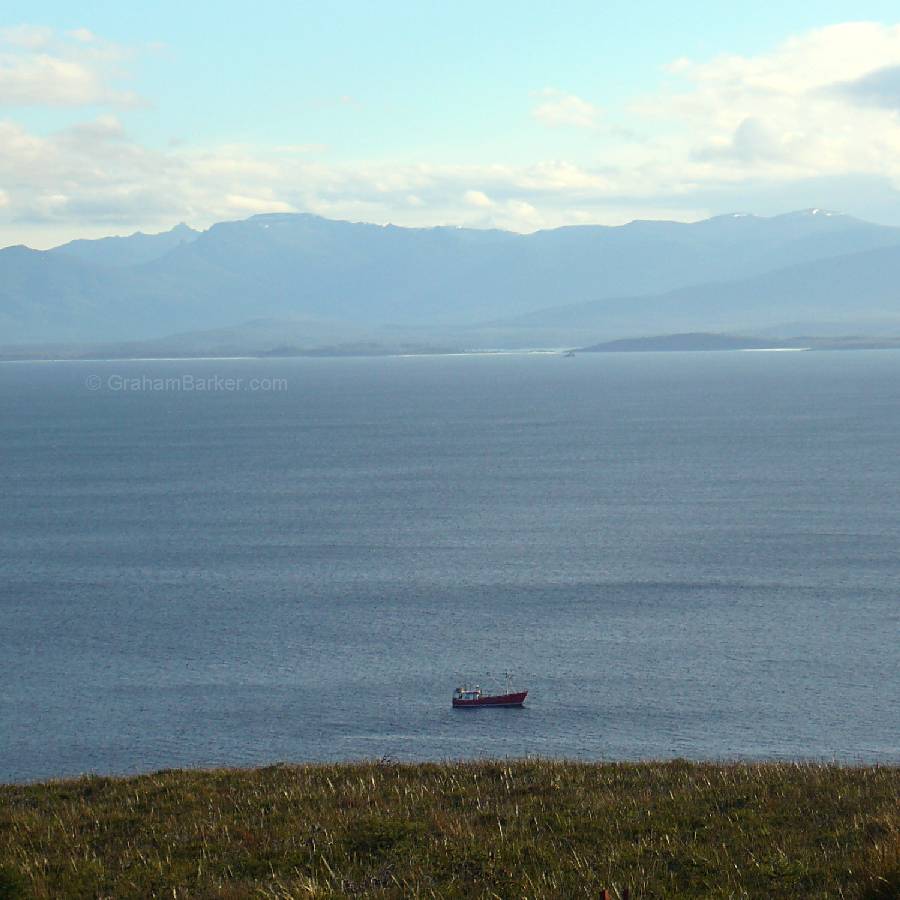 The coast of mainland Tasmania from near the Cape Bruny lighthouse

Also at the south end, near the lighthouse, is the South Bruny National Park. A 5-7 hour circuit walk of the Labillardiere Peninsula looked inviting, as did the camping area at Jetty Beach, but I'm saving these for another visit. Instead I checked out Cloudy Bay, a beautiful south-facing bay which is a surfing spot with a place on Tasmania's competitive surfing calendar. It was calm and peaceful when I wandered around its deserted beaches, but a memorial to a lost surfer was a reminder that Cloudy Bay faces the wild Southern Ocean and needs to be treated with respect.

On the way back north I tried the road across South Bruny's high interior, aiming to walk the track to its highest point. Unfortunately this hilly gravel road was a little damp and slippery. In my own car I would have continued, but in a hired van the implications of even a small mis-hap could have been expensive or complicated, so I played safe and turned back. This turned out to be the only road on Bruny Island which caused me any concern in a two-wheel drive vehicle, and in drier summer weather it is probably fine.

Eating places on Bruny Island are a case of quality over quantity - there aren't many, but the ones I tried were good. The Hothouse Cafe, between Adventure Bay and The Neck, is in a converted hothouse. It may be an unconventional setting, but the food and the coffee were both great, and the views were lovely too. The highlight for me, however, was a place with some very special cheese. 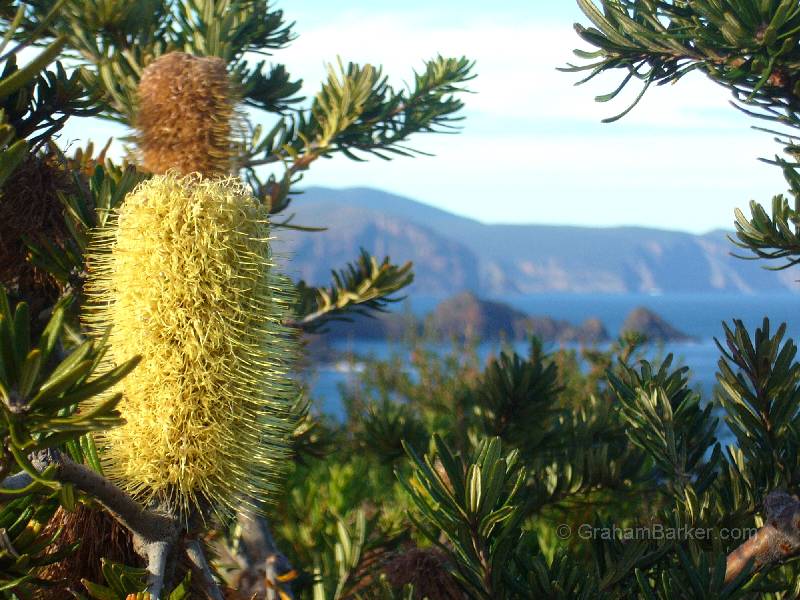 My enjoyment of cheese was reinvigorated when I made a couple of visits to the Bruny Island Cheese Company, north of The Neck. Cheese maker Nick Haddow is a guru of the quality cheese world, having worked with and learned from the great cheese makers of Europe and other parts of the world. I got to chat with him as he described with pride the great care he puts into hand-making the various cheeses I sampled. His devotion to excellence was inspiring, and the cheeses had that extra something that drove me to take away more that I really needed for my time in Tasmania. I enjoyed every bit, and have since signed up for his cheese club and had some shipped home.

After exploring the north end of North Bruny Island - less forested, drier and more agricultural than the south - I took the ferry back to mainland Tasmania. I was glad to have finally made it to this great island, and resolved to include it on future trips. One place on the "next time" list is the Get Shucked Oyster Farm, which is near the cheese maker. Eating organic-quality oysters plucked fresh from the pristine waters of Bruny Island's Great Bay seems like a good way to experience them for the first time. And if I don't like them, some of Australia's best cheese is just down the road.

Some rental companies are happy for you to take their vehicle across to Bruny Island ... but some explicitly forbid it. If they learn that you've gone there when you're not supposed to, it would be seen as a breach of the rental agreement. This could invalidate the insurance ... possibly for the whole rental period, not just while on the island. So if you're thinking of renting a vehicle and wanting to go to Bruny Island, make sure you read the terms and conditions (or ask the rental company) so that you're aware beforehand of where you can and can't go.

East Cloudy Head and the southern end of Bruny Island, from near the lighthouse 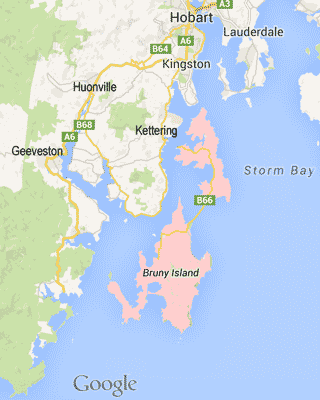