One attraction promoted to King Island visitors is the Calcified Forest - the artistic stony remnants of a forest long gone. I set off to check it out, and see how it compared to similar features I've seen elsewhere. 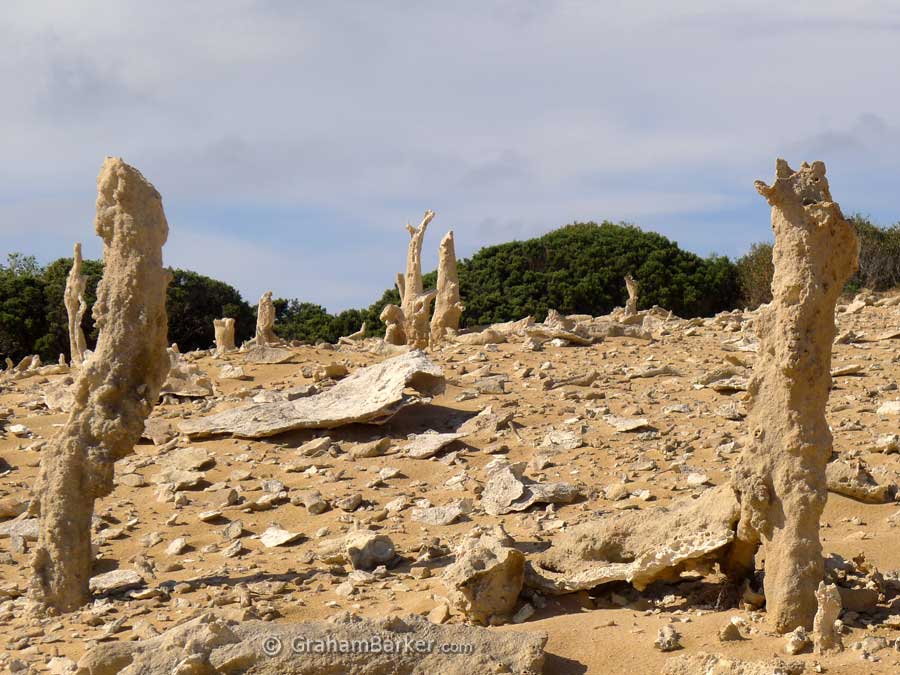 The drive starts near the wind farm outside Currie, with a turn onto the road which heads to the south end of the island. Not surprisingly, it is called South Road. The bitumen runs out, then it dwindles to a minor road, and then you turn onto the Calcified Forest and Seal Rocks road: a sandy track that is about as minor as you'd want it to be in a hired vehicle.

I felt the wheels lose traction briefly in soft sand and damp boggy bits, and wondered if I would get stuck. Then I remembered that the woman I hired the car from had assured me that all roads on the map she gave me - other than a section near Stokes Point - were okay to drive. She turned out to be right: every King Island track I drove on was okay. However some, like this one, are a little soft and should be driven with care. 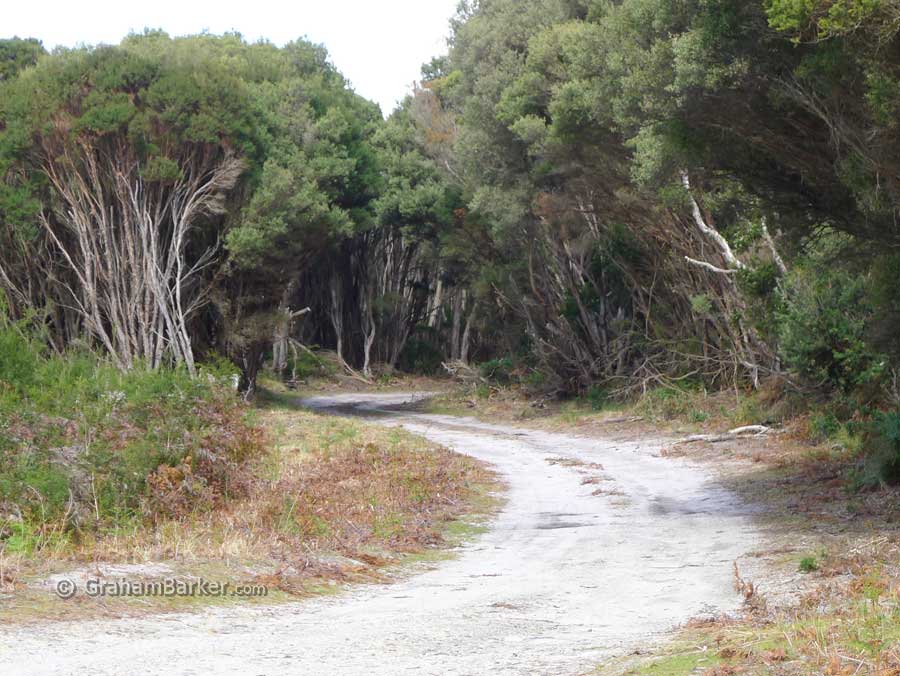 The road to the Calcified Forest

Arriving at the tiny parking area presented me with a surprise - three other cars! I was accustomed to being the only person at King Island's points of interest, or maybe sharing with one other vehicle. To find three cars, and to bump into the six people occupying them, felt comparatively crowded.

The barely-adequate tracks to primary attractions, and the fact that six people felt like a crowd, serve to illustrate something I like very much about King Island: its tourism is on a small scale.

Once the other visitors left I had the nature reserve all to myself. From the parking area it is a gentle 800 metre walk through pleasant shady bush to the forest. Mostly it is sheltered from the wind, and accompanied by the songs of birds who hang out in what is one of the island's few substantial tracts of native vegetation. 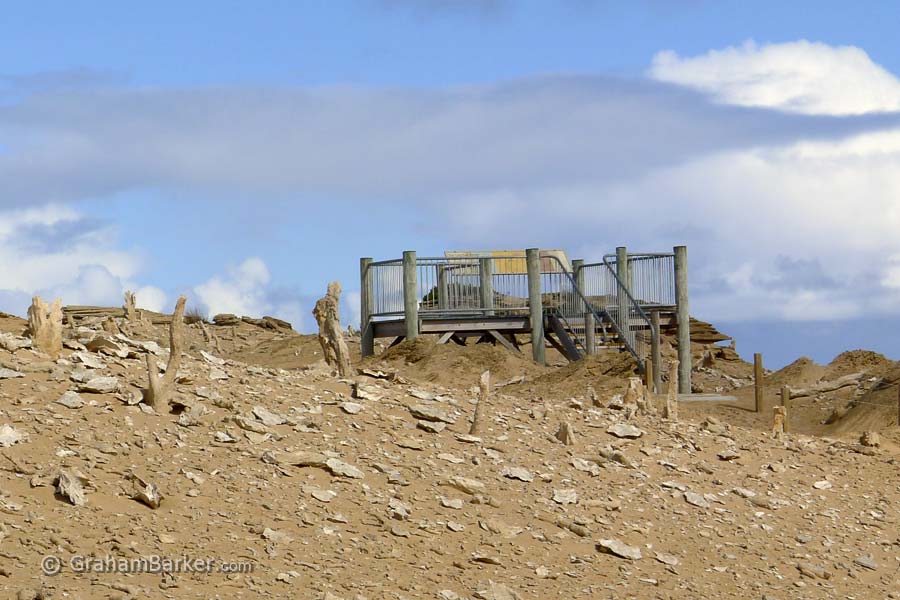 The Calcified Forest struck me as both disappointing and wonderful. The disappointment arose because the area was much smaller than I imagined, and there were fewer large bits of calcified tree than I had hoped for. Many larger pieces have been removed as souvenirs over the years ... which is why the walking track is now contained within fences and leads to a fenced viewing platform.

Once I adjusted my expectations, I began to appreciate what I was seeing. Casts had formed around the roots of trees which had later all died, with the surrounding sand eroded by wind around 7000 years ago to reveal the root casts. Good surviving examples of this are uncommon.

When you stop to ponder the process, and the interesting contorted shapes that are left behind, the odd-looking structures can appear artistic and even beautiful. After a period of pondering from the viewing platform, I began to notice more of the small calcified tree parts. Some, with distant sea or sky as a backdrop, looked striking. 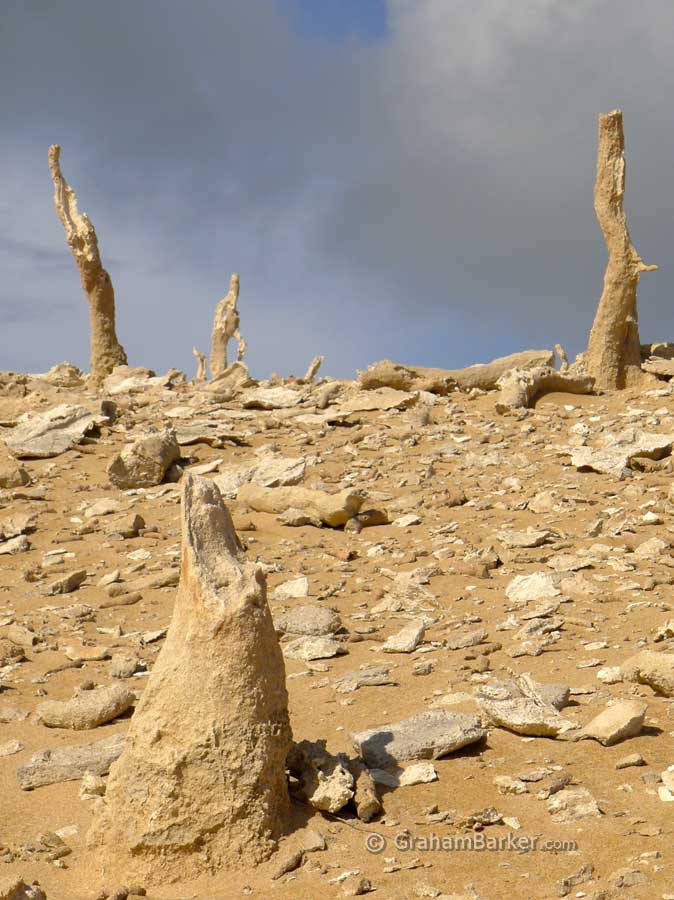 Naturally I wanted to move around and seek the best viewpoints, but I was thwarted by the fences. They may well deter casual damage and pilfering by keeping people on the path - a worthy goal - but they also restrict photography. Unless one jumps the fence of course. Ten years ago I might have done that in search of better photos ... but as age increases, flexibility does the opposite.

Returning to the small patch of firm sand which is the car park, I noticed there was also a covered picnic area and a toilet. The tables looked like they hadn't been used in a while, and the best I can say about the toilet is that it serves a purpose. Still, it's a good spot for a snack of King Island cheese, sheltered and surrounded by bush.

King Island's Calcified Forest reminded me much of what I call the Little Pinnacles of Cape Leeuwin, near Augusta in Western Australia. Similar structures, of a similar size and extent, revealed by eroding bare sand. Yet while the King Island version is promoted to tourists, the WA equivalent is barely mentioned in tourism literature and not even signposted.

The Calcified Forest on King Island is best appreciated by not expecting too much. If you let the promotional prose paint grand pictures in your imagination, then the reality may seem a little small. But if you visit with an open mind, enjoying the whole environment and taking time to observe the details, it is a fascinating and distinctly different landscape. Well worth the dodgy roads. 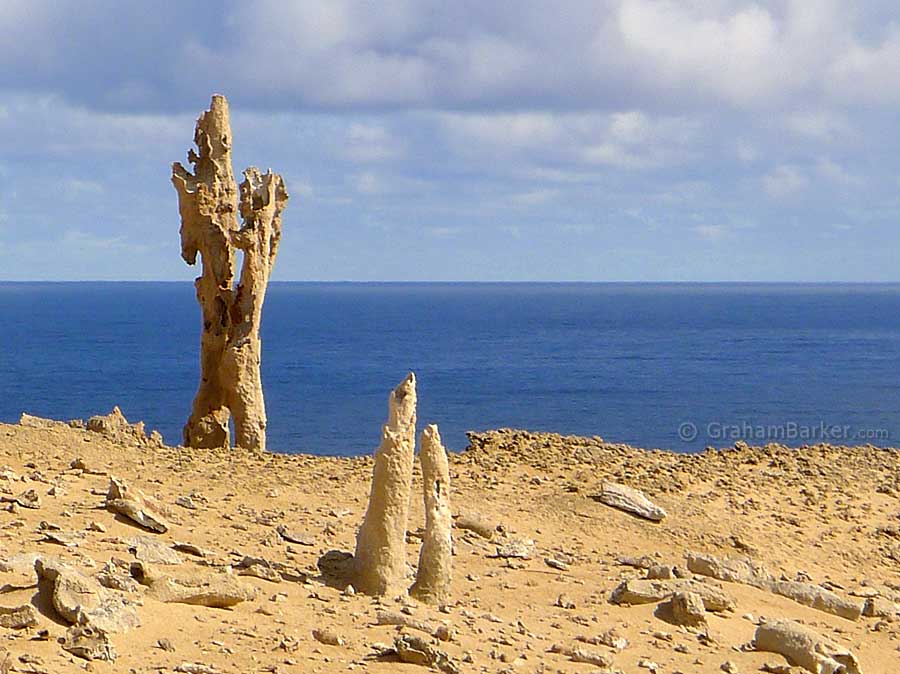