Playing your own music in rental vehicles

Gadgets and methods for playing digital music in hired vehicles, and their practicalities 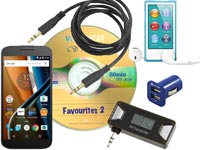 Listening to favourite music is a great way to make long drives more enjoyable, and scenic drives memorable. However the actual method of playing your own music in rented vehicles is a detail sometimes overlooked when planning a trip. I've tried a few ways, and gadgets, and this is what I've found.

For the purposes of this article I'm talking about music in digital formats like MP3, which is ideally suited to travel. I’m also referring to the hiring of cars or campervans in Australia and New Zealand, which would normally involve a vehicle made within the last decade or so.

A smartphone can seem like an obvious choice if you’ll be taking one with you on holiday anyway, and already have MP3 music stored on it. However, there are some things to consider.

Firstly, you need a way to get the sound out of the phone. Possibilities include: 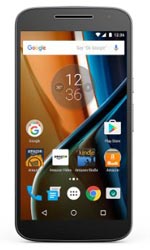 Secondly, it needs to be charged - and a smartphone's battery will drain a lot faster when playing music on a long trip. Keeping the phone plugged into into the car cigarette lighter socket (with a suitable adapter) can overcome this problem. 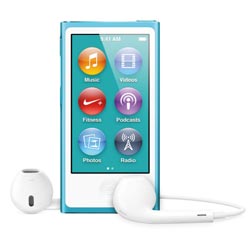 A dedicated MP3 player still has be connected to the vehicle sound system, just like a phone, but it has some advantages over a phone when playing music.

CDs are sometimes overlooked as a music source in rented vehicles. This I not surprising if you only think of traditional retail music CDs. For variety on long journeys you'd need a large supply which, could be bulky, and there is the risk of getting originals damaged. 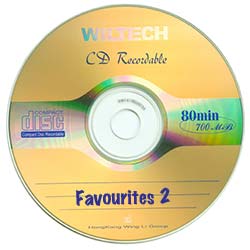 But don't forget the other variety - blank CDs which have MP3 files burnt onto them by a computer. In every vehicle where I've tried playing MP3 files burnt to a CD, the CD player has been able to play them. You'd need to be hiring a very old vehicle for this to not work.

A single blank recordable CD can hold the equivalent of around ten albums of music in MP3 format, depending on the quality it is saved at. And it doesn't need to be whole albums; you can pick and choose favourite song selections.

Two or three blank CDs loaded with favourites might be enough for a holiday, and the simplicity is wonderful. Just a few lightweight and cheap plastic discs ... no other devices needed, no cables, nothing to recharge, no setting up - just insert and press the play button.

The convenience is obvious when leaving the vehicle frequently for sightseeing. Phones or other gadgets should ideally be unplugged and taken with you every time, or at least hidden away, so as not to invite theft while the vehicle is unattended. Then reconnected and set up again every time you return. With CDs, they can just stay in the CD player - they stop when you turn the engine off, and resume when you get going again.

The risk of this out-of-sight and out-of-mind convenience is that a CD can easily be left in the CD player when returning a vehicle at the end of its rental. I’ve done this, and I rarely lose anything. With blank CDs costing less than fifty cents each, and the files on them merely copies, the loss is small. 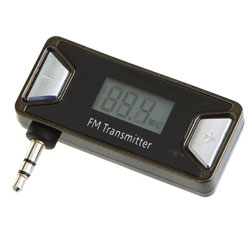 These small devices plug into the earphone socket of a phone or MP3 player, and broadcast the music over the FM airwaves. Just like an FM radio station, but much weaker - the signal only needs to reach the car radio. You select a frequency not being used in that area, and just pick it up on the car radio as if you were tuning into a radio station.

The great advantage of this method is its universal compatibility - any vehicle still roadworthy enough to be hired out to tourists would have an FM radio. It should work anywhere.

However, it's another device needing electricity. Some FM transmitters are rechargeable, some use single-use batteries, some can be connected with a cable to the car cigarette lighter socket, while others can plug directly into it.

Other drawbacks are that the sound quality can suffer a little, and the frequency might need to be adjusted when you drive within range of a radio station using the same frequency. 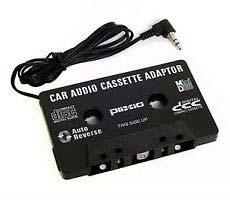 In the old days, when car cassette players were standard, a cassette-shaped adapter could be used to play music from a device with an earphone socket. Back then it was mostly used for portable CD players. Nowadays they are not so useful for rented vehicles for two reasons:

I experienced the latter in New Zealand in 2006. The car I hired was old enough to have a cassette player, but for reasons unknown, my adapter never worked in it. Plugging earphones into my gadget worked, but driving with ears blocked was far from ideal. That’s when I discovered that rural New Zealand had more radio stations and better coverage than I expected.

Services like Spotify allow vast quantities of music to be streamed to your phone or tablet over the internet. It is often claimed to be accessible "anywhere”, but anyone who has travelled much in Australia would know that mobile internet is far from being accessible everywhere.

Mobile phone companies often boast of covering over 95% of Australians. But where most Australians live (mainly urban areas near the coast), and where travellers want to drive, are not necessarily the same. You don't need to go far outside cities and big towns to find coverage patchy or non-existent.

For anyone venturing into the less populated areas that comprise most of the land mass, and contain most of the scenic bits, streaming music over the Internet can’t be relied on. It should work within capital cities and most towns, but even then it could be compromised by pockets of poor mobile coverage. 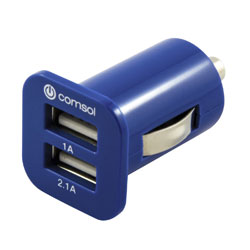 These adapters plug into the cigarette lighter sockets present in all vehicles, and have outlets which can accept USB charging cables. Anything that has a USB charging cable - phones, MP3 players, cameras, etc - can then be recharged while driving.

Small, light and relatively inexpensive, they are an excellent way to keep gadgets charged on a driving holiday. The more useful ones have two sockets, like a 1 amp socket for phones and other devices, and a 2 amp socket for things like iPads which need more current - great if you need to charge a tablet.

Charging things in the vehicle while driving means not being dependent on having mains power at your destination. This can be priceless for campervan users staying in bush campgrounds … or staying in caravan parks and wanting to save money by using unpowered sites. 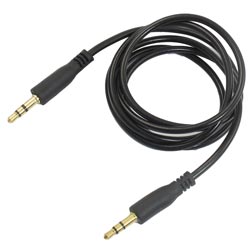 A cable with a standard 3.5mm plug at each end can connect the earphone socket of a phone or MP3 player to the input socket of some sound systems. If one can be used, it provides better sound quality than an FM transmitter, and is more convenient.

Unfortunately not all rental vehicles have an audio input socket. But with audio cables being so small and lightweight, travellers wanting to keep their options open may like to carry one "just in case".

I've tried all of the above over many years, and based on my experiences I suggest:

For simplicity and convenience on most trips - writeable CDs

If a small portion of your music collection accounts for the majority of your listening, then two or three blank CDs loaded with favourites might be plenty for all the driving on a holiday. With nothing to recharge, connect or set up, it is the easiest way to have your own music at your fingertips in most rental vehicles. It just requires some planning ahead - selecting the music, and burning it to CD.

This requires a little setting up each time you resume driving, and occasional adjustments of FM frequencies, but should work in all vehicles and provide access to all of your music - great for longer trips where more music may be needed, or when older vehicles may be used.

If going with the FM transmitter option, I'd still suggest taking writeable CDs of favourites as well. Then you can enjoy the simplicity of popping a disk into the player for listening to favourites, and use the transmitter for everything else.