A taste of Currie, King Island

The main town on King Island, with a harbour, a foodless restaurant and a great bakery

Country towns in Australia and New Zealand each have their own unique character. When the town is the main settlement on an isolated island, that character will be different from your average inland town. For that reason I looked forward to visiting Currie, the main town on King Island. I spent time just hanging out there, trying to get a feel for what makes it different. 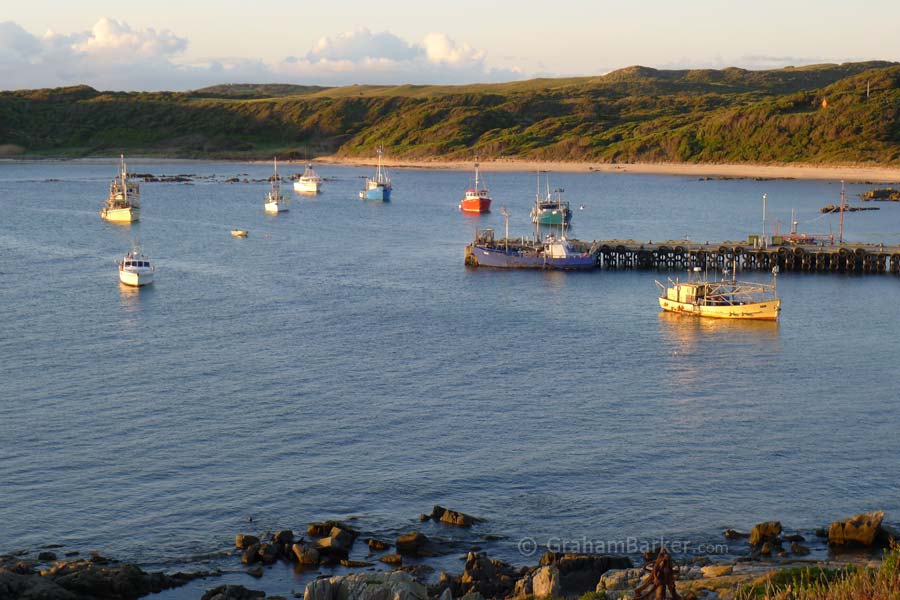 Currie got its noticeable name from Archibald Currie, a sailor and ship owner who also salvaged wrecked ships. The town’s partially sheltered natural harbour served as a base for his salvage operations in the 1860s, and he instigated the distinctive lighthouse which guards it.

I first stopped in Currie after picking up a hire car at the airport and needing supplies for my self catering accommodation. Currie has King Island's two supermarkets - Foodworks and IGA - which makes it the island's hub for provisions. I visited Currie every day of my trip, either for food or because its central location makes it hard to avoid. However I devoted one full day just to Currie and the immediate area.

Apart from the supermarkets, the main street houses other essentials like bank, post office, pharmacy ... everything you'd expect to find in a town that 1800 people on an island are dependent upon (the town itself houses around 750). Grabbing my attention was the King Island bakery. I'd heard good things about this bakery, and was keen to conduct some product testing to see if it was as good as I'd hoped. 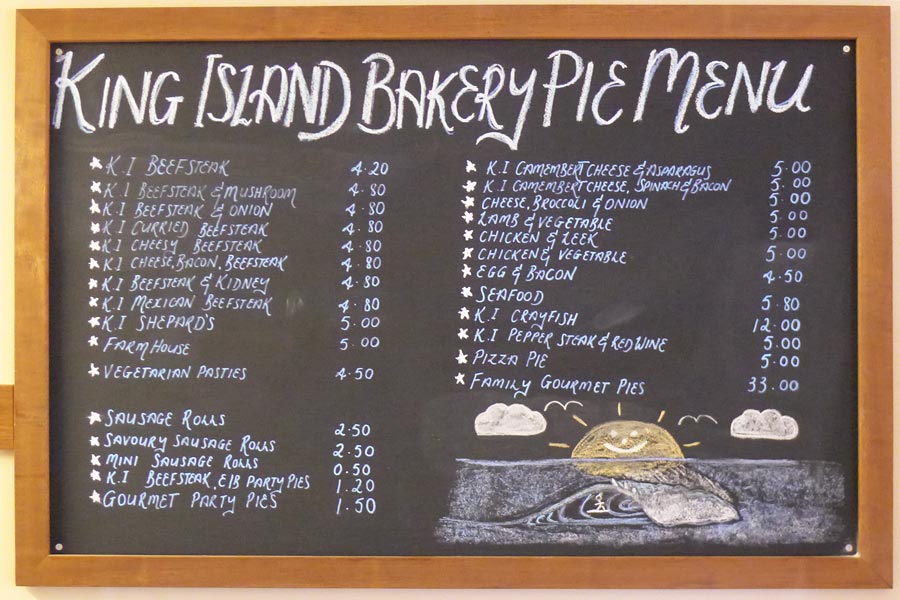 It was. The pies with local beef or camembert were excellent, as were all the naughty but sweet goodies I took away for later. The coffee was decent too - it's a bakery with cafe seating where you can linger and observe. Discussions among the steady stream of people coming and going served as a sort of introduction to the residents of King Island.

Not far from the bakery are a couple of other cafes. There is the Harbour Road Cafe with its sunny outdoor area and some great home made food. Next to the island's only roundabout was Renae's Cafe, with great coffee and food and space to hang out (unfortunately this has since burnt down). There is also the pub, the King Island Club, and a large restaurant with awesome coastal views at the Boomerang Motel on the edge of town.

In other words, Currie is better served with eating places and decent coffee than many country towns of its size. I self catered for breakfast and most dinners, but for lunches and snacks I made a point of trying these eating spots. It's good to support small businesses during their quiet season (that's my excuse). 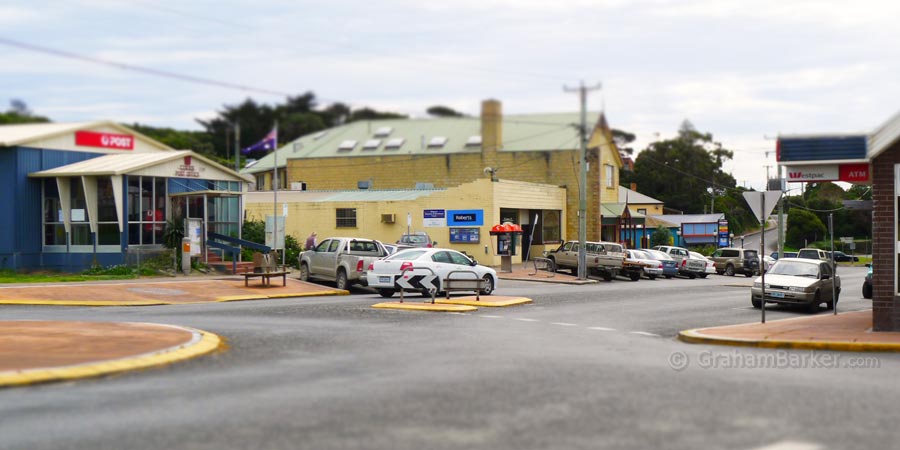 Central Currie: as urban as King Island gets

There was one eating place I was especially curious to see ... the "restaurant with no food", at Currie Harbour. At the end of a grassy path sits The Boat House - a small building overlooking the harbour, furnished with dining tables, an assortment of chairs, a small kitchen, and all the plates, cups and cutlery needed for a meal. All that's missing is the food. You bring your own, and eat there just as if you're in a restaurant.

I wandered in to find tables set and background music playing in the bright and cheerful room, but no people. As a city dweller it seemed amazing that such a nicely equipped and decorated place could be left open and unattended. It was another reminder that King Island still has much of the communal trust and respect that has long disappeared from more urbanised places. Eventually some women and kids arrived for an after-school get-together, turning it into an extension of their homes. 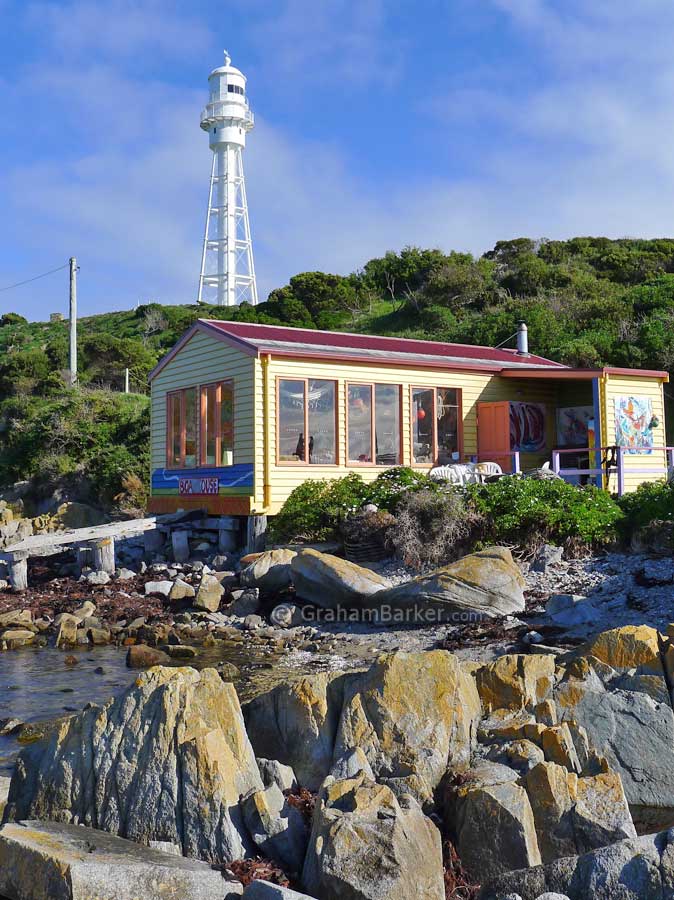 The Boat House (restaurant with no food) and Currie lighthouse 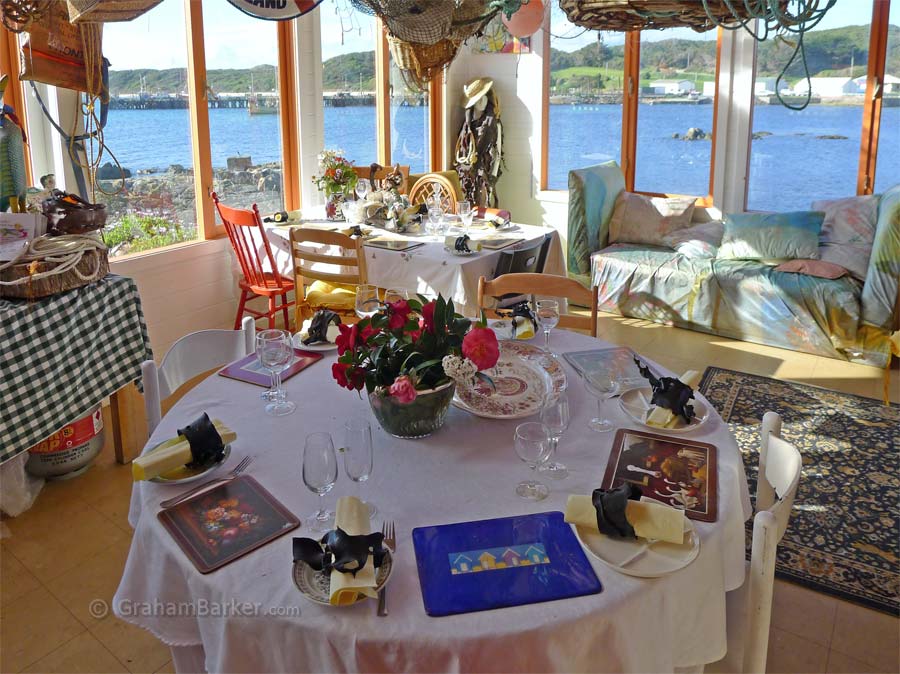 Inside the Boat House

The harbour at Currie is small, but important because it is the only safe place for boats on the west coast of the storm-battered island. Gentle weather on my visit made for some pleasant strolls around the harbour and along the breakwater, observing the low-key activity and local birds. One path leads to a small lookout. The path that goes past the boat house towards the breakwater continues to an unusual lighthouse.

Currie's lighthouse is a distinctive design, and a local landmark. Sitting on top of a hill, it provides a good viewpoint for the visitor and is a pleasant spot to wander around.

Wandering around was exactly what I did ... through most of Currie. The main part of town isn't large, so anyone who enjoys walking and has a bit of time can cover a decent cross section of the place. I roamed the back streets, taking in the mix of basic old houses and flash new ones. I'm not at all into gardening, but I was impressed with many of the gardens in Currie. The even rainfall and mild climate give a head start which many islanders take good advantage of.

As a visitor, you can’t get to know a place all that well in less than a week. But in the course of my stay on King Island I stopped in Currie many times, and started feeling very comfortable there. It has the friendliness and good attributes of a small country town, more facilities than most towns of its size, and the charm of being on the coast of an island. The isolation has challenges for the residents, but for visitors it can be refreshing. It's a town worth spending some time in, not just passing through for supplies.

Looking west over Currie Harbour, from a lookout in the town