When a site was being chosen for Australia's national capital, Canberra wasn't the only candidate. The honour almost fell to the small town of Dalgety, near the NSW Snowy Mountains. I dropped by to have a look at this almost-capital, and found a rural riverside hamlet which could serve as a peaceful base for exploring the area ... and a good spot to see a platypus in the wild.

Dalgety is only about twenty minutes drive from either Jindabyne or Berridale, both of which are on the very busy route to the Snowy Mountains. However, few of the crowds visiting the mountains venture to Dalgety. Admittedly there isn't much in the area that would attract great numbers of people. But if you're like me and curious about the places others overlook, and not fond of crowds, then the short detour to Dalgety is more of an invitation than an obstacle.

I arrived in Dalgety after having stocked my campervan fridge in Jindabyne's supermarkets. After crowded and bustling Jindabyne (it was the ski season), the peace and quiet of Dalgety was in direct contrast ... and very welcome to someone looking for rest and relaxation. Upon seeing the low-key caravan park right next to the Snowy River, I stopped wondering if I should have stayed at Jindabyne, and eagerly drove in.

View from Dalgety of the
Snowy River, boulder-strewn
hills typical of the Monaro
region, and a distant glimpse
of snowy mountains.

The caravan park is the only accommodation at Dalgety, but like most caravan parks these days it has cabins as well as van and tent sites. After settling in, I strolled along the river to spot some of the platypuses the park owner assured me could be seen feeding at dawn and dusk.

I didn't see any sign of platypuses that time, but I did come across the location of Buckley's Crossing. This was the main crossing point of the Snowy River used by the cattlemen who first settled around 1832, and the Ngarigo Aboriginal people for a very long time before that. Back then it was the only safe place to cross the Snowy River, which was much bigger before the dams of the Snowy Mountains hydro scheme reduced the torrent to a trickle.

A town later grew around this point, originally being called Buckley's Crossing. It became Dalgety in 1874, and the one-lane bridge built in 1888 is still in use today. A brochure available at the caravan park describes other historic buildings - dating from 1840 - which can be seen in a walk around the town.

The 1888 bridge over the Snowy River

I did the walk one morning, and couldn't help pondering how different the area would be now if Dalgety had become the nation's capital. It was chosen as the preferred site in 1903, and once legislated the following year Dalgety was set to become the capital of Australia!

However, objections were made, mainly based on the excessive distance from the Sydney to Melbourne railway. In 1908 the region of present-day Canberra was chosen instead. Canberra later blossomed into the sprawling city of today, while Dalgety stayed as it was … but it could so easily have been the other way round.

The town doesn't appear to have changed much since then. I find it refreshing to find places which haven't changed a lot over time, especially understated places like Dalgety which retain some historic ambience without it being overly exploited as a tourist attraction.

I used Dalgety as a base while I was briefly in the Snowy Mountains area. It may not be as convenient as staying in Jindabyne or right on the ski slopes, but returning to a peaceful and much cheaper spot beside the Snowy River can compensate. Driving the roads into and out of Dalgety can be pleasant and nearly free of traffic.

Having been assured that platypuses lived in the Snowy River and could be seen every day, I was determined to see one. My past failures to see any in other platypus hot spots made the challenge more compelling.

The next few times I went looking, there were the tell-tale ripples and momentary appearances of small dark shapes on the other side of the river. I believed they were platypuses, but I couldn't see enough to confirm it.

Platypuses can be elusive and move
quickly, making them a challenge to
photograph. This was my best result.

Then on my last morning I struck gold. Not one but three platypuses were feeding, right in front of me. I could see their duck bills eating, and their whole bodies swimming on the surface between dives. I've seen a platypus in a sanctuary, but seeing them in the wild, swimming in their natural habitat, was more rewarding.

Dalgety doesn't offer much in the way of shops and services. There is a small cafe open in the day, and a pub, and that's it. For all other shops and facilities you'll need Jindabyne or Cooma.

What Dalgety does offer is peace and quiet, a sense of history, and an economical caravan park next to the Snowy River. All within an easy commute of the places people would otherwise stay. For anyone looking for somewhere different to stay and prepared to drive a bit further, these rewards may be worth it ... and you'll probably get to see a platypus or three.

Part of the town of Dalgety, with part of the Snowy Mountains visible. 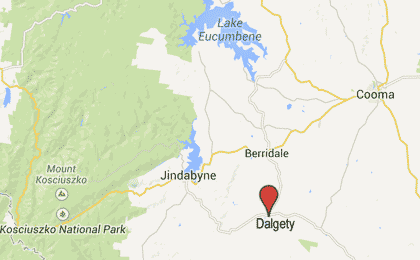 See footer for links to interactive maps
Short link for this page: rdu.pw/228