A large, scenic and little-visited island near Tasmania in Bass Strait

Imagine a large island with spectacular coastline, pristine beaches with barely a footprint, modest yet rugged mountains, a friendly and laid-back rural community - all unspoiled by tourism because not many people go there. I'm describing Flinders Island, just to the north of Tasmania in Bass Strait ... but is it really that good? 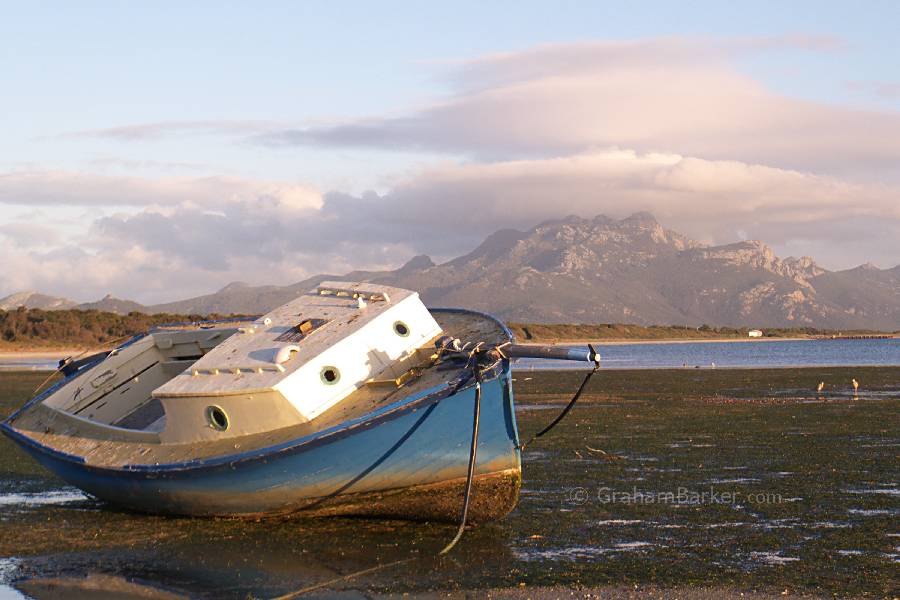 After many years of flying right over Bass Strait to get to Tasmania, as everyone does, I thought it about time I stopped to look at the biggest of the islands in that stretch of water. And so I did, as a stopover on the way to my next Tasmanian trip. In my opinion, Flinders Island is indeed a beautiful place, and also very overlooked by tourists.

If it is so lovely, then it's fair to question why not many people go there. What's the catch? Before I expand upon the good bits, allow me to first mention the main deterrents which keep the crowds away. Flinders Island is: 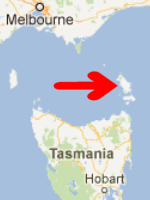 In addition, the lack of shopping, nightlife and organised tours limit the appeal of the place to some. Even if people overcome these obstacles and decide they'd like to go, there is another barrier holding the crowds back:

So, the fact that Flinders Island has few tourists is no indication of the island's worthiness. On the contrary, for those who prefer roads less travelled, it can be an attraction. But enough of why people don't go there; what can someone expect if they do?

My first impressions of Flinders began with the journey to get there. Train and tram to Essendon Airport, a small airfield with one check-in desk and one gate. Just a handful of people waiting around - mostly Flinders locals who knew each other - with the 19 seat propellor-driven aircraft just a few steps away. A far cry from most modern flights, where people are processed in bulk before being crammed, hundreds at a time, into big metal tubes. 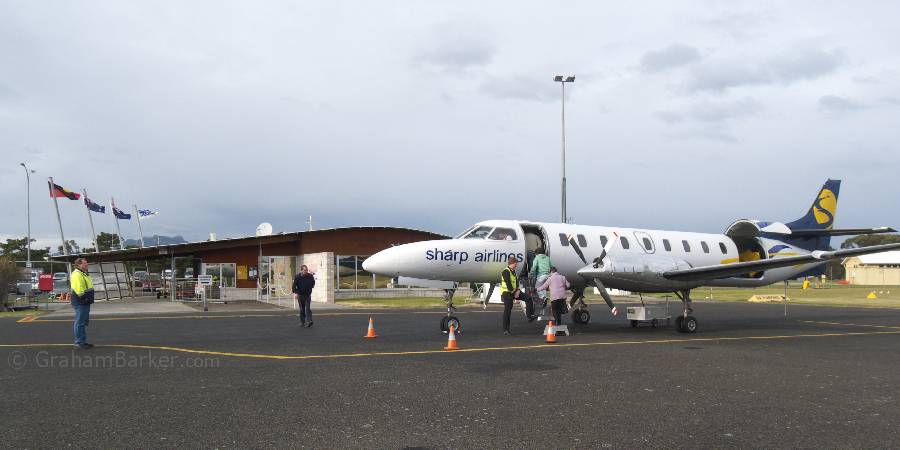 The flight passed low (compared to the big jets) over the coast of Victoria to the southernmost part of mainland Australia - Wilson's Promontory. It's easy to think of the land ending at "The Prom" and restarting in Tasmania, but a flight in clear weather illustrates the reality. The land continues; it just dips underwater for a bit, with the hilltops manifesting as islands in Bass Strait.

Being blessed with clear skies, I was able to see and admire some of these small, isolated and ruggedly alluring islands. It occurred to me that I was closely following the route to Tasmania taken by the Aboriginal people 40000 years ago, when they were able to walk across the land bridge which resulted from lower sea levels in the ice age.

The airport at Flinders Island was even more low-key, in keeping with the laid-back nature of the island. As was the lack of traffic, and absence of background noise other than birds. I was met at the airport by the owner of the Flinders Island Cabin Park, which I used as my base. 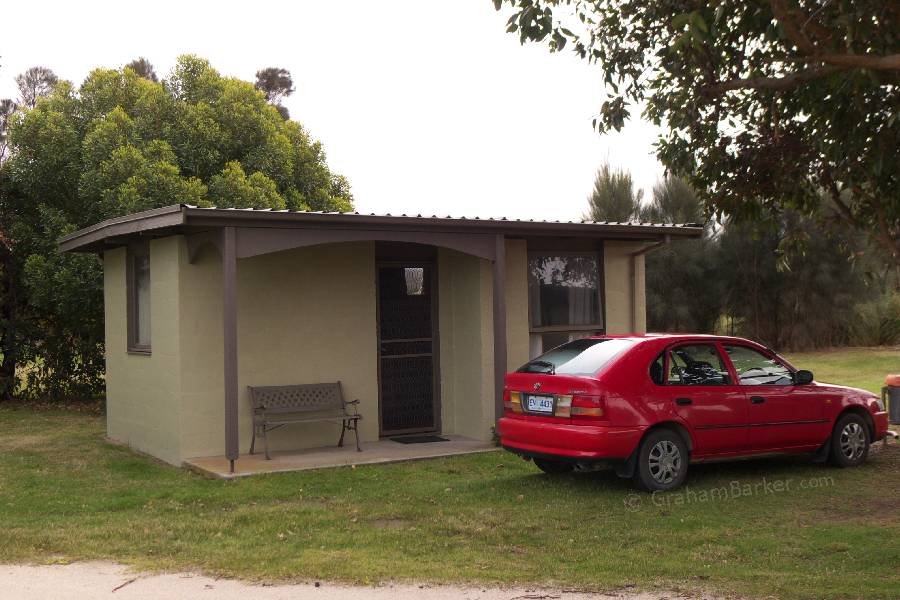 The cabin park has hire cars, one of which I used to cruise the island's quiet roads. First stop was the supermarket in Whitemark to stock up on groceries, then to Walker's Lookout to see the lie of the land. In clear weather, the view is expansive.

Pristine beaches are a selling point of Flinders Island, and I got to enjoy many of them. The beaches of Tasmania's Bay of Fires have a reputation for unspoiled beauty, as do those around Esperance in WA; but as great as they are, I thought the beaches of Flinders Island had an edge over them. More scenic, and a greater sense of remoteness.

They say if you find footprints on a beach on Flinders, then just find another beach. In the off season I saw very few other footprints on any beaches, and most of those were birds. Probably not surprising as I was one of only three or four visitors to the island the week I was there. Sometimes it almost felt wrong to spoil the untouched sand with my own feet. 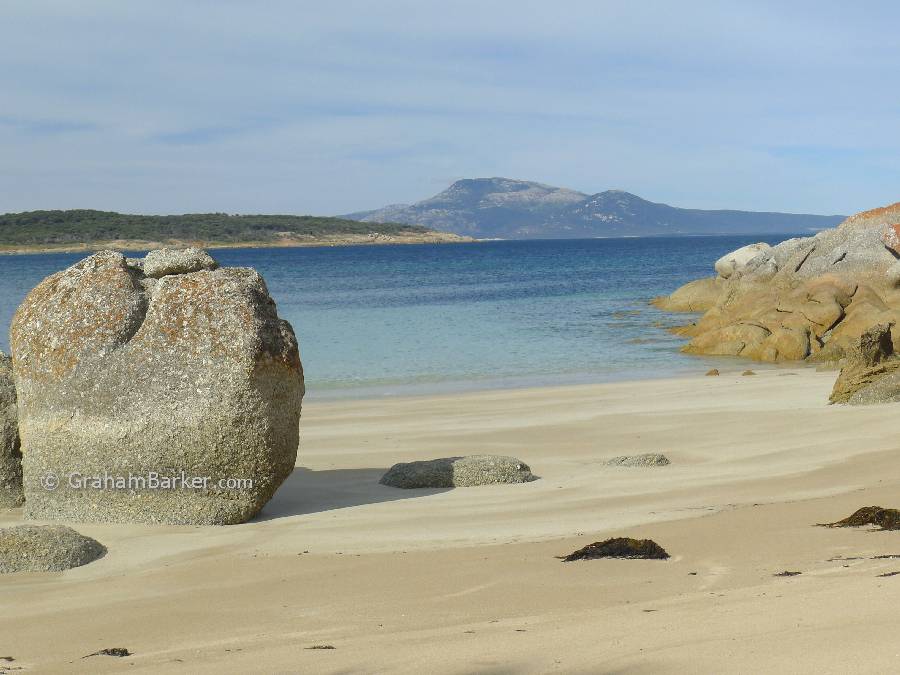 Cape barren Island viewed from a beach with no footprints

Mountains also feature on Flinders Island. They may not be huge, topping out at 756m on Mt Strzelecki, but they provide a pleasing backdrop to much of the island. With more time I might have tried the five hour climb to the top; the views would be awesome.

Fishing and boating also draw people to the area. The 52 islands making up the Furneaux group, of which Flinders is the largest, have been described as the Whitsundays of the south. I'm not into boating or fishing myself, but the vistas of uninhabited small islands often seen from Flinders were enticing - if I lived there I doubt I could resist getting a small boat. If one side of the island was rough or windy, the other side would be more sheltered.

Walking options are many. I followed some marked trails, but spent more time just finding nice looking patches of coast and simply going wandering. As an antidote to urban life, such unstructured exploration of relatively untouched nature is hard to beat. Many were the times it felt like I was the first human to visit a particular spot, as if I'd been transported back in time to before the world was populated. 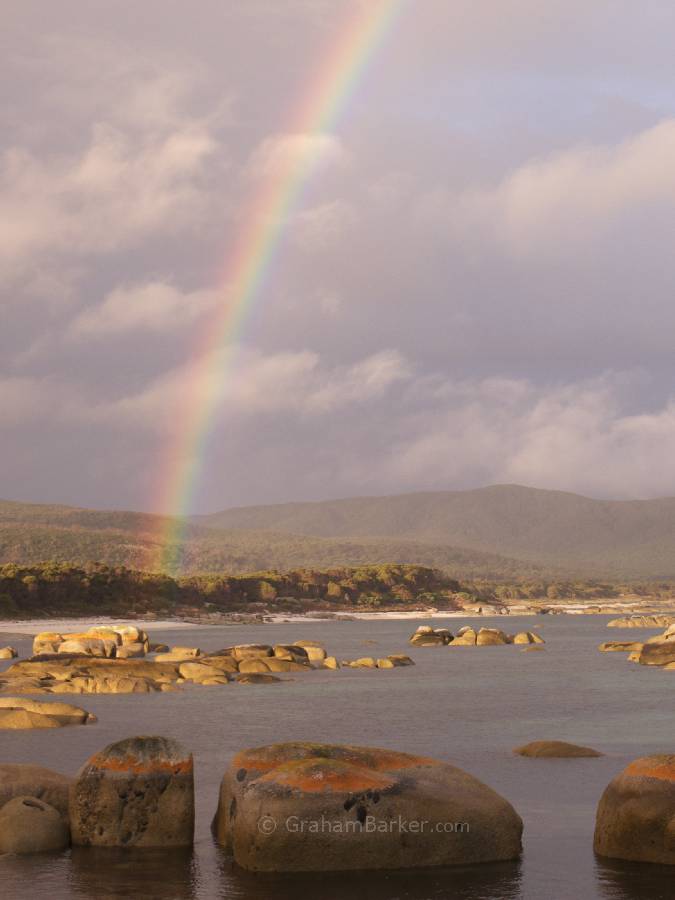 One way in which I felt transported back in time was with the character of the island community. Graffiti and litter were rarely spotted, and crime is not something I felt any concern about. I wasn't there long before I stopped bothering to lock the door on my cabin, and I didn't lock the car at all ... and this felt perfectly appropriate. There can't be too many places left like this in the modern world.

Another throwback to an earlier generation is the opening hours of the businesses. Most places shut around 5pm on weekdays, and those which open on weekends are mostly only open Saturday morning. Personally, I found it refreshing to be in a place where commerce is a servant, not a master, and where selling stuff isn't everything.

For visitors used to longer hours, some planning ahead may be needed. To help, a list of all the island's businesses and their opening hours is available as a brochure for visitors, and also on the island's website, so there is really no excuse for being caught short. 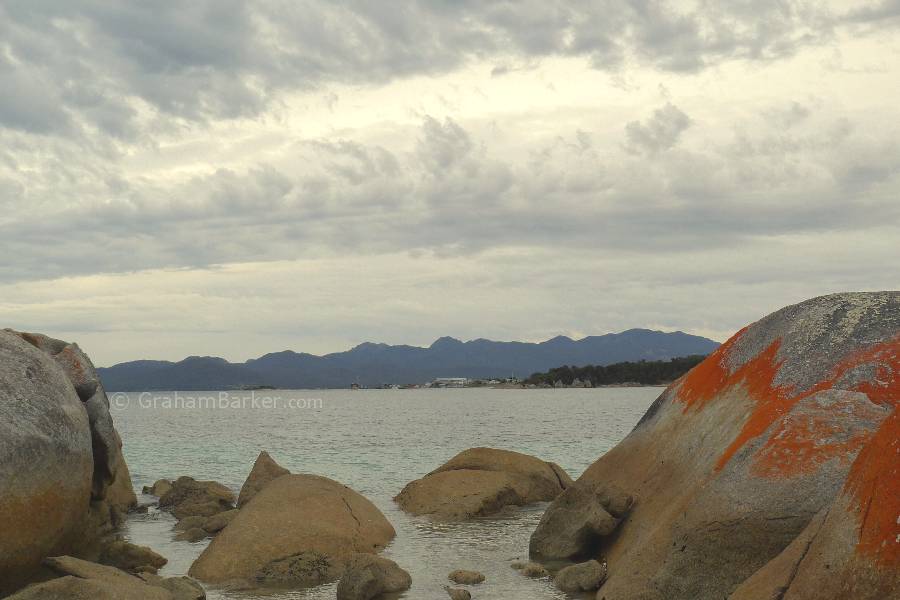 Even the rocks can colour a grey day. Yellow Beach, near Lady Barron.

I thoroughly enjoyed my time on Flinders Island. Driving the mostly empty roads was a therapeutic joy, the coastal scenery delightful, the wildlife plentiful, and the walks had a special quality owing to the sense of remoteness. As for the weather, I experienced tastes of all seasons during my stay, with not too much rain or wind to spoil things. The friendly and safe nature of the community made it pleasant to simply be there, not doing much.

Visiting Flinders Island won't suit those needing the stimulation provided by activities, events, or lots of people ... or those on a tight budget. But if you appreciate natural attractions - beaches, hills, walks, boating or fishing - and enjoy quietly exploring roads less travelled, then the island can seem like a paradise. If you're into photography, then the unspoiled scenery and changing light is especially delightful.

My recommendation would be to spend a minimum of three full days (and four nights) on the island, but preferably more if you like to explore thoroughly and do walks without feeling rushed. That's just for general sightseeing - fishing, boating, hiking and photography could easily justify much longer. I stayed at the Flinders Island Cabin Park and can heartily recommend it as somewhere clean, comfortable, convenient to airport and town, and priced well compared to other places. The hosts are friendly and helpful too.

However you get there, and however long you can stay, the most important piece of advice I can offer is ... just go there! Flinders Island is special.

Strzelecki peaks at dusk, from the mudflats at The Bluff, near Whitemark