Australia's most southerly railway and last surviving bush tramway, in the far south of Tasmania

Tucked away in the far south of Tasmania is a railway notable for two reasons ... it is Australia's most southerly, and is the last remaining bush tramway in the country. The two hour return ride is a pleasant way to taste the area's scenery and history, and access a remote beach walk. 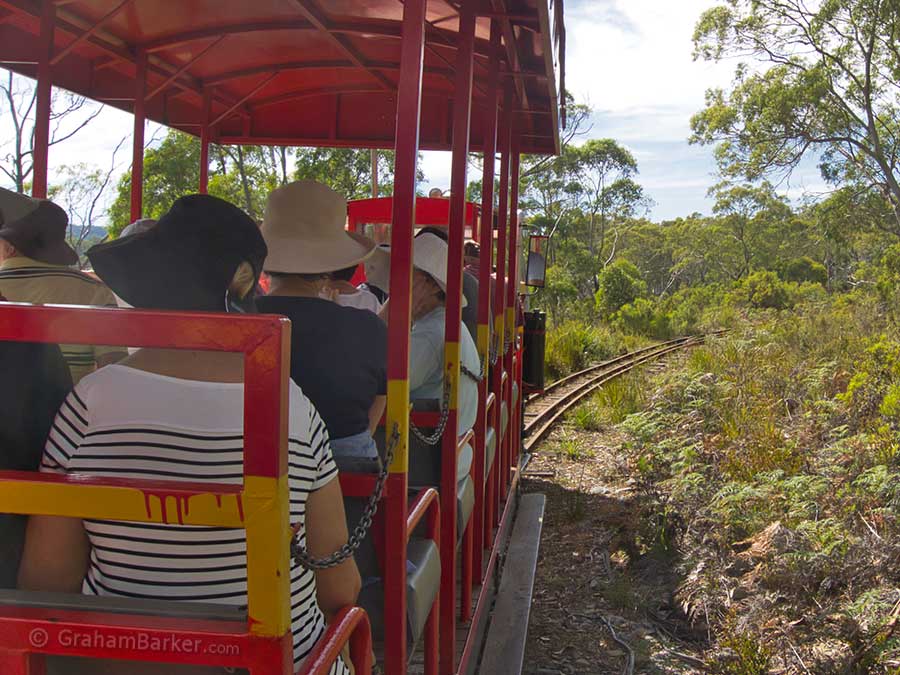 The railway is a relic of times when many of Australia's forests housed networks of bush tramways, or narrow-gauge railways. Most were built to transport timber out of forests being logged, and have long since been torn up. If you've ever followed a forest walking track with conveniently gentle slopes and curves, it may well have been following the route of one of those tramways.

Ida Bay Railway, on the other hand, was used to transport limestone from quarries to ships. It commenced in 1919 and, unlike logging tramways, was in use up to 1975 - recent enough for it to have been preserved as the sole surviving railway of its type.

Lune River is where the railway begins, about two hours drive south of Hobart. There isn't much there - calling the place a small hamlet would be overstating it's size - but that makes the railway very easy to find. Tickets are sold at the small cafe which is Australia's most southerly, or as they say, 'the last place in Tasmania'. Eating any further south is entirely bring-your-own. 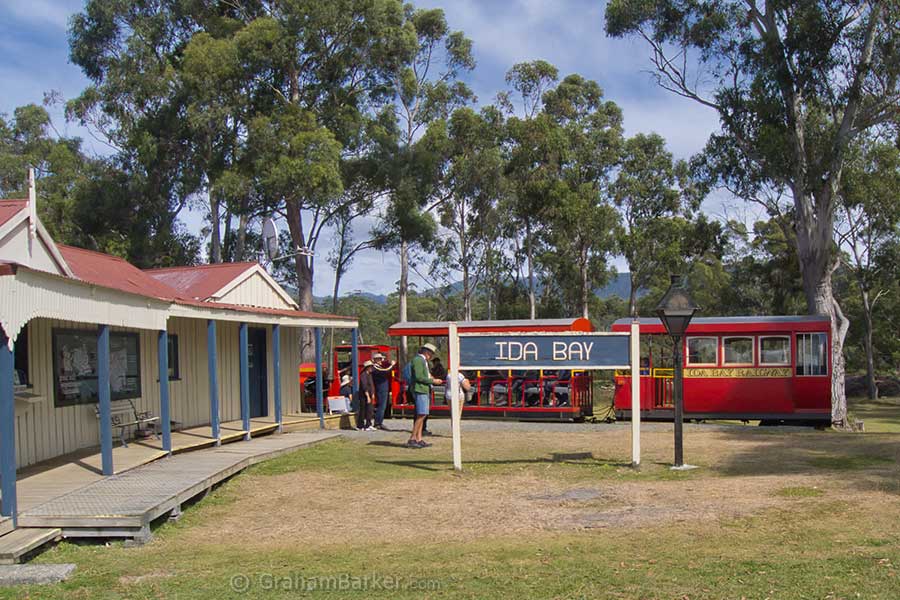 One of the first things I noticed while waiting for the train is how close together the tracks are. To be specific, the tracks are only 61cm or two feet apart. This narrow gauge was typical of old bush tramways, which needed tighter curves and steeper slopes than regular railways, and used smaller vehicles.

Another thing to notice is that the train doesn't travel very fast. But then it doesn't need to. The distance to cover is short, and the whole point is to enjoy the ride and take in the scenery. Unobstructed photo opportunities can be had in the open carriage and parts of the covered carriage.

The train may not appear very historic at first glance, but the modern carriages are mounted on original bogies from the 1890s. Also the diesel engine up front is from the 1940s; the fact it doesn't look very old is a testament to some good maintainence. 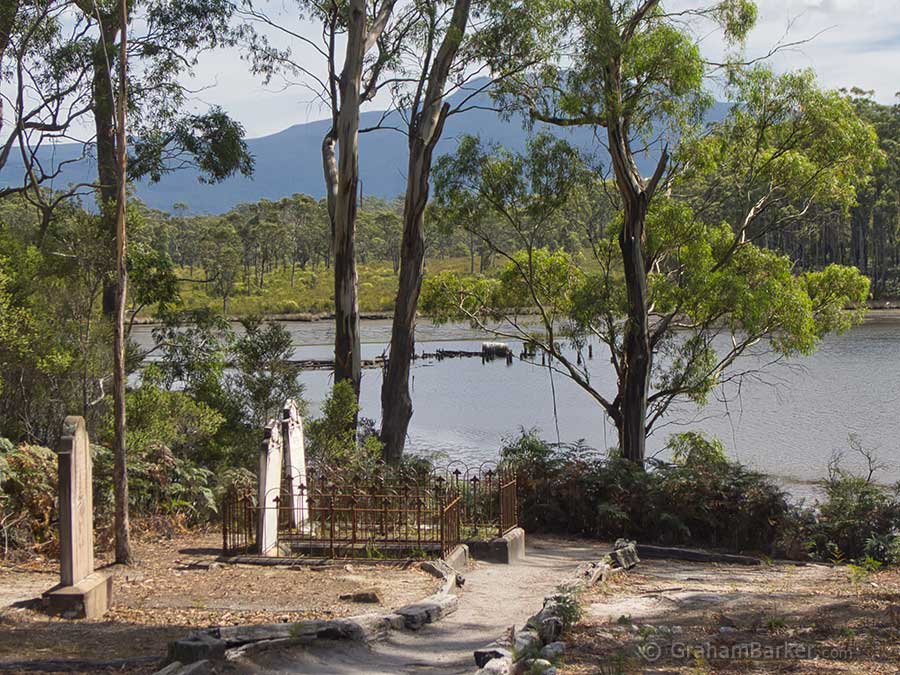 Graves near an abandoned settlement which the train stops at

On the outward journey a stop is made at the site of the Ida Bay settlement. There isn't much left other than a couple of graves and a clearing, but life at one of these isolated outposts can easily be imagined. As you might expect on a ride aimed at tourists, the driver tells stories about what life was like when the railway was built. In stark contrast to now, the railway was once a busy and vital link in a growing community.

The train plods on, curving its way alongside the Lune River estuary. Views of native bush alternate with views across the water, and in the distance the sometimes-snowcapped Adamsons Peak.

Deep Hole Bay, 7km from Lune River, marks the end of the line. The train stops for about 15-20 minutes - enough time to stretch the legs and go for a stroll around a small beach and the remains of a smell jetty. 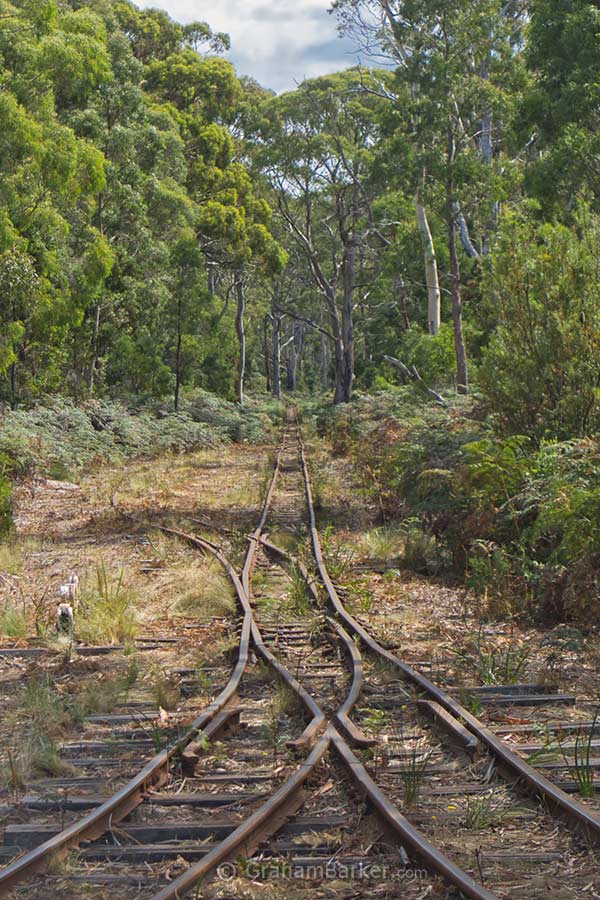 You can also do a one and a half hour return walk to Southport Lagoon from the train terminus. This involves leaving one train and being picked up by another. The drivers are happy to accomodate this, as long as it is arranged with them. Passengers going missing from one train and expecting a seat on another is obviously something they need to know about!

All the stopping and commentary is done on the outward journey, so the return to Lune River is quicker. As with bushwalks, the scenery can look a little different going in the other direction. I noticed a few things going back that I'd missed on the way out.

Trains run all year round, but less frequently in winter - checking the website for the current schedule is wise. If you're visiting the far south of Tasmania, the Ida Bay Railway is a short diversion I can recommend. And if you're like me and appreciate gentle walking trails, it's the last place left to experience one of the bush tramways responsible for so many of them. 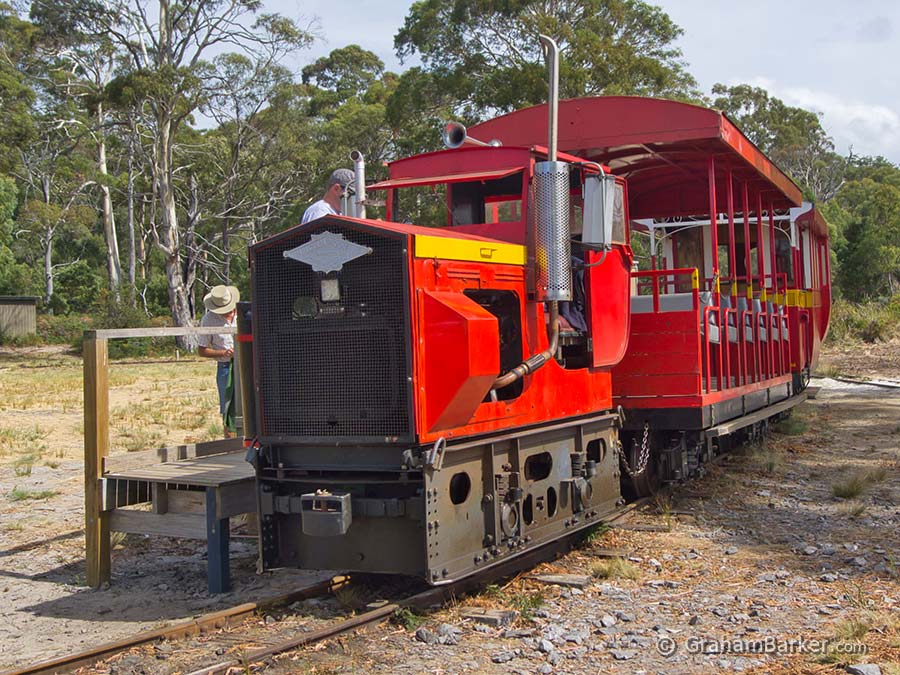 From the railway terminus, looking across Deep Hole Bay towards Southport 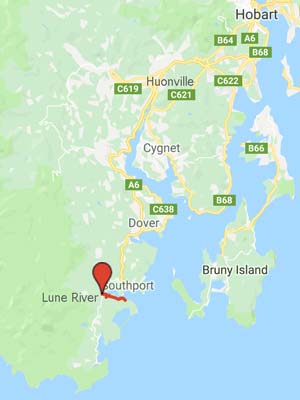