Queenstown has become New Zealand's adventure capital and this is where most tourists head for the kiwi experience of a jet boat ride. The famous Shotover Jet at Queenstown is justifiably very popular, but there are plenty of other options for those wanting an exhilaratingly rapid ride on a ravishing river. Here I look at a few of them. 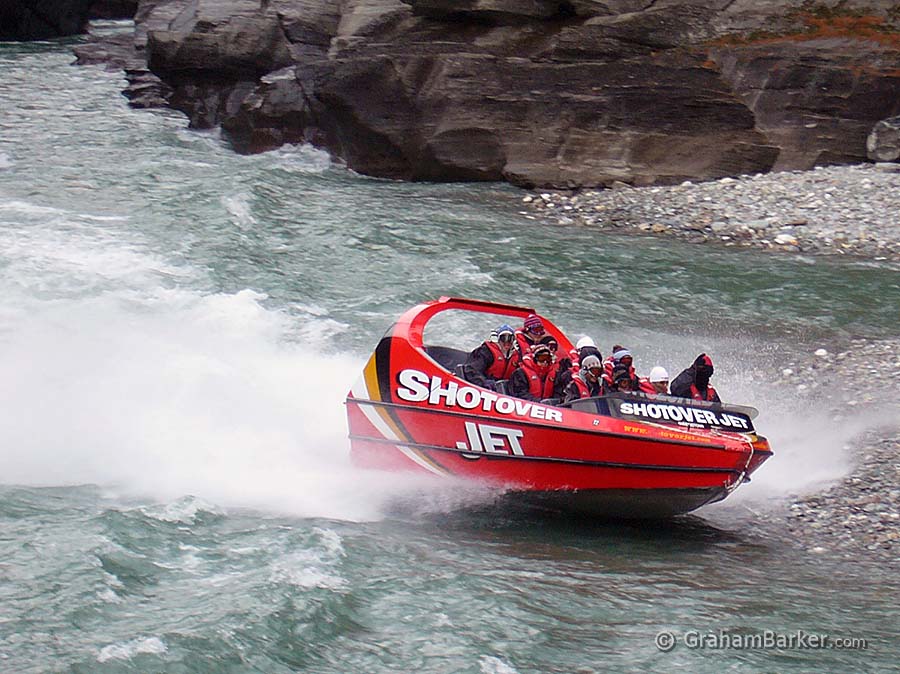 The Shotover Jet, based on the Shotover River gorge at Queenstown, was my first jet boat ride. It was my first trip to New Zealand, so I was content to go where everyone else normally goes and follow the well trodden routes (going to less visited places would come later). In Queenstown it seemed a jet boat ride was the thing to do, so I did it ... and it was awesome. Speeding through a narrow gorge and narrowly missing the steep rocky sides lived up to the hype of the brochures. A classic wind-in-the-hair thrill, when I still had all my hair.

It was a great example of why heavily promoted "must-do" touristy activities shouldn't be dismissed too quickly by independent crowd avoiders, like I've since become. Sometimes the crowds are onto something good! 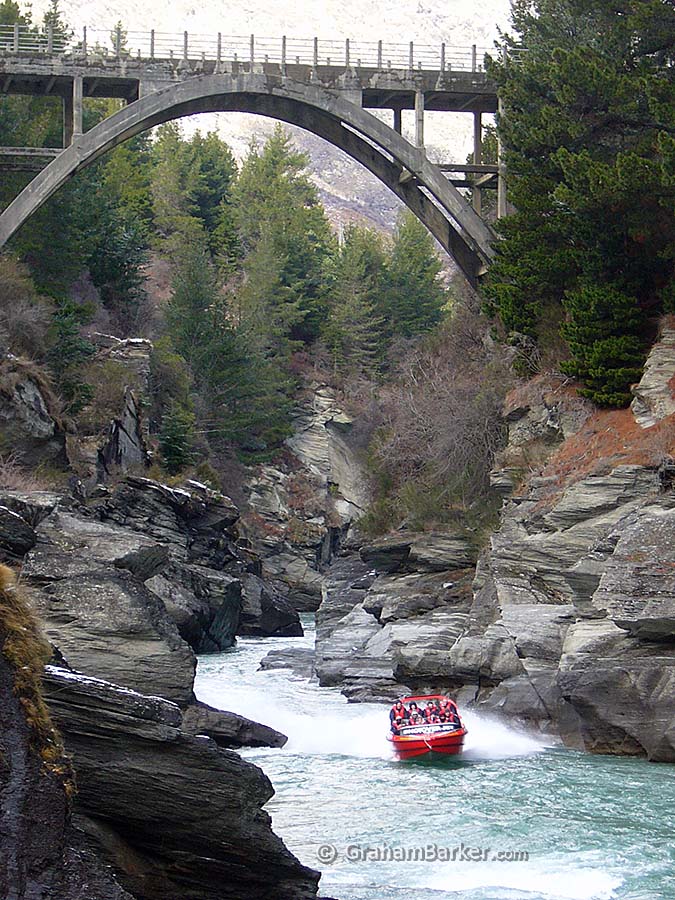 My next visit to New Zealand included a stay at Hammer Springs. This town has a lovely club ski area, plus the hot springs it is best known for - a great combination when visited in that order. It also has the Waiau River flowing speedily through a gorge, complete with a distinctive bridge ... just like Queenstown. Under the bridge was a jet boat operator, so I went for a ride. It was awesome.

The speed and exhilaration of jetting down a gorge and dodging the sides was similar to what I had enjoyed at Queenstown. And yet it was different. A smaller boat with less people, different scenery, including a few cows and sheep on the riverbank. More variety in the surroundings gave it a different feel. It didn't repeat my Queenstown experience ... it added to it.

That boat ride at Hammer Springs was the first serious outing for my new (at the time) video camera. This was the 1990s, and the analogue camera was the size of a small football and weighed nearly as much as a brick. Despite these constraints and the wild movements of the boat, I managed to get enough useable footage to give a taste of the ride - this appears down below. 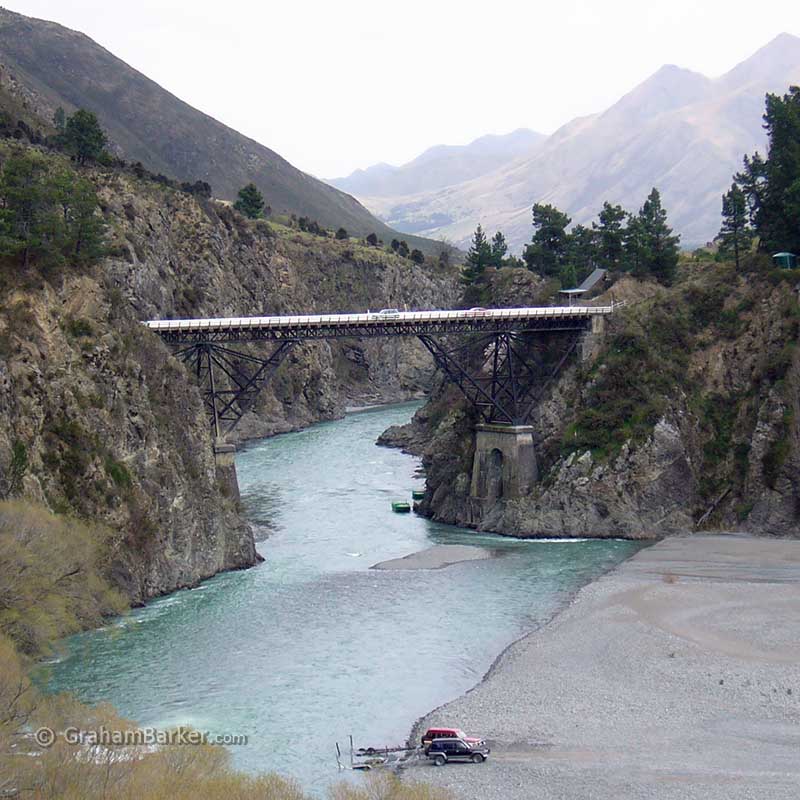 On subsequent trips I didn’t bother shooting any video, not having the tiny modern gear that makes action video so easy for the travellers of today. But for anyone with a GoPro camera, a jet boat would be a great vehicle to use it on.

Some years later I was back in New Zealand for skiing, and when in Queenstown I did another jet boat ride - this time on the Kawarau River. Like at Hammer Springs, it had all the thrills and near-spills of a fast jet boat ride, but in a different environment. The ride on the Kawarau has some bits in a gorge, but is largely in a more open setting. And being in the Queenstown area, the backdrop is gorgeous.

Another trip, another jet boat ride - the next holiday saw me on a jet boat up the Matukituki River near Wanaka. No gorge, but a beautiful valley with more of a wilderness feel. Also a much longer trip, with cultural commentary by a Maori guide, and plenty of speeding through water barely deep enough to cover the feet. I've written a separate page on this - see Wanaka River Jetboat Journeys.

Those are the jet boat rides I've done so far, but there are others I'd still like to do. Between Wanaka and Haast there is a combination helicopter, hiking and jet boat package called the Siberia Experience (part of it is through the remote and alluring Siberia Valley). So far bad weather and insufficient bookings have conspired to make this option unavailable when I've been in the area. Next time, maybe.

The Dart River, near Glenorchy, is another jet boat ride I've heard good reports of. Glenorchy is at the far end of Lake Wakatipu from Queenstown, and having stayed there briefly I can vouch for the beauty of the area. I can't imagine a boat ride on a wild river in such isolated splendour not being enjoyable.

Not all jet boat operators are in touristy places or scenery hot spots ... they can be found all over New Zealand. They may not be where you expect them either.

I was driving towards Mt Hutt once when I pulled over for a driver reviver stop at the side of the Rakaia River. There, in the middle of an otherwise deserted river bank, was a man with a jet boat offering rides. He'd just pulled up, put his boat in the water, erected a sign, and sat waiting for customers to pass by. A ride up the nearby Rakaia Gorge would have been a lovely diversion if I'd allowed enough time for it. And money ... none of these rides come cheaply.

The point I want to make is that there are many opportunities for jet boat rides all over New Zealand. The Shotover Jet is a great ride, but is just one of many worthy choices in a country abounding in scenic rivers and fast boats.

This at-times shaky footage shows part of a jet boat ride on the Waiau River near the town of Hanmer Springs on New Zealand's South island.
Music: The Chase, from the soundtrack of the "The Man From Snowy River" film