One of Australia's great cheese makers, on a Bass Strait island

Tasting King Island Cheese at the place where it is made is a popular thing to do when visiting King Island. As a cheese lover I couldn't resist doing this myself. Despite already having tried their widely available cheese at home, visiting the dairy for tasting at-source was a worthwhile experience I can recommend, especially early in a visit to the island. 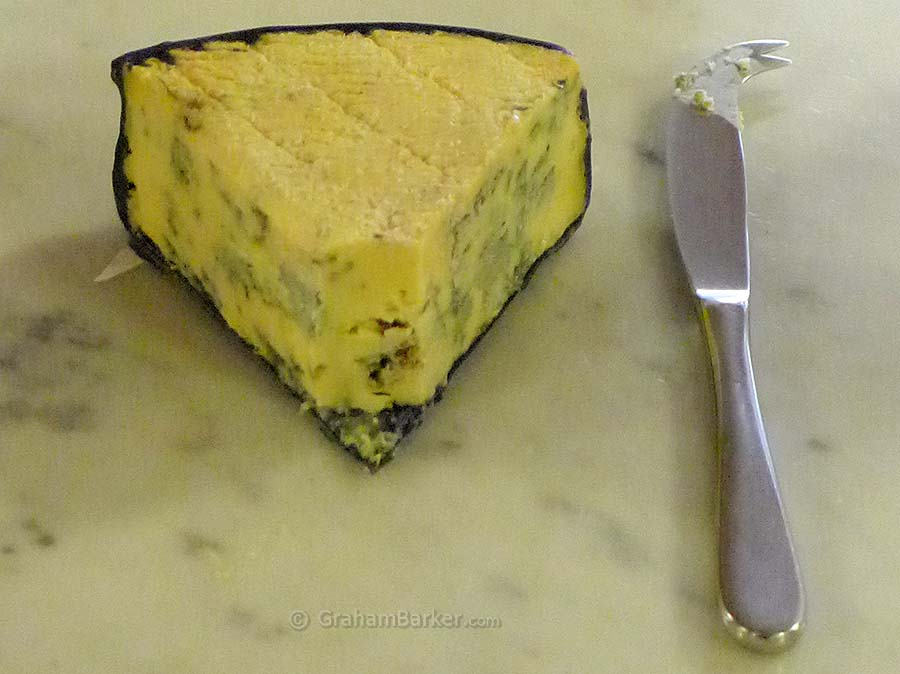 Cheese has been made on King Island since the early 1900s, and has earned a good reputation. Even those who know nothing else about King Island are probably aware of the cheese. A prime reason is the lush grass that stays green all year round, a rarity in Australia. The rainfall isn't much more than Perth's, but is spread evenly through the year in a mild climate not much affected by heat or drought.

The green grass is one of the first things you notice when approaching the island by air, and the abundance of good-looking cows becomes obvious once on the ground. By the time you've reached the dairy, 9km North of Currie on the main road, you've probably passed some of the cows who supply milk for the cheese.

The King Island Dairy is a cluster of buildings sprawling away from the road. Tastings and sales have their own small building, making it easy for visitors to find. I was the only visitor at the time I arrived, and received a friendly personal welcome. 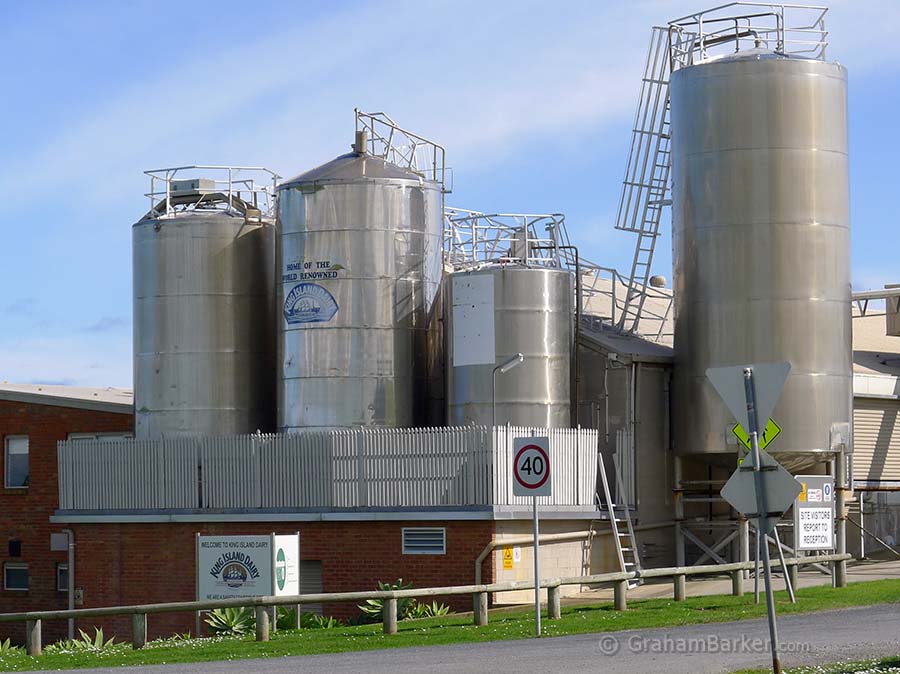 A small room is set up for watching a 14 minute video introducing the cheese, and I opted to watch it. The video is well produced and gives a history and overview of cheese making on King Island. Not essential, but for me it set the scene for some serious tasting and had me primed to appreciate it.

Cheese tasting happens in a separate tasting room which is kept at a temperature that suits the cheese. I liked that - people adapting to conditions right for the cheese, instead of the cheese being left out to deteriorate in warmer conditions that suit people. Cheese is taken seriously here.

Samples of cheese are laid out on marble-like slabs, with notes describing the cheese and how it differs from others. Water and crackers are provided for cleansing the palate between samples. For the serious taster there are printed scorecards listing all the cheeses, with spaces to write your own comments and rankings using the pencils supplied. 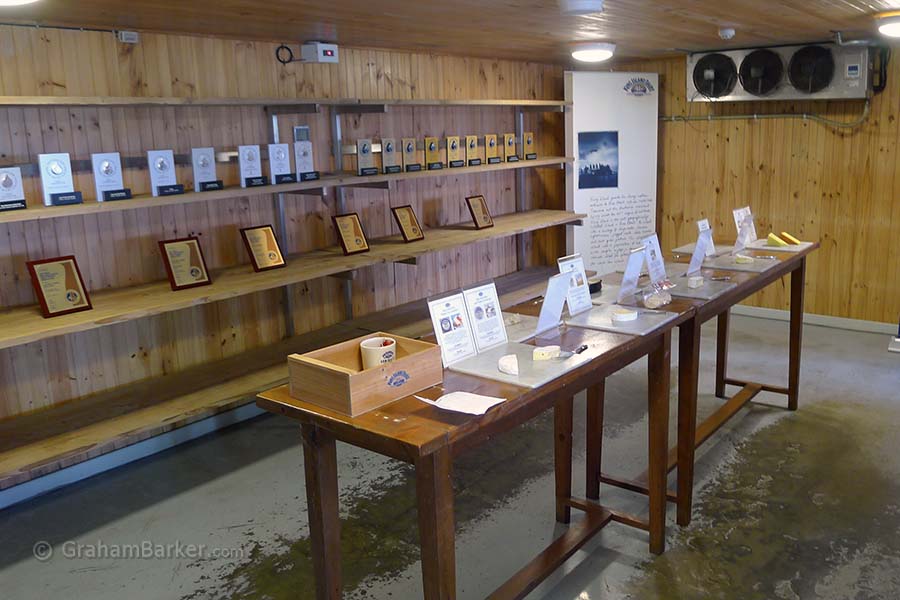 Inside the tasting room. Some of the dairy's many awards are displayed on the back wall.

Some other places offering cheese tastings put out teeny weeny cubes of cheese to be picked up with toothpicks. Not on King Island. They put out complete blocks or wedges, and you just cut off what you want with a knife. I appreciated their more generous approach ... I could get a far better sense of the cheese’s taste and texture from a generous portion than a tiny cube.

I made use of the scorecards and assessed the cheeses from the gentlest to the strongest, which is roughly the order they were laid out in. Because they were clearly not being stingy with samples, and I didn't feel under scrutiny, I felt free to occasionally retry a previously-tasted cheese. This helped me get a clearer feel for how the cheeses compared with each other.

It's this ability to compare across their range that makes cheese tasting at the dairy so worthwhile. Their cheeses are available across Australia, and anyone keen on cheese would probably have eaten some of them already. But you can't try before you buy in a supermarket, and usually only some of their range is available. There were some cheeses at the King Island Dairy that I’ve never seen anywhere else. At the dairy the whole range is available in one place, where they can be compared directly. Even people already eating King Island cheese back home can benefit from tasting at the source. 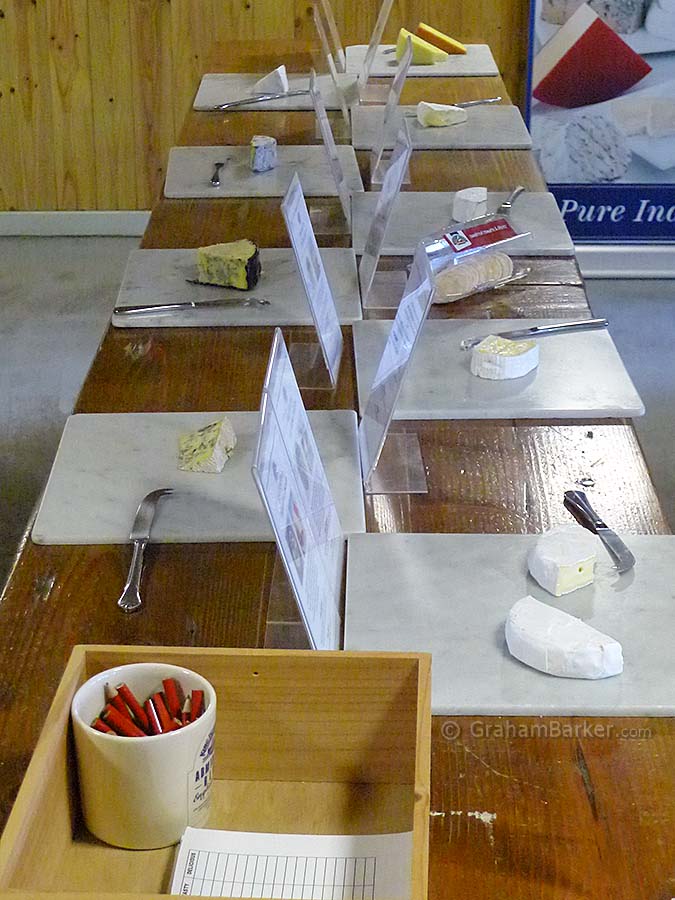 Cheese laid out for tasting - with scorecards, pencils, crackers and water

Once you've tasted and settled on a favourite or three, cheeses can be bought from the room next door. I was pleasantly surprised to see that prices were considerably cheaper than anywhere else - about one third of what I'd be paying back home in Perth, where I can’t get all of their cheeses anyway.

Naturally, I stocked up on a few to enjoy while touring the island. Being able to eat your way through a cheese feast while on the island, before leaving, is the main reason I'd suggest visiting King Island Dairy early in a visit rather than near the end. Another reason is that not all of the cheeses may be available in the tasting room on any particular day ... in which case you can drop by another time to see if new stock has been put out.

That's what happened to me. When I visited on day one of my King Island trip there were a couple of stinky blue cheeses missing from the tasting room. I went back a few days later and found they had been restocked. Of course I then had to re-taste some of the others, so I could make proper comparisons.

The King Island Dairy is open for tastings most days from 11:30 am. When I was there they were closed on Saturdays - anyone thinking of visiting should check the latest opening times first ... and be prepared to be tempted. 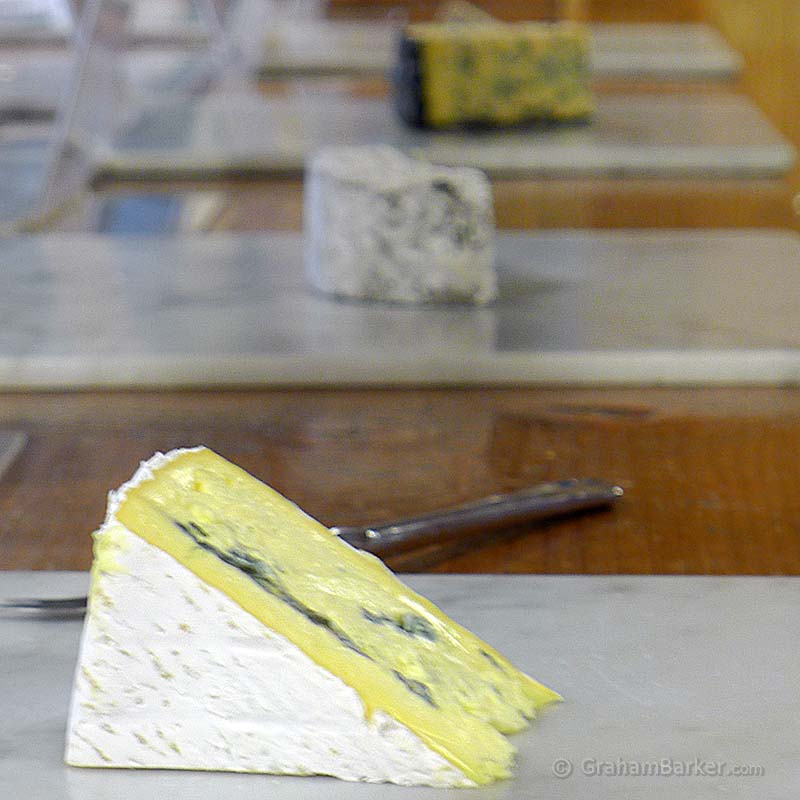 Blue cheese, before I dug in

Good coffee at Kellerberrin
Quality coffee and food in Western Australia's wheatbelt
Cheese tasting at King Island Dairy
One of Australia's great cheese makers, on a Bass Strait island
The Honey Farm at Chudleigh
More than 50 types of Tasmanian honey with free tastings, plus great ice cream
Cheese tasting in Tasmania
Tasmanian cheese makers where you can sample the products
Dining pleasure in suburban Melbourne - Maling Road
A charming street with a special ambience and some unique coffee and eating places