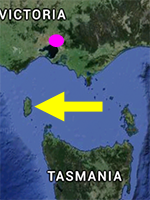 Many people have heard of King Island - especially lovers of the cheese which the island is best known for. But you'll be hard pressed to find many who have been there. It was mainly that obscurity which drew me there, helped by the desire to eat good cheese where it is made. This is an overview of my visit to the island and my impressions of one of Australia's unique places.

So where exactly is King Island? It's in Bass Strait, about half way between Victoria and Tasmania. King Island sits at the western end of this stormy stretch of water. The other big island is Flinders Island at the east end of Bass Strait. I had already visited Flinders Island and loved it, so it made sense to also visit the other big island and compare the two. Any excuse would do.

As with Flinders Island, cost is a barrier to visiting King Island. The only way to get there is by air, and the 200km flight from Melbourne (the pink blob in the map above) costs about as much as cheaper flights from Melbourne to Perth. Once there, accommodation is lacking at the budget end of the scale. The only way to get around is to hire a car, and - you guessed it - there are no cheap options. On the positive side, this helps keep the crowds away.

It is possible to fly there directly from Melbourne airport, but I chose the crowd-avoiders option of flying with King Island Air. For me this meant a low-key journey by public transport and walking to Moorabbin airport in Melbourne's South east, followed by a memorable flight in a very small aircraft. 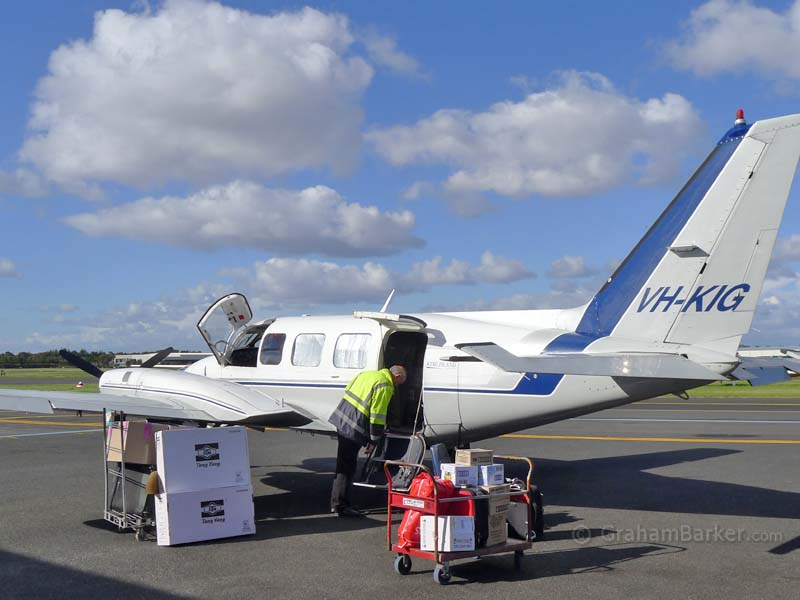 The eight-passenger plane I flew in held mostly freight with just three passengers and the pilot. One passenger had to occupy the co-pilot's seat, and I was delighted when that passenger turned out to be me. The great view and small personalised nature of this flight was a huge contrast to being crammed into a giant Airbus with hundreds of others.

Upon landing I was greeted by a woman with the keys to a hire car - the only way of getting around the island. Within minutes I was driving through vivid green countryside towards the main town of Currie, to collect groceries on my way to where I was staying.

One of the first things I noticed was the delightfully clean fresh air. Most country air would have felt better than what I had just left behind in Melbourne, but King Island and the north west tip of nearby Tasmania have what is confirmed to be the world's cleanest air. Scientists have measured it, so it must be true! 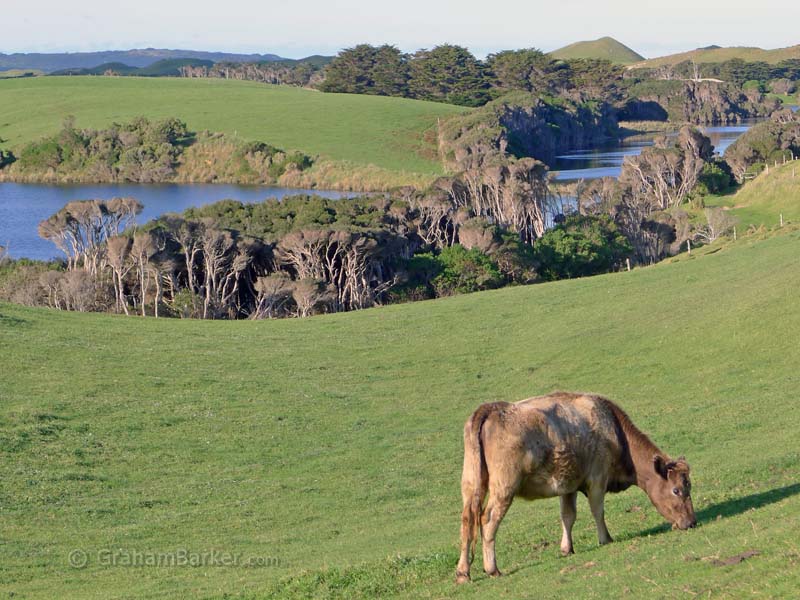 Another thing I noticed early was the habit King Islanders have of waving to each other when passing in their cars. Sometimes by lifting the hand, but usually just the index finger. While it's not unique to here, it's not something you see much of in Australia. I've only come across the habit in a few remote areas with small friendly populations who mostly know each other. I joined in, being careful not to accidentally raise the wrong finger.

Accommodation is scattered across the island, which at about 60km long and 30km wide is quite large. I chose to stay at Naracoopa Holiday Cottages on the sheltered east side of the island, in one of two small cottages facing out across a wide bay. It was above my normal Scrooge budget - everywhere on the island is - but was extremely comfortable and had everything I could possibly have needed.

Great hosts, beautiful quiet surroundings and a nice view out the front windows made it one of the best accommodation experiences I've had. It even motivated me to write a review on TripAdvisor, a habit I've been meaning to start for years. Over the course of my stay I drove past most of the other accommodation options I'd considered, and felt I had chosen well. 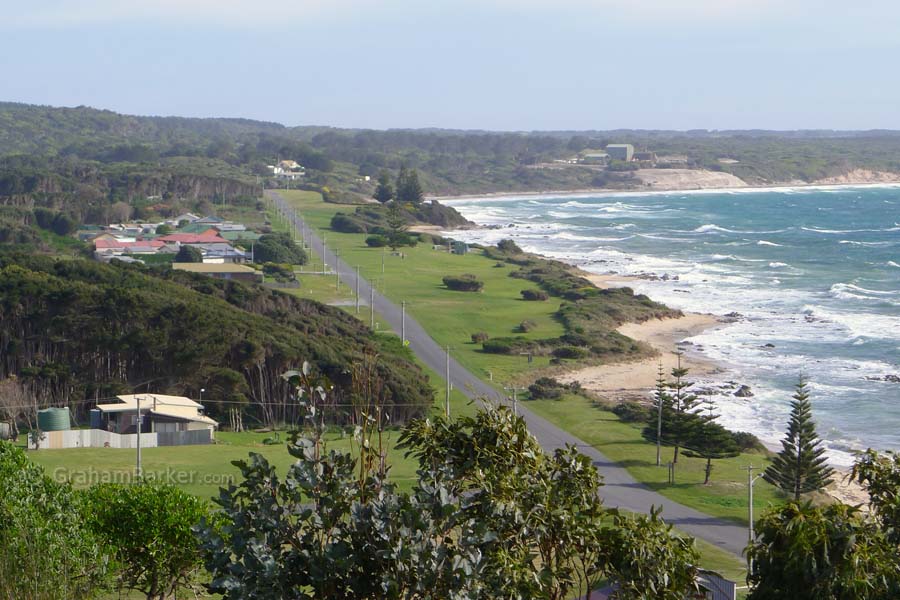 My first major destination was the King Island Dairy. Their famous cheeses are available all over Australia and I had tried many of them already. The benefit of visiting the source - apart from seeing where the cheese comes from - is that their complete range is available for tasting in one place, so you can compare them properly. And in generous quantities! I did this, and purchased some favourites for about a third of what they cost me back in Perth.

Next I visited the main town of Currie, it's harbour and nearby beaches. I was happy just wandering around and soaking up the ambience on my first day. After a very busy campervan trip ending with a visit to Melbourne, my head needed a bit of space to adjust to the calmer pace of staying in one place with a more relaxed to-do list ... on an island lacking noise, crowds and traffic.

Lack of hurry was an impression I quickly gained of King Island. That doesn't mean lack of activity - the island is very productive - but rather an absence of the impatience and sense of urgency so present in our cities. One example is when I stopped for petrol: two other vehicles drew up behind me, needing to use the same pump. In the city, the drivers would have stayed in their cars, waiting impatiently with engines running, maybe glaring if I was taking too long. Not here. The drivers switched off their engines, got out and said G'day. They saw it not as a delay, but as a welcome opportunity for a friendly chat. 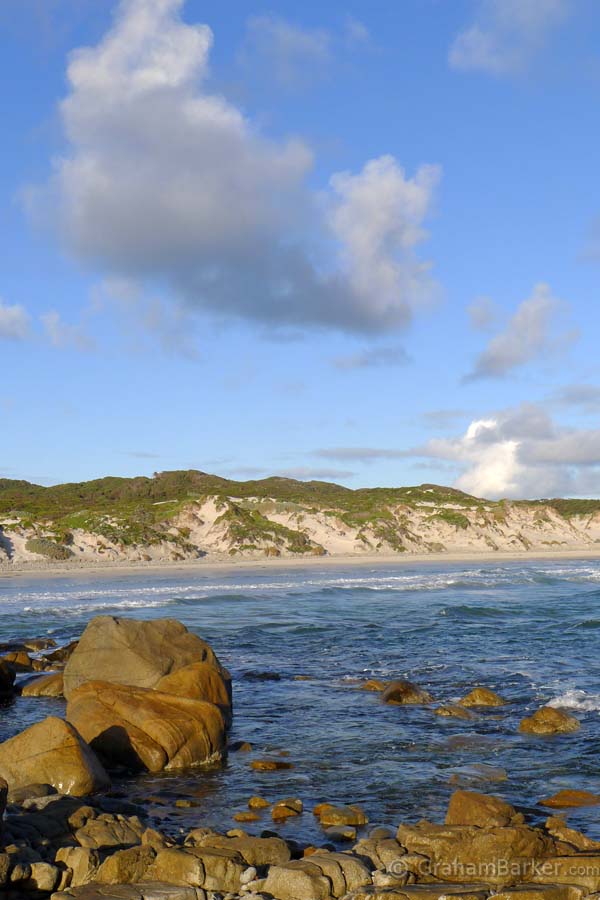 Over the course of six days I visited most of King Island, and I'll describe some specific places on other pages. Most visitors opt for shorter visits, but my earlier stay on Flinders Island had taught me to not underestimate the time needed to explore an island of that size. Six days was enough time to see the highlights in a relaxed and casual manner, with time to linger. I could have seen as much in a bit less time, but I'm glad I didn't.

Comparisons with Flinders Island were inevitable, it being "the other" big island in Bass Strait. The most obvious difference is in the landscapes. While both islands have farming, Flinders Island has hills and mountains, and much land in national parks or large tracts of undeveloped near-wilderness. King Island doesn't.

Most of King Island is undulating, not flat, but the hills are low and lacking in any great high spots. There are a couple of nature reserves, but no national parks, limited forest, and few spots with much of a wilderness feel. It has some gorgeous coastal locations, but they are mostly within a stone's throw of cattle grazing on green paddocks. 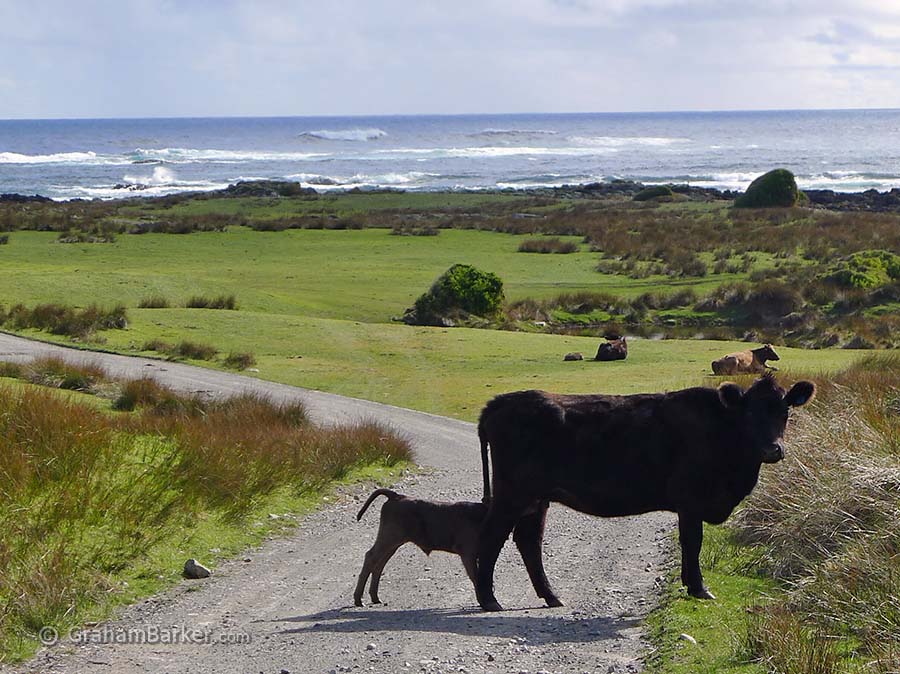 Stopping for cows on a minor road

Cattle rule on King Island. Most of the island is cleared for farming and the production of some of the best beef and milk you'll find anywhere. A few of my journeys on minor roads were held up by cows on the road, but I didn't mind. Having enjoyed their cheese and dairy treats, I was happy to give them right of way - nobody hurries on King Island anyway.

Besides beef and dairy, seafood and kelp harvesting are the other big businesses on King Island. With a higher population than Flinders Island, King Island has more businesses and more eating places, and therefore more opportunities to eat the local products.

One business I helped support was the King Island Bakery at Currie. Their range of pies featured the local beef, with some including local cheese or crayfish. My favourite contained camembert and asparagus, made personal with the knowledge that I'd probably met some of the cows responsible for the camembert. 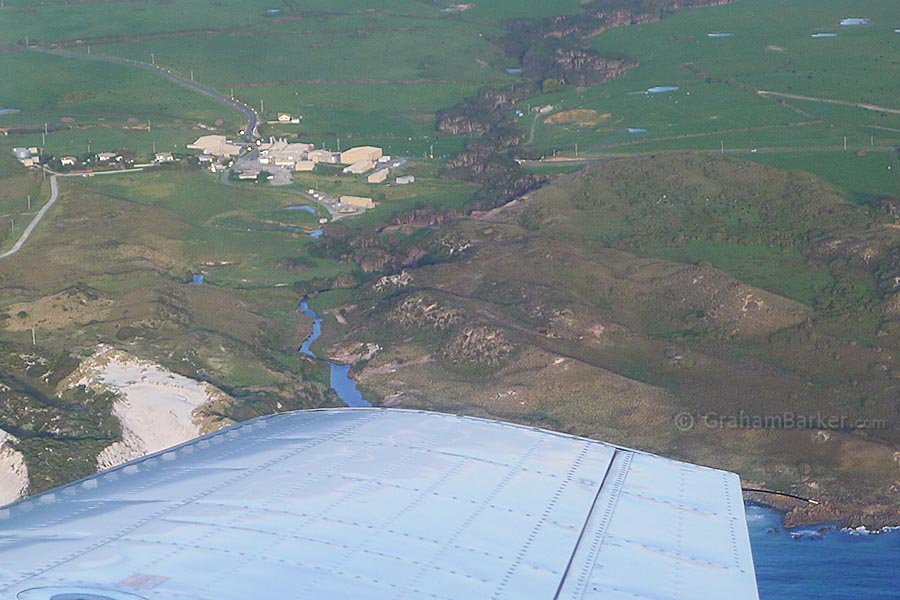 I didn't get very far through the pie menu before it was time to return to the mainland. I returned the way I had came - back to Moorabbin - but while waiting at the airport I noticed a Sharp Airlines flight arriving. Sharp fly from King Island to Burnie and on to Launceston, making it possible to visit the island as a stopover between Melbourne and Tasmania. Maybe next time.

I would recommend King Island to anyone looking for a quiet relaxed destination where tourism is small scale, as long as budget prices are not essential. There's plenty to see and eat, in a landscape which may lack wilderness but is attractive anyway. The climate lacks any extremes of temperature, although the weather can be stormy at times, especially in winter. It can also be glorious - my six days at winter's end were all mostly sunny with gentle cool breezes and no rain.

The memory that sticks with me most is the culture and ambience of the island. It has the good qualities often associated with country towns. Like friendly locals, relaxed pace, a sense of close-knit community and a refreshing feeling of safety (where leaving the keys inside an unlocked car feels perfectly normal). All on a secluded island which the residents are strongly and justifiably proud of.

It took a few days of city driving before I stopped feeling the urge to wave to other motorists. However the weight I gained from the King Island Cheese will hang around longer, and serve as a reminder of an island I was privileged to visit.

This page serves as an introduction; I've written about specific places on King Island in other pages. 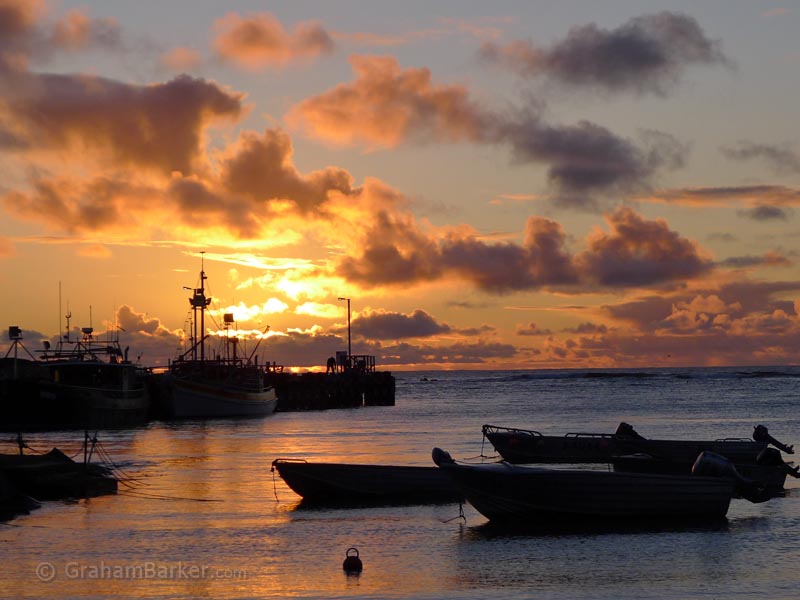 King Island Tourism - a tourism-oriented site focussing on what to do, where to go, where to stay, how to get there, etc.
King Island Regional Development Organisation - Includes tourism info, what's on, and a business directory
King Island Accommodation Cottages - where I stayed during my visit (formerly known as Naracoopa Holiday Cottages)