Lucky Bay - the far side

Anyone visiting Esperance in Western Australia would know of Lucky Bay - one of the more popular highlights of a stunning stretch of coast. The access point is at the west end of the bay, but not all visitors get to experience the different landscapes and ambience at the far east end. The lure of a slightly less travelled path compelled me to go and have a look. 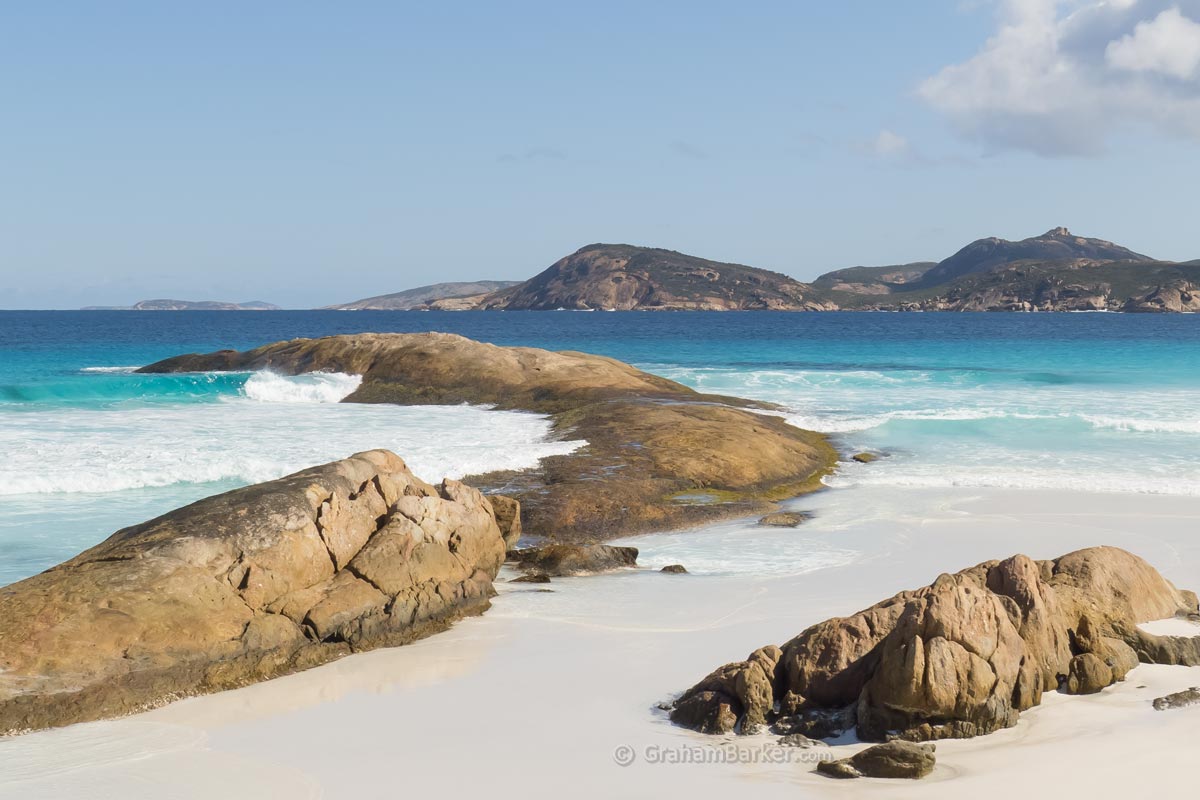 Lucky Bay from the east end

The sheltered western end of Lucky Bay has a camping ground, barbecues and toilets, and is where all visitors arrive. Some are fortunate enough to photograph the unusual sight of kangaroos laying on the beach, as if sunbathing. I saw a few kangaroos there, but they were just passing through and not stopping for a rest.

At this end the beach is wide and flat with a surface hard enough to drive a four-wheel-drive vehicle on (it's permitted here). I began walking east, following the curve of the bay. Gradually the sand becomes softer, and the beach narrows. I lost track of time, but it felt like about half an hour of leisurely walking later when I arrived at a lookout.

View over Lucky Bay from the lookout

The wooden steps and lookout platform are part of the 15km walking trail which follows the coast of the Cape Le Grand National Park. Here the trail turns away from the beach and heads uphill - starting with the steps - and then overland towards Rossiter Bay. It is also here that vehicles on the beach have to turn back, and so it marks the point where the beach transitions from a well visited beauty spot to something less explored.

Some time spent at the lookout is a good idea. It's a nice spot to sit and rest after the beach walk, and also provides a great vantage point over most of of Lucky Bay. But it's only the beginning of the less travelled end of the bay.

Beyond the lookout the number of footprints in the sand quickly dropped off. In the warmer months there would still be footprints, but I was there in late winter and soon found myself on pristine sand with no sign of anyone having been there.

Some long fingers of rock jut out into the bay like natural jetties. In rough seas it might be hazardous to walk on them, but in the mild conditions I enjoyed it was impossible to resist. The rocks provide some good viewpoints for photos, or just for watching waves crash into them.

Further on, behind a huge boulder … and I really do mean huge … are some commemorative plaques. At first I thought they were bits of plastic litter, but the small green objects signify the approximate place where explorer Matthew Flinders and his party came ashore in 1802. They spent a few days looking around, and what they saw would have looked pretty much as it does now - still natural and unspoiled.

I hadn't intended spending a lot of time on this walk and didn't take a drink bottle - big mistake! Even on a chilly day, a long walk on white sand in the sun can be thirsty work. So I was tempted when I saw a little fresh water running down the rocks near the big boulder. 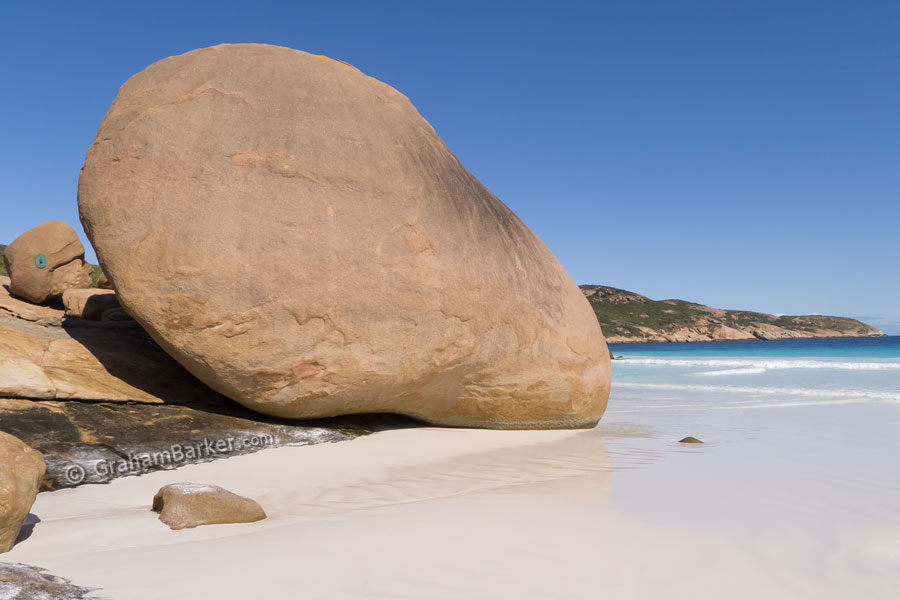 The rather large rock where the commemorative plaques are found

I took the risk of drinking from this natural fresh water, which is probably only there after good rain. Somehow it enhanced the sense of exploring somewhere pristine, and I thoroughly enjoyed it with no after effects. However, drinking from untreated sources like this is not recommended, even in national parks. Don't be like me - bring your own water!

Just past the commemorative plaques is a low headland, followed by the last stretch of beach in the bay. Beyond that is a narrow gap and then some small hilly islands, which from a distance look like an extension of the coastline.

This last beach feels especially remote, even though it really isn't all that far from the lookout further back. I sat there for a while, soaking up the lovely scene and looking for whales which are often seen between June and October. I saw no whales, but enjoyed watching a mob of dolphins frolicking. It's one of those places where it isn't hard to imagine being the first person to ever visit. If you have the beach to yourself there are no visual clues to suggest otherwise.

Why is Lucky Bay so admired, on a coast with so many other good beaches? I sometimes ponder things like that on walks. Lucky Bay has a long majestic sweep of uninterrupted beach to rival that of Wineglass Bay in Tasmania. Less symmetrical, but equally attractive. 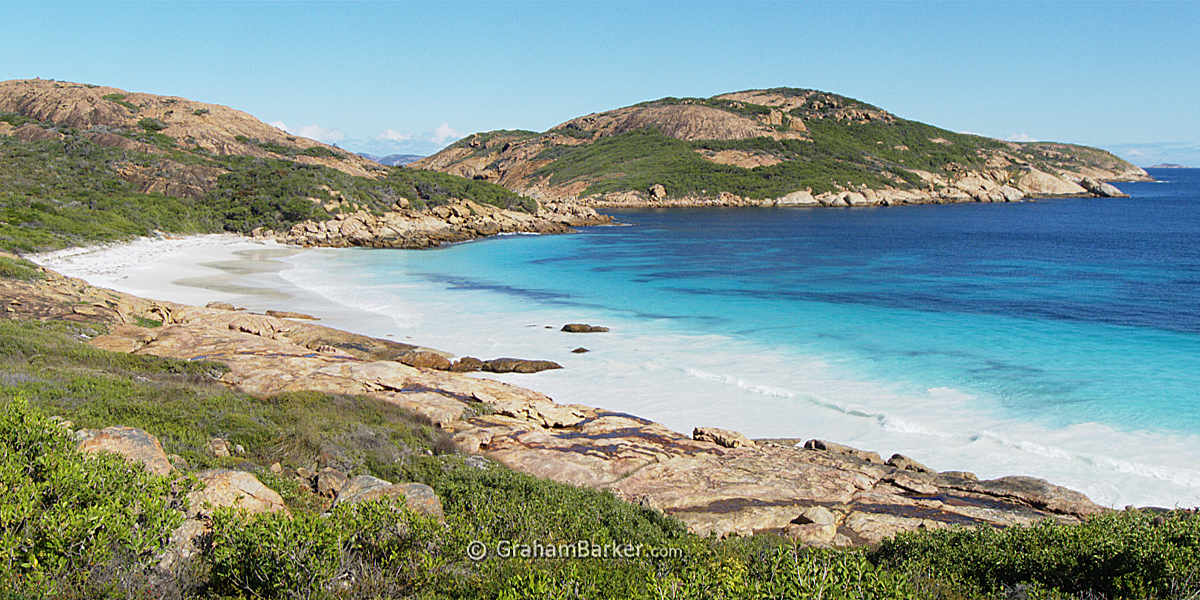 Beach at the most distant end of Lucky Bay

It also has low hills sculpted from precambrian granite - 1.2 billion year old smooth rock with streaks and some interesting shapes. Also a hint of red which beautifully complements the blue water and sky, green vegetation, and the white of the beach and any clouds. Then there's the clean sand, wildflowers, and lack of development other than the basic national park facilities.

The far east end of Luck Bay has all that, and something more. For me it has a special feeling of being even more remote and unexplored than the well visited western end, as lovely as that is.

If that appeals to you, and you’re visiting Lucky Bay, I'd encourage making the time and effort to walk at least to the lookout, and as far beyond that as you can. Just remember to take a drink bottle, and be prepared to lose track of time and take longer than planned.

East side of Lucky Bay from the road 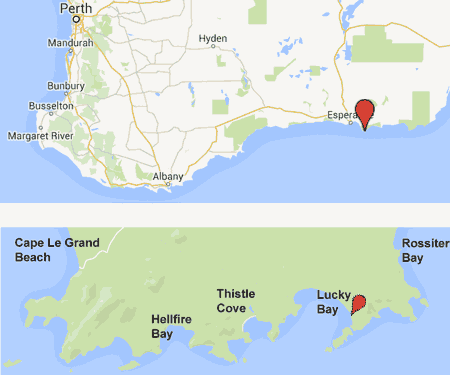