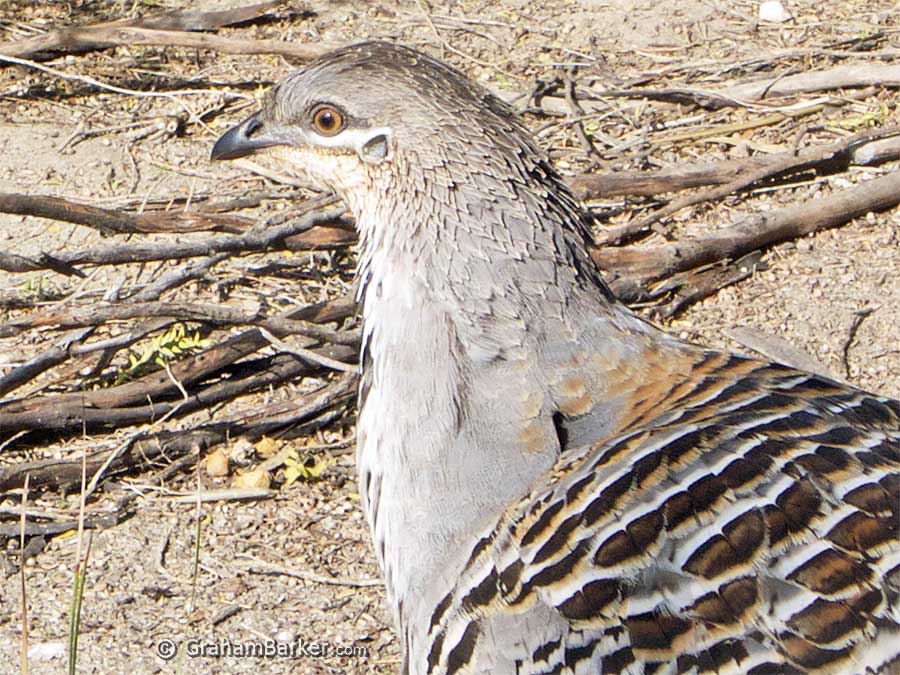 Where is Ongerup, you may be wondering? Most West Aussies probably couldn't point to it on a map quickly, and hinting that it is between Gnowangerup and Jerramungup is unlikely to help much. For most travellers the tiny southern wheat belt town is just not on the way to or from anywhere, and seldom visited.

If you head north-north-East from Albany, you'll get to the Stirling Range after about an hour. Keep going another half hour and you'll be at Ongerup. The Yongergnow Malleefowl Centre is well signposted and just off the main road.

Malleefowl live on both sides of Australia, in the drier and mostly inland areas of the south. Much of this coincides with areas cleared for farming, which is why they are now at risk or endangered. Not just because have they lost habitat, but also because they are birds who need a bit more space on account of their nesting habits. 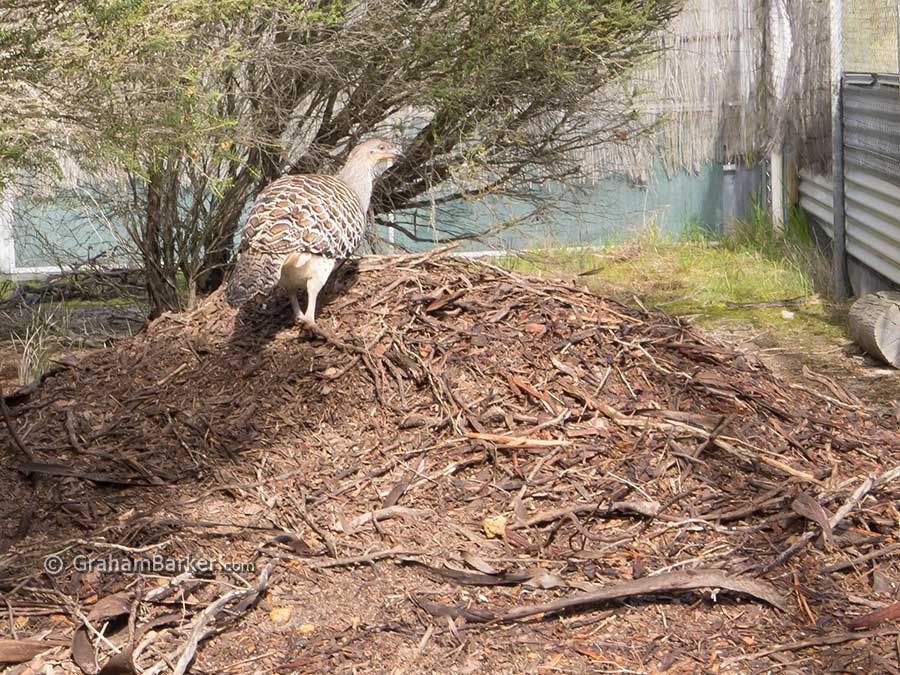 A malleefowl on its mound

What makes malleefowl distinctive is the way they build nests on the ground, rather than in trees. They will dig a small hole, fill it with twigs and leaf litter, then pile more twigs, leaves and soil on top until they have a mound about four metres across. That's a huge construction job for a bird not much bigger than a chunky chicken.

The mother then puts her eggs inside the mound, but instead of sitting on them like other birds, the eggs are warmed by the heat generated from the slow composting of the material in the mound. By adding and removing soil according to the weather and the warmth generated by composting (which eventually reduces), the birds keep the temperature inside close to 33 degrees ... which they monitor with their very temperature-sensitive beaks.

But the planning starts earlier. The mother will eat extra nutrients before laying an egg, and will vary the number of eggs according to the conditions, such as rainfall and the length and timing of the previous summer. Then she will stagger the laying of eggs so that the chicks don't all hatch at once; this improves their survival chances.

All that planning, building and the upkeep of the mound is rewarded by maintenance-free offspring. Once the chicks hatch they are able to fly and feed themselves within a day, needing no further care from their parents ... who by that stage deserve a break! 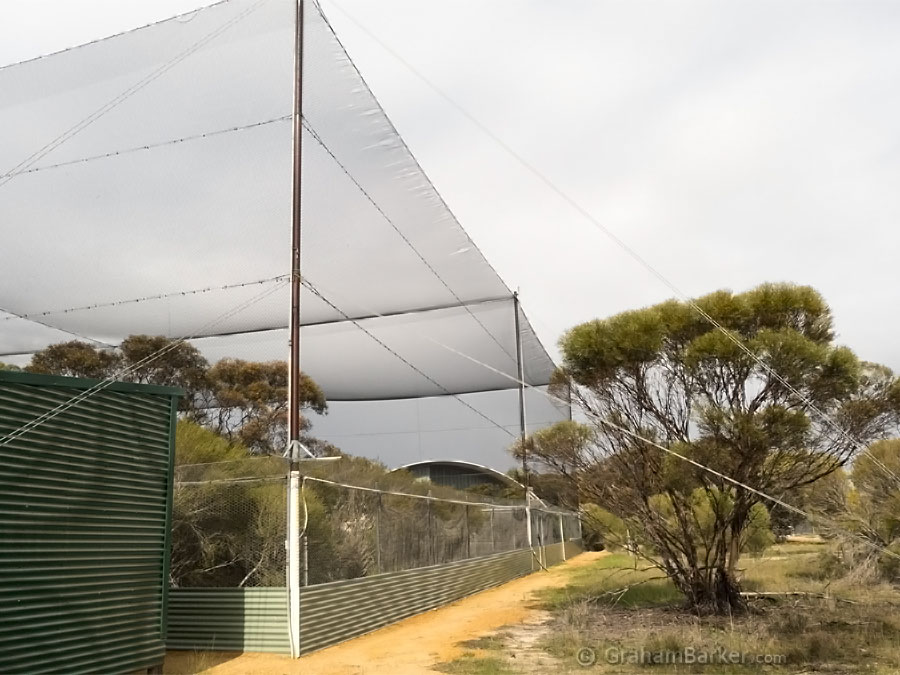 One of the two large enclosures 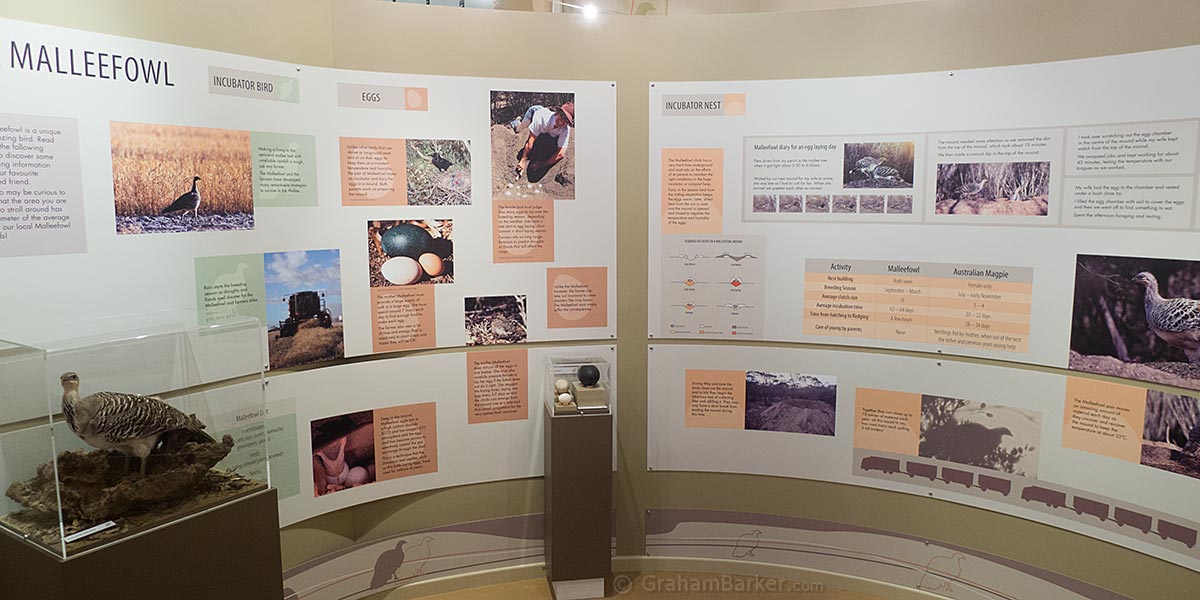 The story of the malleefowl is told at the Yongergnow centre with professionally produced and well illustrated display panels. Informative, but not in a dry way. Also told is the story of local farmers who became concerned at the loss of malleefowl, and what they, and others, have done about it.

Inside the centre is also a small cafe, which on my visit was doing rather good home made pies and some great coffee, among other things ... that could be another reason to stop by.

You also get to see the elusive creatures, in two large aviaries outside the centre where their mallee habitat has been recreated. I noticed six of the birds and a mound, and although they were a little shy I managed to get a good look by staying still and quiet.

The malleefowl were once more common, and the town and shire of Gnowangerup (in which Ongerup is located) is named after them - "gnow" being the Aboriginal name for the bird. Nowadays the Yongergnow centre may be the only place most people will get to see any, and if passing that way I would recommend it. 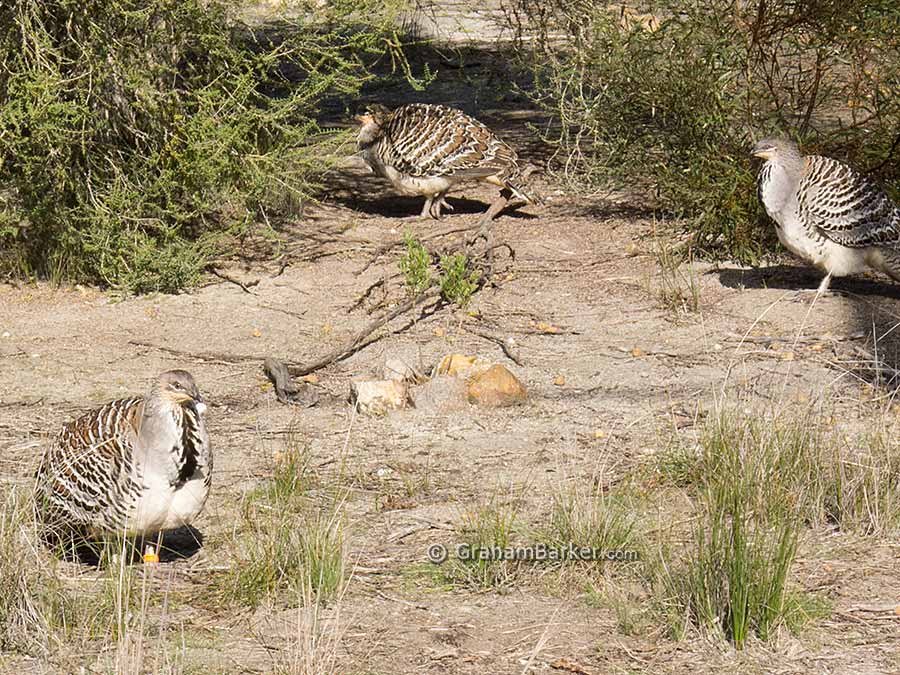 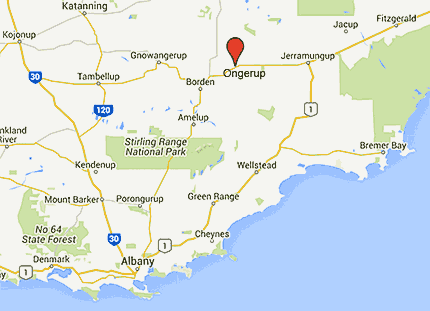