Not long ago I was passing by Wave Rock, one of Western Australia's well known attractions, and so I dropped in for a look. But the famous rock wasn't the highlight of that day for me: instead it was a less-visited site not far away, known as Mulka's Cave.

Most tourist literature on Wave Rock mentions other things to visit in the area, and one of these is Mulka's Cave. Tour buses do stop there, however Wave Rock gets nearly all the attention, leaving Mulka's Cave relatively overshadowed. If you've driven all the way to Wave Rock - and it's a long way from anywhere - it's a pity not to go a little further and see something unique.

Mulka's Cave is about 18km beyond Wave Rock, near Hyden in Western Australia's wheatbelt. Much of the road there is sealed, and the last gravel section is good. What you find at the end of it is a low hill of granite with a small cave at its base - looking a little like the mouth of a whale shark.

Entering the cave involves just a short walk along a flat path, then up a gentle ramp to a platform. There's no fee - you just turn up and go in. The cave isn't large, and doesn't have stalactites (it's granite), but if you look closely at the walls and ceiling you'll see what makes this little nook different - an assortment of ancient Aboriginal cave paintings.

At first there doesn't appear to be much to see, but once your eyes grow accustomed to the low light, images become clearer. There are hand stencils, plus depictions of the animals used as food in this area. Some are hard to spot and may require some manoeuvring up the sloping floor in order to better see out-of-the-way parts of the ceiling. The harder you look for the markings, the more you see.

The art in Mulka's Cave is believed to be around 3000 years old according to a WA museum report I read. On the other hand, another internet source claimed 30000 years, and the Aborigines would have been around back then. In any case, the cave paintings are very old. They are also associated with the legend of Mulka, an ancient character whose story you can read all about at the cave.

There are also some pleasant walks from the car park, which complement the cave and make a visit even more worthwhile. My legs definitely appreciated a walk after a long drive.

A short loop trail passes through a range of local vegetation, and reveals fine examples of a gnamma hole and a lizard trap used by Aboriginals in millennia past. The gnamma hole is a rock waterhole which retains water long after rain, and the lizard trap in this case is simply a slab of granite propped up on stones. They may be basic, but features like these helped the Aboriginals thrive, and there are information signs to fill you in on the details.

So if you're visiting Wave Rock, I can recommend going a little further to Mulka's Cave. You won't just see ancient paintings - you'll get an interesting glimpse into a culture that was around long before any Romans thought of starting an empire. 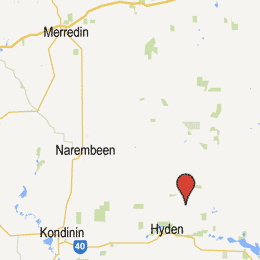 See footer for links to interactive maps
Short link for this page: rdu.pw/144