Snow in the streets of a town, an uncommon sight down under

Snow is no stranger to parts of Australia and New Zealand, but it usually falls up in the mountains and seldom encroaches on urban habitation. On the odd occasion when a town receives winter snow it can be something of a delightful novelty ... as I found when the New Zealand town of Naseby briefly wore a white wintry coat. 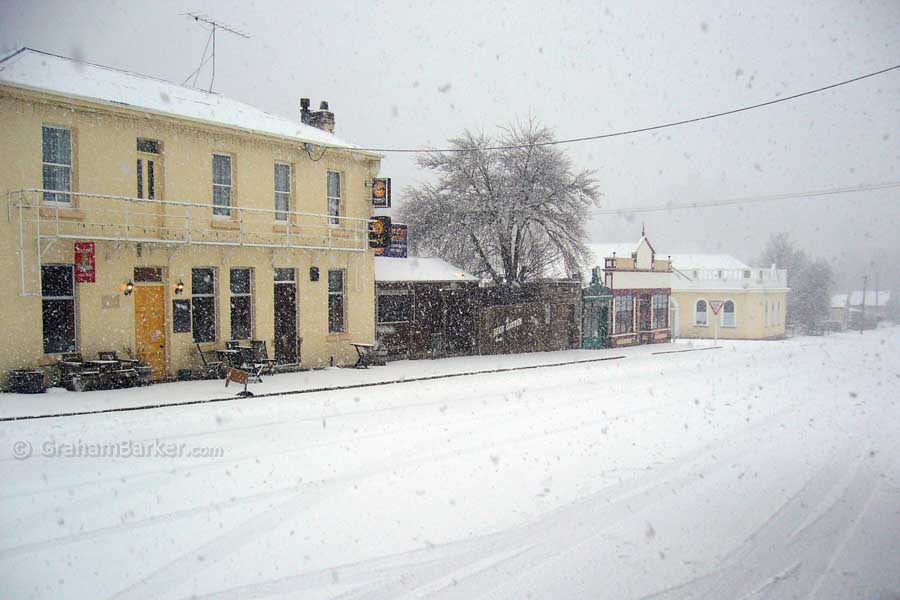 To get to the small rural town of Naseby I headed inland from just north of Dunedin - over some mountains and onto the Maniototo plains near Ranfurly. Naseby is in some foothills, and with an altitude of about 600 metres it is no stranger to snow. But snow is not the norm. While it snows regularly each winter, and occasionally in warmer months, the snow doesn't hang around long. For the majority of the time it is snow free.

It was snowless when I arrived, but cold. Naseby has become a centre for the sport of curling thanks to its cold winter nights and the tendency of outdoor water to freeze. This provides frozen surfaces sometimes thick enough for an activity that, to me, vaguely resembles lawn bowls on ice. But don't say that to someone who plays it. 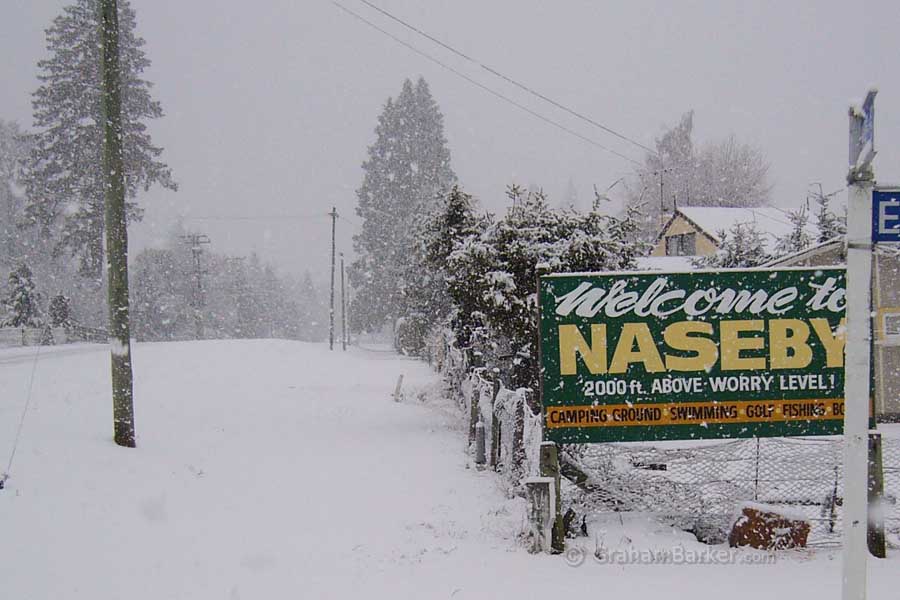 The inside of the cabin I stayed in was barely above freezing with just one feeble bar of electric heating, so I wasn't surprised to look out the window next morning and see snow falling. Watching the snow pile up from indoors was picturesque, but when faced with the novelty of snow in a built up area, there was only one thing I could do: go for a walk.

I felt blessed. The snow had accumulated long enough to look beautiful, yet I was out in it early enough to make first footprints and enjoy that crisp unblemished look - before any snow clearing, or the inevitable thaw.

Simply walking the streets was enjoyable, seeing regular everyday domestic scenes take on a delicate snowy mantle not commonly encountered in this corner of the planet. A country pub may be a ubiquitous sight - but not with snow on its roof. 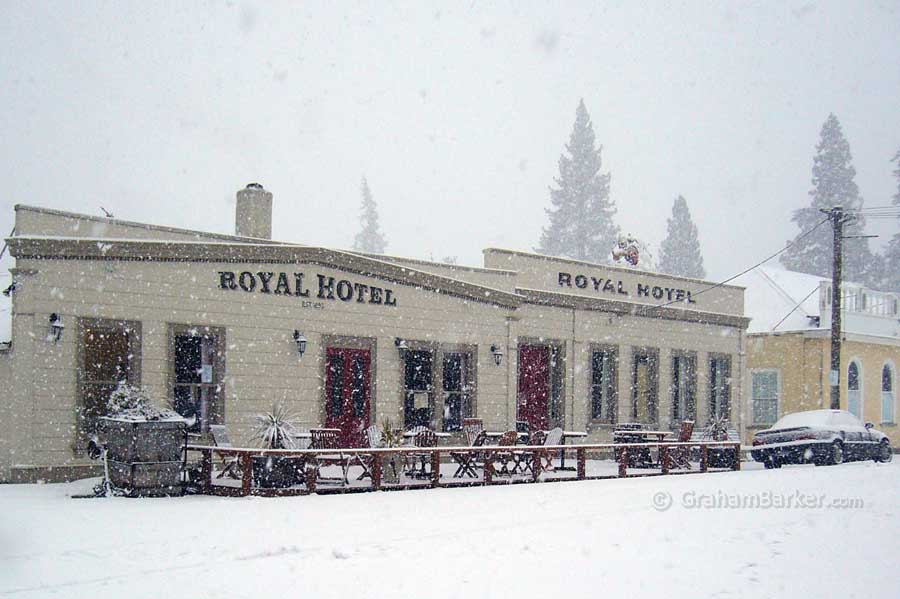 I didn't see many others out walking; those who live in Naseby would be accustomed to seeing it snow here. But when I replenished my caffeine levels I found many locals had congregated in the cafe and were discussing the weather with some enthusiasm. Apparently the snow was affecting many roads in the region, with a few hairy driving stories being shared.

Being on holiday, I conveniently didn't need to drive anywhere, so I continued walking. Apart from curling, Naseby is known for a good collection of mountain biking trails through the surrounding hills. I walked randomly up one, finding a flat path following an aqueduct along a contour. Walking on snowy trails through snow-dusted trees reminded me of a snowshoe trail I walked in Colorado, except that the Naseby snow wasn't deep enough to need snowshoes. 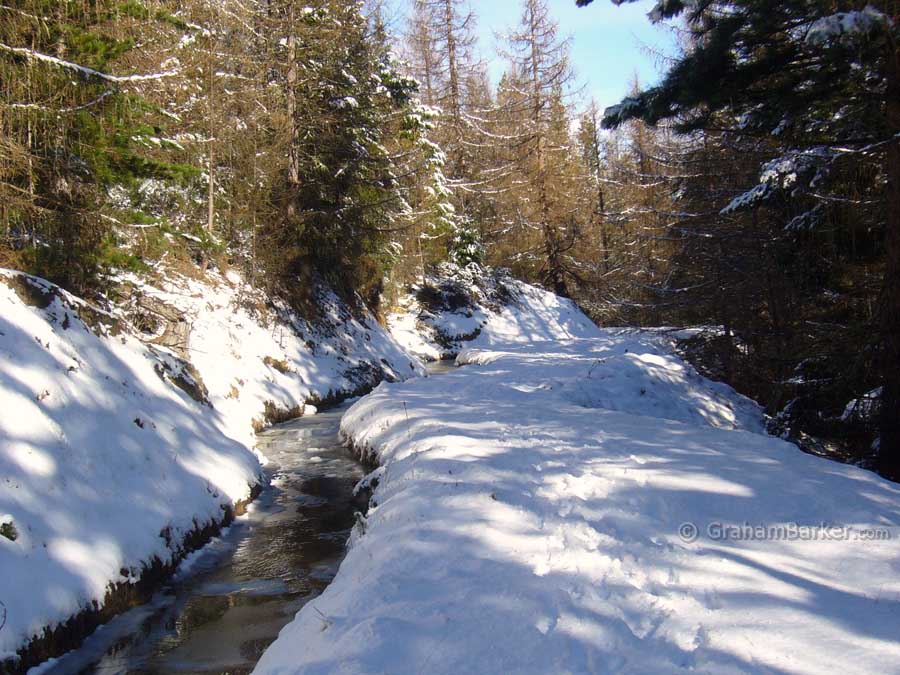 In the hills above Naseby

Eventually a snow plough swept the streets and scattered grit, and by afternoon the snow began its inevitable thaw. Snow lingered in places for many days, but the period of fresh new snow falling had ended for now. I retired to my still-freezing cabin to review my photos.

People from colder countries may wonder what's so special about a town getting snow. It may be a mundane sight in Canada or northern Europe, but here in Australia and New Zealand it is the opposite of what is normal. There is a sort of unwritten demarcation. Snow falls in the mountains, national parks and ski resorts, while people live down below, in places where it doesn't snow. A few places, like Naseby, occupy the zone in between.

Normally we have to go up to the snow; it doesn't come down to us ... so it is a novelty on the odd occasion when it does briefly visit. 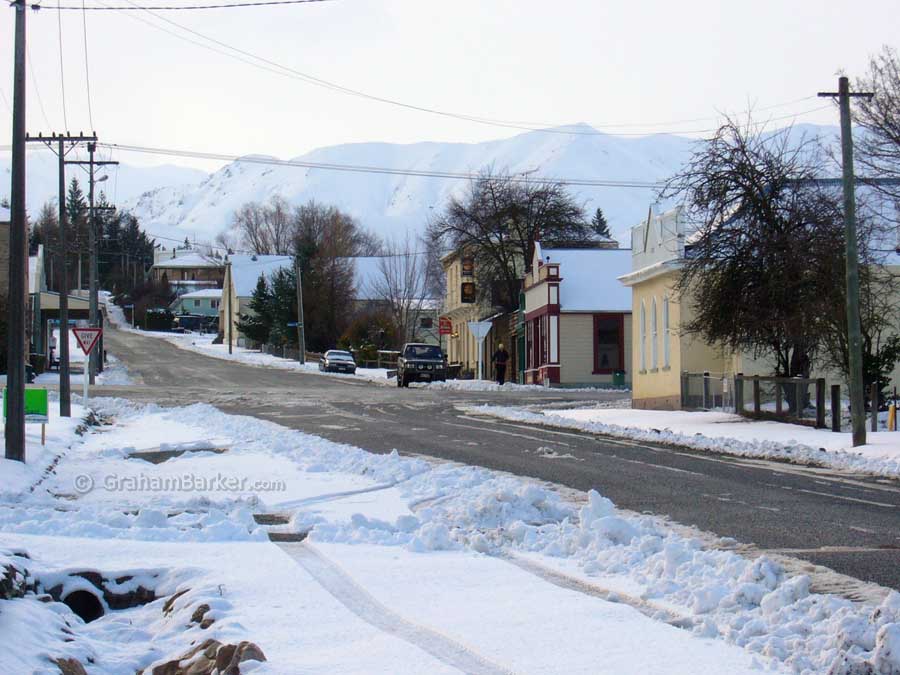 After the snow plough, the thaw begins

The hills behind Naseby, viewed from farmland nearby 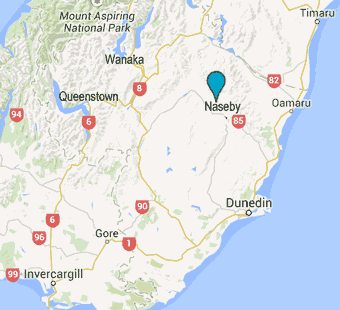