Where is a good spot to watch planes taking off and landing at Perth Airport? In the past, officially sanctioned viewing was limited to the international terminal's observation deck, or the windows in the domestic departure lounges. Or else you could look through a fence and hope not to look suspicious. However in December 2011 Perth Airport opened an outdoor public viewing area close to the end of the main runway. Since then I have road-tested this new viewing area many times to see whether or not it is a plane spotter's dream come true. 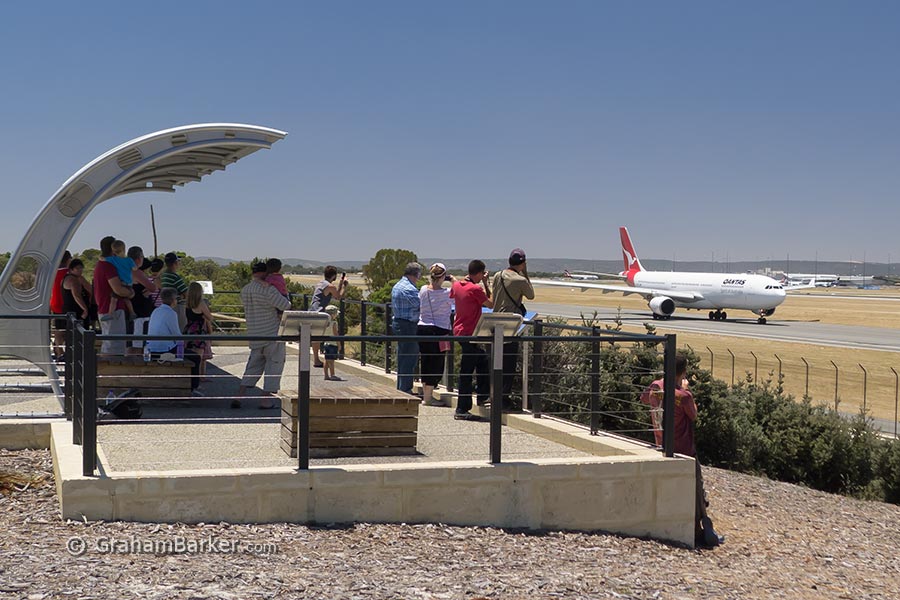 Upon arriving at the small viewing area car park, the first advantage struck me. It is free ... unlike the viewing windows at the terminals which can involve paying through the nose for parking, something I was grateful to avoid.

From the car park it is a few minutes walk up a nicely landscaped - and wheelchair accessible - ramp to what is basically an elongated sand hill. A paved area on top of the hill is enclosed with railings, and has some shade and basic seating.

There are some information panels which include illustrations and details of the planes most commonly seen here. If you're not sure how an A320 differs from a B737, these panels will help you identify them. The surrounding area is covered on top with a woodchip-mulch suitable for walking on. I've found this handy when the paved area is crowded and needed some space for unobstructed photos.

When I've been there the place has been very well used by a steady stream of visitors. Some casual viewers like me, and many people meeting or seeing off friends or relatives who were travelling. It is also popular with serious plane spotters - giveaway signs being the very long camera lenses and receivers picking up air traffic communications. 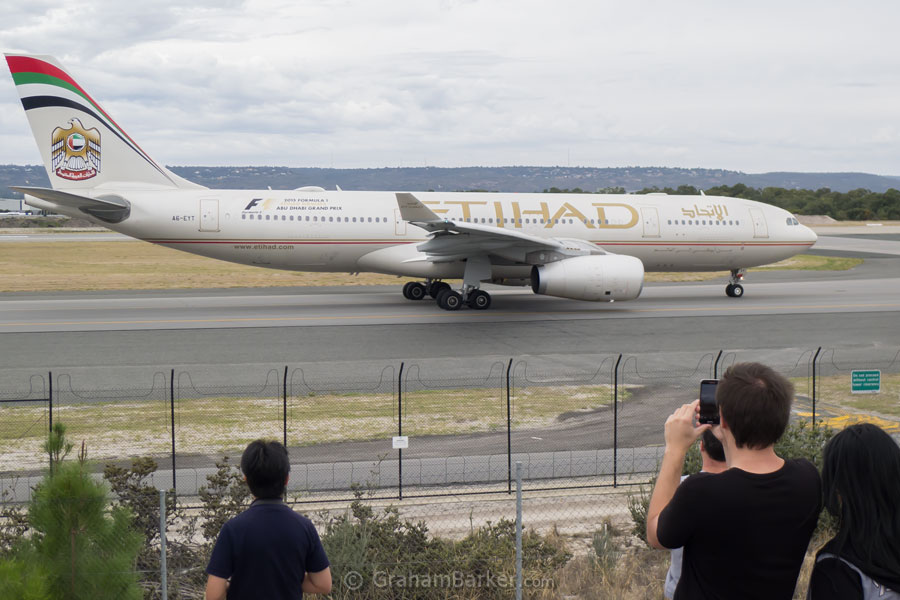 Etihad A330 taxiing past the viewing area

What can be seen 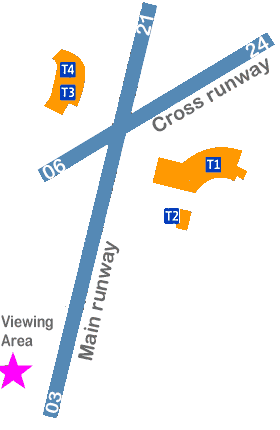 The viewing area sits at the far southern end of the main runway - runway 03/21 (aligned to compass bearings of 30 and 210 degrees). The sand hill it sits on is high enough to give unobstructed views over the southern portion of this runway, which is only 300 metres away at its nearest point. One of the taxi ways is much closer. Terminals T1 (international) and T2 are visible in the distance on the other side.

Equally important is what you cant see. The northern portion of the main runway (3.4 km long) is either partly obscured by trees, or so far away that little can be seen. The shorter cross runway (06/24), and terminals T3 and T4 (domestic) are not visible at all.

This means that only aircraft using the main runway 03/21 can be seen from the viewing area; fortunately this is the runway used most often. Exactly what you see of planes arriving or departing on 03/21 depends on which direction planes are taking off and landing in. The viewing area will be either good for viewing take offs, or good for viewing landings, but not both ... and sometimes neither.

Taking off towards north-northeast: best for watching landings

In these conditions the viewing area provides a fantastic view of planes landing. All but the smallest tend to land as near as possible to the start of the runway - which is right in front of spectators. You get an excellent view of them flying low, and are close enough to often smell the burning rubber when they hit the tarmac.

Unfortunately, the viewing area is in the wrong spot to provide a good view of take-offs towards the north-northeast. Most aircraft don't need the full length of the runway, and will save time by not travelling all the way to the end - where the viewing area is. Instead they enter the runway much further down, usually out of view, and leave the ground towards the opposite end. Some will use the short cross runway to take off and not be seen at all.

Occasionally, however, an aircraft needing maximum take-off room will taxi all the way to the runway's end and begin its acceleration from in front of spectators. This can provide a close up view as it passes by just across the fence. It will be far away by the time it has gathered enough speed to lift off, but it can be impressive to hear and sometimes feel the engines going from idle to full thrust right in front of you as it starts moving. 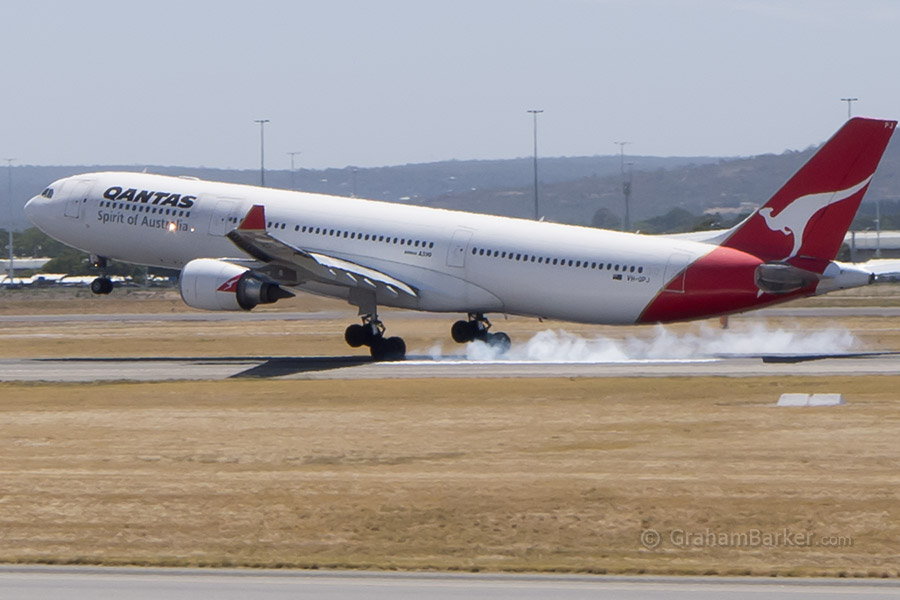 A Qantas A330 touching down 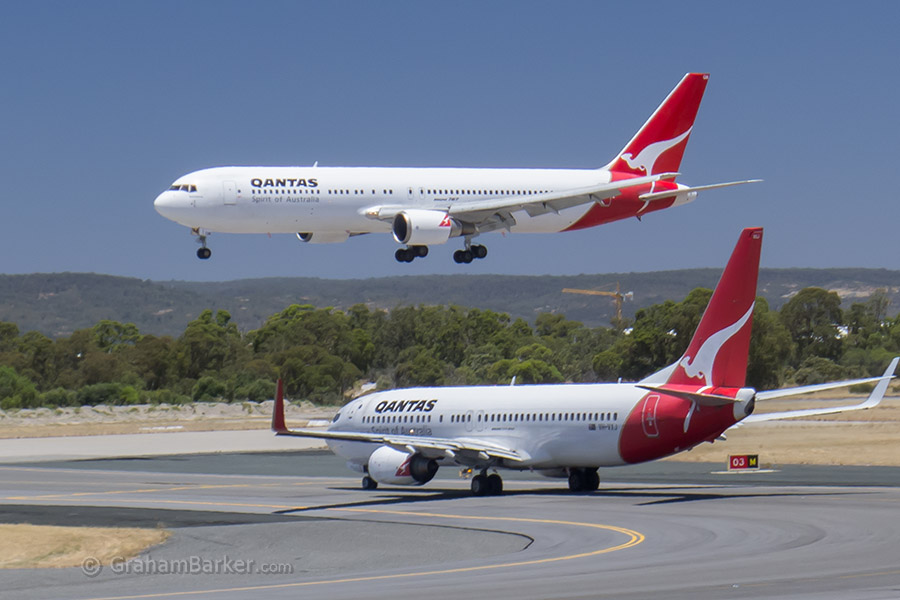 Taking off towards south-southwest: best for watching take-offs

Planes on the main runway will take off and land towards the south-southwest when winds are coming from somewhere in the south to west. This is most common in the afternoons when sea breezes blow. In this situation the public viewing area provides excellent views of aircraft as they leave the ground and start their climb.

Small aircraft may already be airborne when they come into view, but will still be flying low as they pass. Larger aircraft, which need more runway to get off the ground, leave the ground closer to the viewing area, and are often still retracting their undercarriage when they roar past spectators.

On the other hand, landings towards the south-southwest are not well seen from the new public viewing area. Planes tend to touch down as near as possible to the opposite end of the runway, and most will have slowed down and left the main runway before coming into view. Those landing on the shorter cross runway won't be seen at all.

What happens when there is no wind, or crosswinds? I'm not sure what the official guidelines are, but from my observations it appears that taking off and landing towards the south-southwest seems to be the default when there is no wind, or the wind doesn't favour any particular direction. Strong crosswinds from southeast or northwest may encourage more use of the shorter runway where possible. 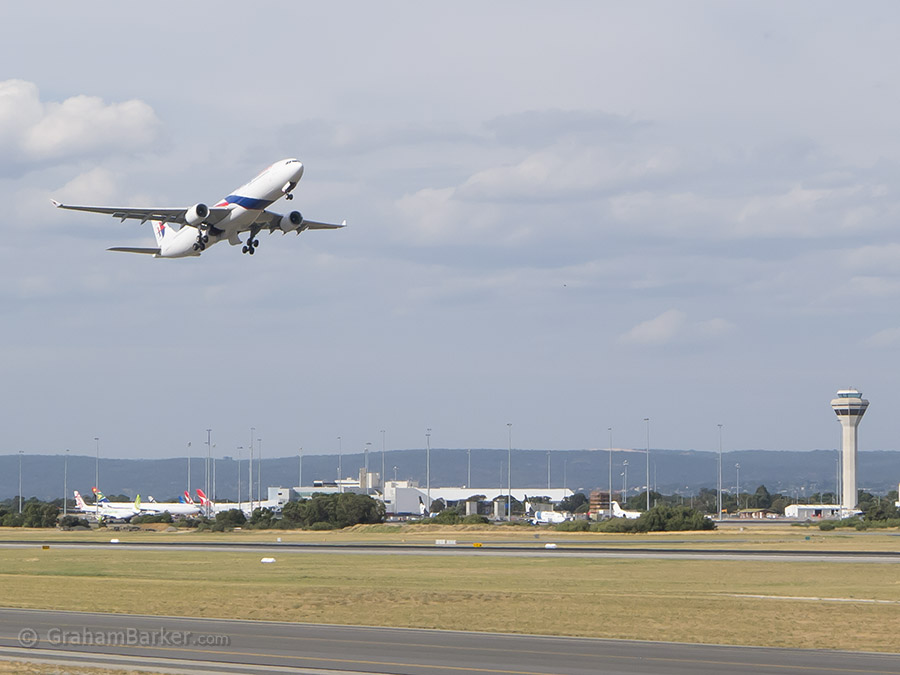 Malaysia Airlines A330 after take-off

I think the new public viewing area is a wonderful facility for anyone interested in watching planes take off and land from close range. There are some limitations such as restricted views of some aircraft movements, and the fact that it is only open during daylight hours. But this is compensated for by being outdoors and having free parking - you don't have to pay exorbitant fees to look through the grubby windows in the terminals. Perth Airport has done a great job recognising the demand for such a viewing place, and I congratulate those responsible for building it.

Watching planes take off into a sea breeze is excellent. But in my opinion the public viewing area really shines in east to north winds when planes approach over Kewdale and touch down right in front of the viewing area.

This viewing area may not fit the "roads less travelled" theme of this website, but I felt compelled to include it. Watching big aircraft landing or going up can stir the spirit of any traveller, and Perth has a great location to experience this. 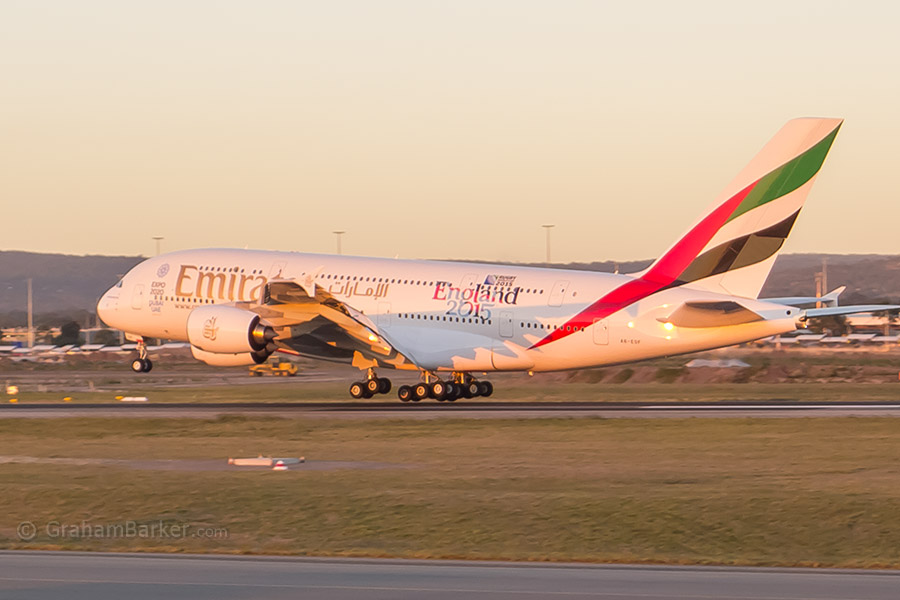 Emirates A380 landing just before sunset

The most direct access is via the Dunreath Drive exit from Tonkin Highway, which is the only exit between Great Eastern Highway and Leach Highway. Shortly after exiting, turn right at the roundabout and keep going until the road terminates at the viewing area car park.

The viewing area can also be reached by driving along Brearley Ave (from Great Eastern Highway) towards the domestic terminal, and turning right into Dunreath Drive at the first roundabout. Look for the big white-on-brown signs with the words “viewing area”. 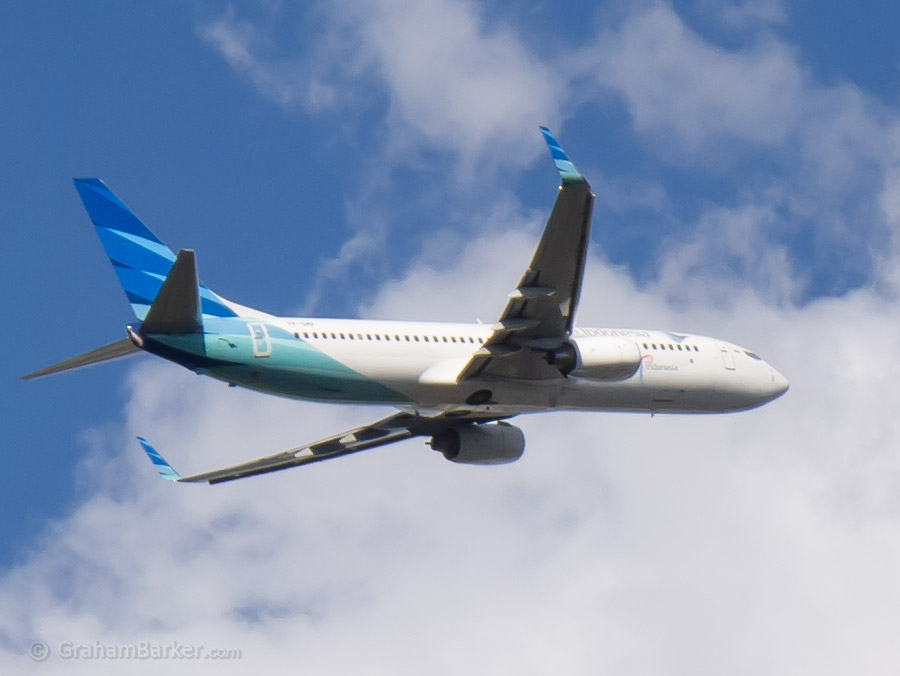 Here are some links for finding out what flights are coming and going, and for working out which direction the main runway is being used in.

A look at the public viewing area near the south end of Perth Airport's long runway, and some of the landings and take-offs that can be seen from there. Footage was shot on different days and wind directions and is not shown in order. Includes some speeded up, slowed down, and time-lapse parts shot on my phone ... because I was experimenting! Anyone with a long lense or up-to-date gear can get much closer shots than I did.
Music: Gaining Ground by Leon Ayers Jr. 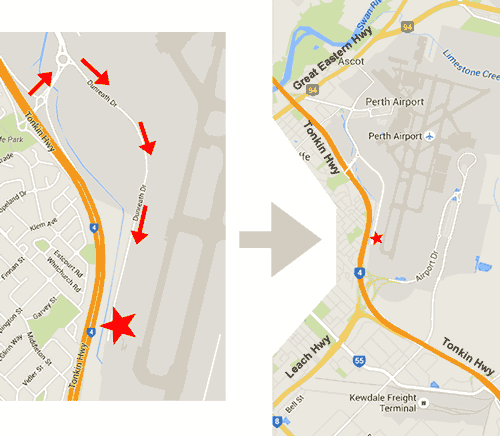 Related pages - None of the above