There's nothing wrong with photographing the city from Kings Park. Everybody does it, but for good reasons. The expansive view over the city, river and suburbs to the hills is truly superb, including at night time. It's a great place to start, but photography enthusiasts with time and transport may wish to try one or more of the following as well. See bottom of page for location map.

Many tourists come to this natural freshwater lake as part of tours. It's a good spot to see black swans, although they mainly hang out at the southern end.

Lake Monger's northern end has lovely views across the waters of the lake towards the city buildings. Native trees along the eastern side obscure the freeway, and trees and vegetation hugging the lake shore provide plenty of framing opportunities. Including native plants in the foreground or sides of a photo provides contrast with the steel and glass buildings, and can emphasis Perth's connection with nature - we haven't entirely built over it yet!

The views can look good here any time of day. The visible sides of the city buildings are sunlit for most of the day, and in the afternoons the sun lights up the east-side trees as well. Dusk can be glorious. The photos shown here are some of my favourites, although the combination of winter lighting and still water is not typical.

Lake Monger's north end has a large car park entered from Powis St, just west of the Mitchell Freeway, and another in Dodd St off of Harborne St. Or else you can use various other access points to the 3.5km walking path which encircles the lake, and go for a walk.

The path around Lake Monger is connected to Britannia St in the suburb of Mt Hawthorn by a footbridge crossing the Mitchell Freeway. This bridge provides a view of city buildings with the freeway curving towards them, not quite like any other view in Perth. It's very urban: nine busy lanes of traffic plus two train tracks constantly ferrying people between city and suburbs.

Variations are mostly obtained by visiting at different times of day, in different light or cloud conditions, or with differing amounts of traffic. Trains can be included in photos if you time it right ... not hard to do in weekday morning and evening peak periods when there may only be a few minutes between them.

It can be a good spot for long exposures at dusk or night, capturing light trails from the freeway traffic. Late autumn and winter week days are good for light trails, as it gets dark before peak traffic has thinned out. People walking or jogging over the bridge can cause enough vibration to blur long exposures, so it can pay to wait for a quiet moment.

This footbridge can be combined with a visit to the northern end of Lake Monger, which is only about five minutes walk from the bridge. If you feel like a walk, parking near either spot and walking to the other, then back, takes not much longer than driving between them.

In my opinion, the drive along Mounts Bay Rd into Perth city is one of Australia's most scenic approaches to a city centre. One of its many attributes is the view of the city buildings with the Narrows Bridge and river in front, and Kings Park to the side.

This view can be photographed at leisure (not while driving!) from the walking and cycling path which follows the river's edge. The easiest way is to drive out of the city and park in the first car park on the left after passing the old Swan Brewery building (about 400 metres past it).

From the small car park, walking along the path a short distance back towards the city provides some good viewpoints. To vary the composition there are a few shrubs near the path, and the brewery building with Kings Park behind it. If you wait long enough a boat or two are likely to pass through the scene.

Turning right into, or out of, this car park is not possible. If approaching from the west (heading towards the city) it's necessary to go past the brewery and do a 180 degree turn at the roundabout in order to approach it from the other direction.

The Swan River foreshore at Matilda Bay - across the road from the University of Western Australia - is a popular spot for picnics and swimming. Parts of the grassed area can be hired for functions such as weddings, which is not surprising for such a pleasant setting.

For city photos, there is no single obvious best spot, but the end towards the Royal Perth Yacht Club is a great place to start. Photos could include many yachts in the foreground, or just a few. There are narrow sections of beach sand, grass, and a variety of tree trunks and branches that could be used for framing. Two small jetties can also be included ... or avoided.

In other words, there is much potential for different types of shots. More time spent wandering around will reveal more possibilities.

It's a pleasant spot at any time of day, but the lighting can be especially attractive around late afternoon towards dusk. In good weather, this time of day is when the free gas-fired barbecues are well used ... you can take photos and "throw another shrimp on the barbie".

There is plenty of parking along Hackett Drive, but fees or time restrictions apply so be sure to read the signs. Some university car parking can also be used after 5 pm and on weekends - check the signs.

Catamarans for hire at end of Coode St

The southern edge of the Swan River in South Perth has magnificent views across the water to central Perth. After Kings Park it is probably the next most obvious location, and justifiably so. The whole shoreline can provide scenic viewpoints, but I've focussed on three of my favourites.

The Coode St jetty area provides an almost full frontal view of the city skyline, but slightly angled from the central part. In suitable weather small catamarans are hired from this area, so photos could include people sailing on the river.

You could even hire one and get photos from on the river ... if getting wet isn't a problem for you or your camera gear. I've discovered on more than one occasion how easy it is to make one of these catamarans capsize. It doesn't take much wind - just poor sailing skills.

There is a good amount of free parking here, though it can be busy in good boating weather.

From next to Narrows Bridge

Another favourite of mine is the edge of the river right next to the Narrows Bridge. This gives a closer view of the central part of Perth, and is especially nice later on sunny afternoons when the low western sun (for most of the year) casts its golden glow on the front of the buildings. Sometimes reflections of the lit-up buildings are visible in the river, if the water isn't too ruffled.

It is also the closest of my chosen viewpoints to the city centre, and the one where some zooming or cropping is least needed to improve the composition.

There is a small car park right under the bridge, though it can be easily filled by people fishing or water skiing. More street parking is nearby, but pay attention to signs as time limits apply.

Not far to the east of Coode St jetty is a small car park providing easy access to the foreshore and its park land. This one is reached from Hurlingham Rd and has a more eastern perspective of the city, emphasising the extent of the high rise apartments springing up in East Perth.

What distinguishes this viewpoint, apart from the different angle on the city, are the wetlands. Tiny lakes near the river edge are ringed with reeds and shrubs, and can attract much bird life. This creates opportunities for photos framed by trees, or with scenic natural foregrounds. A bit like at Lake Monger, but with the city skyline closer and more extensive.

These and other spots on the South Perth foreshore are usually better early or later in the day when the sun is to the side ... rather than in the middle of the day when it is in front of you, but behind the buildings.

Perth and East Perth from near the end of Hurlingham Rd, South Perth

Night photos of the lights, and their reflections in the river, can also be good from here. The river doesn't need to be completely calm (it rarely is) as the lights are strong enough to provide some form of reflections on a ruffled surface.

These are just seven of my favourite viewpoints which are not hard to get to. But there are plenty of other great spots out there … hopefully my examples will encourage locals and visitors alike to keeps their eyes open for them. 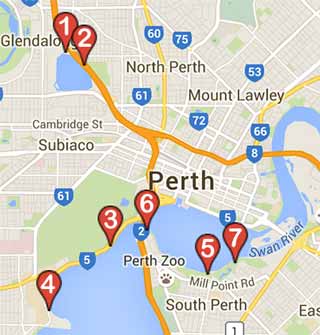 See footer for links to interactive maps
Short link for this page: rdu.pw/254