A short walk on the Otago Central Rail Trail with a gorge, a viaduct and two tunnels

The Otago Central Rail Trail is not just a great route for cycling - parts of it are great for walking too. There's a section I rather like which takes in two tunnels and a grand old bridge through and across the Poolburn Gorge. It provides a few hours of easy walking through the rugged and dry schist hills which give this part of New Zealand their character. 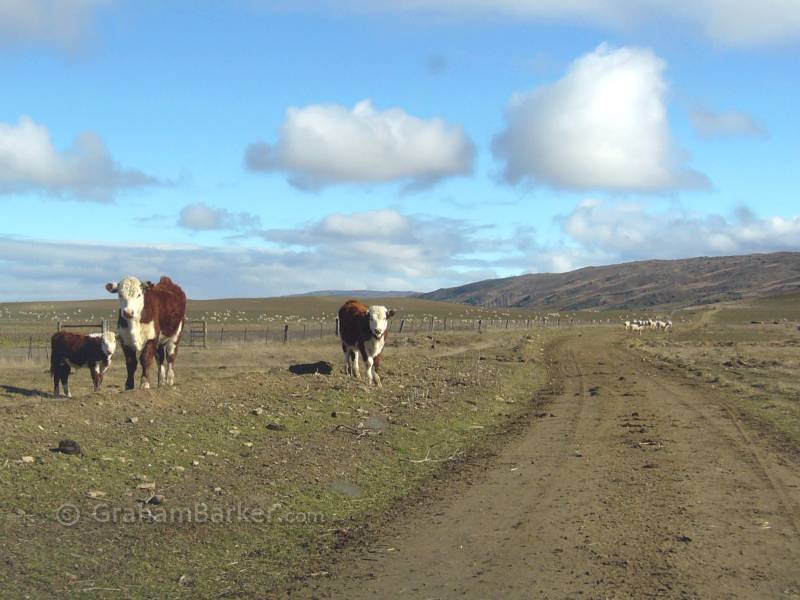 The Poolburn Gorge section of the trail can be approached from either side of the small Raggedy Range. The conventional way is from near the small town of Lauder, on the north west side: easier to get to, but a longer walk to reach the gorge section.

I chose the other approach - along the gravel Auripo Road on the south east side of the range between Poolburn and Oturehua. This gets you nearer, by car, to the gorge part of the walk, which is why I chose it. However it involves driving on surfaces which can get slippery after rain, as was the case when I visited. It also felt like I was driving through someone's farm with all the sheep and cows wandering over the narrow track, which added to the rustic charm of it all.

Anyway, I reached a spot where the rail trail could be accessed by a short climb up an embankment, and then I was off, cruising the rail trail. 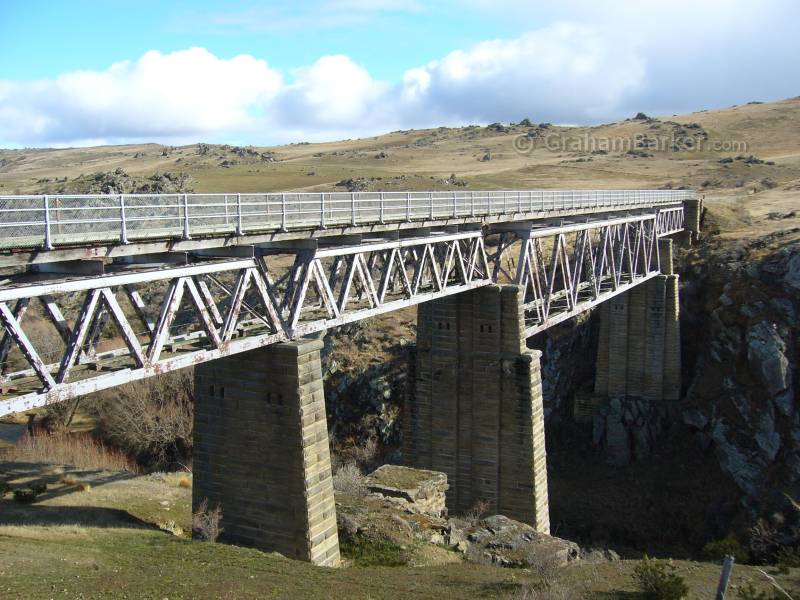 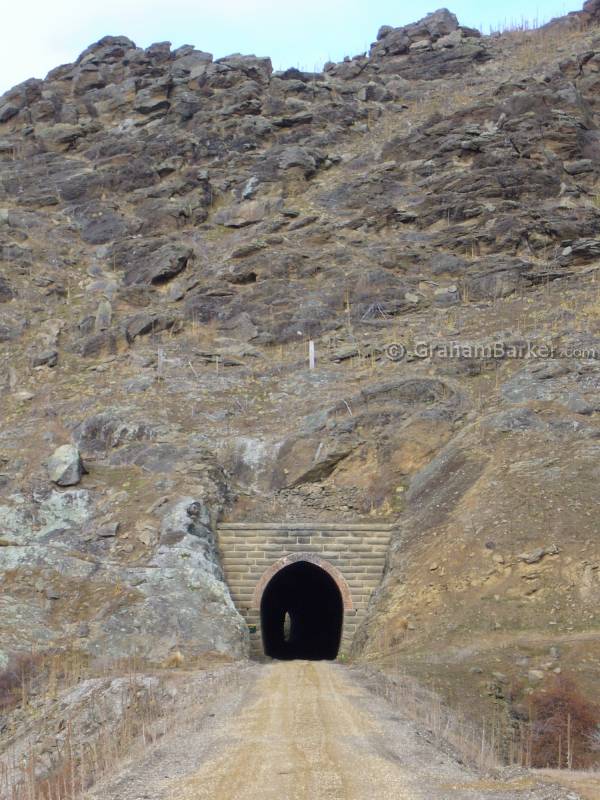 The rail trail entering a tunnel

Only a short distance into the walk was a massive steel bridge - the Poolburn viaduct, which features prominently in much of the promotional material about the trail. With solid metal beams and rock buttresses, it is an impressively sturdy structure.

Around the bend, the trail went into the first of the two tunnels in the area. By allowing time for my eyes to adjust, and walking carefully, I got by without a torch. Once you're far enough in to experience real darkness, the light from the other end is enough to give direction, even if you can't see exactly where you're putting your feet. However, I'd still recommend a torch. Not only is it safer, but seeing the tunnel walls somehow helps in appreciating the effort it took to build it in the days before tunnel boring machines.

Back outside, I continued on the rail trail following the path which the river has cut through the range. By New Zealand standards the Poolburn Gorge is not huge, but it is scenic and pleasant to walk through. The dry rockiness is typical of much of the Central Otago region, and has a character distinctly different from the rest of New Zealand. 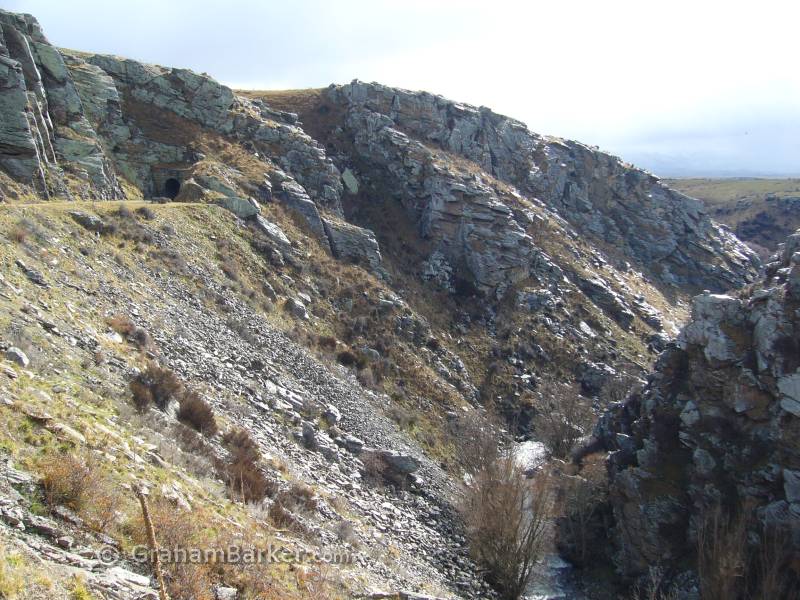 Views of the river below disappeared as I entered the second tunnel, which was similar in nature and length to the first. Beyond that, the trail reached the other side of the range and its gorge, then proceeded across flatter countryside towards Lauder.

Anyone organising a drop-off or a car shuttle could continue on to Lauder, making a one-way walk of about 10km. Or they could do what I did - turn around and go back to the starting point. I never mind retracing my steps; the view is a little different going the other way, and I tend to notice things I missed on the outward leg.

Like rail trails everywhere, the walking is easy on gentle gradients and a smooth surface wide enough to have once accommodated a railway track. In the warmer months it is popular with cyclists, but when I visited in the winter I didn't see anyone else. Not human, anyway. The only two other creatures I saw strolling on the track were the four-legged woolly variety - it seems you can't go far in New Zealand without seeing sheep! 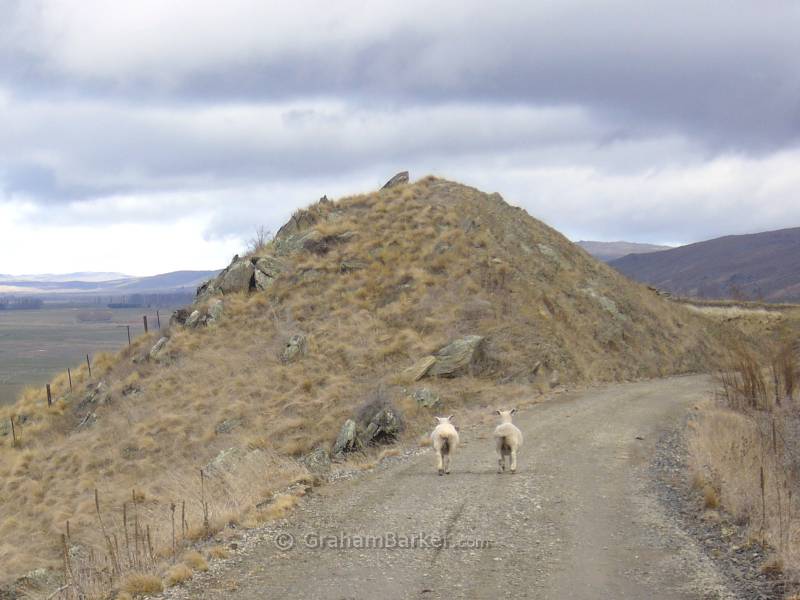 Other walkers on the trail