A range near Thredbo which becomes a frozen wonderland in winter

The Ramshead Range, close to Thredbo, is a great place to saunter among alpine wildflowers in summer tranquillity. In winter, however, it transforms into a frozen wonderland - wild and icy, yet very accessible to those on skis or snowshoes. 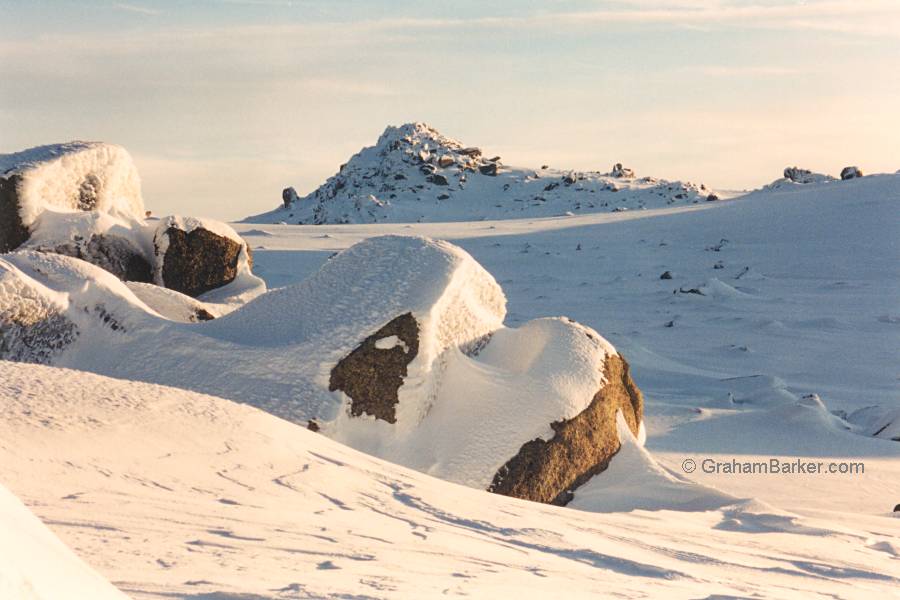 My first forays into the Ramsheads - named for the rocky ridges and crags scattered about the area - were in summer and spring. I had joined the crowds hiking from Thredbo to Mt Kosciuszko, and was lured away from the track onto the undulating alpine plateau with it's lofty views and carpets of flowers. I loved it, but wanted to see it in it's winter glory too.

I returned to Thredbo in winter for a ski holiday. From the top of Karel's t-bar, the highest ski lift in Australia, it is usually a straightforward matter to walk up the nearest high ridge and be on the edge of the Ramshead Range. This is what I did to gain my first views across the treeless heights of Australia's Snowy Mountains.

While ski boots are adequate for short distances if the snow is firm, to venture very far with safety and enjoyment requires skis or snowshoes. I joined a small group for a cross country ski tour across the Ramsheads, and was impressed. Despite being within a few kilometres of the Thredbo ski area boundary, it felt like we were in a remote wilderness. Rocks plastered with ice gave way to views of range upon range repeating into the hazy distance. Gentle hills which in summer held gurgling streams and bright flowers were smothered in mostly unblemished snow, much deeper than that in the ski resorts.

Fine weather quickly gave way to chilly wind and fog, in which it was hard to see anything, and my group carefully retreated. Being so easily accessible doesn't alter the fact that the Ramshead Range is very exposed, and potentially dangerous to anyone caught out unprepared in bad weather. 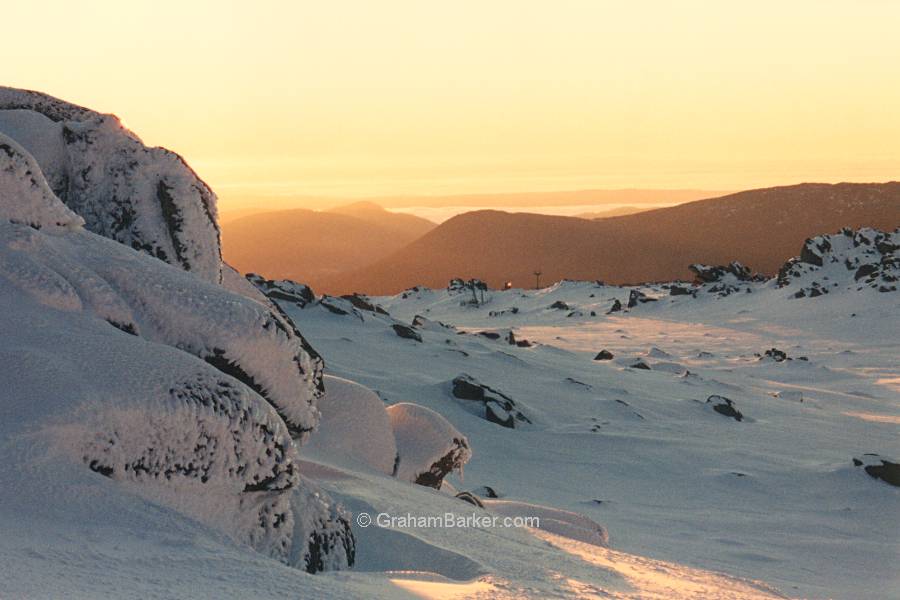 Sunrise from the Ramsheads, top of Karel's T-bar in centre

My next winter visit was with snowshoes rather than skis. I stayed in Thredbo at the youth hostel, and when the weather had improved enough, I took to the hills. Similarly to my summer hikes, I rode the chairlift and set off on foot beyond the highest ski lift, only this time my hiking boots had snowshoes attached. Also my backpack was heavier because of the extra cold weather gear I carried.

It didn't take long for all signs of civilisation to become hidden from view, and the wonderland of the Ramsheads in their winter glory was mine to explore at leisure. With all obstacles buried under a firm white surface, the walking was easier than in summer, and of course there were no flies.

Camping out was a joy. With deep snow, any spot other than on steep slopes can be made level, so I went for campsites with the best views. From my favourite site, I could see the sun setting over a large chunk of north east Victoria, and enjoy the sun rising over a large part of south east New South Wales. Such a site would have been very exposed in the event of a storm, but I kept a close watch on the weather so I could make a quick retreat when things got nasty, as they eventually did. 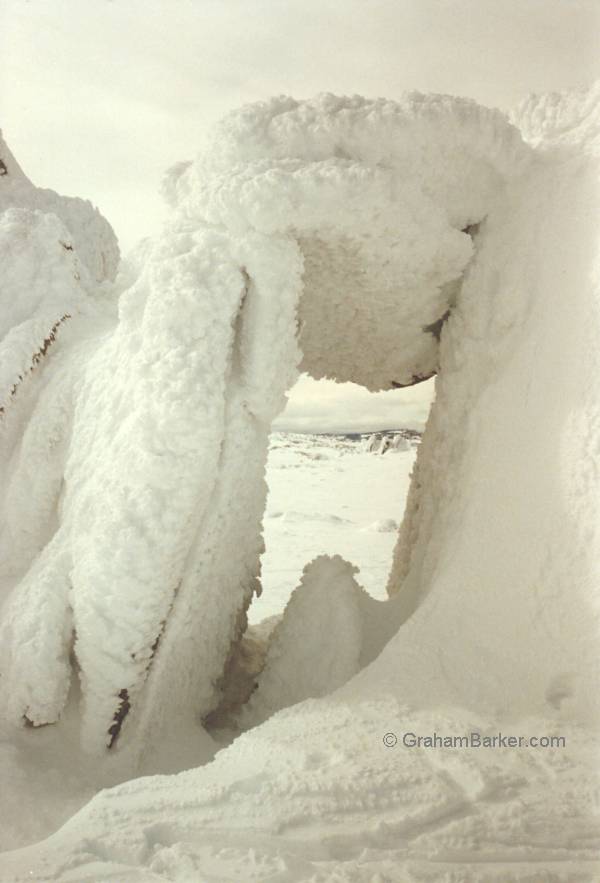 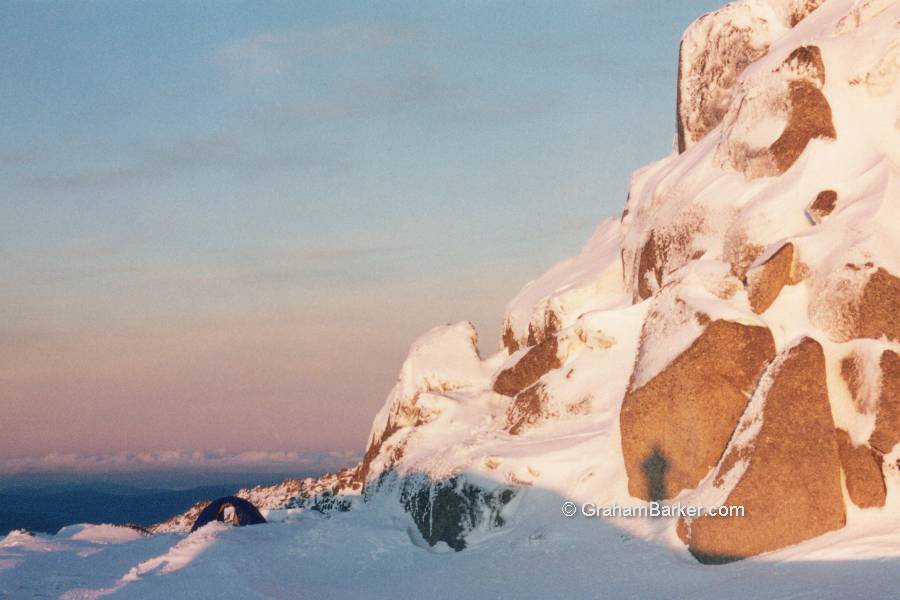 Being outside overnight allows a special appreciation of some of Australia's highest countryside. On a still night in the frozen Ramsheads, I experienced the most total silence of my life - so silent I could hear only my blood circulating. The stars were equal to the brightest I had ever seen them. It felt very wilderness-like and remote, despite knowing that the cafe at the top of Thredbo's chairlifts was just a few kilometres away over a couple of ridges.

It would be irresponsible of me to write about snow camping in the Ramshead Range without emphasising a few things. The area is high, subject to blizzards, and hypothermia is a real risk to anyone not well prepared. Being readily accessible to Thredbo (in fine weather) can give a false sense of security. In icy gale force winds with zero visibility, even a short journey back to the chairlift terminal could be difficult and dangerous. Any winter visit to the Ramsheads - even a day walk - should only be undertaken in good weather by well equipped parties.

And it gets cold. My first morning out was -12°C, colder than I had expected. It was then that I learned that butane gas doesn't vaporise well at temperatures below freezing, leaving me with a gas stove incapable of melting snow for drinking and cooking. At least it was a magnificent environment in which to learn such a lesson! 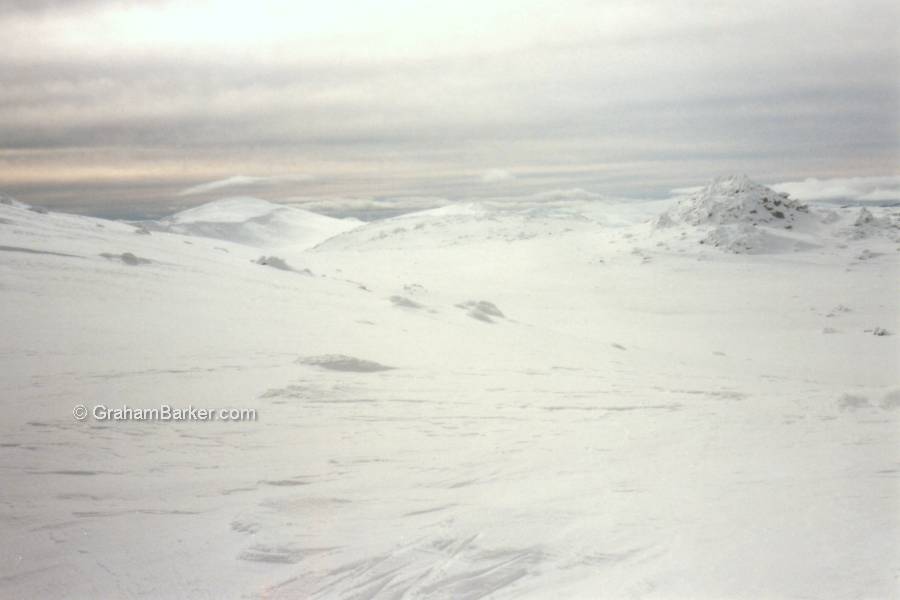