Tasmania's southwest wilderness is largely untouched by humans and accessible only to serious hikers. However two hydroelectric roads penetrate into parts of it, allowing anyone in a conventional vehicle to get a taste of this rugged wilderness. Panoramas of the jagged Arthur and Frankland Ranges, Mt Anne and Lake Pedder can be had simply by driving up this gravel road.

Although the flooding of Lake Pedder in the early 1970s was widely viewed as an environmental tragedy, it had a positive side. Travellers today get to drive on roads originally built to access dam construction sites, giving regular people limited access to some awesome scenery.

The road used to access Mt Field National Park and Russell Falls continues all the way to Strathgordon, deep in the southwest, and is sealed all the way. Branching off of this road is the gravel road I'm writing about here. It extends about 40km and leads to a dam built near Scotts Peak, hence the unimaginative but accurate name of Scotts Peak Dam Road.

If you've driven much in Tasmania you may have noticed that the gravel roads come in two main flavours. There are the hard stony surfaces, which may shake any loose bits off your vehicle but provide good grip in the wet. Then there are the smooth roads which provide a gentle ride, but whose surfaces turn to slippery mush after a bit of rain. Fortunately, given the area's remoteness, the road to Scotts Peak Dam is of the first type, a bit corrugated and pot-holed but reassuringly firm.

The turn-off is 29km past Maydena, and one of the first features is the Creepy Crawly Track. This is short loop walk through some attractive forest. The signage along the track is aimed at making the walk more appealing for children, but anyone who appreciates Tasmania's lush forests should enjoy it. In clear weather glimpses of distant Mt Field can be seen from the road in the vicinity of the track.

Further on, the road undulates, and alternates between dense forest, more open country and button grass plains. Soon Mt Anne comes into view - this is the highest peak in southwest Tasmania, usually snow-capped in winter and often in other seasons too. As the road progresses the view changes and reveals the other peaks of the Mt Anne massif - Mt Sarah Jane and Mt Eliza. In clear weather, and especially with snow, the views can be rather alluring. If you're driving, remember to watch the road!

The trailheads for the Mt Anne and Lake Judd tracks are passed, followed by glimpses of Lake Pedder. This is not the original Lake Pedder, but the massive 55km long flooded version which resulted from dam building. Even so, it can be very pleasing to the eye.

The first of two modest dams are passed, Edgar Dam, with a campground off to the left. Six kilometres further on the Huon campground turnoff is passed - and also the trailhead for intrepid hikers setting off into weeks of rain and mud. After the Scotts Peak Dam is passed, the road climbs to its terminus at the top of Scotts Peak. If the weather is clear, be prepared for some stunning panoramas.

The Arthur Range, viewed from the lookout at the end of the road

Scotts Peak sits at the south-eastern end of the present Lake Pedder in a commanding position. The Mt Anne massif can be seen in all its glory, along with the full extent of the Arthur Range - not very high, but carved by glaciers into probably the most jagged and spectacular range in Australia. No self-respecting Tasmanian wilderness calendar is complete without a shot from part of the Arthur Range.

In addition to these highlights, the view from Scotts Peak encompasses many scenic nooks and crannies of Lake Pedder lapping at the sides of numerous smaller ranges. Other than the small dams, and the road you came in on, there is nothing made or altered by humans in the entire vista. It's a view worth taking some time to soak in.

Mt Anne, from Scotts Peak Dam
Road. Clouds need not spoil the
views, as long as they are high.

From Scotts Peak it's a matter of turning around and going back the way you came ... unless you are staying in one of the campgrounds, which is desirable if you want to be around for sunrise or sunset. There are no facilities of any kind in the whole area apart from the campgrounds, and even they only have a couple of pit toilets and rainwater tanks.

My strongest advice for anyone wanting to taste Tasmania's southwest wilderness from the Scotts Peak Dam Road is to visit in good weather, if it is at all possible. The region is notorious for inclement weather, and while the drive would still be pleasant in rain, it is the distant views which make it really special. Clear skies, or high cloud without rain, are preferable.

Fortunately Scotts Peak is no more than a couple of hours drive from Hobart. If you can be flexible with your itinerary and are in Tasmania for a while, keep in touch with weather forecasts and be ready to dash south when the weather has a clear window. The effort of setting your agenda to suit the weather will be rewarded.

Lake Pedder and the Mt Anne massif, viewed from the lookout at the end of the road 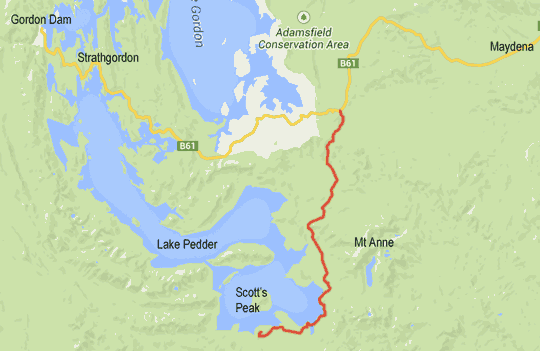 See footer for links to interactive maps
Short link for this page: rdu.pw/172