Cradle Mountain is one of Tasmania's most visited tourist attractions, and one well worth a visit ... even for those who prefer paths less travelled. One way to avoid crowds, and enjoy an experience most visitors miss, is to be there in winter during a snowstorm. Not after it has snowed, but while snow is falling. Here are some photos and video of one such visit to Cradle Mountain when it transformed briefly into a winter wonderland. 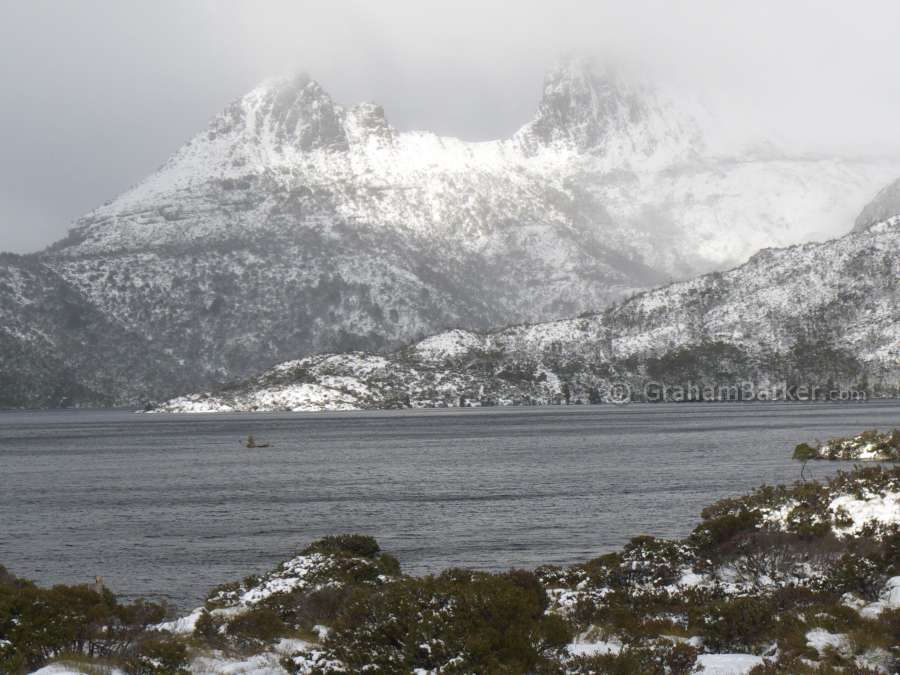 Cradle Mountain in a snowstorm

What makes such an experience special is that blankets of snow on the ground near Cradle Mountain are not all that common, contrary to what the postcards and glossy brochures suggest. Snow does fall often throughout the year, but it is only on the peaks where it hangs around ... and even there it can get patchy between snowfalls.

The storms bringing good snow down to the level of Dove Lake and the visitor facilities happen a few times each year, and tend not to linger long. If you want the full wintry wonderland experience with snow coating the bushes and all the surroundings - not just upon the peaks - you have to time it well. And be a little lucky.

My first few attempts were well timed but not lucky. The weather didn't quite live up to the forecasts, and snow only settled on the top of the higher peaks. Down on the walking tracks and in the campground it merely rained a lot. This has its own charm but wasn't what I had hoped for. However, these disappointments made success all the more satisfying. 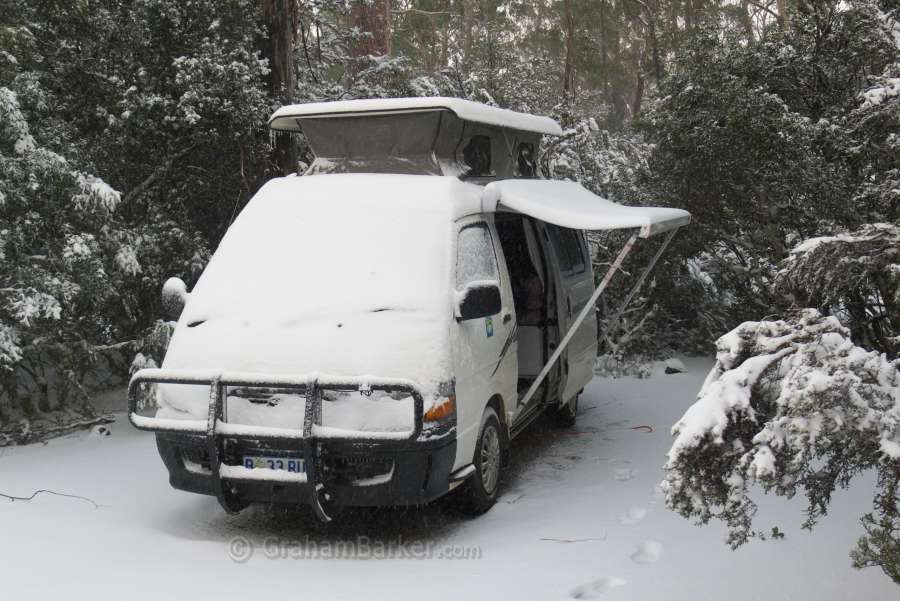 Then one winter, everything came together. The forecast was for Saturday night snow down to 500 metres (well below the altitude of lakes and campground), so I headed to the Cradle Mountain campground on the Friday night and parked my campervan in readiness. I planned to stay a few days ... in case the snow was late, and so I could wait for the roads to clear before driving anywhere else.

A brief snow shower fell as I set up the campervan, but it quickly reverted to rain. This was just a small promise of what was to come.

My first full day in the area had mixed weather. I went out hiking in rain which turned to sleet, then snow with icy winds, the hail, then back to rain again ... interspersed with mild sunny periods. Such are conditions in the north-westerlies ahead of a winter cold front - a mixed bag which can be tricky to dress for. 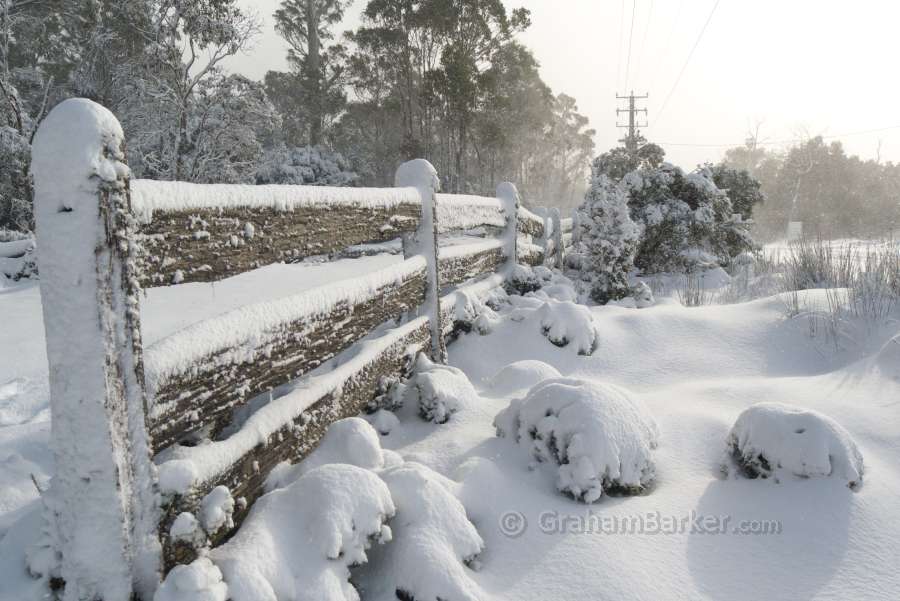 A strong cold front arrived that night and snow began settling on the ground. I woke the next morning to a beautiful white blanket, and to my delight the trees were thoroughly coated in it. Gusty winds had dispersed the icy particles among the foliage, rather than just settling on top.

Knowing how short-lived such conditions can be, I lost no time in going for a walk. Snow still fell - thickly at times - as I walked around the campground to the visitor centre across the road.

Few people were about, and for quite a while I enjoyed making the first footprints in the unblemished fresh snow. Outdoor tables at the visitor centre were buried under about 10cm of fluffy whiteness, showing how much had piled up in places sheltered from the wind. 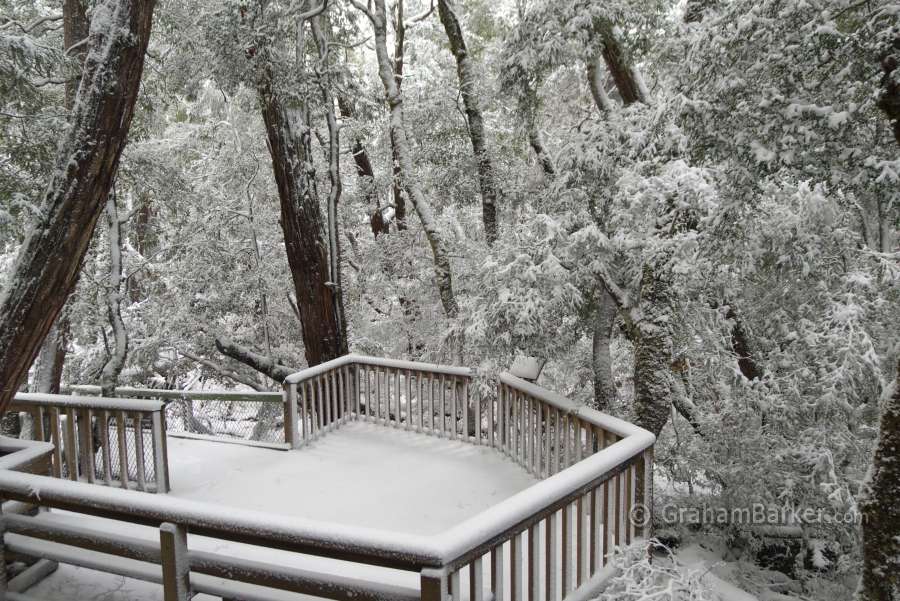 Rainforest walk, near the ranger station 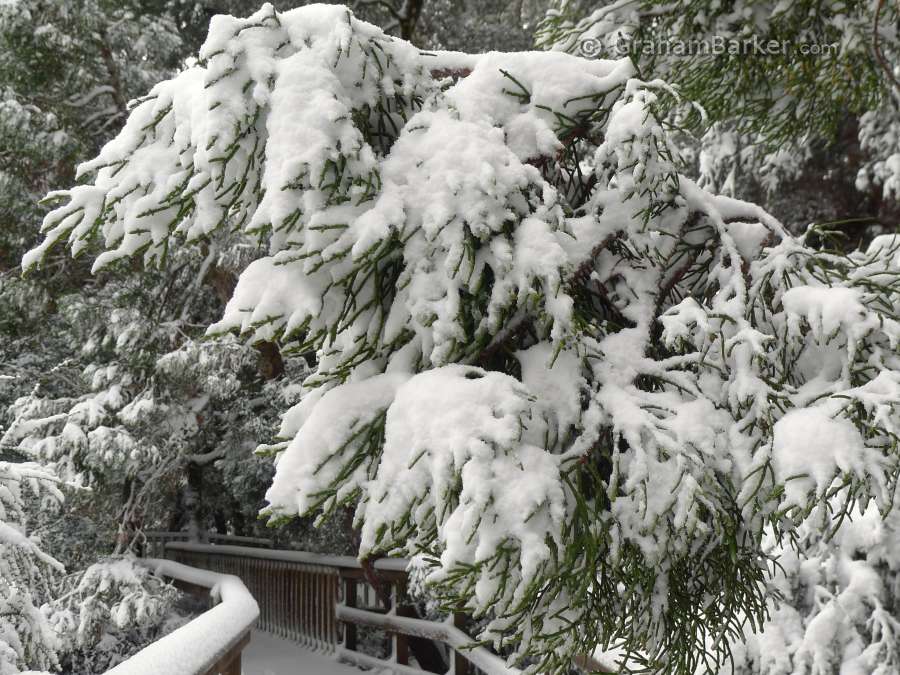 The regular shuttle buses were not running all the way to Dove Lake, as they usually do, because of the snow. Instead they could only go as far as the Ranger Station - so that is where I went. Several walk trails start there, and I began with the short Pencil Pine Falls and Rainforest Walk which takes in rainforest and a short but thunderous cascade.

It was glorious! Snow coating absolutely everything created wintry views seldom seen in Australia, and about as far removed as you can get from the stereotypical Aussie scenes of beaches and outback. It looked so pristine I would have felt awkward about spoiling it with my footprints ... had one other person not already done so.

After soaking up the snowy forest ambience, I returned to the visitor centre and joined a park tour. When snow restricts the road to Dove Lake to four-wheel-drive vehicles only, and you don't have one of your own (and don't fancy a long slippery walk), joining a park tour may be the only way to access the lake. It is from Dove Lake that the famous views of Cradle Mountain are seen. 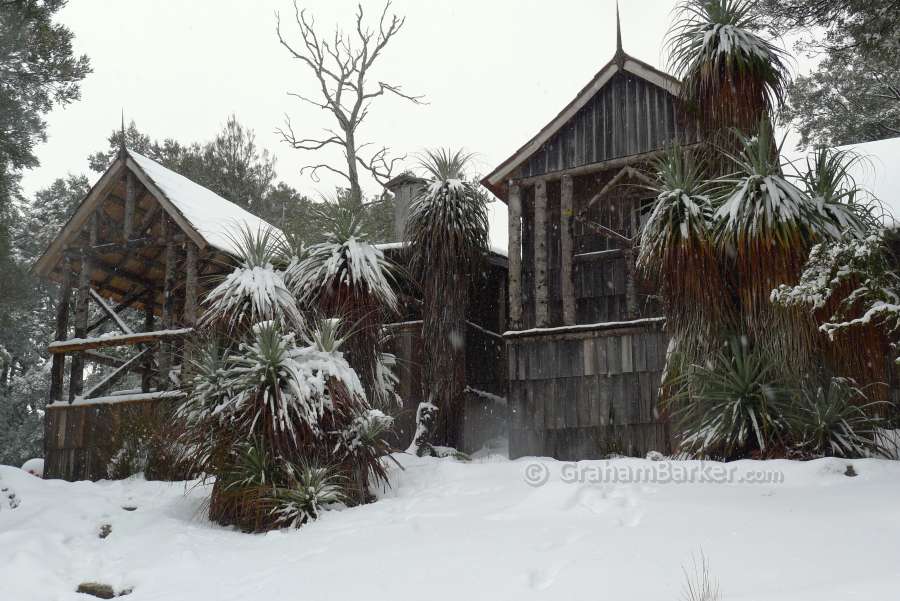 The four-wheel-drive mini bus tour was informative and something worth doing anyway, especially for first time visitors. Waldheim Chalet looked charming in new snow. Eventually we reached Dove Lake and were greeted with a splendid vista of Cradle Mountain smothered in fresh snow - right down to the lake.

At last! After many attempts, I had finally managed to get the timing right and see this classic Tasmanian scene in it's winter glory, with lingering snowflakes and threatening cloud. However, I noticed that the snow near the lake already showed the beginnings of turning to slush ... a reminder of how fleeting these true winter glimpses can be.

While far from a typically Aussie scene, there was no doubt which country I was in. A wombat could be seen huddling in the snow, and I found a wallaby nibbling the snow-covered native bushes. Overhead, currawongs flew among the snow flurries. One of these large black Australian birds swooped and plucked the cheese right out of a sandwich I was eating, and had gone before I had time to react. The loss of my cheese was annoying, but I couldn't help being impressed. 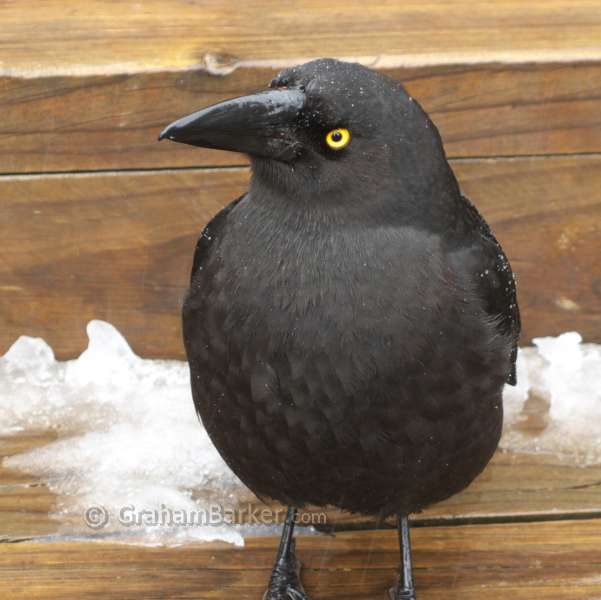 Don't be fooled by this currawong's innocent face - he wants your lunch! 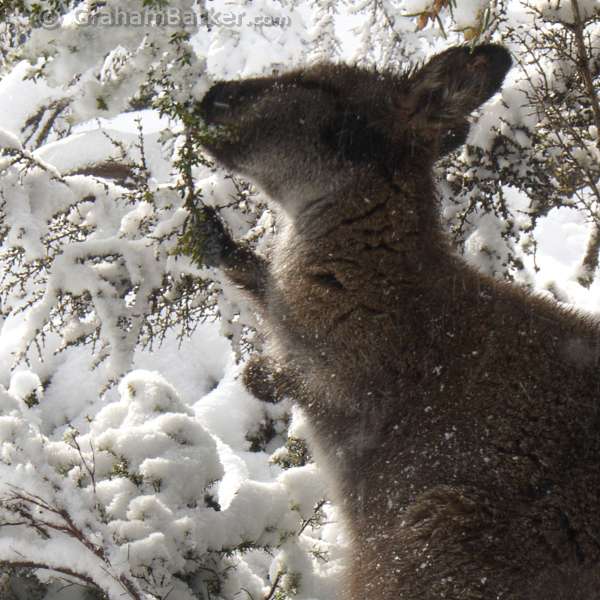 A wallaby, to remind that this is Australia

Later on, I returned to the Ranger Station and walked the forest track past Knyvet Falls. By now it was early afternoon; still plenty of snow around, but no longer clinging to the trees. In just a few hours the thaw had set in. Nevertheless, wandering through Tasmanian native rainforest with snow was a unique and beautiful experience.

Next day the roads were clear and open. As I drove away, I passed much traffic heading up to Cradle Mountain to see the snow. I couldn't help feeling gratitude - and perhaps a tinge of smugness - that I'd been able to see the wintry outbreak at its best.

Being around Cradle Mountain during a snowstorm can take a bit of planning and flexibility, and a huge amount of luck with the weather. But if you ever have the opportunity, I can thoroughly recommend the experience.

This video captures a snowfall in the Cradle Mountain National Park - beginning from the campground and visitor centre, then to a rainforest walk, the Pencil Pine Falls, and ending up with views of Cradle Mountain from Dove Lake.