I love experiencing snow, especially in places which don't normally get any. One place I never expected to see the white stuff was on the west coast of New Zealand's South Island. Even during big freezes when Canterbury and Southland are blanketed, the west coast - near sea level - normally stays mild and snow-free. Except when I decided to drive there. 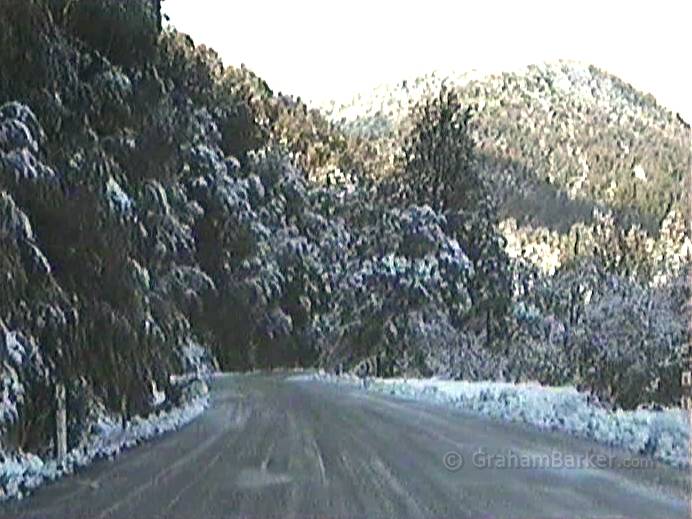 Between Franz Josef and Fox

The irony is that when I hired a car in Christchurch, I headed first around the north end towards the west coast specifically to avoid snow. The roads inland and south were affected by snow and ice, whereas it almost never snows on the west coast. I'd be safe there, I thought.

I believed this because I had researched the winter climate of New Zealand. Snow settling on the ground at or near sea level happens maybe a couple of times per year but only in the far south, and in the east below Christchurch. Dominated by moist and mild onshore winds, the west coast is very wet but almost never sees snow descending to low levels. Almost. 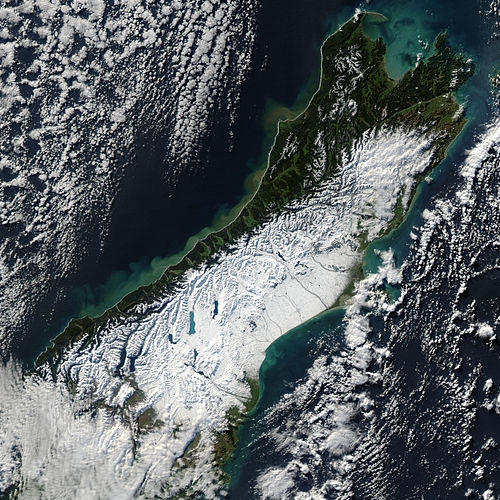 Satellite view of an extensive snowfall in June 2006 which reached sea level in Canterbury and Otago. Even in such an unusually snowy event, the west coast is noticeably snow-free. Source: NASA

The first sign of anything unusual was when driving towards the coast down the Buller Gorge. Snow had blanketed the roads that morning in St Arnaud, but that was nothing out of the ordinary for a good winter cold front considering the town's altitude. Snow on the roads melted by the afternoon, and I was off.

But as I descended through the rainforests following the Buller River down it's luscious gorge, the snow lining the road and shrouding the trees just went on and on. It wasn't until reaching almost the bottom of the descent that the snow-covered bush was left behind. Clearly that morning's snow had settled to a much lower altitude than normal. 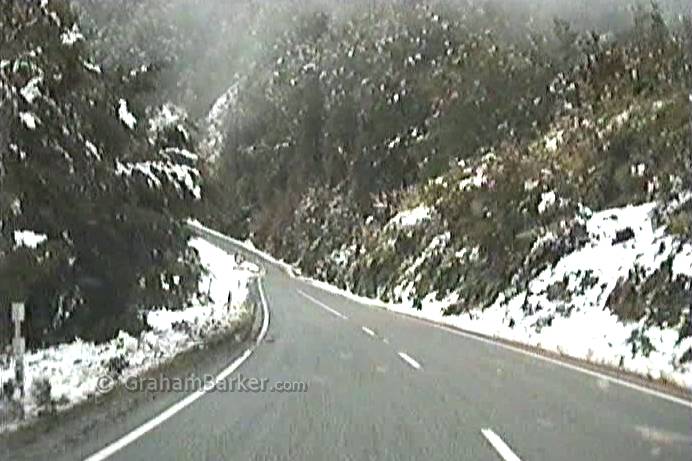 Snow in the Buller Gorge

Down at sea level there was no sign of snow. Normality ... until a couple of days later in normally snow-free Franz Josef village when I woke to a thin layer of white everywhere. And large snowflakes falling, persistently. I rushed outside with a camera, thinking it couldn't possibly last, but it did.

I walked to the snout of the Franz Josef Glacier, enjoying the unexpected novelty of walking on snow. Usually the river of ice looks out of place intruding into low-altitude temperate rainforest, and it is this incongruity which makes it distinctive and puts it on the visitor's must-see list. Today, however, it looked entirely at home in the snow-dusted surroundings. For this glacier it was weird. 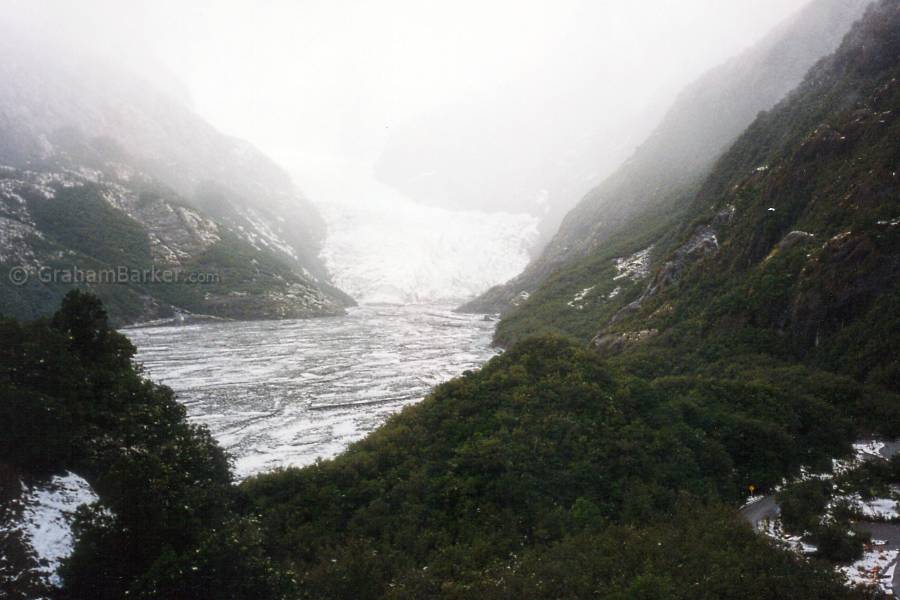 Snout of the Franz Josef Glacier 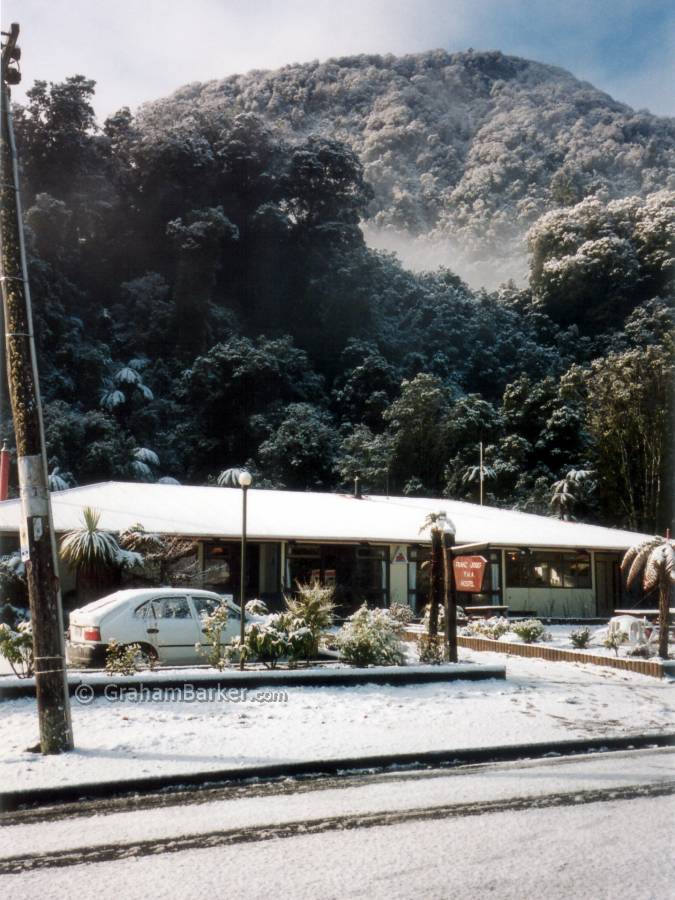 The snow eased up later in the morning and I expected it to mostly melt in the afternoon. Trees and bushes lost most of their snow, but plenty remained elsewhere. Next morning there was still a fair amount left in shaded locations, but the roads were drivable and so I continued south.

It soon became clear that this was not a localised event. I drove on and on, but the snow was everywhere, all the way to Haast which was as far as I got. Not Haast Pass, which has some altitude, but the town of Haast which is almost on the beach. 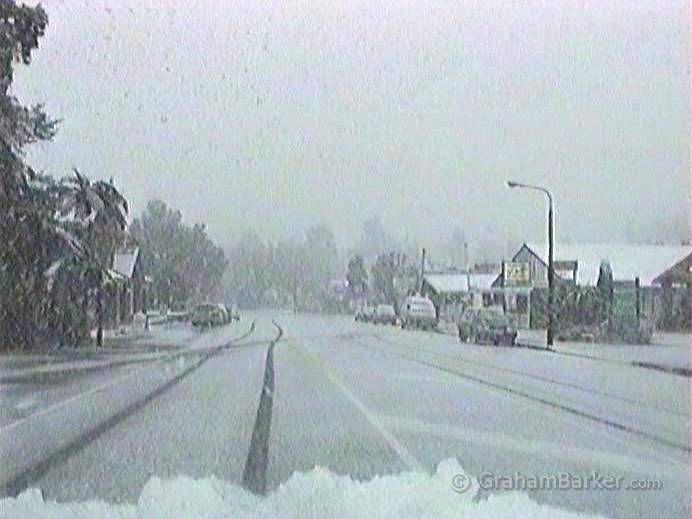 I grabbed some video shots while driving when the road was mostly clear or only thinly slushy. There were sections where the snow on the road was thicker and more scenic, but the need to keep both hands on the wheel precluded using my old brick-sized analogue video camera. Oh for the tiny dash-mounted cameras of today!

Then came another irony - snow chains. I've managed to drive on light snow in many mountainous places in Australia and New Zealand without needing to fit snow chains to the tyres for traction. The only time I've ever felt the need to fit chains was here, on the west coast of New Zealand, on the main highway within sight of the sea. Where it almost never snows.

A manager at the youth hostel in Franz Josef said it was the first snow he'd seen there in seven years. Newspapers reported that some places on the coast had seen their first snow in thirty years. So while it's not unprecedented, it is rather unusual, which is why I thought it would be a safe place to drive in order to avoid snow on the road.

In travel, I enjoy the buzz of occasionally seeing things most others don't get to see. One way is to go to less-visited places; another is to see familiar places in unusual conditions, like this. Almost everyone touring New Zealand visits the South Island's west coast, but very few get to see the low-lying rainforests and the coast itself draped in fresh snow. For that rare privilege I am very grateful. 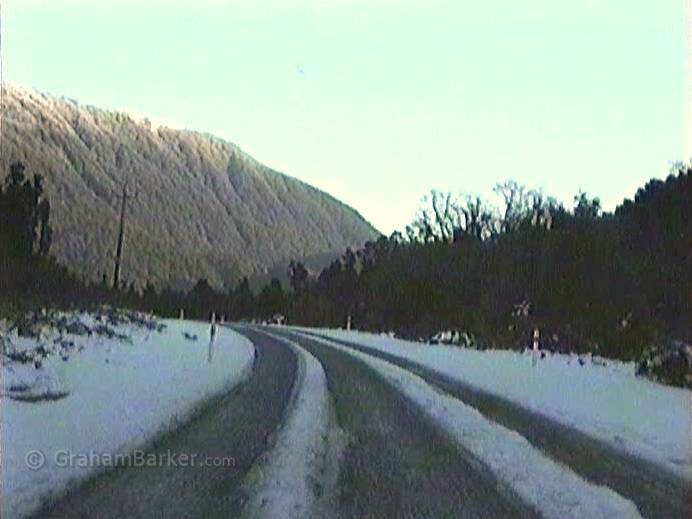 The snow goes on - near Lake Moeraki

This video captures the very rare sight of snow on the west coast of New Zealand's south island. Includes driving down a snowy Buller Gorge, snow falling in Franz Josef town and the nearby glacier, and snow-affected roads further south. Also some audio snippets of news and road reports - they were playing on the car radio when I recorded some of the footage.
Music: "Hiding Regret" by Mark Petrie