Have you ever found an unspoiled beauty spot so special you want to keep quiet about it - so that it remains unspoiled - but because it's so lovely, you want to tell others so they may enjoy it too? I sometimes feel that dilemma: to share a favourite place on this website, or to leave it out? Here are my thoughts on when to publicise or keep it under my hat. 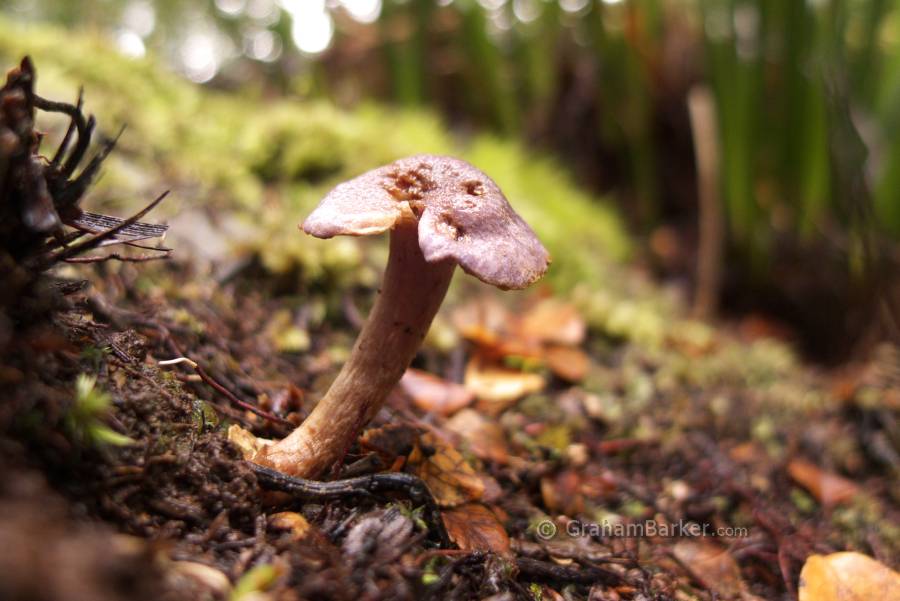 Somewhere in the Tarkine rainforest, an at-risk part of Tasmania

It’s a dilemma especially pertinent to the Internet age. In the past your words may have reached only those you spoke to directly. Nowadays we can write about somewhere on a blog, website or social media and have a far greater audience. With fewer and fewer quiet places slipping under the radar, it is even more important to guard the obscurity of those which remain.

On the other hand, almost nowhere is truly secret or undiscovered any more, so is it too late to even be worrying about spreading the word?

When I'm debating whether to write about a special place on this website, I ask myself these questions.

What information is already "out there", and how accessible or well promoted is it?

A quick Internet search gives an idea of how much has already been published online about a place. But don't forget other sources like travel books and the tourist literature found in accommodation and visitor centres. I also consider how "discoverable" any information is - do you need to specifically search for it, or is a casual reader likely to just come across it without searching?

Take Misery Beach, for example - a beautiful quiet beach near Albany in Western Australia. When I first found it by accident in the 1980s it was not signposted, and I couldn't find anything written about it. Two locals on the beach told me the signposting was often removed to deter visitors. To preserve the obscurity I enjoyed the beach but didn't tell others.

Twenty years later the beach is well signposted. It's in the tourist brochures, referred to online, gets a mention in the Lonely Planet guide, and is clearly marked on the maps given to visitors. Word is clearly out now, so when I began this website I felt no hesitation in writing about it.

In other words, if a place is already common knowledge - and especially if it is already being promoted to visitors - there may be no point in keeping quiet about it. 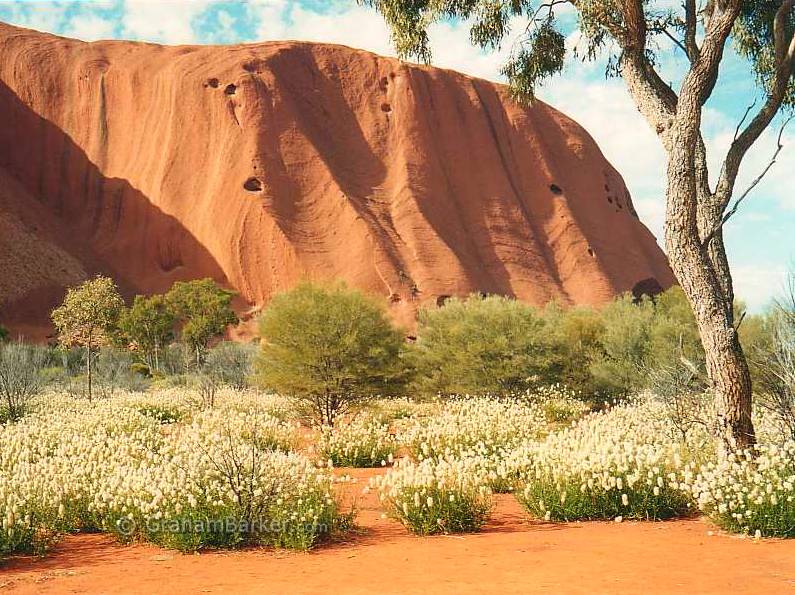 Too late - the word is out. Everyone knows about this big rock in central Australia

What do the locals think about more visitors?

If publicising a "hidden gem" could contribute even slightly to more people visiting, then the views of the locals should also be considered. Do the people who live in the area want the business opportunities that more tourists can bring? Or do they like things just as they are, and prefer the crowds to stay away?

I explored this question with some of the residents of Flinders Island. The island has a special charm that I would hate to see spoiled by over-development, yet I liked it so much I wanted to encourage like-minded travellers to visit. What did the locals think?

It was by no means a thorough survey, but the impression I got from those I talked to was that they would like to see more visitors, up to a point. Many of those living on the island depend on tourism for all or some of their income, or benefit from the economic wellbeing of other islanders who do. Visitor numbers have sustained an increase in the frequency of flights to the island, which benefits the community in general.

The locals are well aware of how special their home is, and would resist excessive change. Therefore when I returned home I felt no hesitation in writing about Flinders Island here.

Anyway, there are other factors limiting the flow of visitors to the island, which relates to another question I ask ... 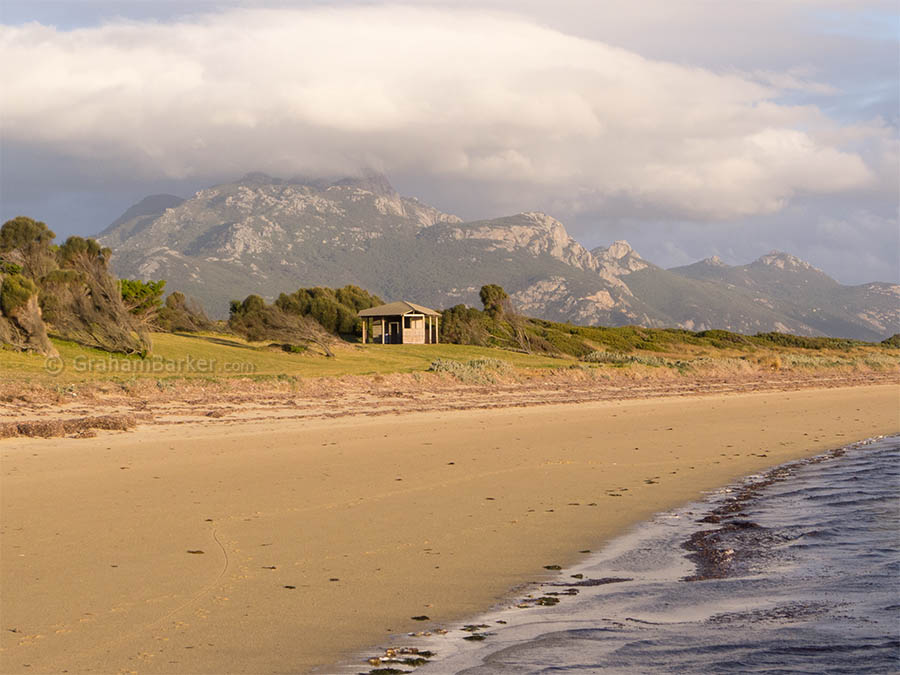 How realistic is an increase in visitors, even with publicity?

Just because a treasured beauty spot becomes more widely known, it doesn't necessarily follow that visitor numbers will increase greatly. There might be barriers to tourism such as the difficulty or cost of getting there, a lack of other nearby attractions to justify the effort, or natural filters such as limited access.

In the example of Flinders Island, the small number of aircraft seats flying there put a cap on the visitor numbers. Even if that we're to change, the cost of getting there, living there, and the relative lack of attractions and facilities geared to mass tourism mean it will probably never get too crowded ... even with much more publicity.

Publicising hidden places which are easily accessed and close to well-trodden tourist trails could put its "hiddenness" at risk. But if other factors are keeping the crowds away, then telling others is less of an issue. 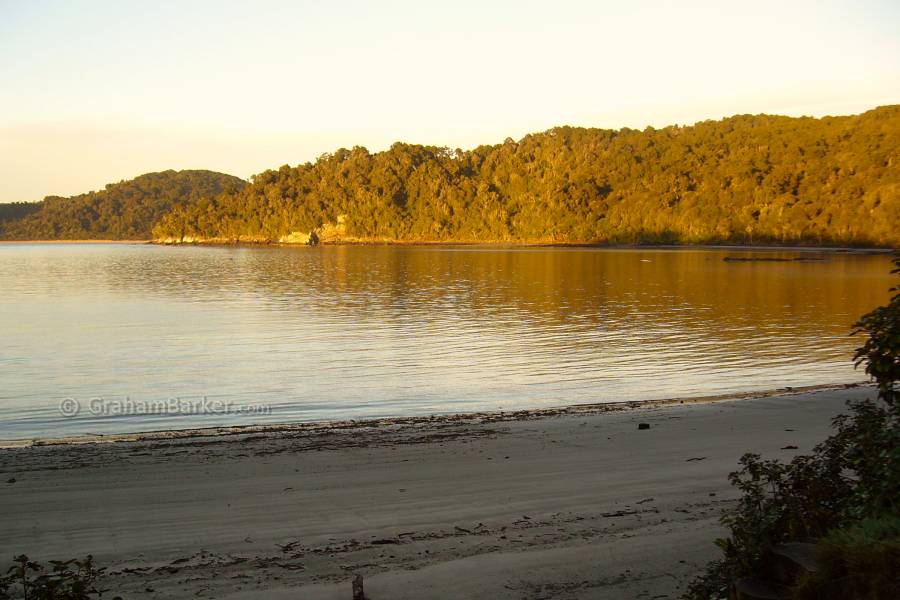 Magnetic Beach, Stewart Island, NZ. Remoteness and the effort of getting here keep the crowds away

Is the place environmentally fragile or culturally sensitive?

Some of my favourite places to visit are out in the natural world ... beaches, waterfalls, lakes, forests, mountains. If there is a well formed trail and some basic facilities such as a parking area or toilets, and a few more visitors are unlikely to have any impact, there may be no reason to not tell others about it.

On the other hand, I may keep quiet if a place could be harmed by an increase in footprints. This might include delicate off-track alpine areas, or out of the way spots where nesting areas or rare plants might easily be trampled to death. Such places are probably not secret (if they were, I wouldn't have found them), but I would avoid promoting them as a matter of principle.

Similarly, if I stumbled across a place of special cultural significance which wasn't advertised or signposted, I might keep it to myself. An example might be a rock art or cave painting site which is important to Aboriginal people for cultural or spiritual reasons. I've not yet come across such a place which wasn't already public knowledge, but it's something I would consider if I did.

What effect could my sharing of this place possibly have?

The other thing I consider is whether my words about a place will actually make any difference in the big picture. Would it actually lead to someone visiting a place which they might not have visited had they not read about it from me? Will what I write even be read by many people at all?

This is where platform, audience and subject come into play. An article in a newspaper, magazine, or travel guide could reach a large audience and play a role in making a place more popular. Especially if that place has broad general appeal. In these situations the question of whether an obscure place should be thrust into the limelight carries more importance.

On the other hand, writing about quiet places or off-season travel on a niche website like mine will reach a much smaller audience and have less effect on visitor numbers, if any. My writings will probably only be found by people searching for the sort of places I write about ... and if they are searching, they'll find these places written about elsewhere too. And in their travels they might find these places for themselves anyway. As I did. 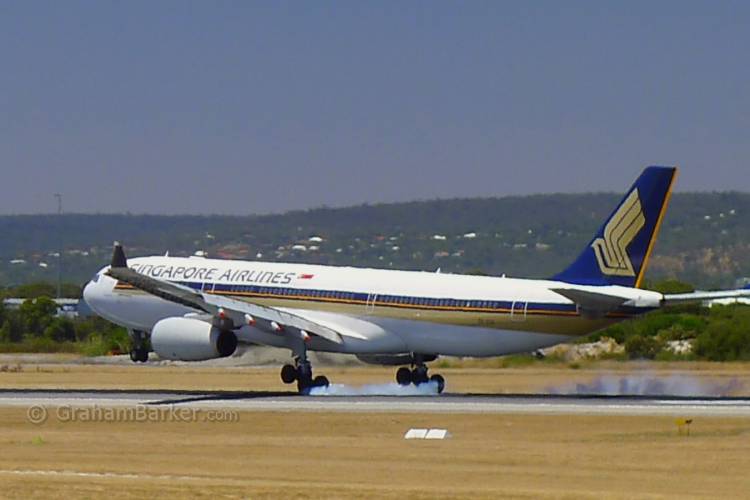 That's what I chew over if I find an unspoiled beauty spot that I'm hesitant to publicise. In reality it is rarely an issue. Phrases like "best kept secret" and "places only the locals know about" are just marketing propaganda of the tourism industry: few places are truly secret or hidden any more.

There could of course be a few special places which I prefer to leave other people to find for themselves, as I did ... but I wouldn't be mentioning them here, would I? 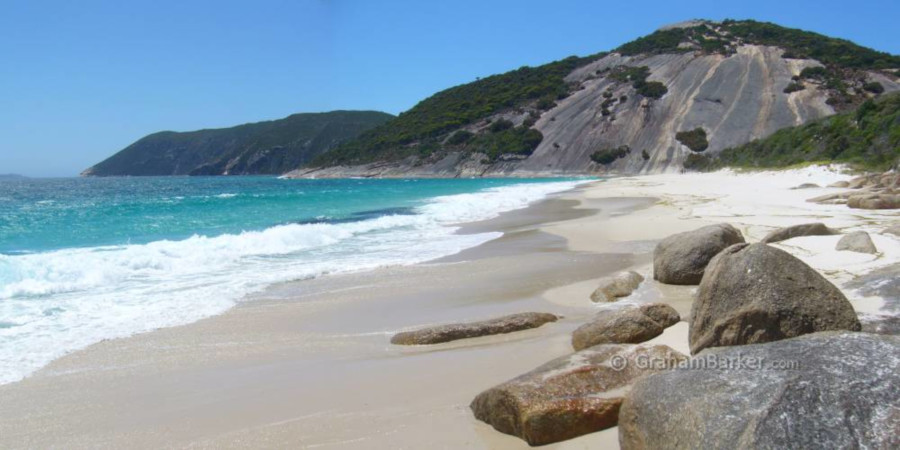