If you have your own transport and the time to go wandering, you can end up spending time in some delightful places that might not have been chosen if planning a short trip. For me, one such place is St Arnaud, a tiny town in New Zealand's south island. It sits quietly beside a lake in the Nelson Lakes National Park in the central part of the island's north end, far enough from the popular touring routes to escape the notice of most international tourists.

The charm of the area hasn't escaped everyone's notice, however. St Arnaud may only have around 100 residents, but it has about 400 holiday homes, so the Kiwis clearly like coming here. Between Christmas and new year the place can be packed out. But if you visit outside of local holiday seasons you are unlikely to be bothered by crowds.

I dropped into St Arnaud one winter and it felt at times like I had the town mostly to myself. It was skiing which drew me; St Arnaud is the only town in the vicinity of the nearby Rainbow Valley ski area. Over a ten day period I enjoyed some gloriously uncrowded skiing at Rainbow, with the rest days and bad weather days spent exploring the lakeside beech forests. Good skiing, pleasant forest walking and friendly locals in a patch of unspoiled beauty far from the crowds - I couldn't have asked for more.

The only possible downside is a small range of accommodation, and limited shopping if you are self-catering. The post office, small general store, video rental and takeaway outlet are all part of the local petrol station, and that's it as far as shops go. Anything you need is best brought with you from elsewhere - and elsewhere is not close. The nearest towns to St Arnaud are Blenheim (100km northeast, near the east coast), Nelson (100km away on the north coast) and Westport (159km away on the west coast). The nearest tourist and bus route is State Hwy 6, which passes 25km away at its closest point.

This relative isolation (by NZ standards) and lack of through traffic affects the feel of the place. I had been skiing at Mt Hutt among vast throngs of people, a large portion of them from overseas. In contrast, crowds at Rainbow Valley measured in the dozens, and none I spoke to were from further afield than Blenheim, Nelson, and Westport. St Arnaud itself was the same - a very local flavour.

A frozen lake near a walk trail

St Arnaud has a Dept of Conservation information centre, a good place to check out before going on a walk. Easiest is the Bellbird walk, a ten minute loop track through beech forest near Kerr Bay, where bellbirds, fantails and tui can usually be heard. This walk extends into the Honeydew walk, a forty minute loop featuring the poo of scale insects which goes by the more palatable name of honeydew. Look for the clear droplets on the sides of the trees - it does taste a bit like honey if you can forget it came out of an insect's bottom.

Other short walks are available, and longer ones too, such as the 10km Whiski Falls track or the 9km Mount Roberts Circuit. The major walk in the area is the Traver-Sabine Circuit, 80km of serious walking into the alpine regions south of Lake Rotoiti.

I did most of these walks, and thoroughly enjoyed the dense, damp and dark beech and podocarp forest. While I didn't walk the 80km Circuit, it begins with a long walk through the forest along the east side of Lake Rotoiti, and you don't need to walk the whole circuit to enjoy the lakeside section. That's what I did one inclement day - just set off along the path, and turned back when I needed to.

Snow on a forest track

Another option would have been to take a water taxi to the other end of Lake Rotoiti. Some do this to get a head start on a long alpine trek, but the scenic boat ride could also serve as the outward leg of a day walk, returning to St Arnaud through the forest beside the lake.

When I was there, I stayed in what was then known as the Yellow House. It has since been redecorated in a less vibrant colour and is now the Travers-Sabine Lodge, a hostel with a variety of rooms. The owners also run a collection of self contained log chalets, as well as a hot tub available to all guests for a small fee. I have pleasant memories of soaking in the warm bubbles while watching the fading dusk glow colouring the snow on the surrounding mountains. Nice.

Otherwise there is the Alpine Lodge and Chalet, with its hotel and budget rooms, or else two campgrounds. I walked through the campground beside Kerr Bay, crunching the ice in the frozen puddles and feeling the cold wind penetrating my layers, thinking what a beautiful place it would be to park a campervan. You'd just need to be prepared for chilly conditions in winter.

Not a common sight: snow covering
the town centre of St Arnaud

Leaving St Arnaud wasn't easy; I had slipped rather comfortably into the relaxed pace of the place. When I eventually decided to drag myself away, a snowfall blocked the roads, giving me an excuse to linger and see the forest and lakeshore quietly coated in white. While occasional snow is not unusual in winter, it doesn't usually last long, and the town and surrounds are mostly snow free.

The snow which covered the roads in the morning had melted enough by mid afternoon for me to safely drive away. But as I did, I hoped that some day I might return to this quiet lakeside village which too many visitors to New Zealand miss out on.

Video of a forest walk

This video is from a stroll through some of the beech forest surrounding St Arnaud. Music: Studio Per 'a Cirimonia - Tema 2 by Francesco Di Fiore 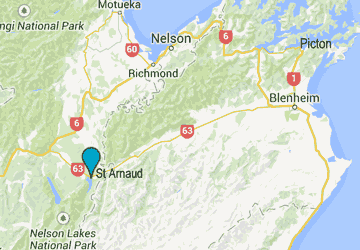 See footer for links to interactive maps
Short link for this page: rdu.pw/176