Skiers or snowboarders familiar with Australian snow would know just how short the ski seasons can be in this sunburnt land. Australia is the only continent without permanent snow, and once the ski areas have closed in early spring, the idea of skiing in late spring or summer seems absurd. But it can be possible ... if you know where to go, don't mind hiking with your skis, and can accept the limitations of skiing on snow patches. 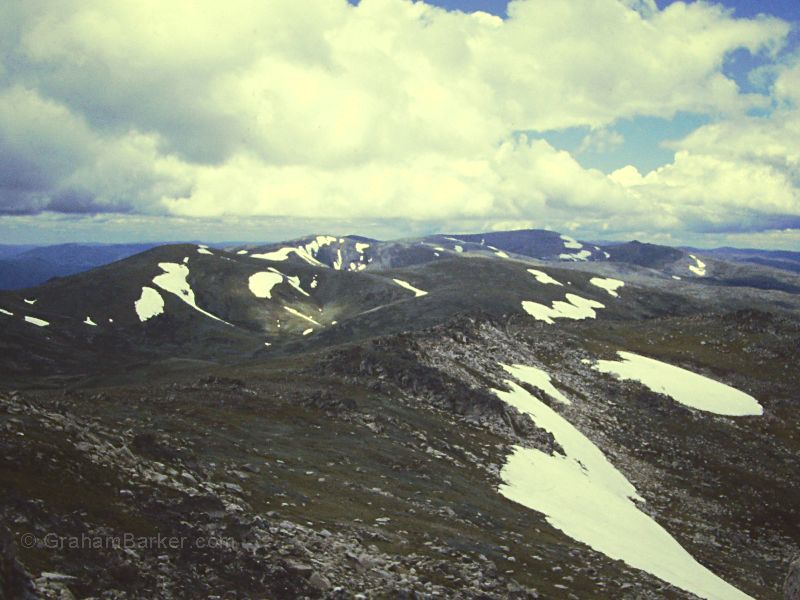 I first dreamed of summer skiing while hiking in the Snowy Mountains of New South Wales. Over several summers, I noticed some of the scattered snow patches left over from winter seemed to linger a long time. On the higher ranges - accessible from Thredbo or Charlotte Pass - the winter snow piles up in places sheltered from the prevailing winds, and isolated patches can persist long after the bulk of the snow has melted.

The amount of lingering snow varies a lot; depending upon the winter snowfall and how much rain there has been to wash it away. There is almost always some snow lasting into January to varying degrees. Some of these remnant drifts can be large enough and extend far enough down a hillside to make them potentially skiable. Imagining myself zooming down summer snow on skis while the rest of the country baked was a novelty I just had to experience.

Several years later I returned in late November to early December - late spring bordering on summer, and long after the ski season had finished. I stayed in Thredbo and caught the year-round chairlift to the edge of the Ramshead Range. Like everyone else I set off hiking across the grassy alpine meadows, but unlike the others I was also carrying a pair of ski boots in my backpack and a pair of skis hanging from my shoulder. It felt odd, but in a good way. 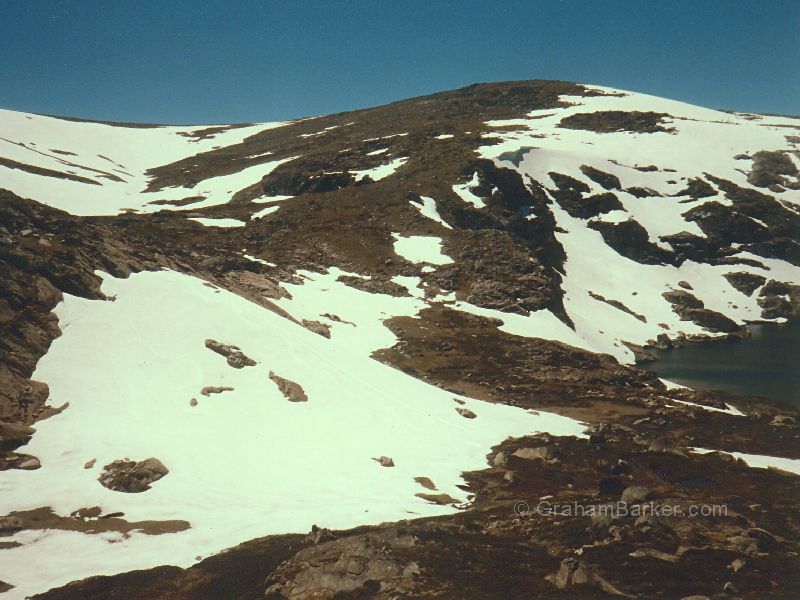 One drawback of the out-of-season skiing idea is that you need your own gear. Rental shops have closed for the season, and even if they hadn't, they wouldn't risk letting their gear be used in such a way. Skis and rocks don't go well together - summer snow patches often have rocks poking through, and rocks at the bottom where the snow suddenly runs out.

For this excursion I stopped at a second hand ski shop in Melbourne on the way, and bought some crappy but very cheap old skis. They already had lots of scratches, so a few more wouldn't matter. In hindsight, this precaution probably wasn't absolutely necessary - major scratches and damage to a good pair of skis could have been avoided by being careful.

I followed the popular path from Thredbo towards Mt Kosciuszko, a convenient route to the longest lasting snow patches. It had been a good snow year and plenty of remnants clung to the sheltered sides of the Ramshead Range, so I was in luck. Just a few kilometres of walking plus a short excursion away from the path brought me to a large unbroken patch of snow - perfect! 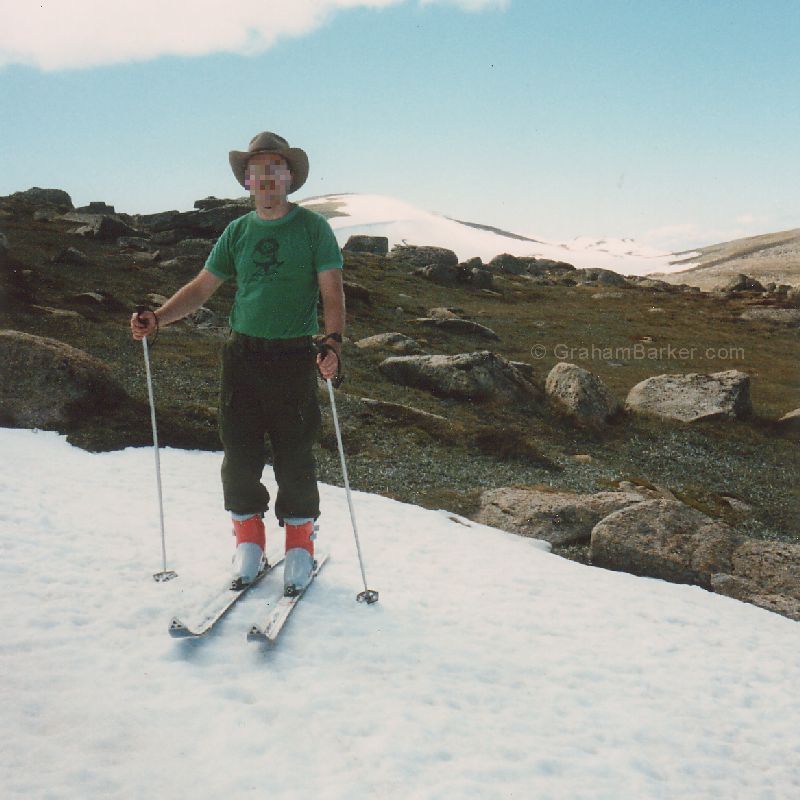 On a Ramshead Range snow patch. Note the rocks nearby.

One of the downsides of backcountry skiing at any time of year is that to go down, you must first climb up - on foot. This can turn a few ski runs into a strenuous and sweaty day out. Another way to see it is as an opportunity for healthy exercise in the fresh air, with skiing as a bonus. I tried to think of it that way, but it is still a lot of work.

The skiing turned out to be slower and easier than I expected thanks to the mild conditions. Ski resorts often use the term "spring skiing conditions" to describe snow which is rock-hard ice in the mornings, softening to damp slush in the afternoons. This is mostly what you get on spring and summer snow patches in Australia, except that any overnight freezing tends to thaw earlier in the day. By the time you've hiked to a snow patch, the snow should be soft and forgiving.

I had great fun zooming down the melting snow drifts despite the dampness, the short distances, and the need to climb back up after each run. As days passed I tried steeper snow drifts, and ventured further from Thredbo. Tired of carrying heavy gear back and forth, I hid my skis and boots in a deep crevice in an isolated pile of rocks and retrieved them each day. 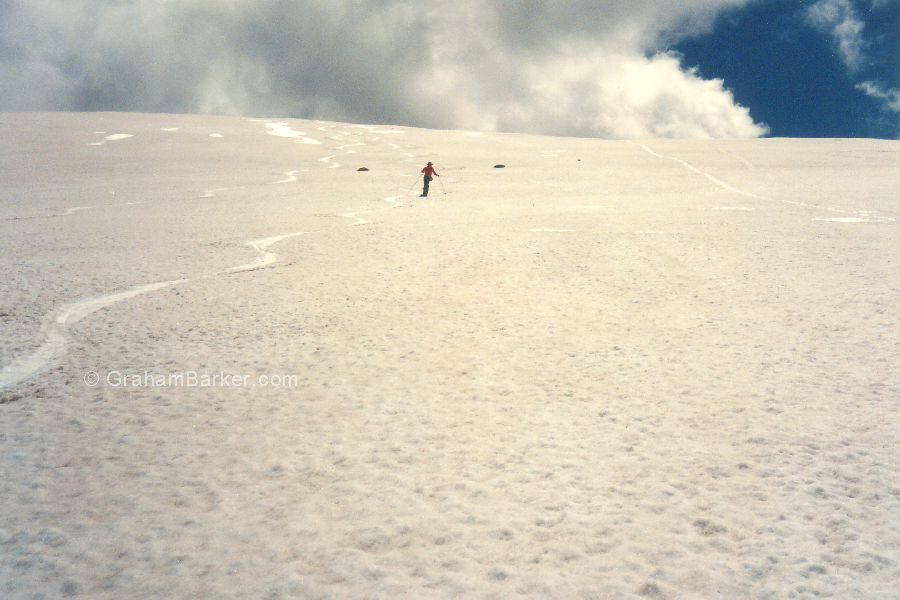 At times it was frustrating being on such limited patches of snow - just as I'd be getting into a rhythm and building up speed, the snow would run out. Which brings me to an important point: you may not need to be an expert to ski on spring snow patches, but you MUST be able to stop when you want to. Hitting bare ground or rocks at the bottom can hurt. I know.

For every frustration there was a pleasure to compensate, one of them being the short but satisfying slide down the steep eastern side of Mt Kosciuszko. Thousands of people hike to the top of Australia's highest peak in the warmer months, but few get to ski down it. It was a buzz, and I felt privileged.

It wasn't just me skiing unseasonally - I was joined on occasions by an older guy named Charlie who was also staying at the youth hostel in Thredbo. Unlike me, he had skied the Snowy Mountains back country in winter, and knew many good ski spots where the snow lingered. He also brought skis with him, and his presence encouraged me to try trickier and smaller snow chutes than I might have otherwise.

In short, summer skiing in Australia is technically possible in most years in the high peaks of the Main Range near Thredbo. The catch is that you are limited to the earliest part of summer (sometimes not even that), need to carry your own gear across hilly terrain, and be satisfied with short runs on damp snow which may only exist in small patches.

It's best done for the novelty of the experience, rather than the quality of the skiing. But if you view it as an alpine hiking experience, as I did, and treat any skiing as a bonus, then a great time can be had in Australia's high country. 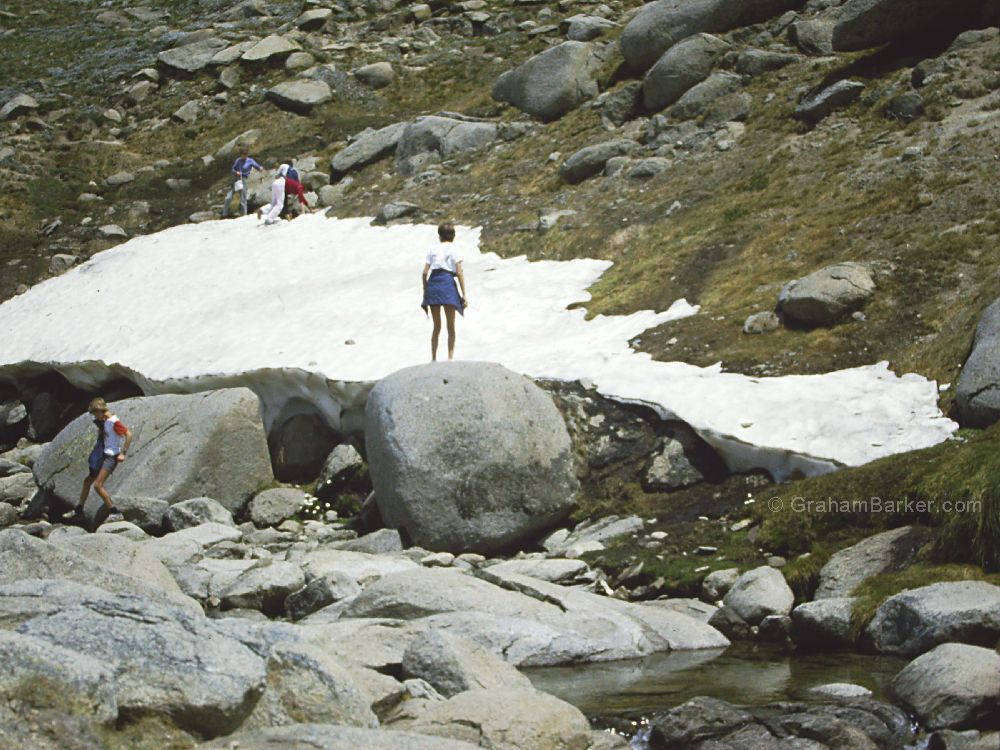 In some years, after Christmas you'd be lucky to find anything bigger than this small remnant of snow near Thredbo

Warm-season snow can vary enormously from year to year, but in a "normal" season in the high parts of the main range near Thredbo you might expect:

October - ski season ends early in month but plenty of snow up high
November - majority of snow recedes during the month but plenty of scattered snow patches remain, some of them extensive
December - still some good snow patches but you may need to walk further to find them
January - some snow nearly always survives into the new year, but varies from isolated medium skiable patches to tiny blobs, or sometimes nothing
February - snow all gone, nothing skiable until May or June

A deluge of spring rain can quickly destroy the remains of even a great winter snow cover, so nothing is guaranteed.

It would be remiss of me not to point out that all the precautions of hiking in alpine areas should be observed. This includes taking food, water, warm clothing, map, telling someone where you're going, being prepared for rapidly changing weather, etc. Also use plenty of sunscreen - the UV light in the mountains can be fierce. Rocks poking through snow and on the surrounding ground can be hazardous, so try not to ski onto them. Although I went snow patch skiing by myself, doing that alone is not recommended for safety reasons.