The Sydney Harbour Bridge Climb is very popular - but what if you are scared of heights or reluctant to spend over $200 per person to climb the bridge? Fortunately there are other ways to get up close and personal with Sydney's magnificent bridge, enjoying great views at little or no cost. 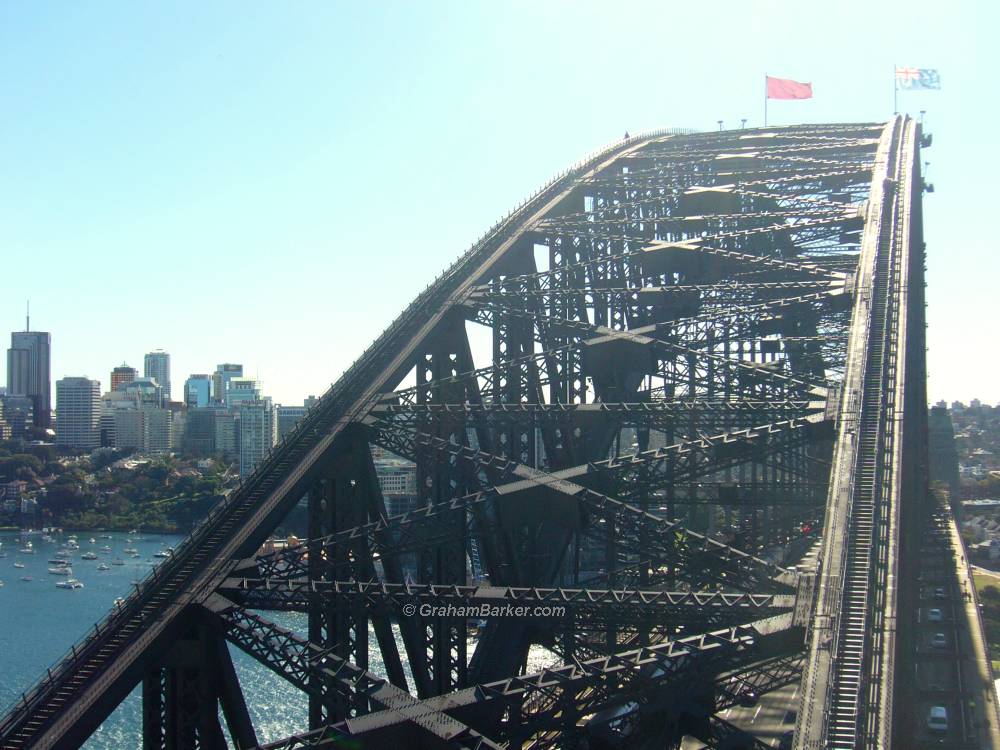 The bridge, from the pylon lookout

One way is simply to walk across it using the pedestrian walkway on its eastern side. This may sound mundane compared to scaling the heights of the arch, but is relatively easy and provides spectacular views of the city and harbour. The only cost is if you walk one way and use public transport in the other direction.

For a one-way walk, my recommendation is to walk from north to south. That way you'll be facing the best part of the view - towards the city - and in the middle parts of the day the sun will be behind you rather than in your face.

The quickest way to get to the north end is to catch a train over the bridge and get off at Milson's Point, which is the first stop on the north side. After exiting the station on the east side, walk the short distance bridge-wards towards the steps which take you straight up onto the bridge walkway.

Another way to reach these steps is to catch a ferry from Circular Quay direct to the Milson's Point wharf then walk up the hill. It's slower and takes more effort, but to compensate you get a view of the bridge from nearly underneath. 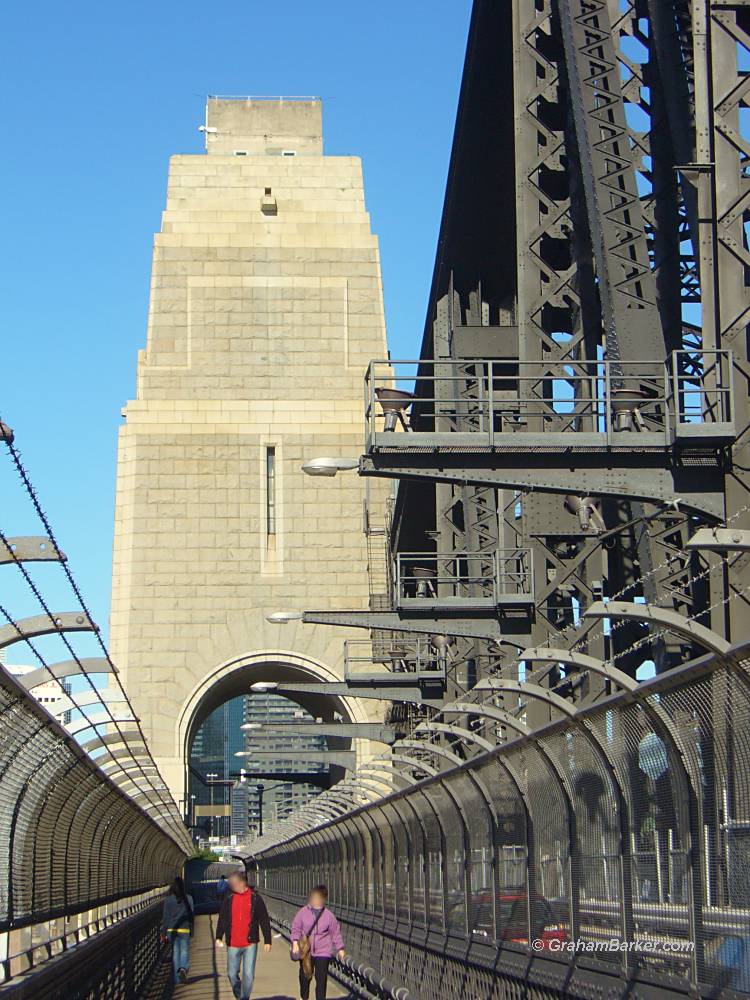 The walkway and south pylon

Once up on the walkway, its a gentle 1.4km stroll across the iconic bridge. To the left lies a truly magnificent view over the harbour, opera house, and eastern suburbs. Ahead and also to the left is the ever-growing mass of office buildings of the city. Walking over the harbour bridge gives you time to soak up the ambience, as well as appreciate the structure of the bridge itself.

The walkway itself is solid and well enclosed by sturdy fencing - all but those most fearful of heights should feel safe and comfortable. Falling off the bridge is not only impossible to achieve by accident, but would be a stiff challenge to achieve deliberately. A cycle path on the west side of the bridge means the walkway is enjoyed in peace by pedestrians only.

At the southern end, steps connect the walkway with Cumberland St in the Rocks area. There are 60 steps at the Milson's Point end, and about the same (I lost count) at the Cumberland St end. Unfortunately there are no other ways onto the walkway, which is bad news for anyone unable to climb this many steps. 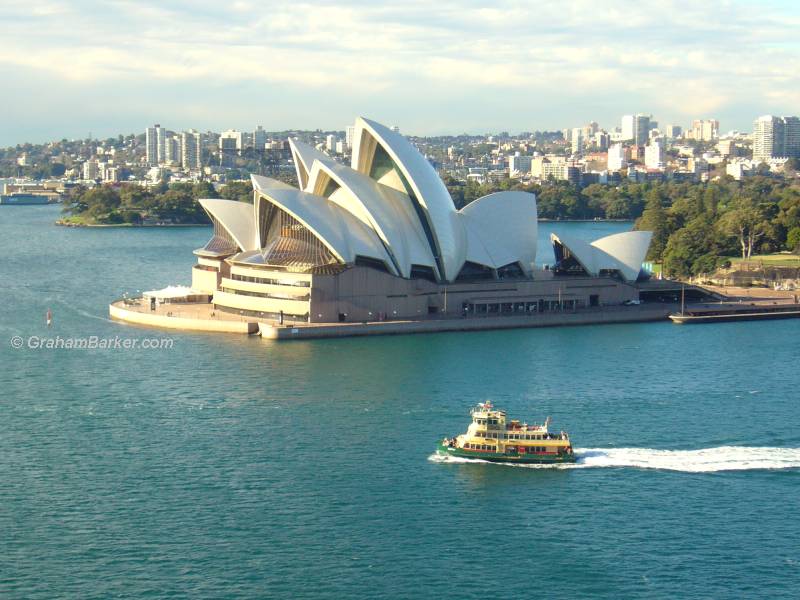 The walkway provides great views of many well known landmarks

Another great way to enjoy the Sydney Harbour Bridge - assuming you don't mind even more steps - is the Pylon Lookout. Of the four massive stone pylons at the ends of the arch, the southeast one (the one closest to Circular Quay) houses a museum with a lookout on top. The museum is dedicated to the history of the bridge, and does a great job of telling how it was built - with plenty of pictures and artefacts. If you want to fully experience the bridge, the museum nicely complements the time spent walking on it and looking at it.

Further steps take you to the lookout - an open air balcony around the very top of the pylon. Views from here are stunning. While the bridge climb takes you to a height of 134 meters above the harbour, the pylon lookout is 89 meters up. It may not be as high, but the difference is not huge. The all round views from the unique perspective of the bridge are memorable, and you can capture the views with your own camera ... Unlike the bridge climb where cameras are not allowed.

I really don't mean to deter anyone from doing the bridge climb. I haven't done it myself, but people I know who've done it say it's fantastic. But if you're at all like me and unsure how you'd cope with the heights - and uncomfortable spending a lot of money to find out - the walkway and pylon lookout provide what I think are satisfying ways to enjoy one of Australia's most famous icons.

Panorama of Sydney CBD and opera house from the pylon lookout

When I last checked (2021), the pylon lookout and museum was open between 10am and 5pm daily and cost $19 for adults. The walkway is free and always open. Bridge climbs started from $198 for adults. As always, check the websites for up to date details.