A historic train journey up a gorge near Dunedin

If you like train rides, and New Zealand's Inland scenery appeals to you, then a trip on the Taieri Gorge Railway is one I can recommend. Big Otago hills, dramatic viaducts and a train with character make this journey into remote-feeling landscapes one to remember. 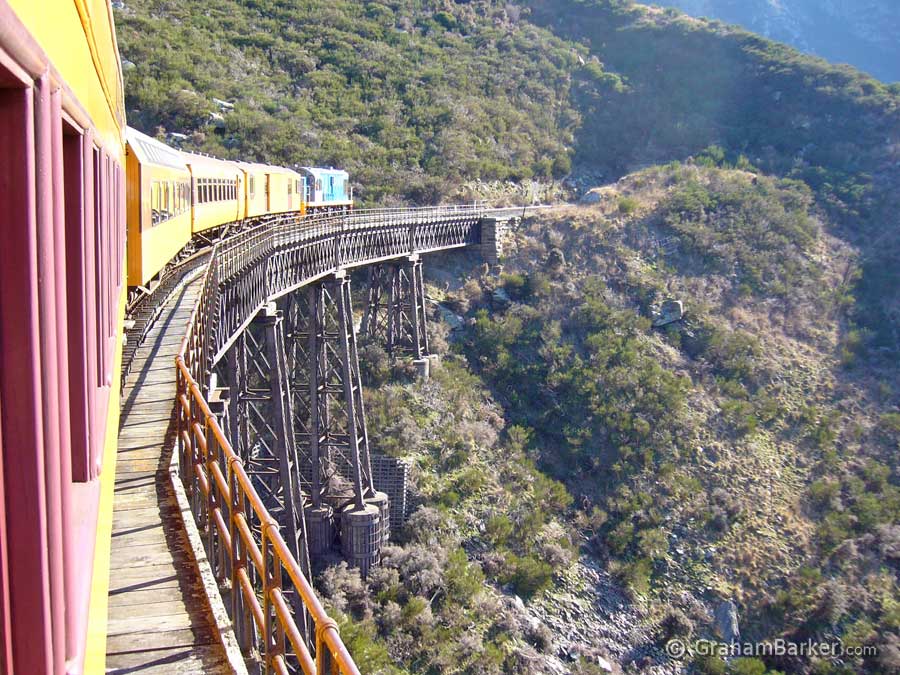 The train trip begins at the Dunedin railway station - a distinctive stone building with a touch of grandeur and history. Once upon a time you could catch a train from here on the southern line between Invercargill and Christchurch, as I did in 1995. Before then you could also catch a train inland to Clyde. Sadly those services closed down, which makes a trip up the Taieri Gorge all the more special.

I joined the train on a crisp, sunny winter afternoon. Heading west, and leaving the main line at the edge of Dunedin's suburbs, I learned some of the train's history.

The Otago Central Railway was begun in 1879 after the gold rush opened up the region inland from Dunedin. With gorges to build bridges over and tunnels to dig, mostly by hand, it wasn't an easy railway to build. It took until 1921 to complete the line as far as Cromwell - that's the last town before Queenstown. 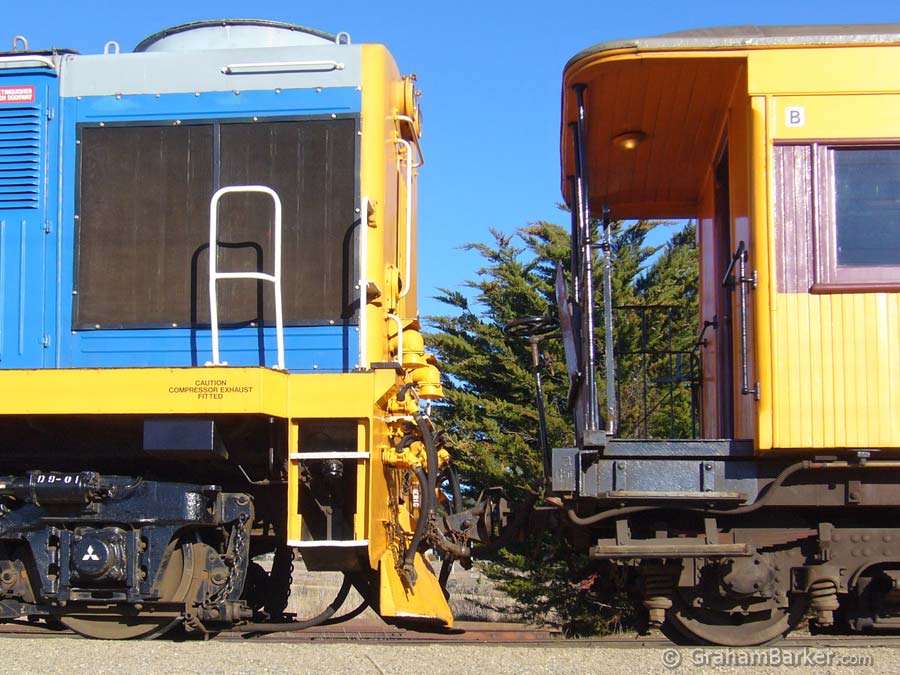 Note the standing room at the end of the carriage

The railway served the area well, but with the building of the Clyde Dam and Lake Dunstan, the last section beyond Clyde was removed in 1980. Following the closure of the line in 1990, the track from Middlemarch to Clyde was also ripped up ... leaving track on just the section from Dunedin to Middlemarch. This is the section used by the Taieri Gorge Railway.

Catering mainly for tourists, there is some commentary to describe the journey, and a number of stops for photos. The stops also provide opportunities to stretch the legs and absorb smells and sounds ... or experience the quietness of sparsely populated areas. However there are plenty of good photo opportunities while the train is running too.

A viaduct seen from further up the line

At the ends of some carriages are open air balconies, where you can feel the fresh air whizzing past and take photos unencumbered by windows. I spent much of the trip standing between carriages, enjoying the chilly wind in my hair and the sounds of the train clickety-clacking through the gorges.

Once the coast is left behind, the hills become bigger and the countryside gradually drier. There are some impressive bridges, deep valleys, and a number of tunnels to pass through. At times the tracks cling to some very steep hillsides. It's tricky terrain to build a railway through, but this makes for a very attractive train ride.

A stop at Pukerangi marked the end of my outward trip, with time to get out and soak up some of the dry rocky landscapes that make the less visited parts of Central Otago so appealing to artists. Then it was back on the train for the return to Dunedin. Same route, but with less commentary than the outward journey. 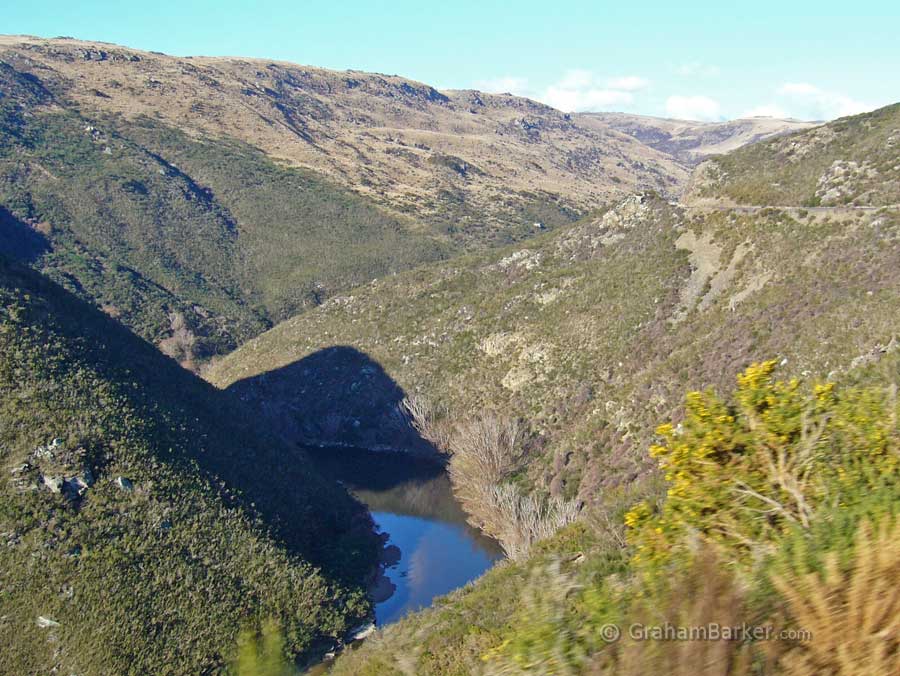 The Taieri River down below

A mini bus connects with the train - either at Pukerangi or Middlemarch - and continues through Ranfurly to Alexandra and on to Queenstown. For anyone who enjoys the less travelled routes - in this case across the Maniototo region - this would be a novel and more scenic way to travel between Dunedin and Queenstown.

For cyclists or long distance walkers, the Taieri Gorge Railway is a great way to access the Otago Central Rail Trail. Where the train stops, the rail trail begins. You can take a bike on the train for a one way ride, then get off and continue under your own steam on the well graded surface where the ripped-up tracks used to be.

Most people, however, enjoy the Taieri Gorge Railway as a half-day trip while in Dunedin. I hesitate to use the tourism cliche "must-do", but I think anyone who enjoys trains really ought to do it. You get not only a great journey up an awesome piece of track, but also a glimpse into a distinctive corner of New Zealand that most visitors don't get to explore. 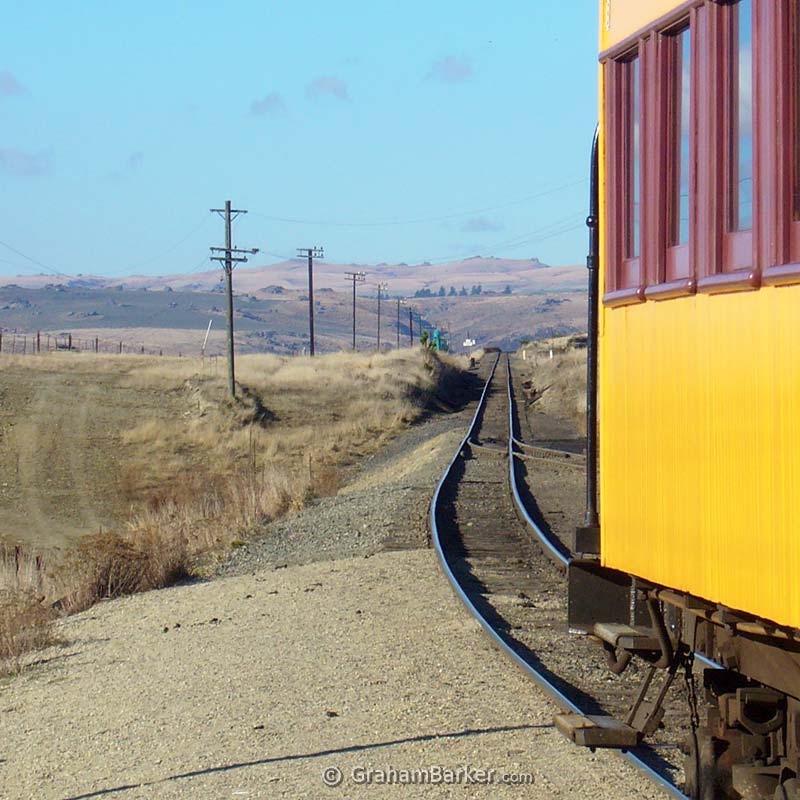 Update: Train trips up the Taieri Gorge Railway are in 'hibernation' due to the economic effects of Cornavirus. The company still exists and runs shorter journeys - see their website for details.

Dunedin Railways - operators of the Taieri Gorge Railway, and other trips 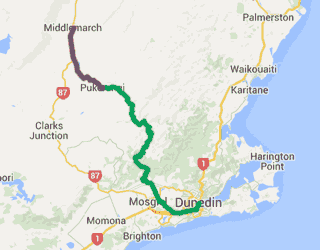