Mist on the Pieman River

The Tarkine region of Tasmania is special: a wilderness containing Australia's largest surviving remnant of temperate rainforest, plus other natural goodness. Wilderness implies limited access, but there are a few ways the traveller in a conventional vehicle can easily sample some of the Tarkine. I chose the tiny outpost of Corinna, and found a rainforest and river experience any greenie would drool over.

If you look for the name Tarkine on a map, you probably won't find it. The name applies to a general region rather than a specific named area. Some widely accepted boundaries are the Pieman River in the south, the Arthur River in the north, the ocean to the west, and the Murchison Highway to the east ... but nothing is official. 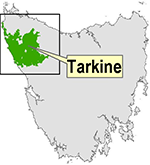 The area considered for national
heritage listing (from Wikipedia)

It isn't all rainforest either. There are also woodlands, button grass moors, and coastal heath, scattered across hills, river valleys and plains. Wildlife and Aboriginal heritage combine with the landscape to make this largely unspoiled area unique in Australia, if not the world.

But is is the beech and myrtle rainforest that most associate with the Tarkine, and which drew me to the somewhat out-of-the-way place called Corinna. It began as a small mining outpost back in the gold rush days. Nowadays Corinna survives as a small group of accommodation cottages, a tiny campground, and a small building which functions as a visitor centre, tavern, restaurant and shop. Other than that it's just the placid Pieman River and the rainforest, uncontaminated by TV or mobile reception.

Hills between Corinna and Waratah

Getting to Corinna is a process that helps keep the crowds away. There are no buses - you need your own transport. From Waratah, just off the main roads, it is a slow 90 minute drive along a gravel road which is smooth but narrow with lots of bends. The only other way in is from the south, where the Pieman River presents a very effective restriction to traffic volume. There is no bridge, only a daytime-only barge which carries one vehicle at a time across the 130 metre wide river, very slowly, at a cost of $20.

Having stayed at Corinna a few times, I'm glad there is no bridge. The lack of through traffic helps maintain the peace and quiet that such a magnificent natural setting deserves.

In the campground at Corinna

If you stay in the camping area, then you're already in the rainforest. The small number of secluded sites are well sheltered by natural vegetation, with a couple of tent platforms being well-sited right next to the river. At the far end of the campsites is a lush shaded trail disappearing into the forest and almost begging to be followed.

This is the Whyte River Walk, a delectable ramble which follows the Pieman River upstream, then up alongside tributary Whyte River, then up through the forest and back to Corinna in a loop. It is listed as a 70-90 minute round trip, but if you've come here to soak in the ambience of an ancient Gondwanan rainforest, or you're into photography, then much more time could easily be spent here.

An easier option than the whole track is to just follow it along the river until you feel like turning back. You don't need to go far to get that feeling that you're in a place where nobody else has ever been. Not quite true, but it can feel that way.

On the Savage River Track

Walking in the other direction, past the boat jetty, takes you onto another beautiful forest track. The first few hundred metres are designated as the Huon Pine Walk, a wheelchair-accessible trail with signage shedding light on the plants and surroundings. Beyond this it becomes the Savage River Walk and continues on damp ground beside the river and over a large hill to the Savage River. It is listed as a three hour return walk, but like the other track it can easily take longer if you slow down to study the surroundings ... as everyone should!

Stopping to smell the smells and feel the vibe is highly recommended. The ambience and gentle sounds of the forest are best experienced with a bit of stillness and quietness, rather than just hurtling through it. And there is so much detail to see, when you take the time to look. The mild damp climate promotes an abundance of life - it seems that every available surface has something growing on it.

The magnificent Pieman River can also be explored on canoes which can be hired at Corinna. I haven't done it, but if I was going to try canoeing it would be hard to imagine more beautiful surroundings. On the usually placid waters even I could probably manage to stay upright.

Another way to enjoy the river, which I have done and heartily recommend, is to take a river cruise from Corinna to the Pieman Heads where the river enters the wild ocean. A small wooden boat, oozing character, meandering through pristine forest is a great way to spend a few hours. It can be a perfect complement to the hiking and the time spent simply being still.

Staying at Corinna is probably the best way to get immersed in the Tarkine rainforest, short of doing a multi-day hike through the area. Accommodation, including campsites, is limited, and cars approaching from the south can queue up waiting to cross on the barge on busy days. But outside of holiday periods it is usually peaceful and quiet.

I've visited in winter and can recommend that time of year - nights are milder than much of Tasmania and you get more choice of campsites, although the boat trips may not run every day. But whatever the time of year, it is beautiful.

There are proposals to create a Tarkine national park and finally give the whole area some protection rather than just the small portions currently in conservation areas. However there are also mining companies with their eyes on the Tarkine' resources, and with dreams of roads, power lines and open cut mines.

The outcome remains to be seen, but the possibility of jobs winning out over nature makes me even more glad that I've been able to sample bits of Tarkine rainforest and river in its current state. Not perfect wilderness ... but delightfully close.

Here is some video I shot in and around Corinna, showing the tranquil beauty of the Tarkine Rainforest along the Pieman and Whyte Rivers. Music: Rest by Riverview Worship

Corinna - accommodation and activities at Corinna
The Tarkine - a tourism site by the Cradle Coast Authority with lots of information about the area, including maps
Save the Tarkine - a site by environmental group Tarkine National Coalition. Lots of useful information with a pro-environment perspective, including their national park proposal