When I did the boat cruise at Tasmania's Bruny Island - and loved it - I was interested to learn that the same company also operate a trip around the Tasman Peninsula. Awesomely iconic coastal scenery, plentiful wildlife, Australia's highest sea cliffs, all in an exhilarating fast boat ... could it live up to my high expectations?

Pennicott Wilderness Journeys earned my respect with their original cruise at Bruny Island. Their competence, local knowledge and concern for the safety and comfort of guests impressed me. As did their obvious genuine love of the coastal environment. Throw in some spectacular looking coast, and I was expecting a great experience on the Tasman Island cruise.

Having higher expectations can bring with it a greater risk of feeling disappointment, but not in the case of this trip. The boat cruise stirred many emotions, but disappointment was not among them.

I joined the trip at the tour office in Port Arthur - the village, not the nearby historic site. A friendly welcome and briefing was followed by the fitting of windproof and water resistant orange overalls. Not the latest in fashion, but very practical. You just need to turn up in clothes which are warm enough; they take care of the outer layer.

In gorgeous sunny weather, we were all keen to get going. However there was one last bit of preparation to take care of - ginger tablets. As with the cruise on Bruny Island, the crew handed out these tablets to help prevent sea sickness. They seem to work for me.

Then we were off. The old convict colony at Port Arthur appeared on the right as the small boat accelerated to an impressive speed. Soon the guide was pointing out features, including a very robust-looking eagle's nest atop a tall tree. Unfortunately the eagle must have been out fishing.

Out in open sea the swell picked up. And so did the scenery - the Tasman Peninsula is bounded by a delightfully rugged coastline. Massive sheer cliffs, jagged dolerite columns, small rocky islands, pillars and caves all lure the camera lens. Add the national park's unspoiled bush and a generous helping of sea birds and seal colonies, and you have an environment which is simply magic. Speeding through this scenic goodness on an exhilarating boat ride should put a smile on anyone's dial.

Inside a sea cave

It's not all fast, though. The boat crew frequently slow down or stop to allow a closer look at points of interest ... and provide photo opportunities.

One stop took us into the entrance of a small sea cave. Several pauses were made to admire the local wildlife - a sheer rock face where birds nested, a couple of seal colonies, not to mention the odd eagle and albatross. Other stops were made so that our host could point out features of the scenery.

In each case the boat was slowly and thoughtfully rotated, so that people on each side had a turn at getting a good view for the unmissable photos. So it doesn't really matter which side you sit on.

The guide on my boat was very happy to answer questions, of which there were many ... I think his clear love of the area encouraged passengers' curiosity. His answers also revealed much knowledge: this was not a tour guide reading from a script.

One of many highlights for me was Tasman Island - the rocky island the boat tour is named after. During a scenic stop we heard the swashbuckling tale of how materials for a lighthouse and other buildings - plus hundreds of sheep and cattle - were unloaded onto the island.

With no safe place to dock, cargo and people were lifted directly from the deck of their ship, heaving in the swell, and while dangling from a cable were winched across to the island. From there a wooden tramway hoisted them up the precariously steep slopes to the plateau on top. Even on a nice day with low swell it looked like a frightening journey.

The goods hoist and tramway

Near Tasman Island looms the 300 metre high bulk of Cape Pillar, apparently the southern hemisphere's highest sea cliff. Tasmania is distinguished by its many cliffs of dolerite columns, but they are at their most spectacular when soaring directly out of the sea, as they do here.

But size isn't everything. Just as gob-smacking were some of the tall and skinny rock columns the boat passed by ... rather closely. Some of their names, such as "The Totem Pole" and "The Candlestick" are very fitting.

Nearing the end of the trip, we passed the 80 metre high waterfall responsible for the naming of Waterfall Bay. Then came Tasman Arch; gazing up through this natural bridge we could see people looking back down at us.

Finally the boat docked at Pirate's Bay, next to the quirky shack community of Doo Town near Eaglehawk Neck. A toilet stop, a bus trip back to Port Arthur, and the trip was done. Did it live up to my high expectations? Too right it did!

Finally, I should point out that the smooth sea and clear blue sky seen in these photos and the video are not the norm. Good weather is not unusual, but calm sea is, and experiencing both at the same time is uncommon. As pleasant as smooth sailing can be, I'd still love to see this coast in a boisterous sea. Maybe next time.

This illustrates the boat trip along the coastline of the Tasman Peninsula from Port Arthur to near Eaglehawk Neck, visiting Tasman Island, dramatic sea cliffs and assorted wildlife. It was hard to get steady footage from an erratically moving vehicle, but these snippets give a taste of what it was like.
Camera and video: Graham Barker
Music: Tomorrow Untrodden by The Flashbulb 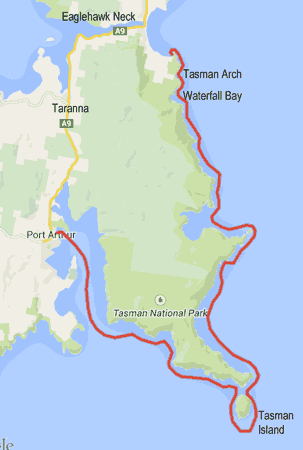 See footer for links to interactive maps
Short link for this page: rdu.pw/208