An unforgettable skiing adventure on the longest glacier in New Zealand

Even the most cheapskate budget traveller will occasionally want to splash out on something luxurious. If you're visiting New Zealand and into skiing, then one luxury to indulge in is skiing the Tasman Glacier, the longest river of ice in New Zealand's southern alps. I did it once, and have never regretted what was a truly out of this world experience.

Skiers preparing to set off down the Tasman Glacier, New Zealand

The Tasman Glacier begins among lofty peaks near Mount Cook, New Zealand's highest peak, and is about 27km long. Ever since I learned to ski, and learned that people could ski this glacier, it was something I dreamed of doing. As I became less wobbly on my skis within the confines of ski resorts, the idea of swishing down ungroomed powder at the top of a remote glacier became more feasible. Then I found out how expensive it was. How could such extravagance be justified, or even afforded?

One of the ironies I've noticed about budget travel is that being really frugal 99% of the time makes the occasional luxury more achievable ... and easier to justify. That's what happened on my longest visit to New Zealand - in the months of living a self-catering backpacker hostel lifestyle I wasn't spending much more on basic living costs than I would have spent back at home. Knowing that the opportunity might not come again, a couple of carefully selected costly indulgences got my approval. One was a scenic flight to Milford Sound, and another was the Tasman Glacier.

On arriving at Mount Cook Village, anticipation grew. The weather down in the village was cold and inclement, but this meant fresh snow would be falling up on the glacier. I registered my interest, then I waited ... something anyone wanting to ski by plane or helicopter should be prepared to do. Three days and up to two meters of fresh powder snow later, the weather cleared to sunny perfection. Crystal clear blue sky, calm, and cold enough to keep the snow at its powdery best.

Panorama of icy peaks from a ridge above the Tasman Saddle

I joined many other excited skiers at the tiny Mount Cook airport. At first I felt a little out of place - most were older and more experienced skiers than me - but soon the joy of the day's adventure transcended any personal differences. When someone noticed my old fashioned narrow skis, I was promptly loaned a set of fat powder skis, so that I wouldn't sink in the soft snow. This proved to be invaluable.

The jolly crowd was divided into small groups and ferried up the glacier in small ski planes. On the spectacular scenic flight, a massive avalanche was seen hurtling down the side of Mount Cook - a timely reminder of why we were all wearing avalanche transceivers. If any of us were to get buried in snow, having a method of locating the body would be handy. 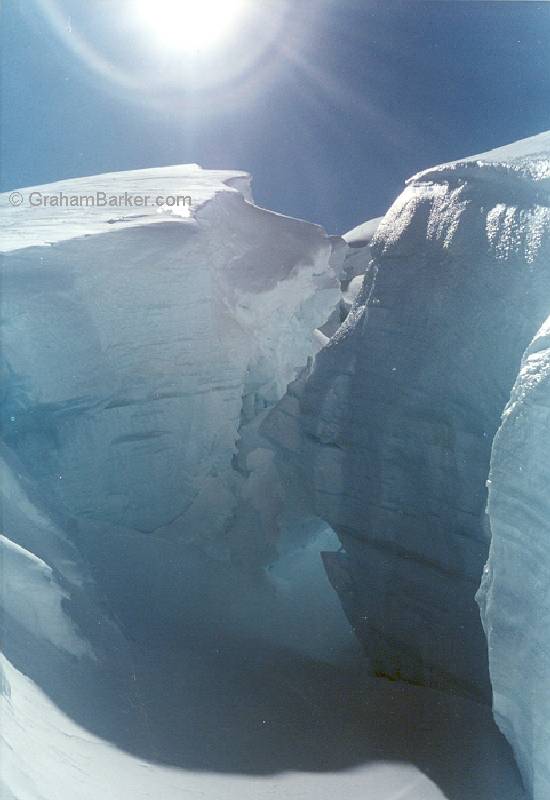 With skis fitted to the wheels, the plane landed smoothly in the soft snow at the top of the glacier. Once we had unloaded our gear and the plane had left, the silence was almost total. Not a breath of breeze, just stillness and quietness in which to bask in scenery which could only be described as awesome. We had been landed at the Tasman Saddle, right on the divide, so the views were all-round. In one direction the vastness of the upper glacier flowed gently past Mount Cook in a valley heading towards the east coast. A peek over the ridge in the other direction revealed steep valleys plunging dramatically towards the west coast. Not bad.

One of the features of the Tasman Glacier ski trip is that it is not all about skiing - it is just as much about exploring nooks and crannies of the glacier and enjoying the environment. After some dreamy gliding down perfect unblemished powder snow, our guide diverted us into the other-worldly scenery of the Darwin Ice-Fall. There were giant crevasses we could ski into, free-standing ice towers (seracs) looming above us, and a sense of our smallness in this icy landscape. These sorts of diversions became a highlight of the day for me; we were given plenty of opportunities to stop for photos and to just enjoy being there. 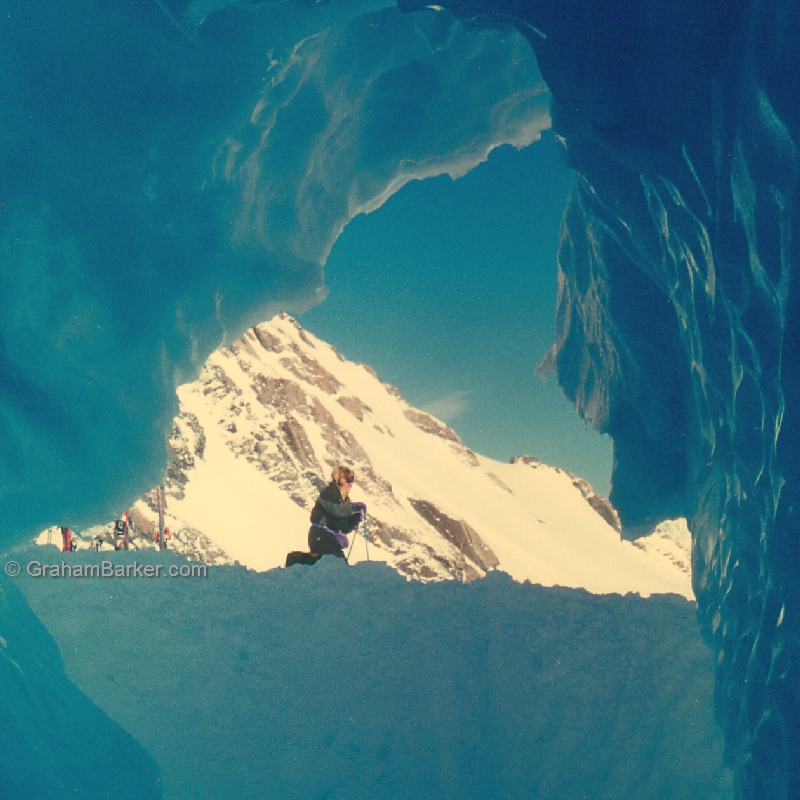 Looking out of an ice cave

The skiing itself was pretty good too. It isn't very steep - any competent intermediate skier should be able to handle it - but the quality of the snow and scale of the landscape set it well apart from skiing in a normal ski resort. If you're mainly seeking steepness and technical challenge, then the glacier may not satisfy. But if you're like me and enjoy the mountain environment as much as the skiing, then the Tasman Glacier could blow you away. I was certainly blown away by it.

The first run down the glacier took us about ten kilometres - beyond this the slope becomes too gentle. By then it was time for lunch, which consisted of a picnic in the snow with some of New Zealand's highest mountains looming over us. I can't imagine any posh restaurant having a grander setting. 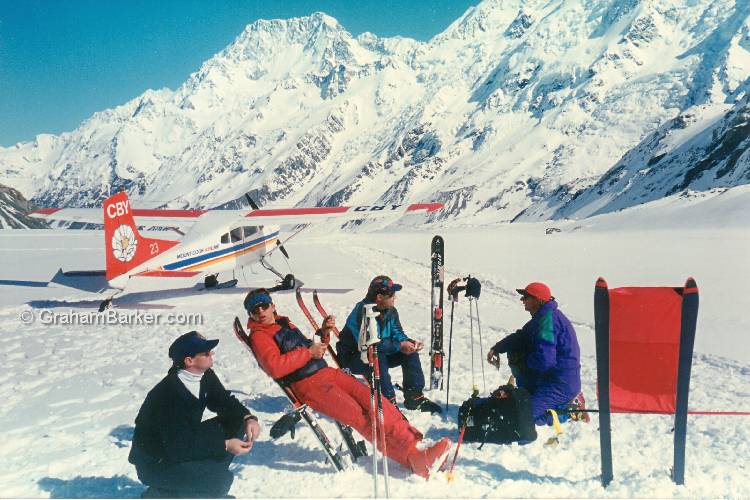 The afternoon normally starts with a second ski plane flight back up the glacier for a second trip down it. On the day I was there, a helicopter was used for the second trip, which provided more options for the landing area. After a magnificent journey, my memorable first helicopter ride, my group was deposited on the shoulder of the Hochstetter Dome, one of the highest peaks near the top of the glacier. The Tasman Saddle had felt like the top of the world, but this was even more lofty.

Several groups were landed, then after a safety briefing and time to admire the view we set off on different routes, each group with a guide to take us through interesting ice formations. Groups are arranged according to skiing ability, so those less experienced on powder (like me) are guided through more suitable terrain. I appreciated this, as I didn't fancy sliding out of control into a crevasse. 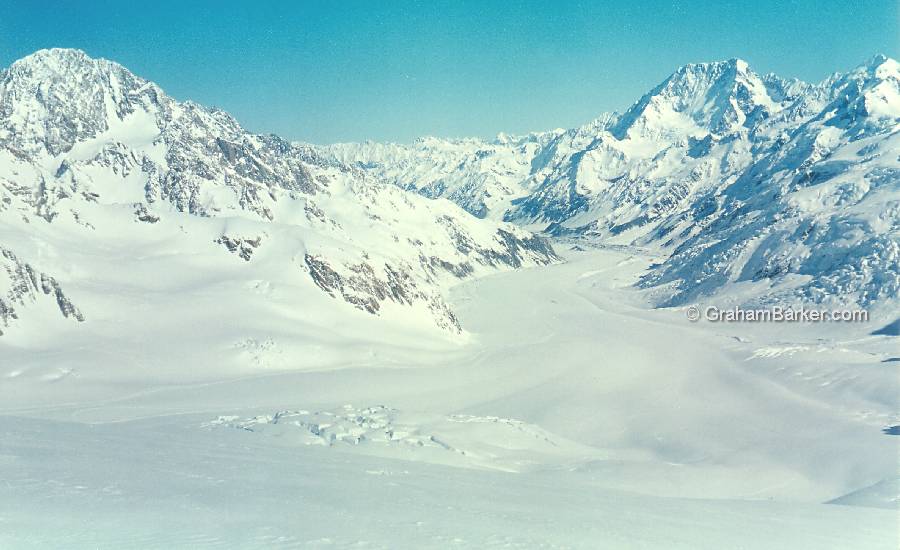 The second run down was just as beautiful as the first, with a snow cave visit among the diversions. I was new to skiing with fat skis on deep powder, but by now it had become almost second nature. It was satisfying to look back and see some very neat turns carved into the blank canvas of the fresh powder ... and to know that I had made them.

After the second run, we re-boarded ski planes for the flight back to the little airport and the shuttles back to the village. The difference between myself and the other skiers reappeared - most of returned to their luxury accommodation at the Hermitage, while I walked back to my budget bed at the YHA hostel. It didn't matter though; I was on such a high after the day's experiences I don't think I would have cared where I was staying. Although having said that, the hostel at Mount Cook is a rather good one. 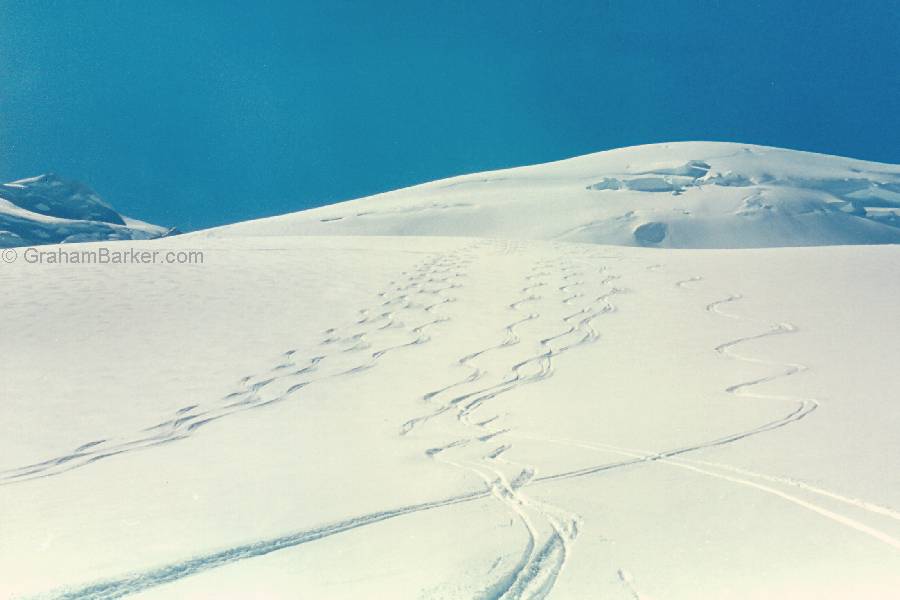 Have I ever had any regrets about this extravagant day of skiing? None whatsoever! On the contrary, I would have regretted not doing it. Thanks to a knee injury I no longer ski, so the door has closed on that sort of adventure. The cost has risen a lot since I did it, and with a bigger mortgage I'd think twice about that sort of expense now anyway. Which makes me all the more glad that I did it when I had the opportunity. Skiing the Tasman Glacier was like a personal Mt Everest for me, a high point of my skiing life, and I feel very blessed to have been able to experience it.

Those who don't ski need not feel completely left out. There are ski plane flights which take you to the top of the Tasman Glacier for sightseeing, which makes the magic of that location accessible to more people. As a non-skier these days, such a flight will be tempting me next time I pass that way.

Here is my video overview of the day. It's long (6 mins 22 sec) because I wanted to illustrate all aspects of the trip, from the flight up to the flight back down. As you'll see, it's more about the scenery than the skiing, or at least it was for me. The avalanche I mentioned appears from about 26 to 35 seconds in.

Ski the Tasman - lots of info about the trips which run June to October in good weather only. You need the flexibility to hang around if the weather is bad.
Mount Cook Ski Planes - the company operating the planes which land on the Tasman Glacier. They have various scenic flights, with or without glacier landings.