For skiers and snowboarders, the south island of New Zealand offers a smorgasbord of around twenty ski areas, ranging from small and quiet to huge and popular. Even if you're like me and prefer the out-of-the-way options, it sometimes pays to follow the crowd. There may be very good reasons why somewhere is popular, and this is the case with Treble Cone, a ski area near Wanaka. It is huge and well patronised ... and fantastic in so many ways. 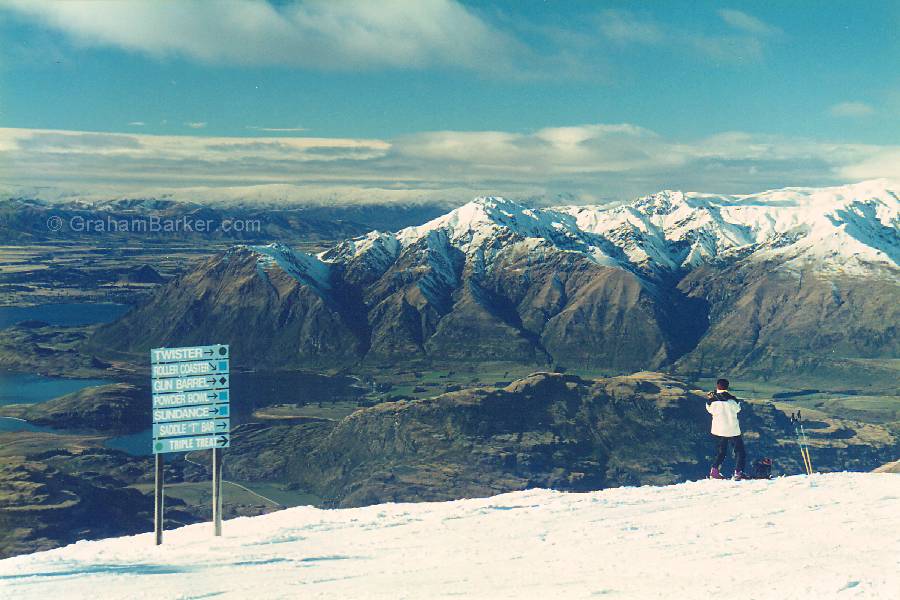 Looking across to Roy's Peak from Treble Cone

The first thing that hit me about skiing at Treble Cone was the scenic beauty, and not just that of the ski area. The base town of Wanaka is set on the edge of a lake and surrounded by mountains in a setting I can only describe as glorious. Perhaps not quite as in-your-face stunning as nearby Queenstown, but magnificent nevertheless. Many find it just as beautiful, perhaps appreciating the more sedate atmosphere of Wanaka which is a smaller and less frenetic town than Queenstown.

The journey to Treble Cone follows the edge of pretty Lake Wanaka, before ascending what must be one of the more hair raising mountain roads in New Zealand. In a country known for the scariness of its ski area access roads, that's saying something! If you're used to steep gravel roads cut into precipitous mountainsides, narrow and slippery in places, and with few crash barriers separating you from tumbling to certain doom, then you'll feel at home on this road. 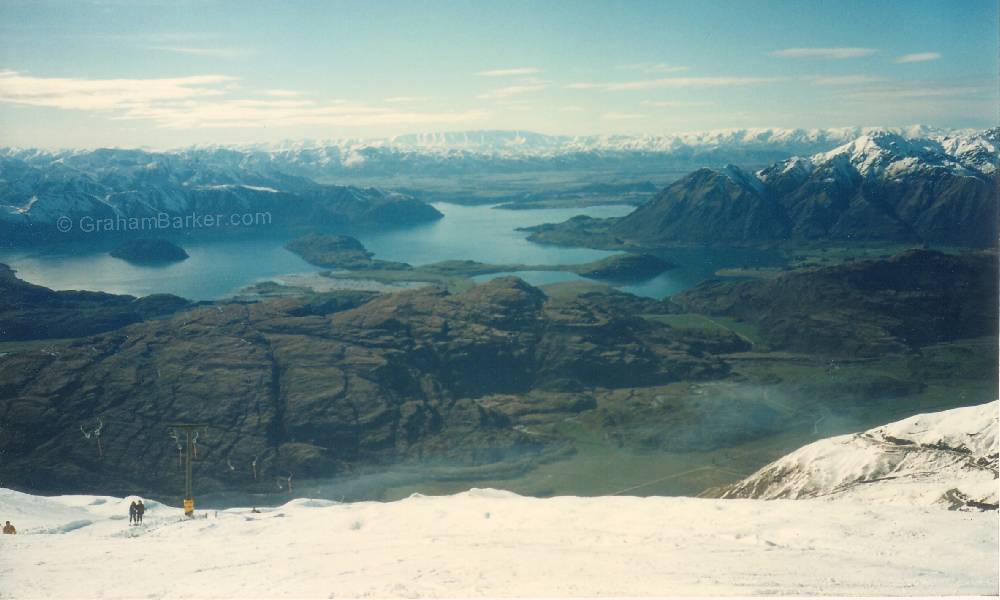 The rest of us will enjoy the great views from this spectacular road much more by taking one of the regular buses, and leaving the driving to someone experienced. That's what I did, and was able to appreciate the journey in the knowledge that the driver knew the road well.

On a fine sunny day, the views from the ski area are superb - possibly the best from any ski area in New Zealand. The browns and greens of the valleys and lower slopes, contrasting with the clean white snow and the rich blue of Lake Wanaka, make the vast panoramas an alluring sight in good weather. In my opinion the views from Treble Cone are on a par with Lake Louise, reputedly one of the most scenic ski areas in north America. Maybe better, but I could be biased.

A couple I stayed with in Wanaka sometimes visit the cafe at Treble Cone on sunny winter days just to have lunch and admire the scenery, and I can understand this. However, if you are on skis (or a snowboard) it gets even better. From near the summit the views are more extensive, and the western end of the slopes provide lovely views up the Matukituki Valley towards lofty Mt Aspiring. It is commonplace to find skiers "resting" and gazing into the distance. 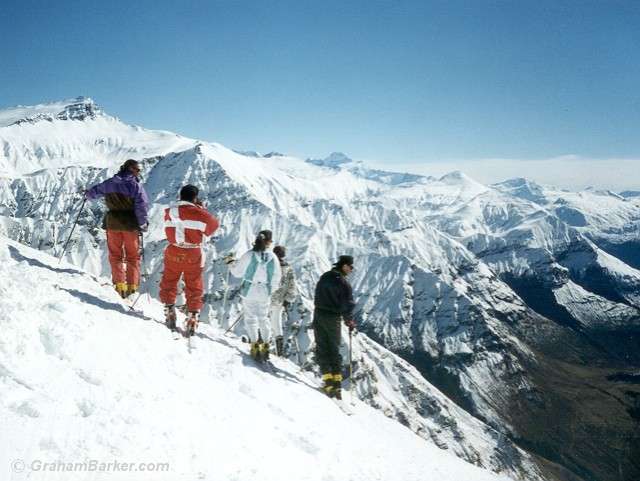 Black Peak and the Matukituki Valley 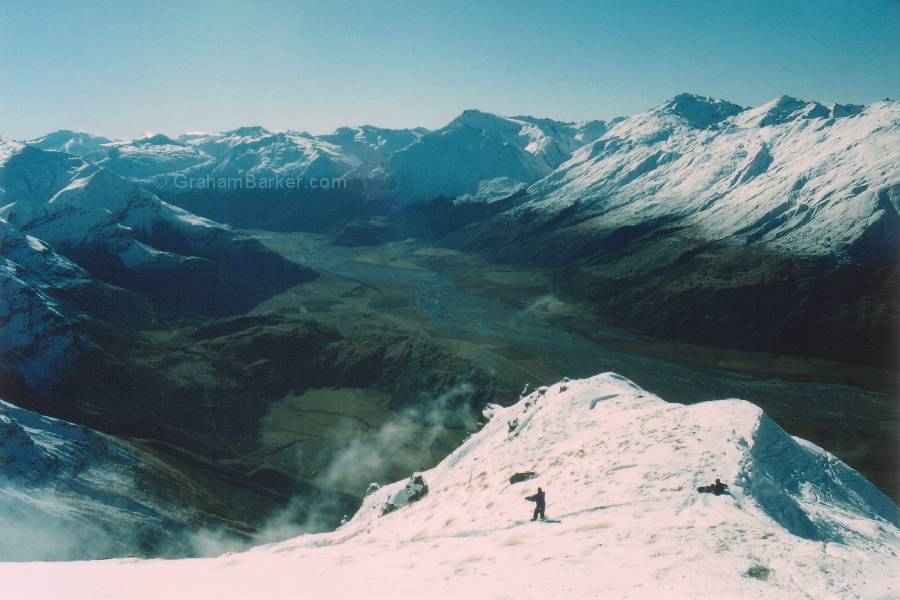 The skiing is also superlative. Treble Cone has a vertical drop of 700 metres, almost the largest in New Zealand and bigger than the biggest in Australia. This makes for nice long runs, with enough variety to make it interesting. There are wide, smoothly groomed trails, and plenty of ungroomed terrain to explore. Snow quality can vary, but in packed powder following a winter storm it could be described as paradise.

A possible downside is the lack of slopes suitable for beginners. Only about 10% are classified as beginner standard, and much of this is steeper than beginner slopes elsewhere. This can discourage learners, who might feel their options are limited. However it works in favour of intermediate and advanced skiers who will find plenty of challenges at Treble Cone. I was a "competent but not spectacular" intermediate skier when I first visited, and enjoyed the challenges of steeper slopes than I was used to. There may have been some big tumbles, but because I was stretched a bit, I improved. 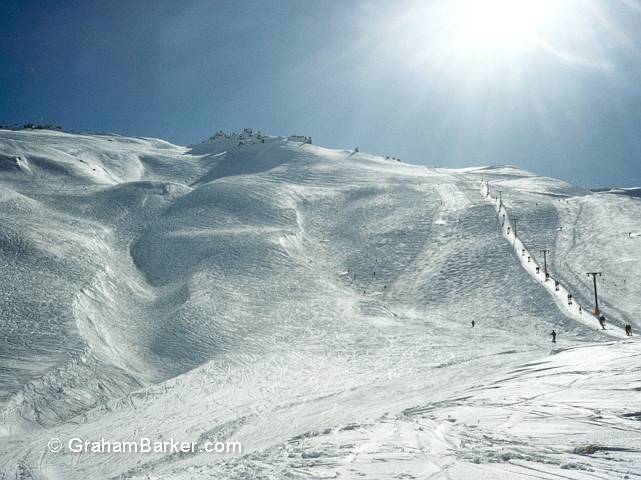 The summit slopes from Saddle Basin

It can get rather busy at Treble Cone when conditions are good, but not so busy as to interfere with enjoying the place. The main express chairlift seems to cope well with crowds, and once at the top there is plenty of space for people to disperse into. When I was there I managed to avoid colliding with anyone, even on the busiest trails, which is more than I can say for other major ski areas.

Visiting Treble Cone is best done while staying in or near Wanaka, the nearest town. Day trips from Queenstown are possible, but the long distance and travel time make this best suited as a one-off visit for those not planning to stay in Wanaka but wanting to sample its skiing. Travel times are much shorter and transport is frequent from Wanaka in the snow season. And Wanaka is worth visiting for many other reasons - a lengthy list of activities and attractions, in a scenic friendly town small enough to get around (mostly) on foot.

Others' opinions may vary, but if you're not a beginner, and appreciate scenic environments as much as good skiing terrain, then I would rate Treble Cone at the top of the list of New Zealand skiing experiences. Especially if staying locally in Wanaka. It nicely complements the quieter and more remote experience of skiing at Rainbow Valley, which I've written about elsewhere.

Even though I don't ski any more, I look forward to revisiting Treble Cone on a sunny winter day for lunch and a walk, and to enjoy the scenery. 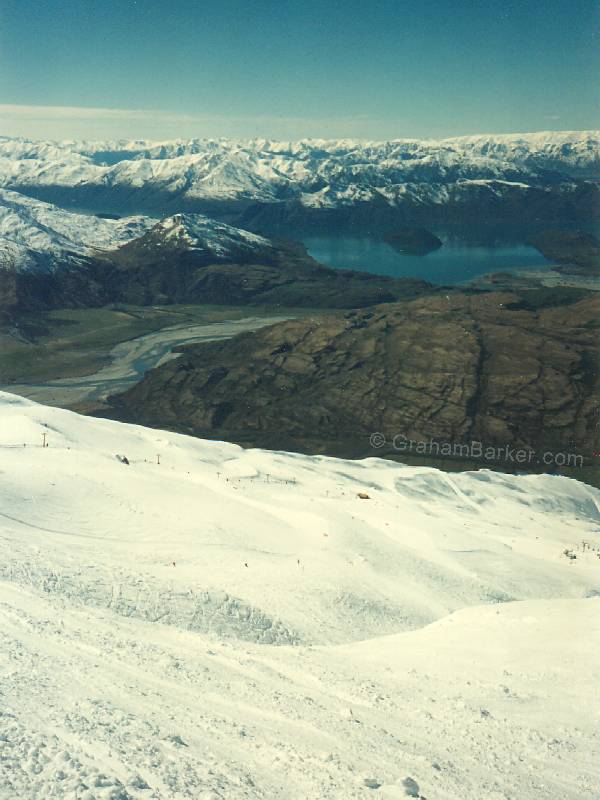 This footage illustrates skiing at Treble Cone in New Zealand and captures some of what makes it such a beautiful place to ski or snowboard. Music: Love, Again (Instrumental) by Van Risseghem 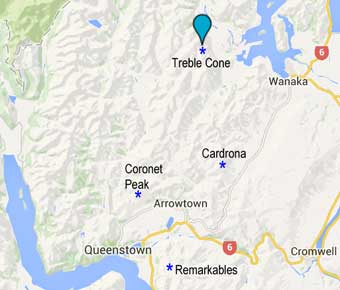