A tranquil bird and wildlife sanctuary visited from Stewart Island, off the south end of New Zealand

When you visit Stewart Island, off the southern tip of New Zealand, it can feel like entering another world - a remote and almost untouched world. Yet it doesn't end there. From Stewart Island you can visit a much smaller and even more pristine island - the wildlife sanctuary of Ulva Island. 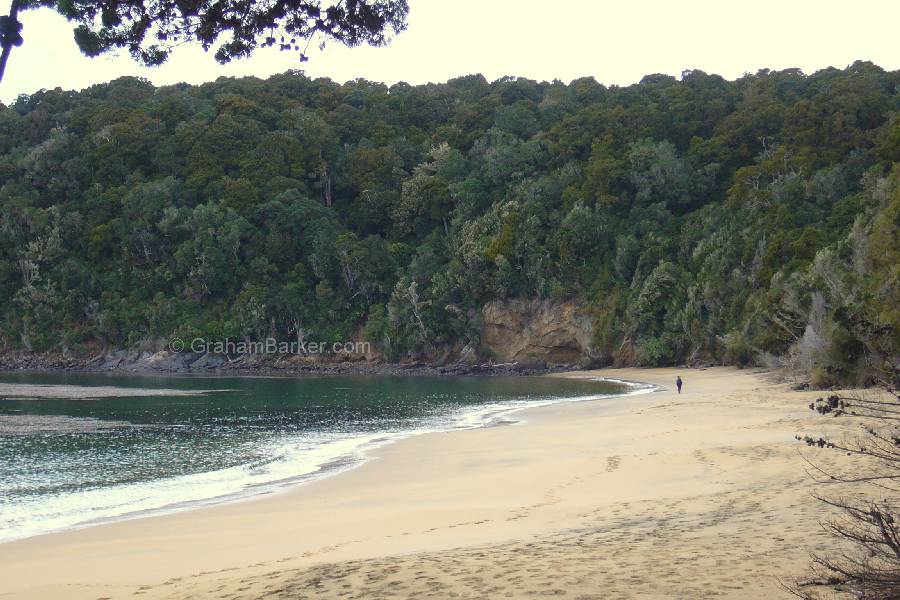 Exploring a beach on Ulva Island

I was visiting Stewart Island to walk the Rakiura track, and had enjoyed the peaceful and lush forest on this walk. Reading that Ulva Island was even more special aroused my curiosity. The best way to explore it appeared to be with one of the highly rated guided tours, so I found a telephone and rang Ulva, the woman leading the tours, and who was named after the island. As well as being experts in the plant and bird life, Ulva and her other local guides share the history and culture of the area.

Unfortunately no tours were running in the coming days - one of the few negatives of visiting out of the way places in the low season. However, she offered to arrange a water taxi for myself and a few others who had also rung her, so that we could still go there and have a look around for ourselves.

Next morning, I and a handful of others staying at the backpackers walked the ten minutes to the jetty at Golden Bay. Ulva Island sits in Paterson's Inlet, the main inlet on the east side of Stewart Island, and is a short boat ride from the jetty we were picked up from. Being transported in a small boat arranged just for us felt rather exclusive and personal, and was a good start to the trip. 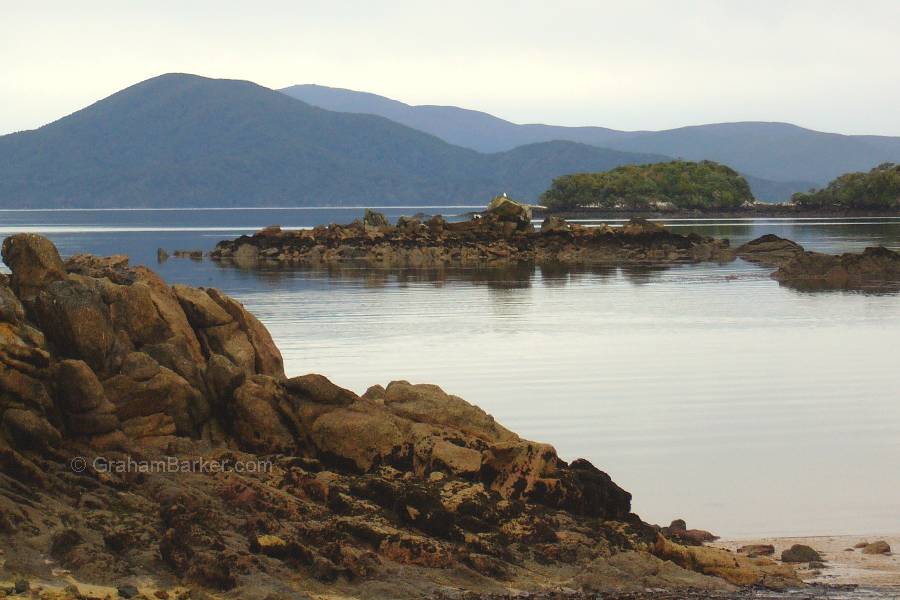 The man driving the boat gave us an introduction to Ulva Island, and left us with booklets showing the walk trails on the island and other points of interest. Then he was gone, leaving us alone to explore for ourselves ... a job made easy by the informative booklets and good signage.

We went our separate ways as different interests lured us. This worked well, allowing the stillness and tranquillity of the island to be better appreciated (tranquillity is easily drowned out by the noise of a group of chattering people). Using the maps provided, I chose the longer of the walking options and quickly became immersed in the natural environment.

On a beach which looked like it had only just been created, I spotted my first bird life, a native weka. I sat to watch it poking around in the wet sand, only to have it waddle right up to me for a closer look. On this island sanctuary, where introduced predators have been removed, I must have appeared as just a weird type of flightless bird rather than a threat. 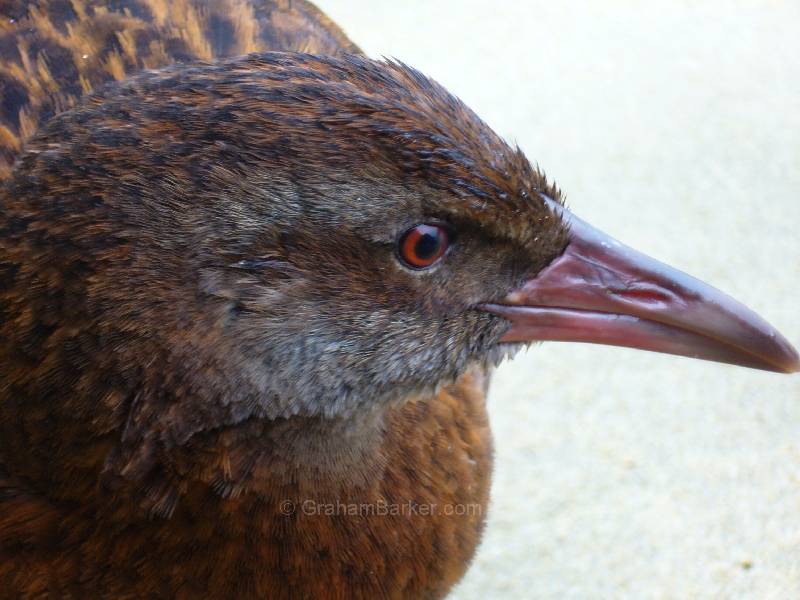 Apart from another friendly weka on the other side of the island, I didn't see any other birds close up ... but I could hear them. Ulva Island is home to Stewart Island robins, bellbirds, tuis, kakas, native parakeets, and many other birds who thrive in this island sanctuary. No other sounds disturbed the quietness of the island's forest. At times I almost felt as if I should take my shoes off to preserve the peace.

What I particularly remember was the incredible lushness of the native forest, which includes trees such as rimu, totara, kamahi, southern rata and miro. Virtually every surface felt damp and had stuff growing on it. One fallen log was covered in such a variety of growths one could easily not notice there was a log underneath it all. The clean freshness of the air loaded with subtle plant smells also sticks in my mind. 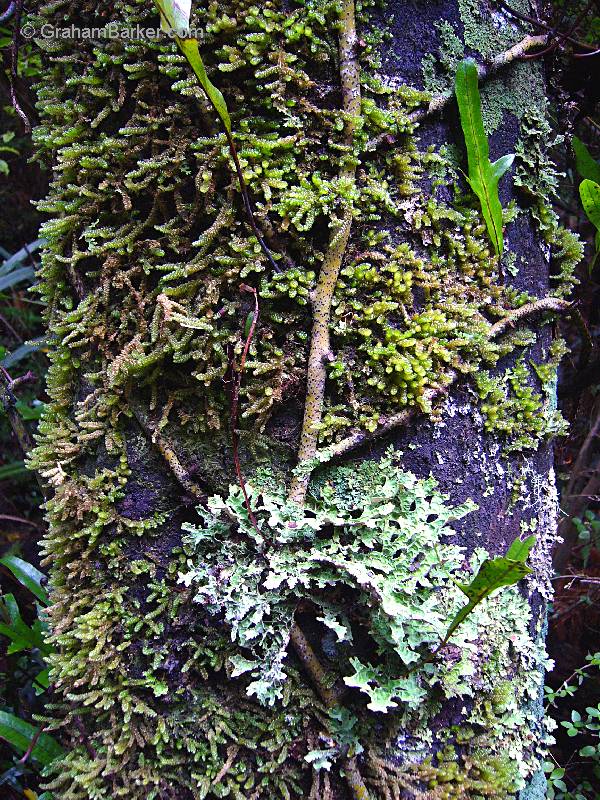 Stuff growing on a tree 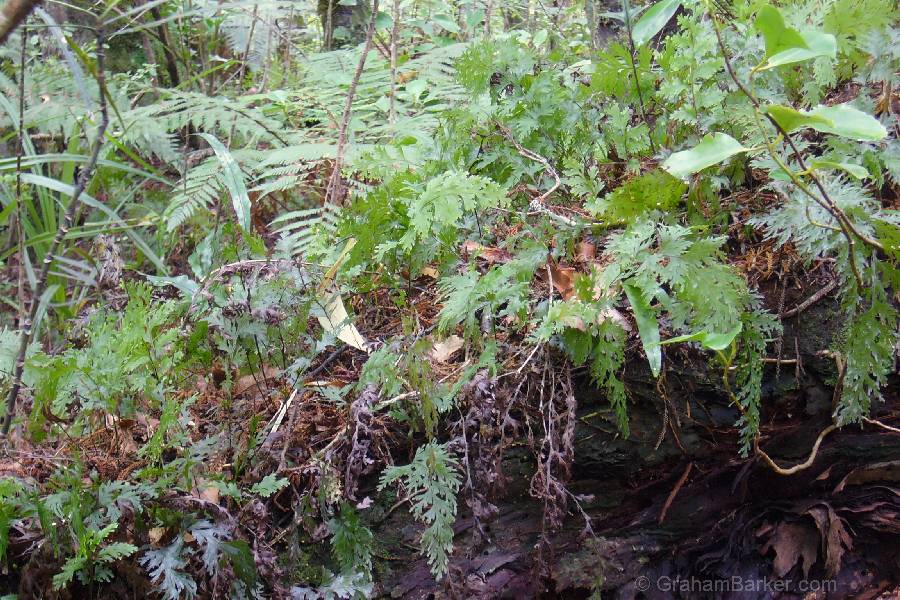 Somewhere under there is a dead tree

In a couple of places the tracks I followed took me to secluded beaches, each with charming views across Paterson Inlet towards other parts of Stewart Island. At one such place the cloud parted to reveal a snow-capped Mt Anglem - my first glimpse of the island's highest peak since I had arrived five days earlier.

After a few hours of soaking up the luxurious forest on this island haven, it was time to head back to the jetty for the short ride back to mainland Stewart Island. I probably didn't learn as much about Ulva Island as I would have done in a guided group, but on the other hand the do-it-yourself option using a water taxi was cheaper and allowed the solitude of the place to be better felt. Either option will let you experience a truly beautiful place.

If I were a specimen of endangered wildlife being released onto Ulva Island - which is what happens there - I can't imagine a nicer place for such a creature to establish a new life. 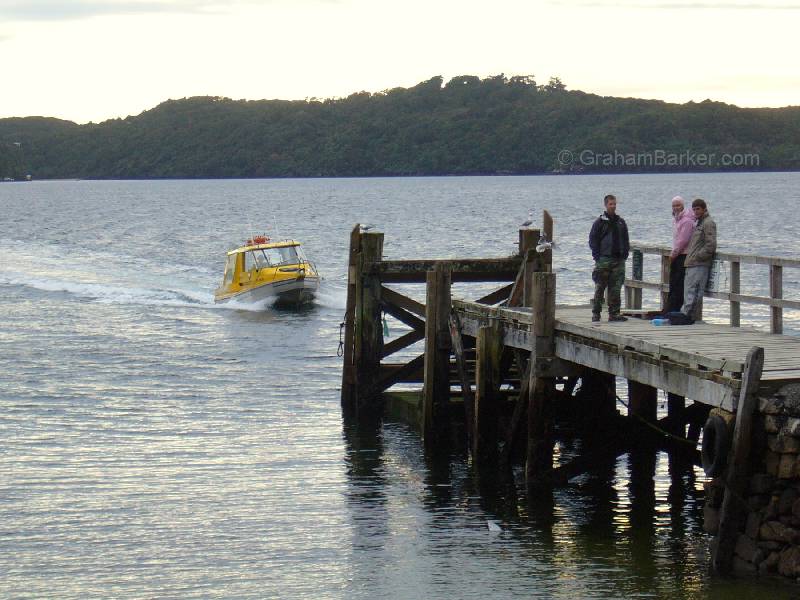 Coming to take us away - a Stewart Island water taxi

Ulva's Guided Walks - all about the organised tours by Ulva and her team
Ulva Island - more about the island, from the Stewart Island website 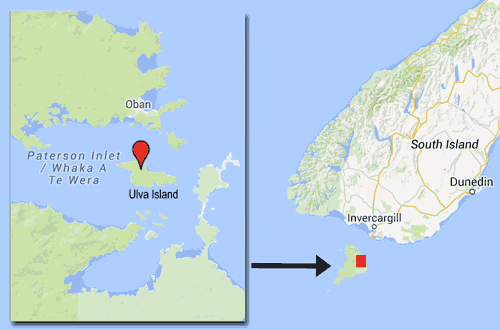