One of the things I enjoy about travelling in Australia and New Zealand are the small country towns. Despite some common features they are not all the same; many have their own unique character. One distinctive town is Waratah in the north west of Tasmania - an old mining town on the edge of the Tarkine wilderness.

Here are a few of the things I think are notable about Waratah, and which set it apart from other towns.

The setting - Waratah sits near the edge of a plateau about 600 metres above sea level. This may not be obvious when driving across the tableland into Waratah, but parts of the town have views down valleys which give a sense of this elevation. Other parts of the town, and the surrounding farm land, border onto rainforest belonging to the Tarkine wilderness.

Waterfall near the middle of town

The climate - once when I told someone in Tasmania that I was going to Waratah, the response was "you'll freeze up there". This reflects its reputation as one of the colder and wetter towns in Tasmania ... and yes, it was a little chilly. Thanks to the altitude, Waratah experiences snow a few times per year, and has cool summer temperatures on par with some of the mainland ski areas, except with more rain. It's not the coldest or highest inhabited land in Tasmania, but it’s one of the highest and coldest places that resemble a conventional town.

The waterfall in the main street. The Waratah river forms a lake in the middle of town, before plunging over the top edge of the plateau as a substantial waterfall … right next to the main road. What other town can claim a waterfall in the town centre? I can't think of any.

It is seldom visited - if you like visiting small towns which feel remote and relatively unaffected by tourism, then Waratah is one of the easiest to get to. Tourists on the well travelled route between the west coast and the north coast, or Cradle Mountain, tend not to make the detour to Waratah, even though it’s only a short detour from the main highway. The comparative trickle who do pass through Waratah are mostly on the way to Corinna or the Western Explorer road, not going to see the town. I’ve visited Waratah a couple of times in winter, and I'm quite sure I was the only visitor in town.

The mining history - Waratah burst into existence after tin was discovered in 1871 at Mt Bischoff, the mountain right on the edge of town. The population grew to a bustling 5000, and Waratah achieved a few distinctions:

The tin mine eventually closed in 1947, and Waratah dwindled to its present population of less than 250. However many relics remain of the town's mining history.

So what does a visitor do in Waratah? A good place to start is the Athenaeum Hall, a restored 1887 hall which served as a town hall among other things. These days it houses a great collection of historic photos which do a wonderful job of bringing to life the history of the area. It also includes the Tarkine Interpretation Centre, designed to whet appetites for the wilderness nearby.

Next door is the fully restored and operational stamper mill, once used for crushing tin ore. Also nearby is Philosopher Smith's Hut, a replica hut which shows the humble living conditions of the early pioneers. If you view it on a cold wet day (not hard to accomplish at Waratah), you get an appreciation of how different their idea of comfort was to ours.

From there you can take the "Town of Tin" walk and further explore the history. Or you can just do what I like to do - set off on a random walk, going where your fancy takes you and seeing what you can find. The main part of the town isn't large and much of it can be covered easily.

At a minimum, I would suggest following the main road from the Athenaeum Hall past the lake and waterfall to the old pub, or a bit further. This provides views of the waterfall, the valley it flows into, and a nice view of the town with the waterfall in it.

Not far from Waratah, on the road west, is a rainforest walk to the Philosopher Falls. This was closed when I visited, but sounds worth putting on my list for next time.

At the western edge of the plateau not far from town, is Whyte Hill Lookout. This provides great views over the hills and native forests of the Tarkine wilderness, often with clouds swirling above the trees and ridges. Nothing but nature ... except for the obligatory power line. For travellers detouring to Waratah for a quick look, this is a good place to turn back.

Beyond the lookout, the road descends steeply to the site of what was once the small town of Luina. The whole town has been removed and is quickly being reclaimed by the bush, although the streets can still be identified and explored on foot. Further on is the still-active iron ore mining settlement of Savage River, the main source of what little traffic is encountered out here.

Beyond Savage River, the road becomes narrow winding gravel and crosses remote woodlands and plains to reach the delights of Corinna and the Pieman River, which I've written about on other pages. But even if not venturing that far, the short detour into Waratah is something I'd recommend for anyone who can appreciate a town that is a little different. 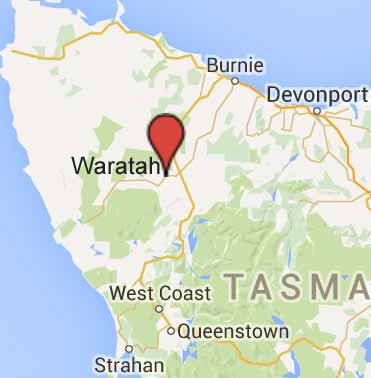 See footer for links to interactive maps
Short link for this page: rdu.pw/251