Warburton to Jamieson, road of serendipity in Victoria

If you're after a great back-road in Victoria, taking the scenic and historic high road between Warburton and Jamieson in Victoria is hard to beat.

Despite its remote mountainous nature, the road can be used as part of the journey between Melbourne and Mt Buller, Victoria's most popular ski area. Although you probably wouldn't want to do it in winter, as the higher gravel sections are prone to ice and snow. 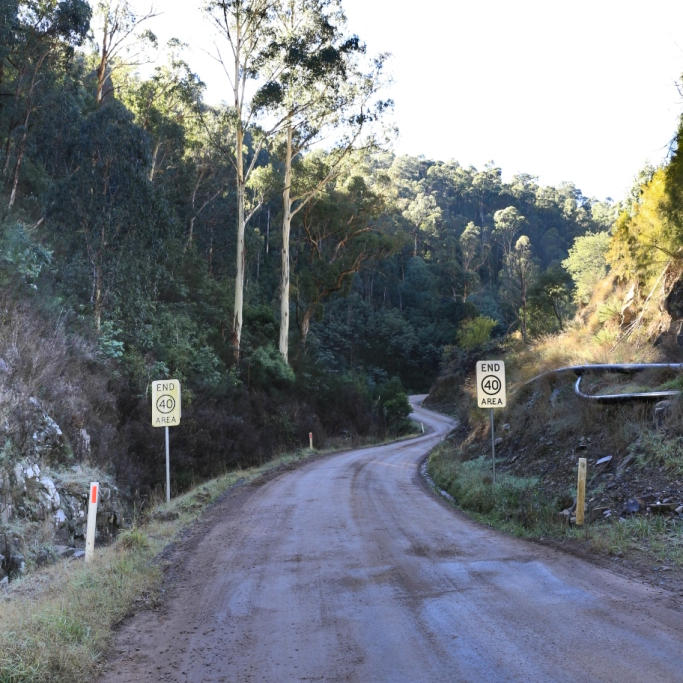 I drove the road in summer, when I was looking for a route to Mansfield and the Mt Buller area. The obvious and more direct way would have been the Maroondah Highway, but one thing I've learned from a lot of driving is that main highways are not usually the most scenic roads. Another line on the map caught my attention - narrow, winding, gravel, passing through abandoned mining settlements, mountains, and not much else. I couldn't resist the temptation of this road less travelled.

Leaving Melbourne's eastern suburbs via Lilydale, I passed up the Yarra valley to the town of Warburton, which is worth visiting for its bakery alone. I stocked up on scrumptious bakery products, using the excuse that the road ahead saw little traffic, and if I broke down it could be a long wait for help. Any other excuse would have done. 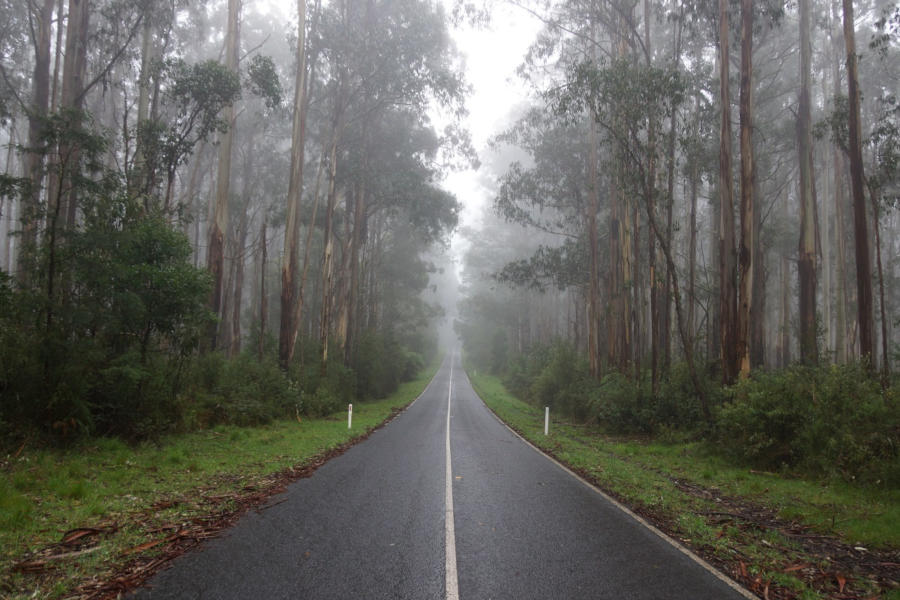 Early in the drive from Warburton. Photo: Adrian Millard

Beyond Warburton the traffic dwindled, and after the turnoff at Cambarville I had the road pretty much to myself. The road, now gravel, passed through impressive patches of Eucalyptus Regnans, known in these parts as mountain ash. These are the world's second tallest tree species, and are truly inspiring when people can resist the urge to chop them down.

Some delightful views of the surrounding mountains appeared at times, particularly from the cleared hilltop where the village of Matlock once stood. Further on, the road descended through the remains of towns which briefly thrived back in the gold rush days - Woods Point, A1 mine Settlement and Gaffneys Creek. Woods Point possesses a service station and petrol bowser (still operating) which look like they date back to when cars were a new invention. The historic feel of these little places made me feel as if I'd passed through a time warp. 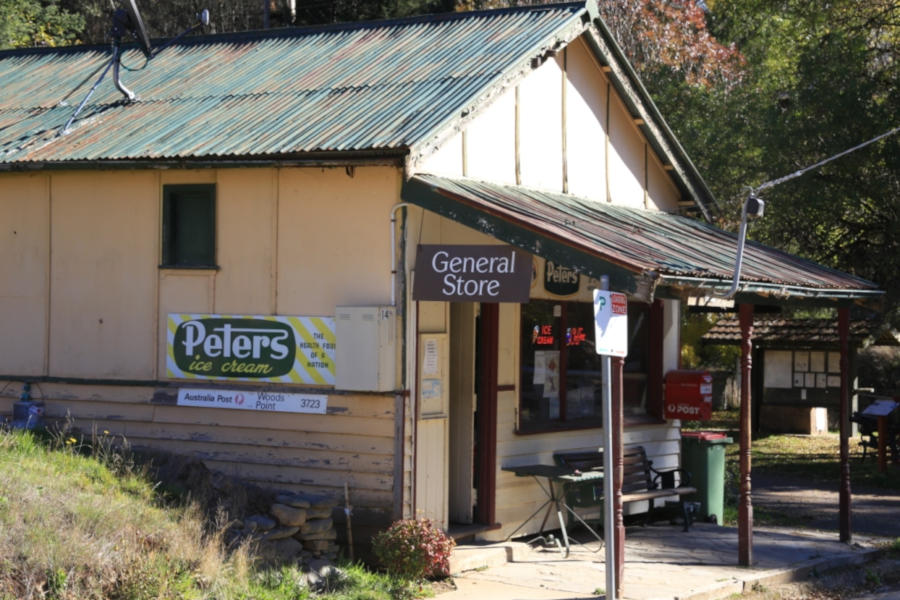 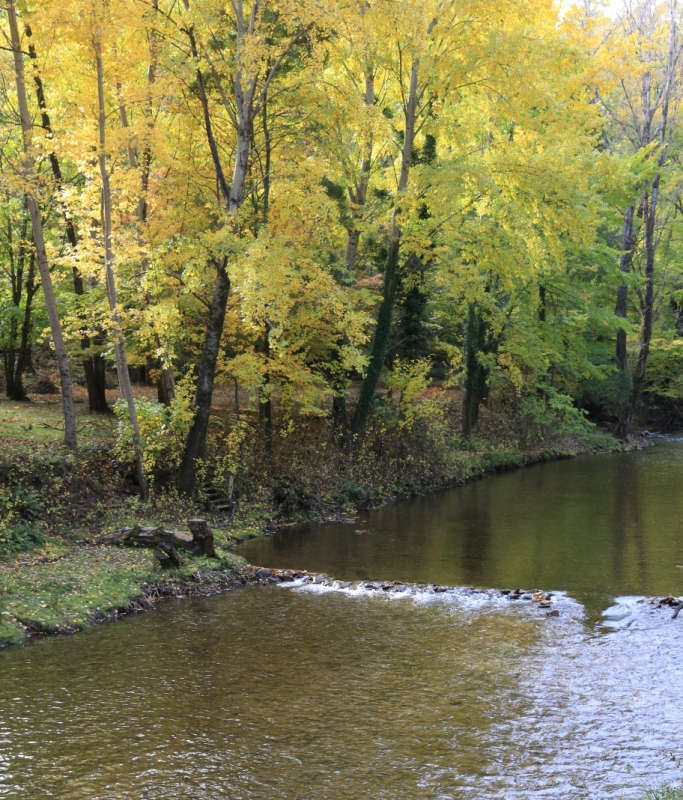 Further on, the road followed the Goulburn River and passed a number of very attractive riverside campsites - somewhere I hope to return some day in a campervan. Around Kevington the road improved, then it was a straightforward drive through Jamieson to Mansfield, the main service town for nearby Mt Buller. All up it took me around three and a half hours driving time (I think) from Melbourne, plus time for scenic stops.

It was a longer and more tiring way of driving to Mansfield than the highways, but I was enthused by the scenery, and felt as if I'd discovered another world. The downside was the steep and winding nature of much of the middle section - for a long while I thought I'd never get out of second or third gear. The never-ending bends could be uncomfortable for those prone to car-sickness, and the condition of the road in winter should be checked out beforehand.

But if the road conditions are okay, and you have the time to enjoy the scenery without rushing, discovering this road for yourself may be the great serendipity it was for me.

Note - I normally only use my own photos on this website, but I'm ashamed to admit that I carried no camera for my unexpected drive along this road (it was before I had a smartphone) and am grateful for those contributed. 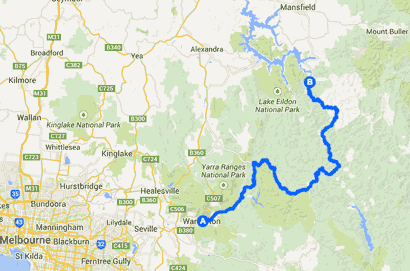 How great is Victoria's Great Alpine Road?
A road trip from Wangaratta to Bairnsdale through Victoria's best mountain scenery
Dining pleasure in suburban Melbourne - Maling Road
A charming street with a special ambience and some unique coffee and eating places
Omeo - history in the high country
A high country gold-rush town in Victoria, surrounded by mountains and scenic drives
Paradise Falls
A seasonal waterfall with an overhang, in north-east Victoria
Trees of Tarra Bulga National Park
A beautiful remnant of old growth mountain ash forest in South Gippsland
Toorongo Falls
Two waterfalls and a pleasant walk in mountain ash forest near Noojee, Victoria
Warburton to Jamieson: road of serendipity in Victoria
A slow gravel back-road with history and little traffic
Westgate Park
A Melbourne park with an unusual mixture of natural and industrial views
Back to Yackandandah
A small historic town in northeastern Victoria; a charming base for exploring the region