The bridge which the park is named after

Discordance and disharmony were two words springing to mind as I walked around Westgate Park in Melbourne. Bush environments create a pleasant oasis in this very industrial portion of the city, but reminders of the man-made world constantly intrude. The Westgate Bridge and freeway soaring almost overhead are just the most obvious. Despite the sometimes jarring juxtapositions - or maybe because of them - I'd recommend this as a walk in a park not quite like others.

Westgate Park sits near the eastern end of the Westgate Bridge, in the suburb of Port Melbourne. It was established in 1980, and since then many volunteers and Parks Victoria workers have been striving to rehabilitate the patch of land to its former glory. Restoring it precisely to its original state isn't possible, but by using plants indigenous to the local area they are creating habitats that are encouraging native wildlife to return. The bird life I heard on my visit suggests they have been successful.

There is parking at the park for those with their own transport. I was on foot, so I caught the 109 tram to Port Melbourne and walked the 3km each way to Westgate Park. The first part follows the foreshore footpath - a worthwhile walk in its own right - then after the Sandridge beach and life saving club the path turns "inland" and follows Todd Road almost directly to the park.

Entering the park felt a little eerie at first - probably the absence of people, a complete contrast to most of inner Melbourne. I did see a few joggers and cyclists later on, but the feeling that this park is under-used remained with me.

Something else didn't feel right. The native plants were lovely, the small lakes were attractive, and the sights and sounds of native bird life were a delight. All very natural and tranquil. And yet ...

Throughout the park, the sound of traffic whizzing past on the freeway overhead was inescapable. No matter how authentically natural the vegetation was, glimpses of the Westgate Bridge and freeway overpass were never far away ... or sightings of distant chimneys, dockside cranes, or factory buildings. When I came across a particular bushy scene that appeared almost wilderness-like, a passing container ship popped into view to shatter the illusion.

Parks in urban areas often contain a mixture of the natural and the man-made, but at Westgate Park the clash felt more intense; the contrast greater. The bush land, despite being replanted and interspersed with grass, appeared more natural and "real" than the bushy parts of most parks. Indeed, in places one could almost imagine being out in the bush, with the birdsong encouraging this feeling. However, the man-made elements were on a big scale and rather intrusive. To say the overhead freeway is imposing would be an understatement.

And for something different,
a disused railway bisects
part of Westgate Park

Despite the traffic noise and visual intrusion, I think the park works well as a natural refuge from the surrounding suburbs and industry. It is also a great testament to the efforts of those working to create such an oasis.

Not everyone would agree, but I found the traffic noise and in-your-face industrial views provided a positive point of difference to other urban parks. Once I got used to it, the noise and visual distractions served to emphasise, by contrast, the exquisite natural beauty of the native Australian plants and bird life. It certainly made for a walk in the park I'll remember more than your average garden-variety park.

A grassy knoll with good views of Westgate Bridge

Note - Westgate Park extends to the Yarra River, near where a sometimes-operating commuter ferry takes pedestrians and cyclists across the river to Spotswood, not far from the Spotswood train station. The ferry wasn't running when I was there, but if/when it is, it could enable a round trip circuit back to the city. This might suit walkers who like exploring parts of the city usually overlooked by visitors. 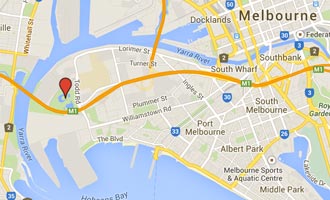 See footer for links to interactive maps
Short link for this page: rdu.pw/199