Sunsets at the Albany Wind Farm

Turbines at the Albany Wind Farm

The coastal wind farm near Albany attracts visitors; mainly to view the turbines. If you time your visit right, it can also be an excellent spot to view and photograph the sunset over a great stretch of unspoiled coastline.

I first checked the place out for the novelty of seeing big wind turbines, something we don't have many of here in Western Australia. The twelve tall towers and their gigantic blades, swishing round vigorously in the fresh onshore breezes, do make an impressive sight. There is a well made path with a lookout, so you can get a good look at the turbines and photograph them from different angles. Information plaques, signposts and a good car park make the site visitor friendly too.

It was as I was leaving that I noticed what makes the place special. The Bibbulmun Track, a long distance hiking trail between Perth and Albany, passes along the stretch of coast near the wind farm. In this area the coast comprises steep sand cliffs, so the track is in the form of a well made wooden boardwalk, high above the sea. A short path from the car park takes you to some steps down to this track, where magnificent views can be had.

Wooden railings, steps and the boardwalk, make accessible this coastal viewpoint which wouldn't otherwise get visited much. There is even a small lookout which is apparently a good place for spotting whales, between May and October. I haven't seen any here yet, but that just gives me more reason to return.

Because this bit of coast faces roughly south west, it has potential for good sunset views, depending on weather and the time of year. In summer, the sun dips to the horizon over Torbay Head in West Cape Howe National Park, the most southern part of Western Australia. Winter months see it set over more northerly land.

Looking southwest at dusk
- the edge of Torndirrup National Park

At any time of year the steep coastline in the opposite direction gets bathed in the pink glow of dusk, and isn't too bad on the eye. The light of the setting sun can also highlight any sea-spray mist, and the incoming lines of swell which batter the beaches. If you're in Albany and fancy watching the sun set, a better viewpoint would be hard to find.

The wind farm is reached on sealed roads by turning right from Frenchman Bay Road, towards the prison, which is also signposted. It is another example of a place which is worth visiting for reasons other than what most people visit it for. 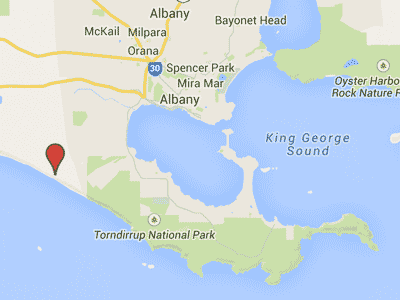 See footer for links to interactive maps
Short link for this page: rdu.pw/157