The uncrowded beauty of Flinders Island can delight the modern visitor, however its history contains a dark chapter. With mixed feelings I set off to visit the island's abandoned settlement of Wybalenna. That is where a remnant of Tasmania's original people - those who hadn't been eliminated or kidnapped - were exiled as part of a tragic process. One which nowadays might be described as genocide. 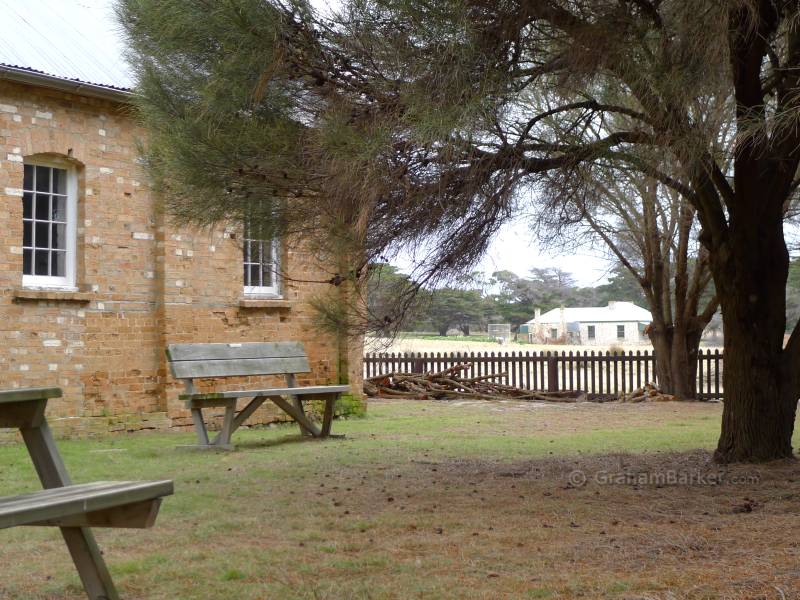 The first day I visited Wybalenna was suitably bleak. Sombre skies and a biting chilly wind fuelled the feeling of melancholy I felt while contemplating the fate of the Tasmanian Aboriginals on that spot. A proud and successful race virtually sent to die out, in a windswept valley on an island away from their home.

Allow me to set the scene. The Aboriginal peoples occupied every corner of Australia, including Tasmania, over 40000 years ago. They lived sustainably with well-developed culture for thousands of generations. Then along came white settlers who considered the land unoccupied, and wanted it for themselves. As with colonisation stories the world over, there was conflict between the newcomers and the natives.

In Tasmania, Aboriginal people were shot and their children stolen, with white casualties too. After a period in the 1820s known as the black wars, Governor Arthur implemented the "Black Line", whereby a line of men moved across Tasmania from one end to the other with the aim of driving what was left of the Aboriginals into two peninsulas. A bit like rounding up cattle, except that it didn't work.

To deal with the problem, George Augustus Robinson suggested protecting the remaining Aboriginal people by resettling them away from the mainland, with food, shelter and clothing provided. Mr Robinson was generally trusted by the Aboriginals, and from what I've read appeared to have had some good intentions ... when compared to his 19th century contemporaries. Even if some of his actions appear misguided in hindsight. 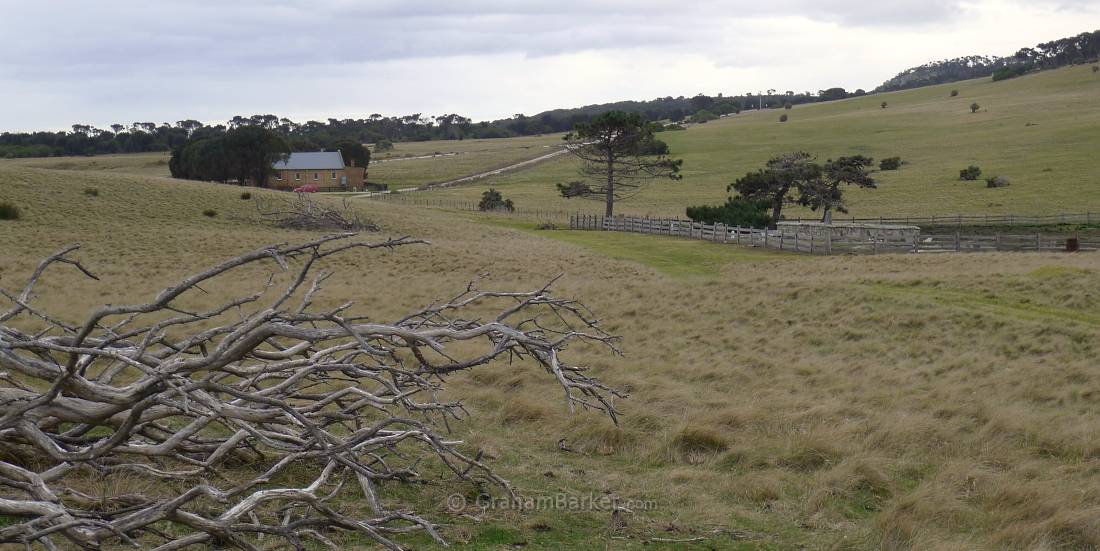 The valley where the Wybalenna settlement once stood

His plan proceeded, and by 1835 over 200 Aboriginal Tasmanians were moved - the last direct descendants of the original inhabitants. They were transferred to the west coast of Flinders Island, to a new settlement named Wybalenna - meaning "black man's houses".

There isn't much left of the settlement today. I wandered around the restored chapel and the small cemetery, having to imagine the living places and activities which once occupied the surrounding empty space.

The small chapel and its grounds serve as a monument to one of the stated intentions of the resettlement - to educate the natives and make them "like civilised people". Because they weren't thought of as civilised by the white people back then. 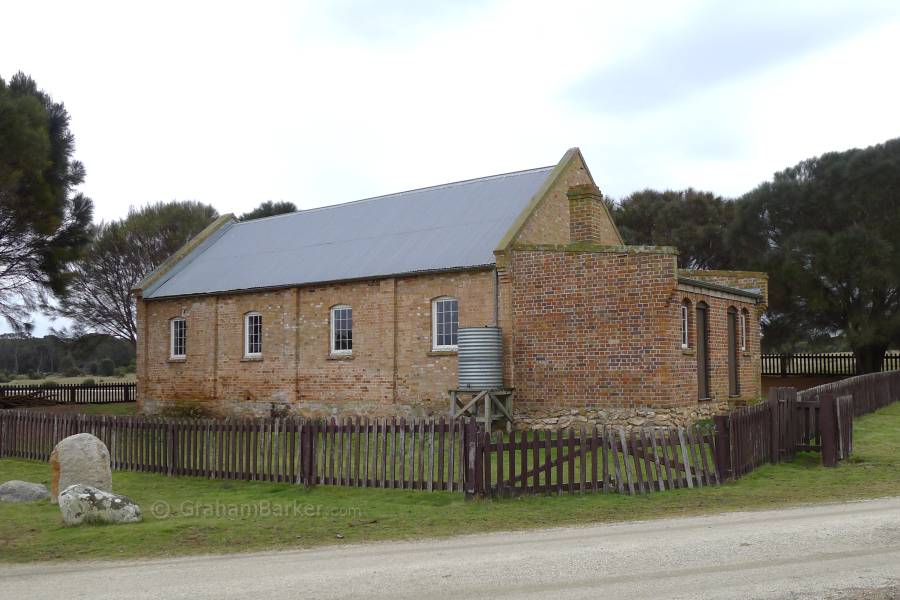 While education may have had some merit, trying to force the Aboriginal people into a European cultural mould didn't work. The lack of freedom, separation from their culture and removal from traditional homelands didn't do their mental health any good. Combine that with disease, poor shelter and inadequate rations, and by 1847 the were only 48 survivors left. Their reward was to be shipped to Oyster Cove near Hobart where they would eventually die out, after having had their children forcibly removed.

I wandered away from the chapel, to the gentle crest of a rise commanding extensive views across Bass Strait. On a clear day, parts of north-east Tasmania are visible from here. I reflected on how the resettled Aboriginals might have felt ... seeing visual reminders of the home they yearned for, but had been removed from, haunted by fresh memories of seeing their civilisation devastated. Even today we are only beginning to appreciate the depth of the connection the Aboriginal people feel with their traditional homelands. 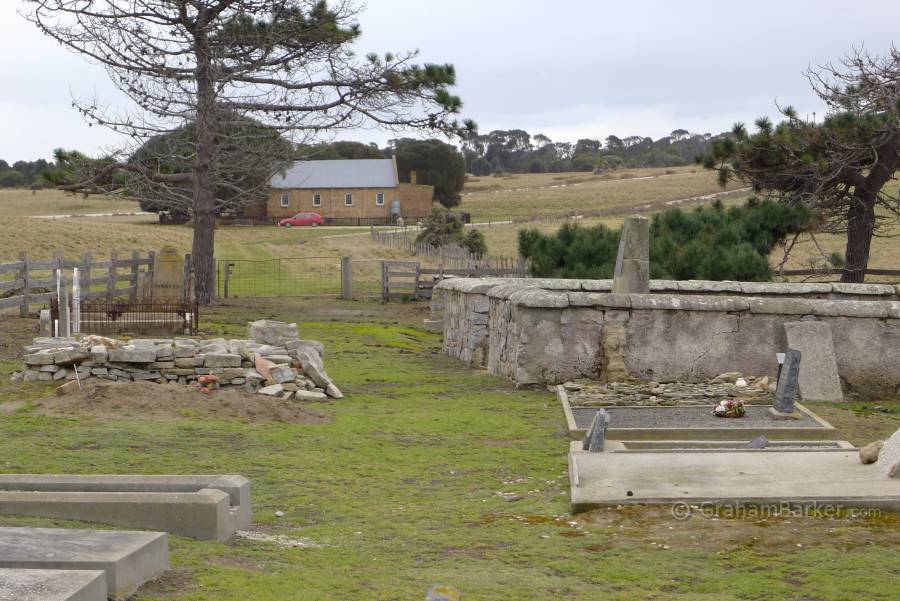 Back down the hill, I perused the small cemetery. There aren't many headstones, and I couldn't help noticing the names on them all had a European flavour. If most of the Aboriginal residents died here, where were they all buried? The answer came on a single plaque, which reads: 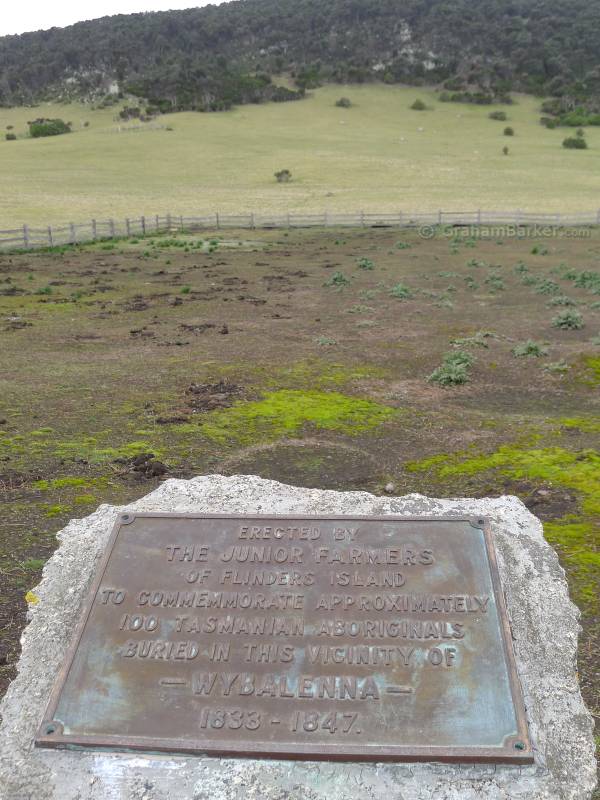 So a select few got proper graves, and the burial places of the Aboriginals - who the settlement was supposed to exist for - were somewhere "in the vicinity", unmarked and unacknowledged. For me this summed up very well the level of respect given to the Aboriginal people.

I passed nearby on another day and paid Wybalenna a second visit. The weather was more bright and cheerful, as it had been for most of my stay on the island. Yet the location still felt bleak. It's not an unattractive spot, but knowing its role in the mistreatment of Australia's original inhabitants somehow taints it.

Despite the dark aspect, I'd still recommend a visit to Wybalenna for anyone travelling to Flinders Island. What remains of the settlement gives an insight into an aspect of our history which for too long was swept under the carpet. This, and the low-key seldom-visited nature of the place, make it very different from any other historic site in Tasmania.

Wybalenna (Companion to Tasmanian History) - history of the settlement 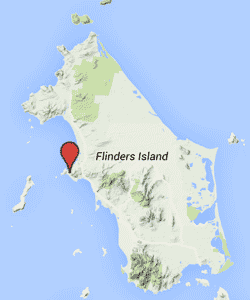