If I mention to someone that one of my favourite ski areas in New Zealand is Rainbow Valley, the normal response is 'Where's that?'. Even among skiers in New Zealand it isn't widely known. With around twenty ski areas in the south island it's not surprising that the smaller ones can slip under the radar, especially one like Rainbow which isn't near any large town. For anyone who likes ski slopes to be relaxed, friendly and uncrowded, this obscurity is a blessing. 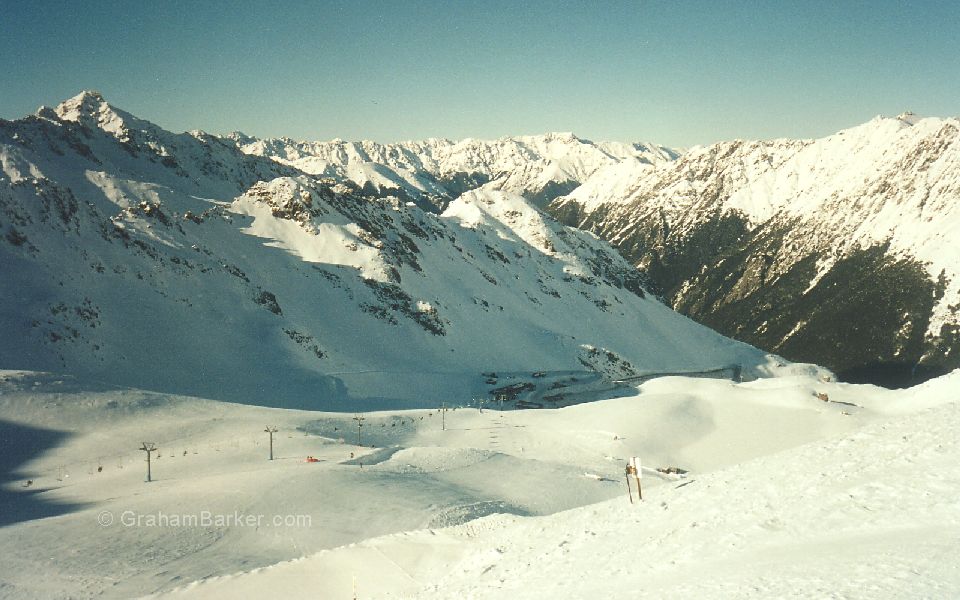 Looking down-valley from the top of the Rainbow ski area

It was the lack of crowds combined with "proper" ski lifts which attracted me to Rainbow. New Zealand has many small ski areas run by ski clubs - these are known for their low-key friendly atmospheres, but have the disadvantage of depending on rope tows to drag skiers up the hill. I tried these, but attaching myself to a fast-moving cable using a device known as a nutcracker was a skill I never mastered. For many, this can hinder the enjoyment of ski areas which are otherwise awesome.

All the big ski areas have lifts which are far more user-friendly, such as chairlifts and T-bars, however they are also more crowded. What I had read made Rainbow Valley sound like the best of both worlds - sparsely populated slopes and friendly atmosphere, but without having to struggle with rope tows. Could it be that good?

I first visited Rainbow by car from the nearby tiny village of St Arnaud. The only other main towns within reasonable driving distance are Picton, Blenheim, Nelson and Murchison. These are an average of 90 minutes drive away, which helps explain why I didn't see much traffic. Just as well ... the gravel road leading towards Rainbow fords some small streams, and I lost traction a few times on icy patches when driving out of them. It was good not to have any traffic near me. 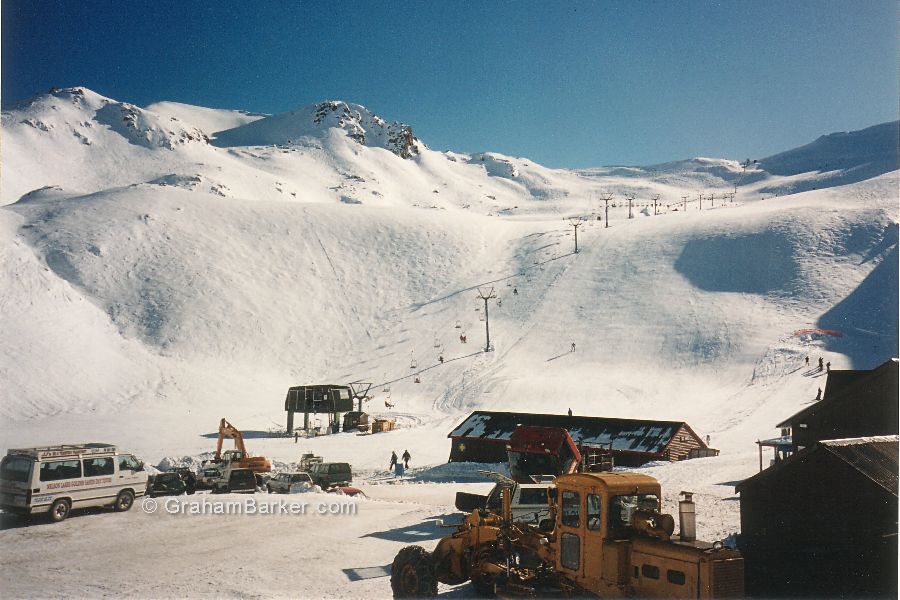 From Rainbow's carpark and base

Skiing at Rainbow Valley turned out to be as good as I had hoped. Not having to queue for a ticket or to get on the chairlift was a delightful way to start. The main slopes were groomed beautifully, the scenery lovely, and there was plenty of room to move. I quickly became hooked.

Near the top of the main lift, the trail skirts the top of a ridge with a panoramic view. On one side is the ski area, and on the other is a view across Lake Rotoiti and St Arnaud towards the mountains of the south island's north-west. I enjoyed many rest stops soaking up this view, and was reminded that being in the mountains was as much a part of my enjoyment of skiing as the sport itself.

The vertical drop at Rainbow isn't great (218m), but the main slope is excellent for learning and perfecting skiing skills without being distracted by obstacles, sudden steep bits or other people getting in the way. Others agreed with me that it was a good place for lessons - cheaper than at the big resorts, with more room to practice undisturbed. 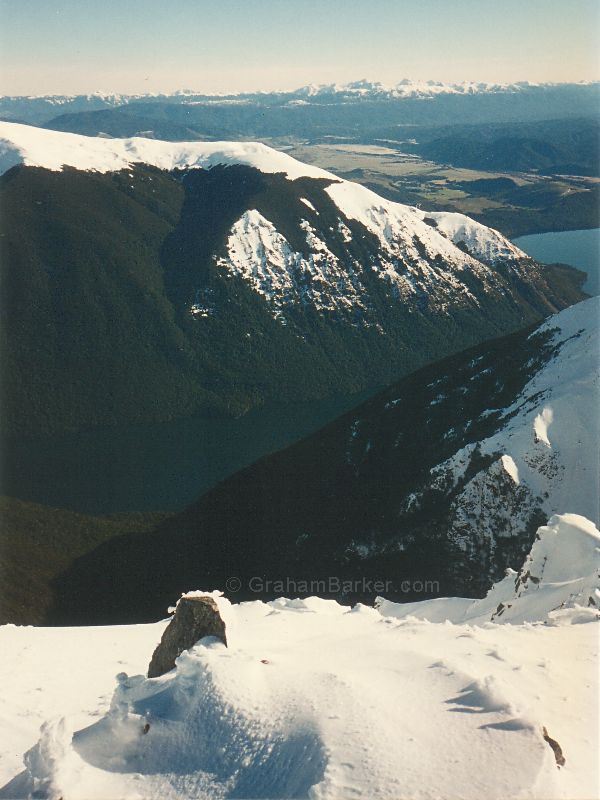 Later in my holiday I returned to St Arnaud for a longer stay, and travelled to Rainbow on a daily bus which came from Nelson and did pick-ups on the way. With more time, I got to experience Rainbow in a variety of weather conditions ranging from perfect to disgusting, and it was all enjoyable. Well, the disgusting weather was maybe only just enjoyable, but the slopes at Rainbow do seem to be sheltered from the worst of it.

A spin-off of spending time at Rainbow was that I got to know some of the staff and regulars. It's that sort of place - the small numbers (of both staff and visitors) and laid-back atmosphere make skiing there a more friendly experience than at the major resorts. It can be a little more crowded on sunny weekends or holidays, but nothing like Mt Hutt or the Queenstown ski spots.

Another thing I noticed was the lack of overseas visitors - of all the people I spoke to on the chairlift and in the small cafe, none were from further away than a two hour drive. Some of the staff were seasonal workers from overseas, but otherwise it was a very local-flavoured kiwi experience. 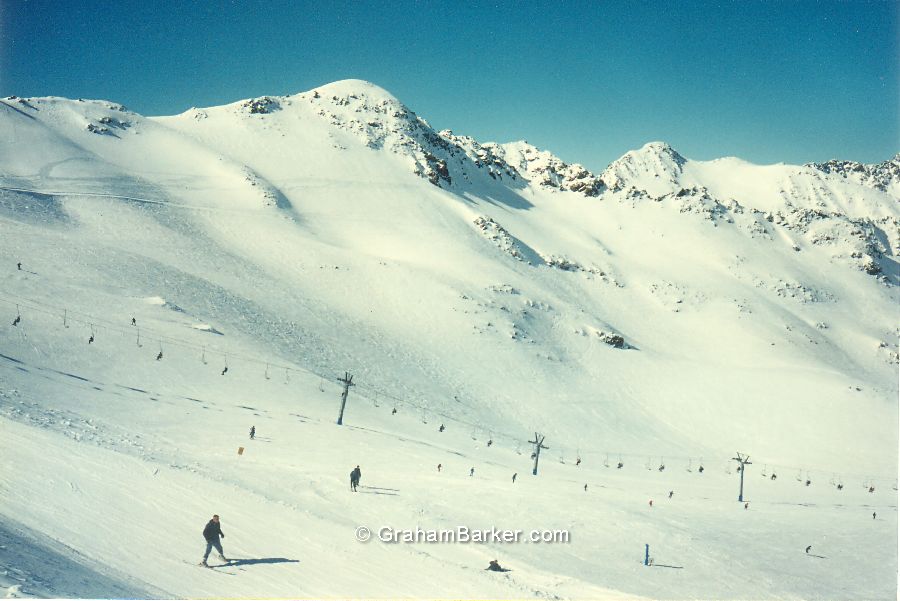 I mentioned a chairlift ... but sadly that chairlift is no longer there. Rainbow originally had a rope tow as its main lift, then purchased the chairlift from Lake Tekapo when that ski area closed down (it has since reopened). After some bad seasons Rainbow closed down in 2002 and sold the chairlift to the Lake Ohau ski area. Money was raised and Rainbow reopened in 2004, but with a cheaper T-bar where the chairlift used to be. Such are the ups and downs of small ski areas.

The photos and video on this page show the chairlift because they were shot before its removal - a T-bar now occupies the same spot. But you never know: the Rainbow Sports Club, which owns the ski area, is running it successfully and planning another T-bar ... and maybe one day a chairlift will return.

Whatever the lifts in use, I would recommend Rainbow to any skier or snowboarder who is not deterred by a small vertical drop, and who wants to experience the uncrowded pleasures of a club field without the inconveniences of rope tows. If I could only ski two places in New Zealand, Rainbow would be one of them. 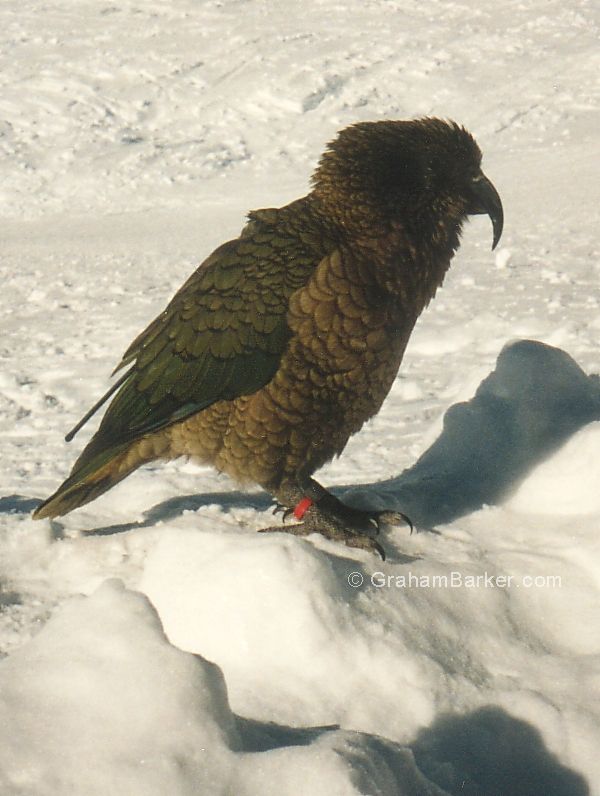 A kea: these alpine parrots are regulars at NZ's ski areas

This video gives a taste of the Rainbow Valley ski area in New Zealand, back in the days it had a chairlift. Music: Delusional by Leon Ayers Jr. 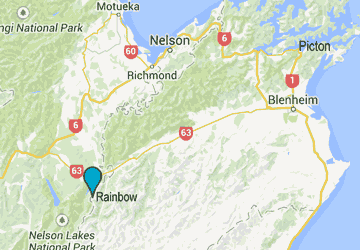