A cliff near the start of the cruise

If speeding in a fast boat along the towering sea cliffs and rugged wildlife-infested coastline of a Tasmanian island appeals to you, then there is a boat trip I can recommend. It is a cruise along the impressive southern half of Bruny Island, just off the coast of Tasmania south of Hobart. Not many tourist excursions inspire me to open my wallet and part with a chunk of money, but this one did, and it lived up to some high expectations.

I first saw the Bruny Island Cruises trip showcased on a TV travel show many years ago - I think it was Great Outdoors. It showed a small boat zipping among high cliffs, narrow channels, beside dramatic dolerite columns poking up out of the sea, and then more placidly alongside seals and other wildlife. To a scenery junkie like me it was inspirational stuff. I don't go on many paid tours, but this one looked outstanding. I had to do it.

About to pass The Monument

Some years later when I next arrived in Tasmania, Bruny Island was my first port of call. It is only one to two hours from Hobart - depending on how long you have to wait for the vehicle ferry - but it feels like a different world. My first full day there dawned crisp and sunny with little wind, so I headed straight to Adventure Bay, where the daily boat trips leave from.

There is a cafe within the building where you buy tickets and assemble for the cruises. Just as I arrived, some home-made blueberry muffins popped out of the oven, and the aroma was too much to resist. Knowing there was a toilet on the boat meant I didn't need to limit my intake, so muffins and coffee provided a good start to the trip.

Once all passengers had gathered, we were briefed and issued with lightweight waterproof jackets to protect us from the wind and sea spray. These proved necessary and very effective, especially when bouncing over big waves on the high speed return journey. We were also offered some very good advice: anyone concerned about motion sickness should sit towards the back of the boat because, at speed, the front end goes up and down a lot more. I should have paid more attention to this.

A sea cave open at both ends

We set off from Adventure Bay in gorgeously clear winter weather, rounding the nearby point to follow the east coast of Bruny Island. It wasn't long before we felt dwarfed and awe-struck at the foot of some of the highest sea cliffs in Australia. The guy driving the boat was justifiably proud of the natural beauty in his back yard, and frequently stopped so we could take it all in. He thoughtfully turned the boat around so people on either side had a turn at getting a clear view.

It isn't just cliffs - the spectacular coastline has some impressively rugged rock formations, such as the massive tower of dolerite known as The Monument. The boat sped through the small channel between column and cliff in the same way that jetboats in New Zealand rush closely past obstacles without hitting them ... just. Other narrow channels were explored, a sea cave was entered, and we felt the breath of Breathing Rock (a sort of blowhole). I sat out in the open, a few rows back from the front of the boat, and the views were exhilarating.

A community of cormorants, South Bruny

At the southern end of Bruny Island are some small islands hosting colonies of seals, and the boat took us in for a close look. Scenery may have taken centre stage during the run down the coast, but the teeming wildlife competed well for attention. Plenty of birds swarmed, dolphins frolicked, and it became clear that this wilderness was far from deserted - it is highly populated, just not with humans.

On a clear day, views from the end of Bruny Island extend to the southern tip of mainland Tasmania and its mountains. As I gazed across the icy waters to a vista of forested mountains, some with snow, I thought how far the view differed from the stereotyped image of Australia as a hot, flat, sunburned country. Much of it is, which makes me value the bits that aren't.

The return to Adventure Bay followed the outward route, sort of. On my trip the boat stayed further offshore, providing a different perspective of Bruny Island. Opportunities to spot more wildlife were taken advantage of by the driver, who frequently opened the throttle in pursuit of targets such as sea eagles and a wandering albatross.

Another cruise boat between islands

We followed an albatross briefly - to see its immense wingspan gliding effortlessly just centimetres above the waves without apparent effort was worth seeing from close up. Another diversion was to watch a flock of gannets enjoying a feeding frenzy. I'd seen TV footage of these circling birds suddenly diving vertically into the see and emerging with a fish, but to see it in the flesh from close range was something else.

At high speed in the open sea I questioned my decision to sit in the front half of the boat. It was exhilarating and the views were fantastic, and the ginger tablets handed out by the crew at the beginning seemed to be effective against motion sickness. However it was my back which didn't take kindly to the exaggerated up and down motion; in particular the sudden landing after leaping over a big wave. Those with a delicate spine might be more comfortable towards the rear of the boat.

Upon returning to Adventure Bay, I enjoyed a lunch of pumpkin soup in the cruise company's beachside cafe along with many other passengers. It was a pleasant way to debrief and reflect on the three hour cruise which we all agreed had been excellent, and which I would thoroughly recommend to anyone. The provision of lightweight waterproof jackets mean you don't need to bring special clothing, and the ginger tablets and on-board toilet also make the journey more comfortable.

If you don't have your own means of driving to Bruny Island, or you have a rental vehicle with conditions that prohibit going there, then a day trip from Hobart can be taken which includes the cruise. I would encourage booking ahead - I did the trip in the winter off season and two boats were nearly filled. It is very popular, being awarded "Tasmania's Best Tourist Attraction" many times, and also voted one of the "Greatest 100 Trips of the World". Having done it myself I can understand why.

Bruny Island Cruises - heaps of information about the boat trips 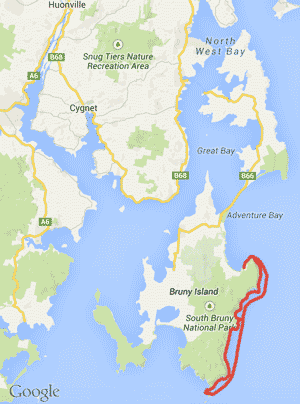 See footer for links to interactive maps
Short link for this page: rdu.pw/182