Australia has some weird and wonderful place names, and investigating colourfully-named locations can be a great excuse for wandering off the main roads. I've done this in Tasmania, which has its fair share of odd and quaint labels.

Names like Fern Tree or Flowery Gully are straightforward, as they describe what you'll find there. I didn't spot the hollow tree which I assume Hollow Tree was named after, but I did see a very large penguin at the town of Penguin.

Some names are alluring, almost begging to be visited. Are the localities of Paradise, Plenty and Promised Land as attractive as they sound? They looked pretty good to me, as they obviously did for those who named them. Is Adventure Bay as much fun as the name suggests? How would you feel in Snug? I did feel snug in the town of Snug, but didn't find much adventure in Adventure Bay ... which was named after a ship. 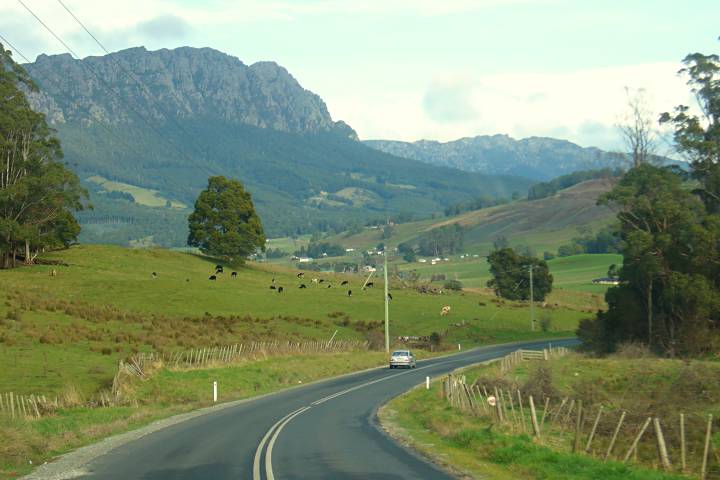 Other names may arouse curiosity. What have the people at Detention Point been up to? How much suffering really goes on at Cramps Bay? Some names have historical explanations - Eggs and Bacon Bay might be where Lady Jane Franklin (18th century governor's wife) once either ordered or was served eggs and bacon. But how Nowhere Else got its name is something I've yet to learn. And why was a small flat island named The Carbuncle when it looks nothing like a cluster of boils?

A favourite of mine is Flowerpot, a rural community on the coast south of Hobart. I love the quaintness of the name, and find it amusing to think that some people are able to say "I live in Flowerpot". The drive through the area was very enjoyable, but gave no obvious reason for the name. Perhaps I'll stop and ask someone about it on my next trip ... as well as locating Garden of Eden. I've not found it on a map, but I'm told it's somewhere near Paradise and Promised Land.