Back in the old days before the Bibbulmun Track, one of the main south coast walks near Walpole was the Nuyts wilderness track. With the Bibbulmun now getting most attention, the Nuyts track has become less used and overgrown, in keeping with its wilderness status. For anyone prepared for a little scrub bashing and happy to look out for snakes, this track is a rewarding way to access secluded coves and some awesome coastline on a long day-walk. 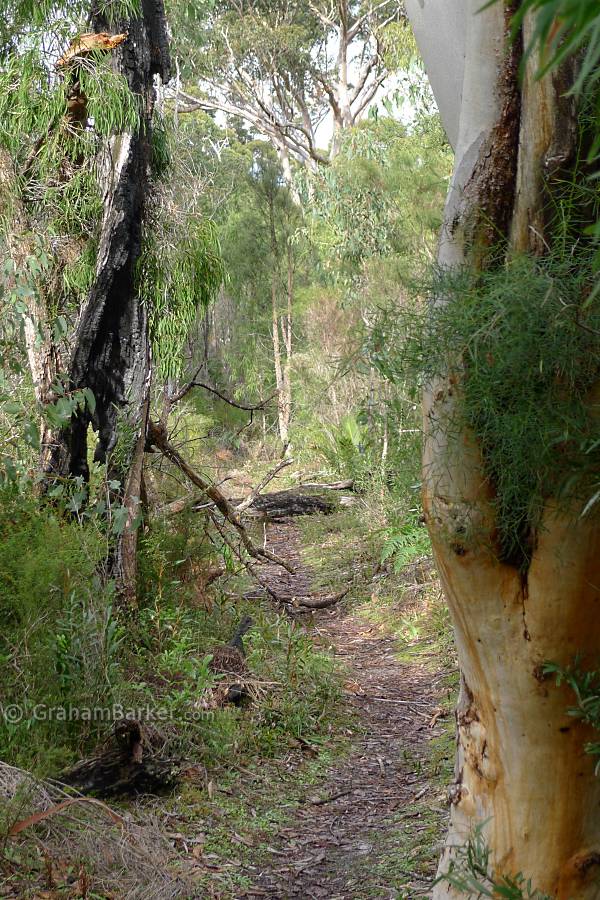 Track near the Deep River

I first walked the track into the Nuyts Wilderness in 1995, camping overnight at Thompson's Cove. This trip was memorable not so much for the walk, as lovely as it was, but for what became my most frightening encounter with a venomous snake.

On the return leg I stumbled across an adult tiger snake, on the track right in front of me with head raised and neck flattened in an aggressive striking pose. The fangs and seriously angry look on its face are seared into my memory. It was close enough to easily bite me, had it chosen to. I leapt backwards faster than I would have thought possible, and the snake eventually slid under a bush.

Having to then pass that bush in order to leave the area prompted me to ponder the risks of hiking alone in snake-rich habitats. I still hike alone - very carefully and only in the cooler months - but despite subsequent visits to Walpole I avoided the Nuyts track. 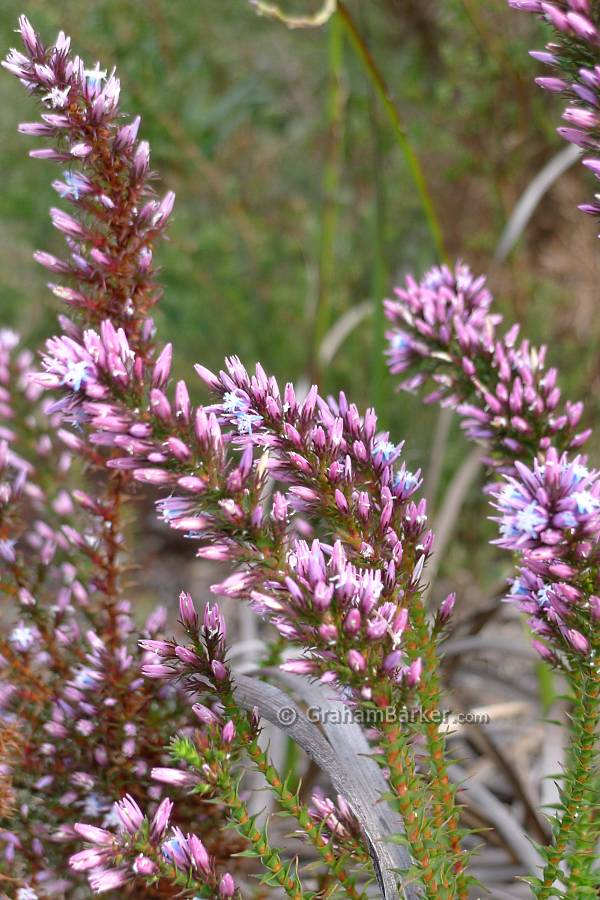 On a more recent stay in Walpole I fancied seeing Thompson's Cove again. It was the middle of winter, when snake encounters are least likely (though not impossible) - if I didn't walk the track now, I probably never would. So I did.

The trailhead is on Tinglewood Drive, a gravel road west of Walpole. After crossing a swing bridge over the Deep River, the walk follows the Bibbulmun Track for about three kilometres through karri and marri forest then into more open woodland and coastal heath. Fairly normal by Bibbulmun standards, and quite pleasant.

Just after a boot scrubbing station (to reduce transfer of dieback disease), a junction is reached where The Bibbulmun Track branches off to the right. The Nuyts track to Thompson's Cove and Aldridge Cove continues ahead, following what was once a four-wheel-drive track. Back in 1995 it was relatively clear, but since then much regrowing has occurred. This suits the wilderness values of the area: minimal maintenance and signage, and no facilities of any kind. 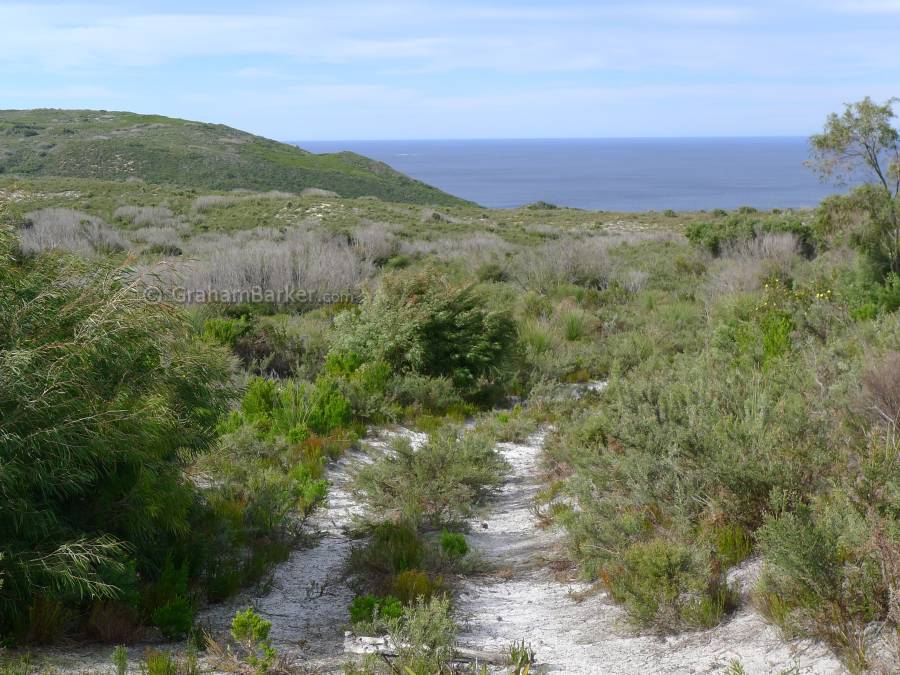 Descending to the coast

Beyond the Bibbulmun, the two wheel ruts were still easily distinguishable - following the route is not a problem - but it was impossible to walk without brushing against shrubs and low foliage. Some of it prickly. I wore shorts and paid the price with badly scratched and prickled legs, plus a bonus bush tick - definitely long pants next time!

The track meanders for another three kilometres, gradually ascending until the ocean comes into view, then gradually descending. I don't think I've ever appreciated the beauty of coastal heath as much as I did on this bit of track. The plant variety is beautiful when you really look at it, and even outside of wildflower season there was plenty of colour. Cheerful birdsong completed the ambience, and groves of peppermint trees provided occasional shade. 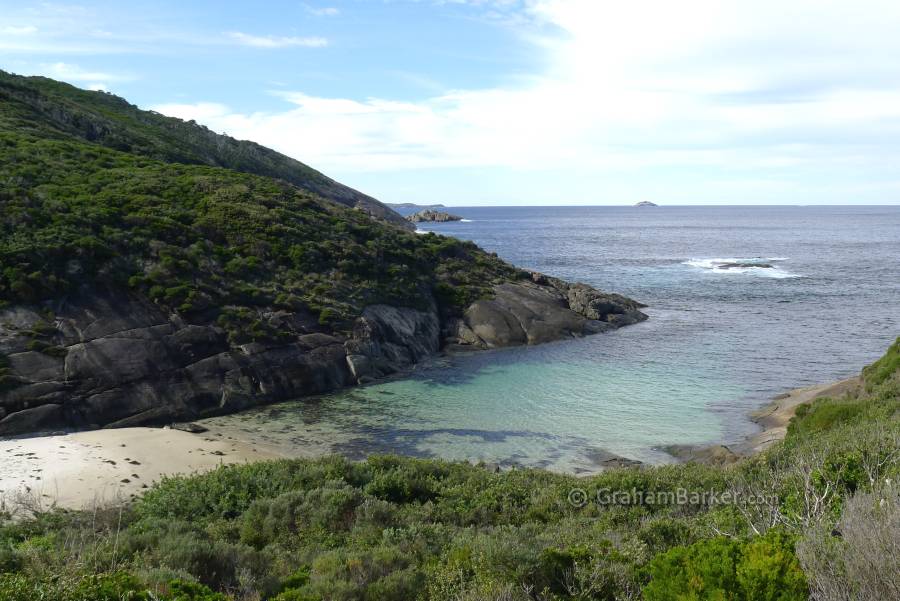 When the coast is neared, a signposted side track leads left down to Thompson's Cove. I took this track, and for the next twenty minutes or so battled a barely-there route through thick scrub down a gully leading to the cove. Finally, with scratches on my arms competing with those on the legs, I emerged tired and sweaty but triumphant onto an idyllic beach.

Thompson's Cove is small; a secluded wedge of beach enclosed in a gully between giant headlands. With a stream of refreshing clear water gurgling its way around mossy boulders across sand to the sea. If you want to feel hidden away in a piece of isolated coast untouched by humans, this is a perfect spot. It was on this beach that I camped years ago, not noticing that the tiny flat space amid peppermint trees about 15 minutes before the cove was the designated camping area. 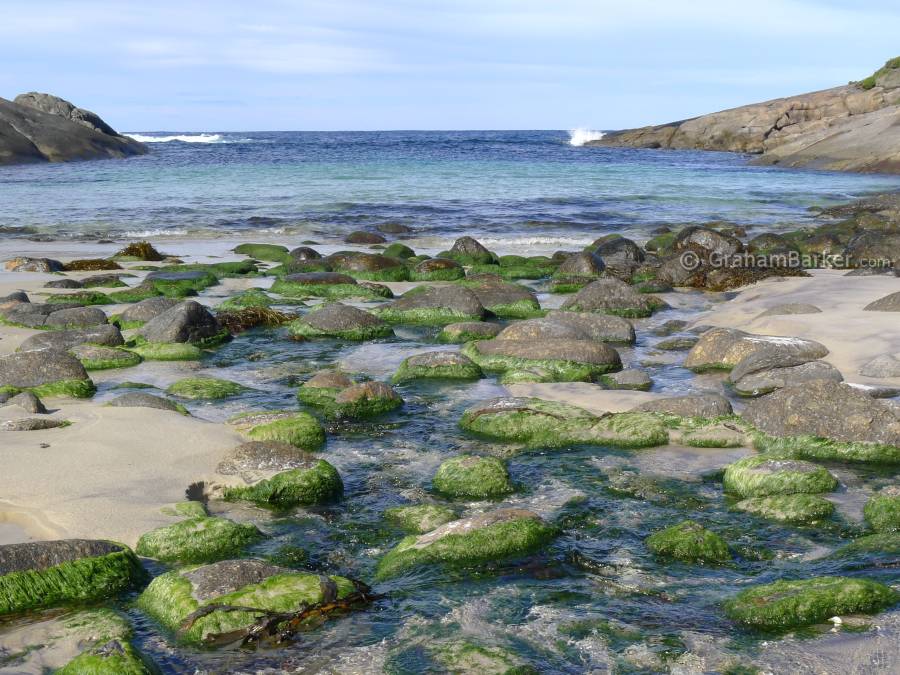 From the beach at Thompson's Cove

I returned puffing and sweating back up the gully to the main track, then continued left towards Aldridge Cove. From here the old four-wheel-drive track became even more overgrown. Soon Aldridge Cove came into view, together with the ruggedly imposing Point Nuyts.

The path continues steeply down to the beach at the back of Aldridge Cove, but I didn't go that far. A large area of elevated rock provides a grandstand view of the cove and the surrounding coastline, making the descent to the beach unnecessary if you are only there for the view and not for camping or swimming. This is in contrast to Thompson's Cove, where there is little view until you reach the beach itself. 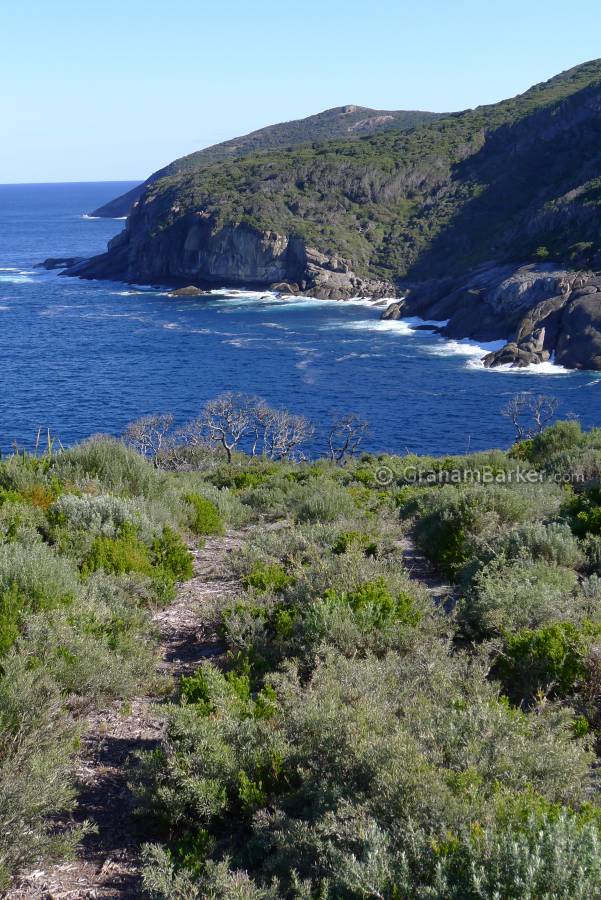 The overgrown track and Point Nuyts

I sat absorbing the view for some time, enjoying not only the isolated splendour of the scene, but also the fact that I had it all to myself. Apart from the two whales I noticed spouting and frolicking offshore. Magic!

The walk back to the trailhead was straightforward. All the walking on sand - even firm sand - made the distance feel further than it was for someone not used to that surface. From the trailhead to Thompson's Cove is 14km return; the extra walk to the rocks overlooking Aldridge Cove make it more like 15 or 16km return.

I was very sore and tired at the end, but in the satisfying way that comes from healthy exercise in a glorious natural environment. The overgrown paths heightened the sense of achievement and the feeling of being off the beaten track - literally. As for snakes ... not the sight or sound of a single one. They are far less active in mid-winter, but the encounter I described earlier was on a cold day in late May, so one can't be too complacent at any time of year.

For anyone thinking of doing this walk, may I suggest a few things. Definitely wear long trousers to protect against prickly vegetation and ticks. Carry lots of water. Keep a sharp eye out for snakes. Also wear hiking boots or gaiters to protect against bites from snakes hidden in the undergrowth on the track. They usually won't bite unless cornered, but being prepared will give you more confidence to enjoy the walk.

If steep descents or scrub-choked gullies don't float your boat, or time is limited, the walk can be shortened by avoiding the Thompson's Cove track and ending at the rocks overlooking Aldridge Cove. This allows great views along the coast and enables you to experience most of what makes the Nuyts wilderness track a very special walk on the wild side. 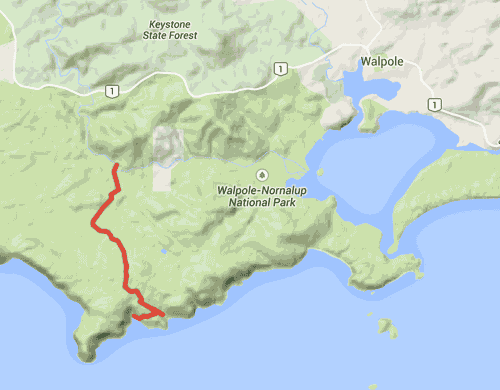