The Stirling Range in the south of WA is an impressive collection of mountains rising abruptly from the surrounding flatness. It can be visited in day trips from Albany, or smaller towns within an hour drive. But to really soak in the environment I can recommend staying at the Stirling Range Retreat, near the highest peak in southern WA. 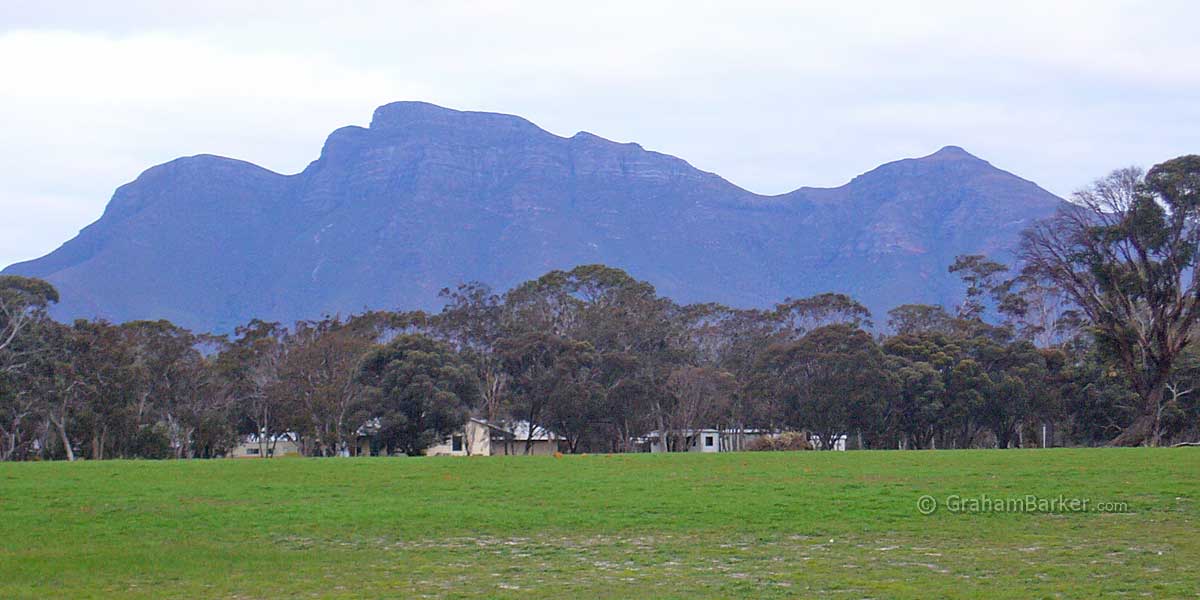 The retreat is scattered within a bush block adjoining the northern boundary of the Stirling Range National Park. It began as a place for glider pilots to camp: the neighbouring farm has a grass airstrip, and winds rising over the ridges provide great gliding opportunities when the weather is right.

This grew into a caravan park, and under the ownership and care of Tony and Aylene Sands it has blossomed into an eco-retreat. Which in this case is a fancy name for a caravan park with special emphasis on appreciating and looking after the unique natural environment of the Stirling Range.

There is a variety of accommodation on offer. I first stayed there in 1992 in a rammed earth cabin; this was the first time I experienced snow on the summit of Bluff Knoll. On the rare occasions when snow falls on the Stirlings' summits, it doesn't survive for long - and so the sooner you can climb up, the better. Staying close by gave me an advantage over those who had to drive from further away. 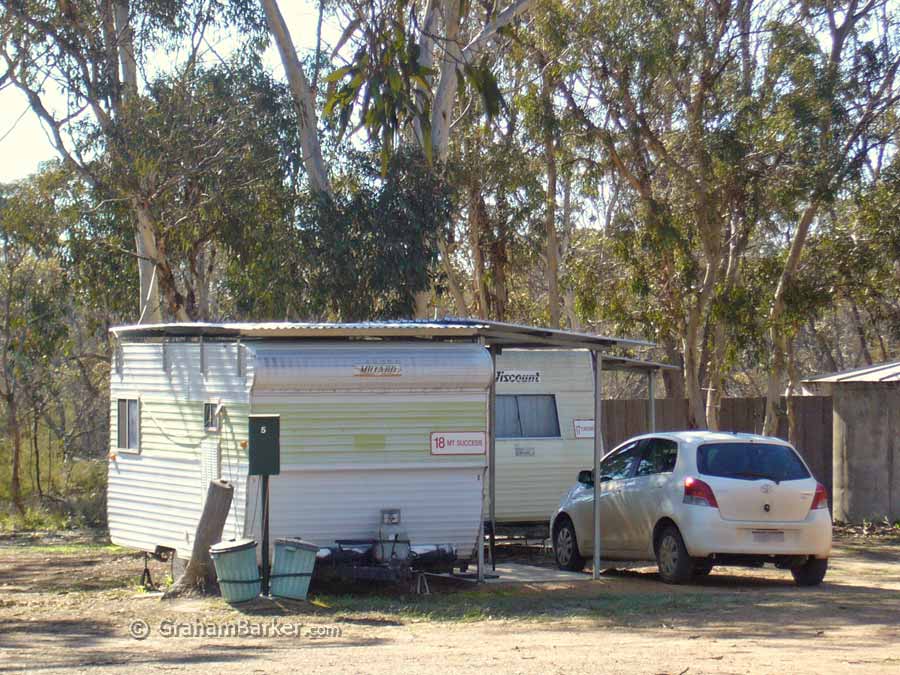 Two of the onsite caravans

On another trip I stayed with friends in one of the self contained chalets. Like the rammed earth cabins, they are set apart from the rest of the retreat by a bush buffer, so the word "retreat" is very apt. That trip revolved around wildflowers, with much time spent roaming bush tracks looking for exquisite specimens I might never have noticed on my own.

The Stirling Range is a biodiversity hot spot for wildflowers. There are over 1500 varieties in the national park, with about 85 species found nowhere else on earth. In the spring high season from mid August to late October, people come from all over the world to see the amazing and colourful displays. I know that from having stayed there in the spring, and meeting many of them.

Various tours are offered in season so that non-experts like me can be introduced to this distinctive plant life. I went on one, and was dazzled. I can't imagine anyone with any appreciation of the natural world not being impressed with the diversity and artistic designs of the plant life here. Especially in spring, but at any time of year there is plenty of it to enjoy, for anyone who takes the time to look. 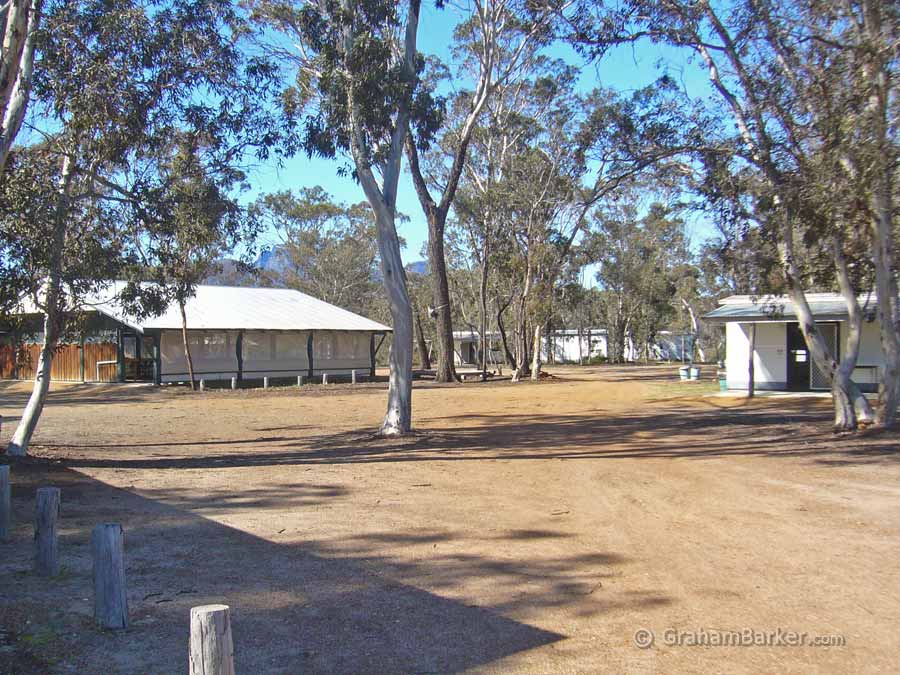 The campers kitchen (left), a cabin (right) ... and lots of space among the trees

On later trips I've stayed in the on-site caravans, of which there are three. Most recently I stayed in a park cabin, which I noticed had reverse cycle air conditioning. I don't bother with heating, but in summer the cooling would be very welcome. Sometimes my stays have been for the purpose of climbing peaks and on a few occasions finding snow. Other times I've just been passing through and wanted a quiet place to stay in beautiful surroundings.

Being a caravan park, you can also park your own caravan or camper van, or pitch a tent. There is a decent amenities block, an open air (but covered) campers kitchen, and the office sells a few basic supplies. Across the road is the Bluff Knoll Cafe which provides meals and take-aways most days of the week. A small roadhouse at Amelup 12km to the North has petrol. Apart from that there is little nearby in the way of shops or services, so I would recommend bringing most of what you need.

The retreat is in the rain shadow of the ranges, and receives a low rainfall. This can be hard to imagine if you arrive in a winter downpour, but most of the year there is little to replenish the water tanks and so water conservation is necessary. However, unlike the strategy common in Tasmania of enforcement through coin operated shower timers, the Stirling Range Retreat staff simply explain the water situation and politely ask that showers be limited to three minutes. This more trusting approach seems to work. 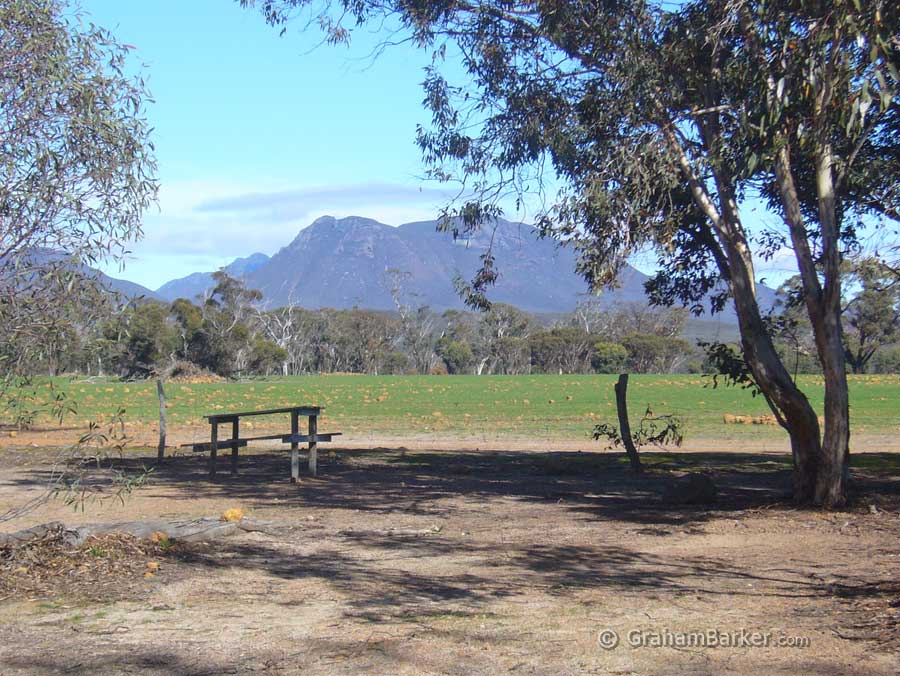 A campsite with a view of Mt Trio

What I enjoy most about the retreat, apart from the mountains it is handy for, is its bush setting. Accommodation is well spaced, there are trees throughout, natural bushland with paths, and the sounds of birdsong can be lovely. Usually it is tranquil … depending on other guests of course, just like any caravan park. All my stays so far have been peaceful.

The trees block the mountain views from within most of the retreat, other than campsites along the fence which have good views of Mt Trio. However a short walk to the airstrip - a paddock with a mowed strip across it - provides clear views in all directions, including to Bluff Knoll, the highest peak. Dawn and dusk are good times for photographing the light on Bluff knoll or Mt Trio, or the clouds rolling off their summits.

Getting to the Stirling Range Retreat takes about an hour from Albany, or about four and a half hours driving from Perth, not counting breaks. Albany is the nearest town with extensive shopping. If approaching from other directions, Mt Barker and Katanning are the nearest towns with city-standard supermarkets suitable for stocking up on supplies.

Whether you go there for the wildflowers, to climb the peaks, or just to soak up the tranquility of the unique bush in the National Park, the Stirling Range Retreat is a great base for exploring the area.

The eastern Stirling Range from just north of the national park 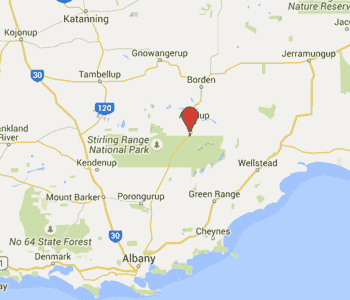