A scenic and sheltered but little-used beach near Albany

Western Australia's south coast has some beautiful beaches, and Misery Beach is one of my favourites despite its completely inappropriate name.

I found this delightful gem when I was exploring the coast near Albany, looking for peaceful secluded beaches sheltered from the prevailing winds and swell. Shelter is important because onshore south-westerlies, or south-easterly sea breezes, can make visiting some southern beaches a blustery sand-blown affair on windy days. Also, exposed ocean waters can be a little rough for swimming (nice looking beaches can have their down sides). 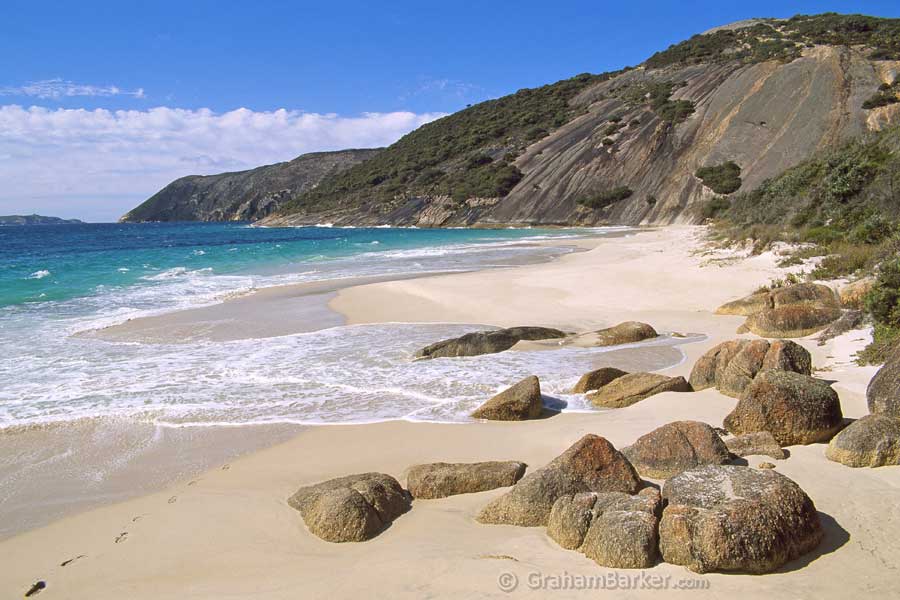 Close examination of a map revealed a short north-facing beach, accessible by gravel road, which looked like it would be sheltered. The name - Misery Beach - aroused my curiosity. What reason could there be for such a name? I had to check it out.

The beach exceeded my expectations. It's a gorgeous stretch of clean sand, not much more than 200 metres long. An impressive granite headland - part of Isthmus Hill - forms one end, while a rocky point marks the other. Thickly vegetated hillside rises behind the beach, sheltering it nicely from the south-east to south-west winds. Even in the stiffest onshore winds, one of the two ends is shielded from the worst of it. Likewise, good swimming can usually be found at one end or the other.

While the beach itself is great, it's the views which make it memorable. The northerly outlook provides gorgeous vistas of King George Sound and its rugged coast and islands. On a clear day the tops of the Stirling Range, 90km away, peek over the coastal hills across the bay. For quiet contemplation amid the soothing sounds of waves, Misery Beach is a hard location to top ... which only makes its name harder to fathom.

A panorama of Misery Beach, middle of photo facing north (click to enlarge)

You might think such a beautiful beach would be well visited, but no, it's always been quiet on my visits. Sometimes I've had it all to myself, and sometimes I've shared it with a few locals, but seldom have I seen sightseers. Requiring a few turn offs up side-tracks may have discouraged traffic, but the absence of any signposting was probably the main factor. One local resident I once spoke to on the beach hinted that any signs directing people to the beach would be quickly removed - so keen were some for Misery Beach to remain obscure.

Unfortunately, Misery Beach was well and truly signposted when I was last there, and even gets a mention in the Lonely Planet Guide to Perth and Western Australia. Now that word is out I don't feel bad about sharing this sandy haven online. To find it, head about 20km out of Albany along Frenchman's Bay Rd. Just before the ex-whaling station, turn right to the Salmon Holes, then left down Murray Rd, then right up the gravel road towards Isthmus Hill car park, where another short track branches left to Misery Beach.

As for the name, the only explanation I've found is that it was named back when the whaling station was in operation, just a few hundred metres to the west. Apparently blood and whale guts used to wash ashore on the beach, which would indeed have made it miserable ... a far cry from the cosy paradise of today. 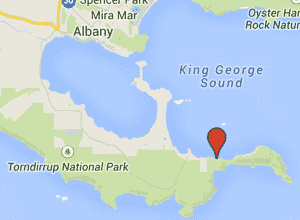