Much of the coastline around Walpole in Western Australia's south is gorgeously rugged, but difficult to get to. One of the few beaches in the area accessible to normal two-wheel-drive vehicles is Conspicuous Beach. As an example of the state's wild and isolated coastal splendour it is hard to beat. 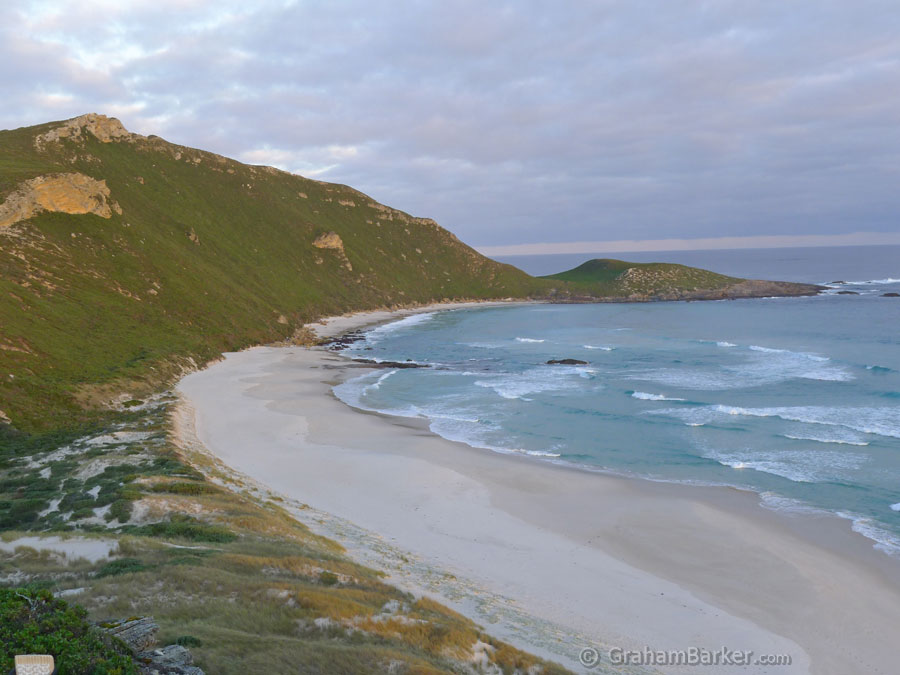 The beach is named after Conspicuous Cliff, a limestone cliff sitting on top of the large headland which dominates the beach and it's little bay. And in case you were wondering: yes, it is conspicuous! Views from the top of this cliff are as extensive as you might expect from a feature which is conspicuous, but thanks to some good visitor facilities you don't need to climb all the way up to appreciate the landscapes.

From Walpole it is a 15 km drive eastward along the main highway to the beach turnoff, then a further 7 km on a good gravel roads to the car park. There you are greeted by a boardwalk, with steps, which takes you down through the sand dunes to the beach.

Branching off of the boardwalk is a path upwards which leads to a lookout on top of a sand hill. While not as high as the cliff which is conspicuous, it is much more accessible, and the views over the beach are excellent. The Bibbulmun Track also connects with this path, so hikers may occasionally pass by. 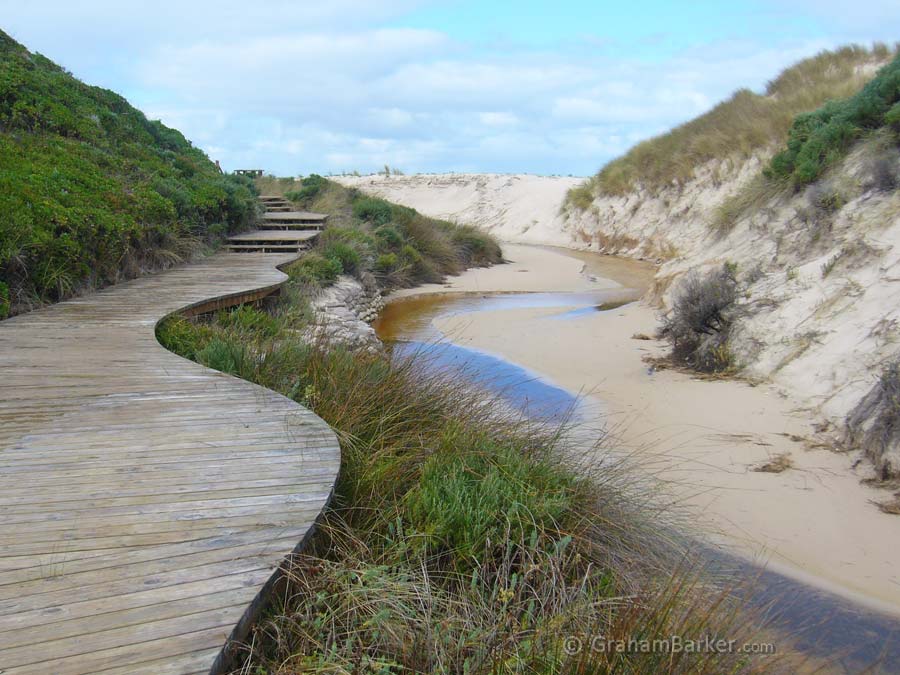 Pathway between car park and beach 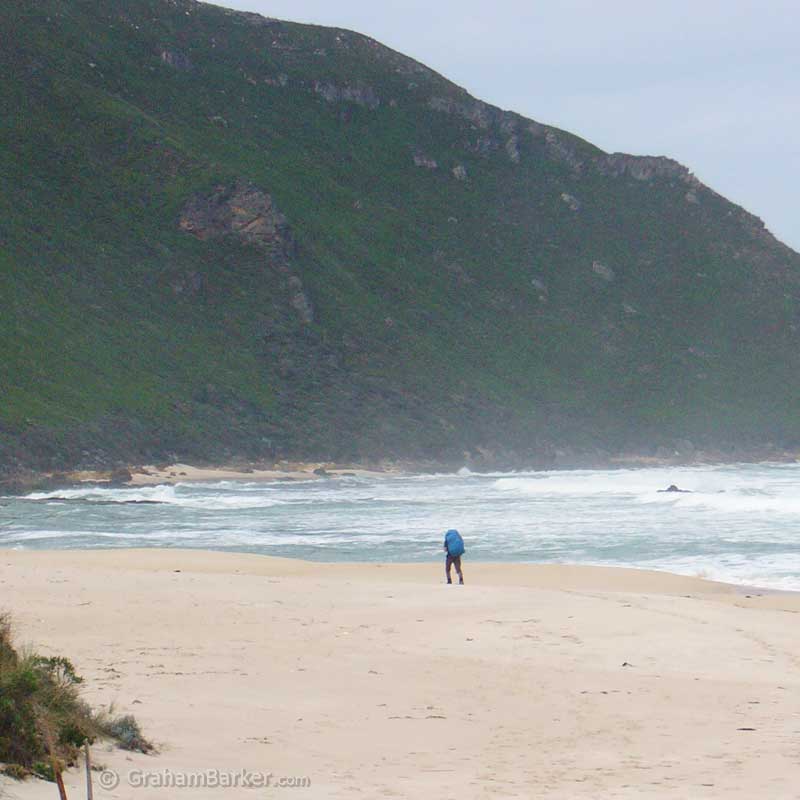 A hiker on the Bibbulmun Track, which crosses the beach

The boardwalk meets the beach close to where a small stream flows across the sand to the sea. Most of the year it is easy enough to step over the stream, but in the wetness of winter careful choice of timing and location may be needed to hop over without getting wet feet. Crossing the stream isn't necessary, however; it just provides access to the right half of the beach, which is slightly less visited. The left half has the cliff and is just as nice.

Conspicuous Beach is undeveloped, and apart from sightseers it is used only by the occasional surfer or fisherman. In other words, it is pretty much as it has been for the thousands of years since sea level rose after the last ice age. If you like coastline which is scenic, unspoiled and pristine (or close to it), then Conspicuous Beach is a spot to be enjoyed.

Swimming is not recommended at this beach; other than the rare calm days it is usually too rough to be considered safe. Surfing and fishing are not without risks either. Like other beaches on Western Australia's south coast which are windswept and exposed to big southern swells, Conspicuous Beach is best enjoyed by walking along it and sitting on it. The scenery, the sounds and sights of crashing waves, and being immersed in the wildness of raw nature are the attractions here.

Visiting Conspicuous Beach fits easily into day trips around the Walpole area, or can be incorporated into journeys between Walpole and Denmark. Even if there is only time for a quick look, visiting this beach can be worthwhile as it provides a taste of the unspoiled coastline which is much harder to access elsewhere in the region. 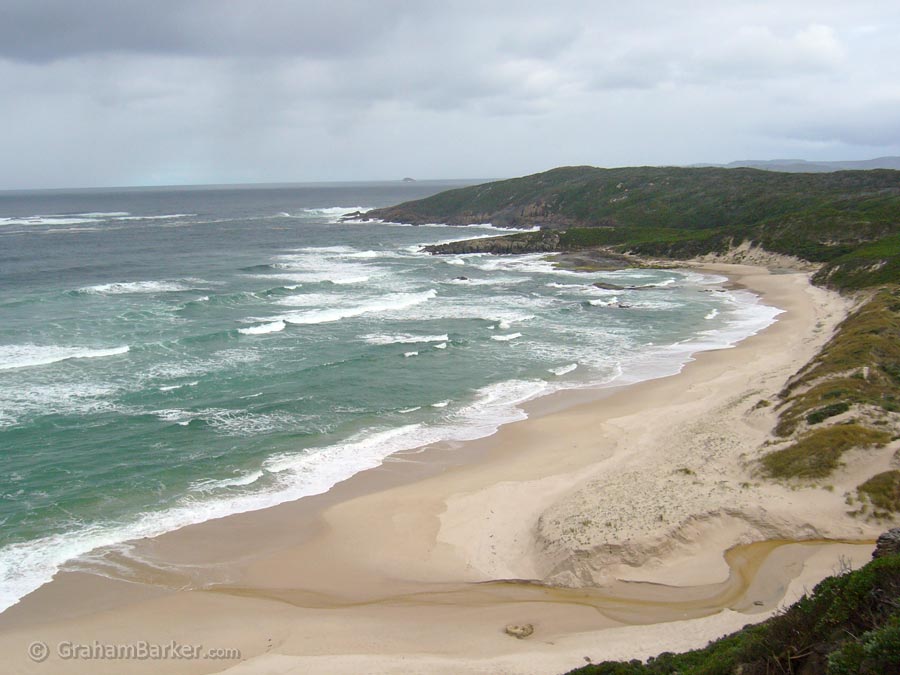 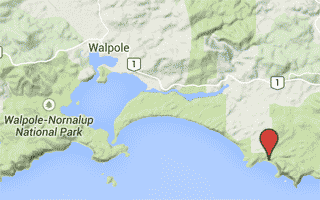