A beautiful wild beach with rocky backdrops near Esperance

When I first visited the Esperance area of Western Australia in the 1990s, I thought Thistle Cove was close to perfection. That is, if you like charming secluded bays with gorgeous beaches and picturesque rocky backdrops. All unspoiled by humans. I returned more recently for a closer look, to see if it really is as lovely as I remembered it.

Returning to fondly remembered places can sometimes lead to disappointment, if the intervening years have embellished memories of the good bits and faded the imperfections. With this thought in mind I drove east from Esperance towards the Cape Le Grand National Park, which contains the jewels in the area's coastal crown.

Thistle Cove is one of several notable bays or beaches in the area - Hellfire Bay and the more famous Lucky Bay being its neighbours. The sealed access road leads to a small parking area, which is all the facilities you'll find there.

There is more than just a beach at Thistle Cove. A path to the right leads down to the sand, but a shorter path to the left leads to some panoramic views and an unusual rock. 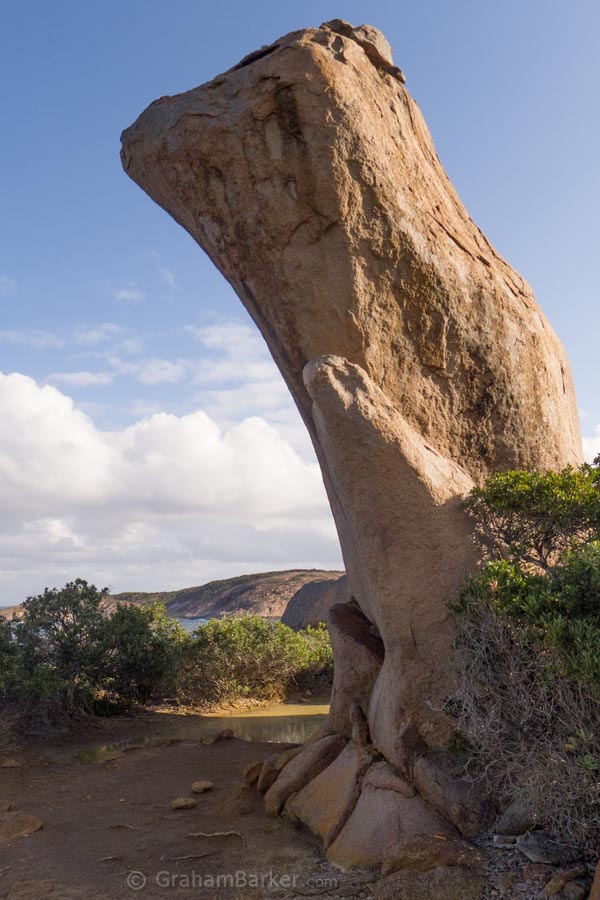 Whistling Rock is a giant bent slab, standing vertically and curved in such a way that ambient sounds are focussed and amplified. I didn't hear any whistling, but standing right next to it does get you some interesting sound effects. Especially if the sea is boisterous and noisy.

A little further on there are lovely views across the cove to nearby headlands. Crashing waves and some unusually shaped rocks make this a great area to go wandering, especially for keen photographers. Just beware of occasional extra-large waves; the life preserver mounted high above the shoreline isn't there for nothing. 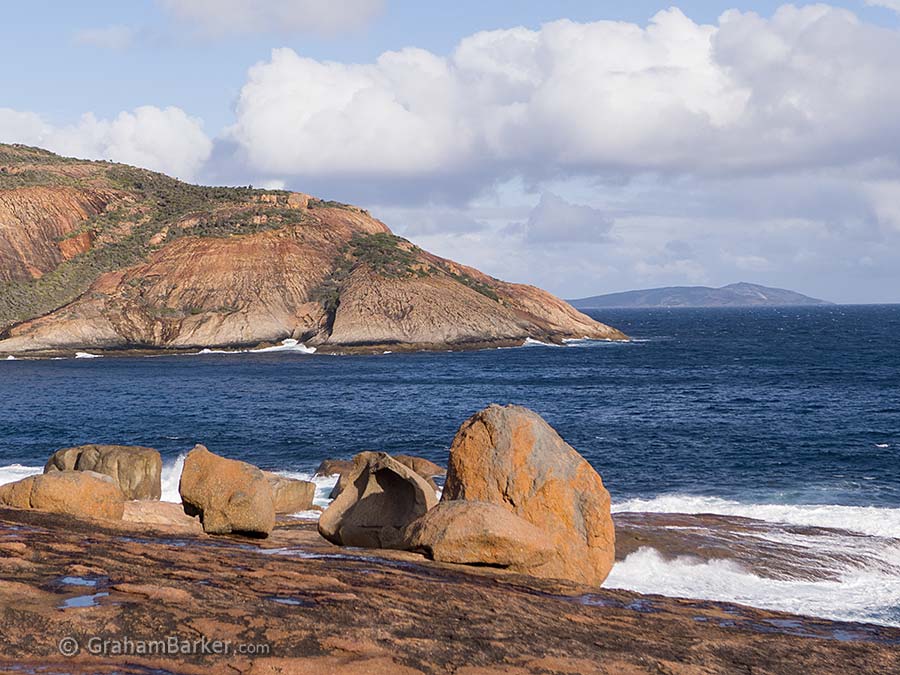 I returned to the car park and headed down the other path to the beach, finding a scene just as beautiful as I remembered it. In fact I think it was even better. My memories were an overall impression, whereas being there allowed all the glorious details and subtleties to be seen afresh.

A huge sloping rock at the start of the beach provides a grandstand view of the Thistle Cove's beach and the sculptured granite hills beyond. It is a great spot for photos, or just to sit and take in the view. 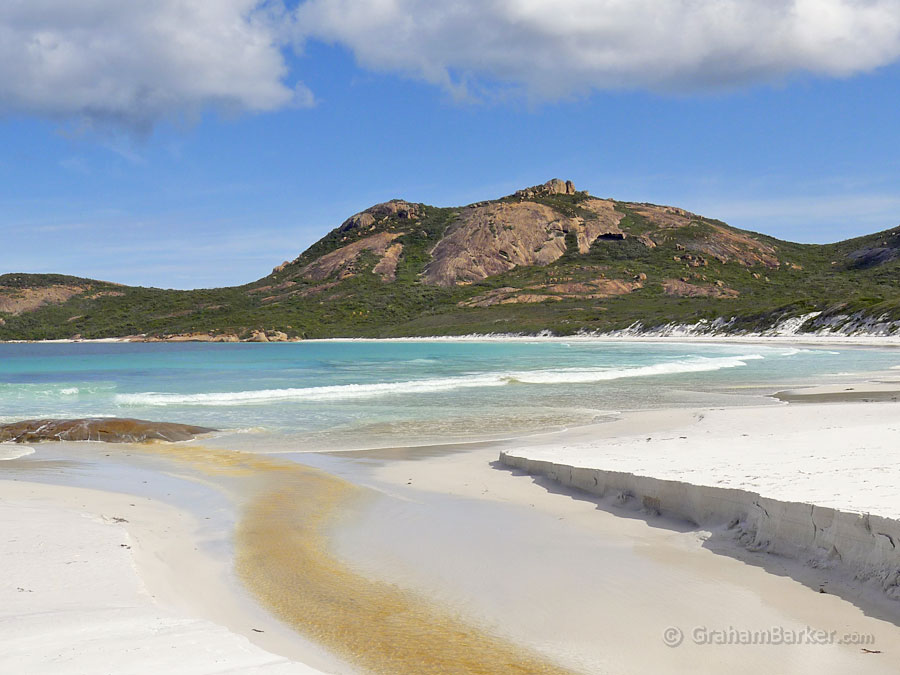 A small creek flows across the sand close to where the beach begins. When it flows well in the wetter months it can act as a small barrier, discouraging many visitors from walking along the beach beyond it. This works in favour of those who do hop across - the risk of damp shoes is rewarded with a beach that is less frequented than its popular neighbours.

It was this fresh creek water that led to the naming of the cove. When explorer Matthew Flinders did the first detailed survey along this coast (by non-Aboriginal people) in 1802, some much-needed fresh water was found here. Flinders named it after John Thistle, master of the ship which found the waters flowing across the beach, and the small lake it came from.

A walk along the beach reveals different perspectives of the cove, and makes more apparent the unspoiled and wild nature of this coastline. At the end of the beach a narrow trail heads up over a small rocky rise to another much smaller beach. It isn't far, but provides very different views from those at the car park end. 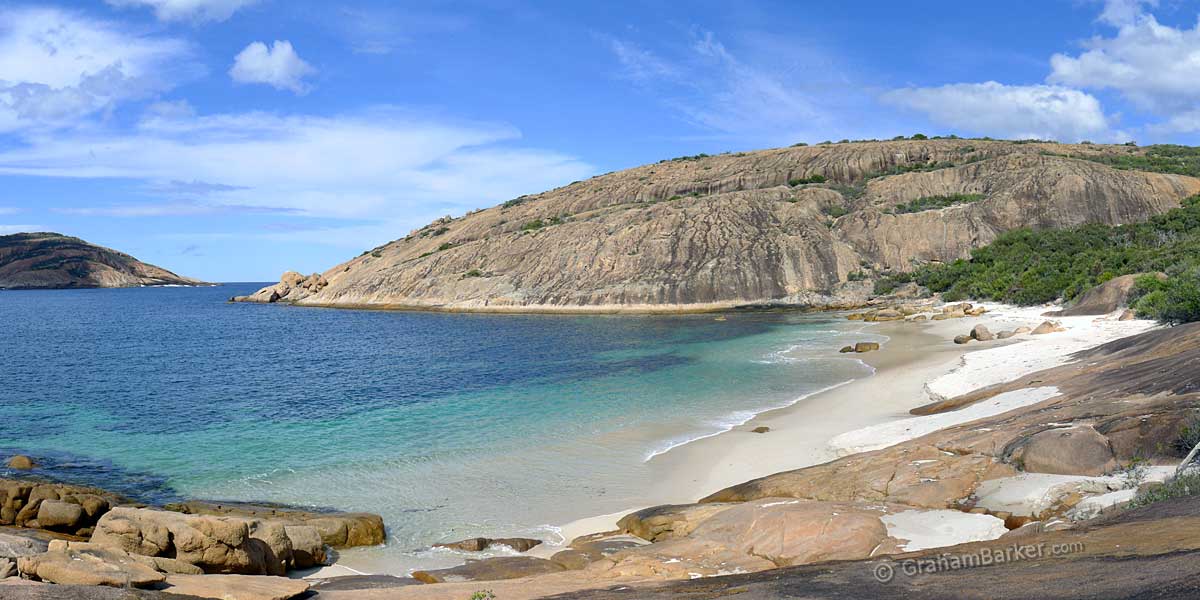 Western end, beyond the beach walk

One of my favourite travel tips is the idea of return visits - seeing a place on multiple occasions, in different weather and circumstances. I was only in the area for a week but visited Thistle Cove on three separate days, and enjoyed appreciating it in different ways each time.

The first visit was windy with passing showers; Whistling Rock was at its best, and despite being in a cove, the sea was smashing onto rocks very impressively. Next time the breeze was more gentle and perfect for a beach walk. The last visit was sunny with no wind and a gentle sea - despite being winter I was tempted to go in for a swim. Thistle Cove is gorgeous in any conditions, but visiting in different weather can only enhance the experience of it.

I mentioned a lack of facilities at Thistle Cove, but there is a lone picnic table bolted to the ground near Whistling Rock. The prominent and exposed spot makes it unpleasant in wet and windy weather, but in good weather it has commanding views and is a delightful place to sit and eat lunch. I tried it out, just to be sure.

The beaches and coast around Esperance are considered by many to be the best in Australia. I hesitate to make a judgement, because I've seen a lot of stunning beaches in other parts of Australia's immense coastline, and what constitutes a great beach is very subjective anyway.

But if you like your beaches wild, remote, undeveloped and uncrowded - yet accessible in normal two-wheel-drive vehicles - then the Esperance coast is of gold standard. Gold of the highest purity. And Thistle Cove, in my opinion, is one of the highlights. 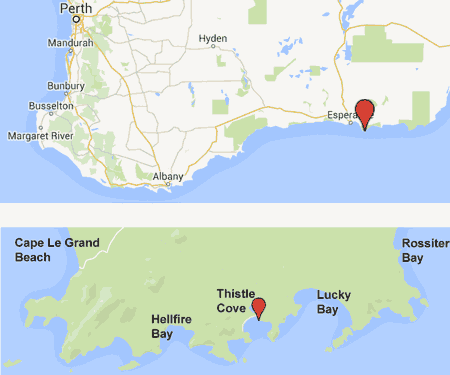