Scenic flights in a class of their own, across snowcapped wilderness to a spectacular fiord

In a country packed with gorgeous scenery and enterprising people, it is not surprising that New Zealand has many scenic flights to offer its visitors. Over a number of visits I've indulged in a few of them, and my favourite would have to be the awesome flight to Milford Sound from either Queenstown or Wanaka (I've flown there from both). On top of the grandeur of Milford Sound, you get a supremely stunning journey across the wilderness of rugged snowcapped peaks of the South West New Zealand world heritage area. And because the flights only operate when Milford Sound has good weather, good views are guaranteed. If I were to live my life again and could only choose one scenic flight, this would be it. 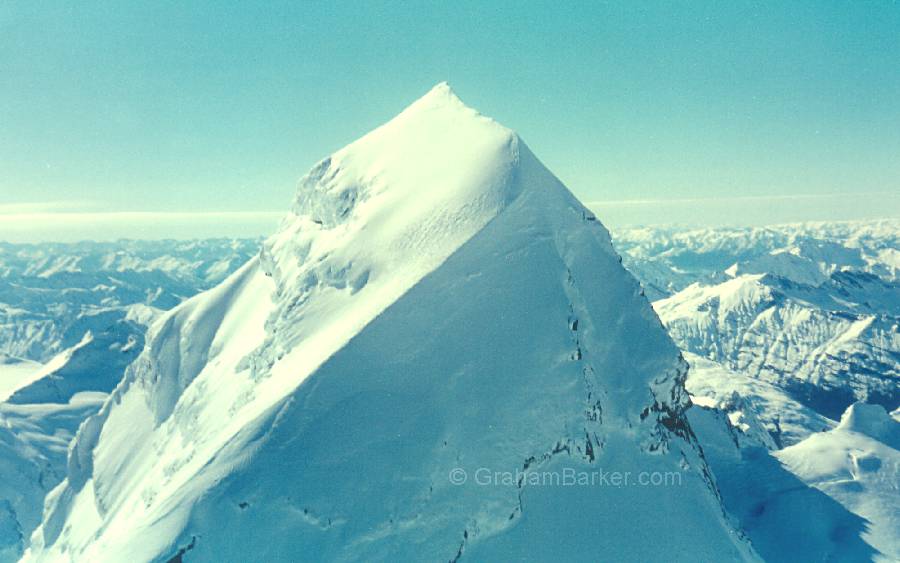 On my very first trip to New Zealand, I visited Milford Sound by bus and was very impressed. So much so, that a few weeks later when I was lingering in Queenstown, I decided to go there again - by air. It felt a little extravagant, but once I had experienced just how awesome the flight was, I had no regrets.

The flight from Queenstown passed over Skippers Canyon then through a gorgeous array of snowcapped peaks on it's way to Milford, in time for a boat cruise up and down it. The return flight featured the incredible 580m tall Sutherland Falls and also Lake Wakatipu on the way back. I may not have walked the Milford Track (yet), but I got to fly over parts of it and see the landscape which draws so many walkers.

On a later trip, I indulged in another scenic flight to Milford Sound, this time from Wanaka. It too was awesome, and is the subject of the video further down this page. After crossing Lake Wanaka, the flight went past the Treble Cone ski area, up the Matukituki valley and past the Matterhorn-like Mt Aspiring at close range. It then crossed snowy peaks and forested valleys on its way to Milford Sound, entering it from the sea as all flights seem to. Following another awesome boat cruise on the sound, the return journey crossed the Dart River valley then back across to Lake Wanaka. My flight from Wanaka didn't return via Sutherland Falls, but some do. 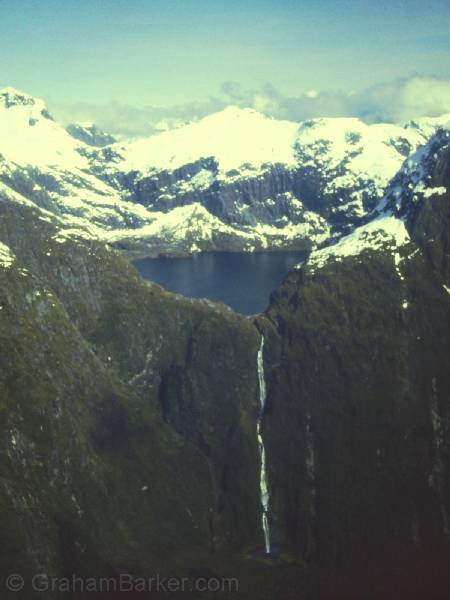 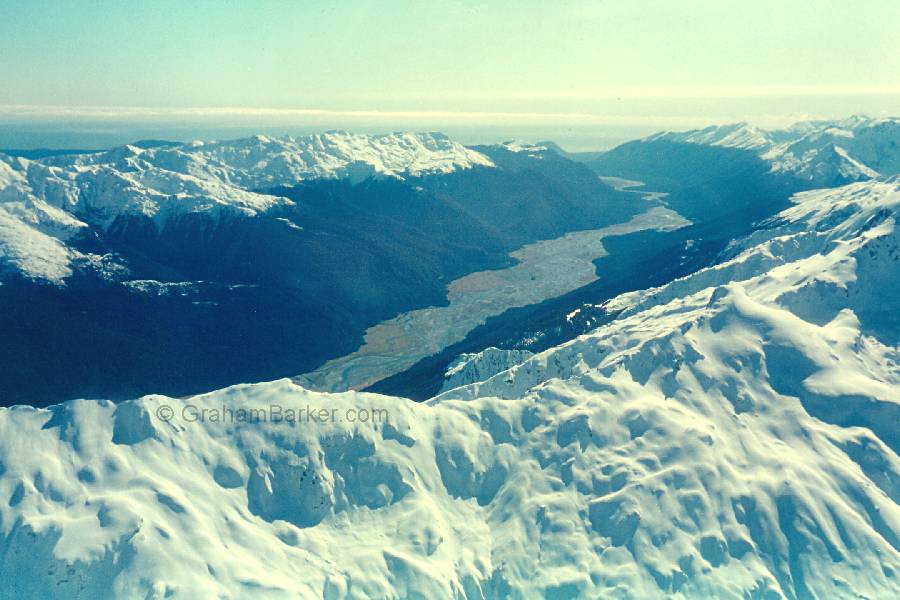 As for which is better ... I can't choose. Apart from the differences mentioned above, the different flights cross similarly beguiling scenery on routes which largely overlap towards the Milford Sound end. Most flights leave from Queenstown, but this reflects the tourist numbers there, rather than any scenic advantage over Wanaka.

The deciding factor may be the weather. Flights only operate when the weather at Milford Sound is good and clear, and having seen the terrain they fly through, I can understand why. Landing at a tiny airstrip hemmed in by towering mountains is best done when the pilot can see what lies ahead! If you're passing through Queenstown and Wanaka and want to do the flight, I would suggest grabbing the first good-weather opportunity that comes along, regardless of which town you're in at the time. Either one is good. 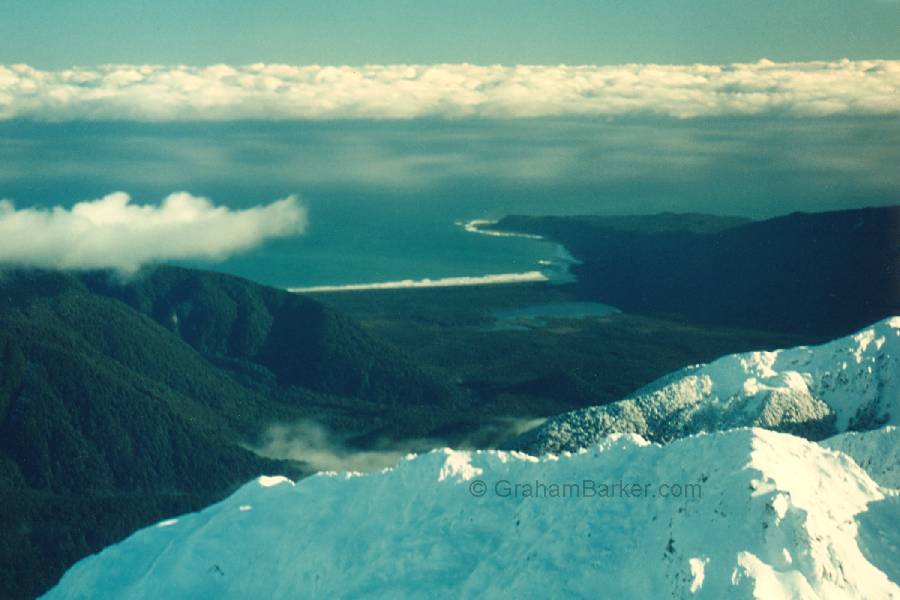 Martins Bay on the west coast

Wherever your starting point, most operators offer flights which include a boat cruise on Milford Sound. This slow sea-level journey nicely complements the drama of the flight into it. If you're not going to Milford Sound by road, or tried to but were kept out by road closures, the flight allows you to see - in good weather - something not to be missed. "Must-see destination" is a tourist cliche I prefer to avoid, but it really does apply to the boat trip up Milford Sound.

If you've already seen Milford by boat ... well, most people I've met who have done it would happily do it again. I've cruised up the majestic fiord five times, and wouldn't hesitate to do it again ... and again.

Another good point about scenic flights to Milford Sound is the size of the aircraft used. They are small, in most cases giving everyone a window seat and not a bad view out of the opposite side too. The only downside is the cost, but then nothing involving aircraft in New Zealand is cheap. But if you're in New Zealand on a once in a lifetime trip and want to experience superlative kiwi scenery at its best, this may be the only scenic flight you need to do. 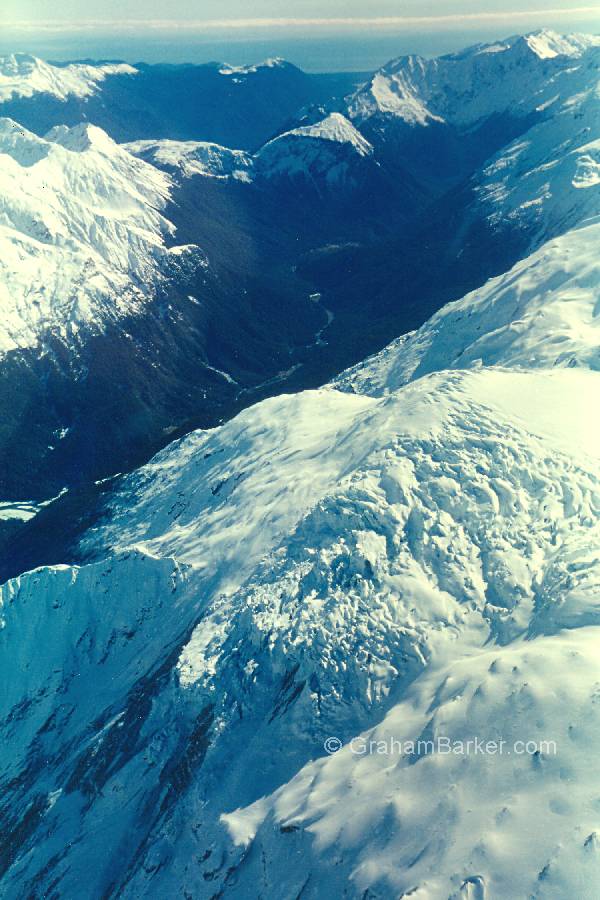 This video is of a flight from Wanaka to Milford Sound in winter, as viewed from the front seat next to the pilot. It passes Lake Wanaka and the Treble Cone ski area, goes up the Matukituki Valley, past Mt Aspiring and the Olivine Ice plateau, over a wilderness of snowcapped peaks and forested valleys, before entering Milford Sound from the sea and landing at the tiny airstrip at the other end. Music: "Scene of the swans" from Swan Lake by Tchaikovsky.

This list of companies offering Milford Sound flights is a starting point ... but it may not be complete because the operators are numerous and subject to change. I suggest anyone planning a trip should do a web search for "milford sound flights" to get all the latest options.