I often like to visit places with odd or interesting names, and this applies to roads too. One such road I just had to investigate was the Pig Route (or the Pig Root) in the South Island of New Zealand. How did it get such a name, and what do pigs have to do with it?

The name first aroused my curiosity in 1995 when I kept hearing it on the radio, during reports on road conditions. During that very snowy winter it was often reported as being treacherous or closed due to snow. I wasn’t able to drive there that year, but on a subsequent trip I was finally able to explore this route I had heard of so much.

State Highway 85 runs from Palmerston, on the coast north of Dunedin, inland to Alexandra which is on the route between Dunedin and Queenstown. The name "Pig Route" applies to the section of SH85 between Palmerston and Ranfurly. This is where the road crosses over some mountains before descending to the Maniototo high plains .. a high road, well positioned to attract snow and bad weather.

Before setting out, I asked at a visitor centre where the name came from. Whoever I spoke to thought it might be because it was a "pig of a route" back in the old days, when miners traversed the route with horses and carts to get to the goldfields of Central Otago.

Later on I learned that the slippery consistency of the clay on the hills reminded the miners of the muck in a pig root - the mud that pigs root around in. That would account for the other variation of the name - the Pig Root.

Heading inland, the road climbs gradually at first, then more steeply. It was easy to imagine miners with loaded carts slipping in the soggy ground on some of the steep sections. Fortunately for modern travellers, the route has long since been sealed and is now an easy drive. Weather permitting, of course. With ice or snow on the road it can still be treacherous.

On my drive the road was clear, it being a mild spell ahead of the next cold front. Yet there was plenty of snow on the higher sections away from the road, hinting at what it could be like. I stopped briefly at a memorial to miners who used this route long ago, and pondered what the journey would have been like without a road.

Over a crest on the high point, I passed a sign informing me I had entered Central Otago. From there, the descent to the Maniototo plains was deliciously scenic. Steep drops and curves which were a pleasure to drive, plus the snow covered Kakanui Mountains looming beyond, made it a very enjoyable road to drive. I was so absorbed in the journey I had trouble remembering to take photos.

The road eventually levels out and the small town of Ranfurly is reached. There ends the Pig Route. In icy or snowy conditions it could still be a pig of a route. But on a dry surface in good weather ... a delightful and scenic road to drive. 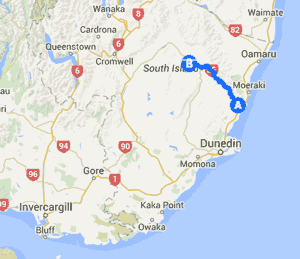 See footer for links to interactive maps
Short link for this page: rdu.pw/242